The CarbonPro box is not just ligher, tipping the scales at 26 kilograms less than a conventional box, but it’s more durable since it’s resistant to both dents and corrosion.

The GMC brand has been known for making premium trucks for many years and they’ve completely redesigned the Sierra for 2019, taking it further upmarket and developing features that modern truck buyers demand.

As with all modern full size pickups, the Sierra has gone on a bit of a diet, weighing in at roughly 200 kilograms lighter than the current model, but how GMC has gone about its redesign is rather clever.

Through the application of different grades of steel and the thoughtful use of aluminum, the new Sierra is not just lighter, but just as durable as it was before. Steel is used throughout the truck’s construction, however, aluminum is used for the doors, hood, and tailgate.

Although not initially available on Sierra, owners will also be able to specify the industry’s first carbon fibre pickup box shortly after the truck’s introduction. The CarbonPro box is not just ligher, tipping the scales at 26 kilograms less than a conventional box, but it’s more durable since it’s resistant to both dents and corrosion. 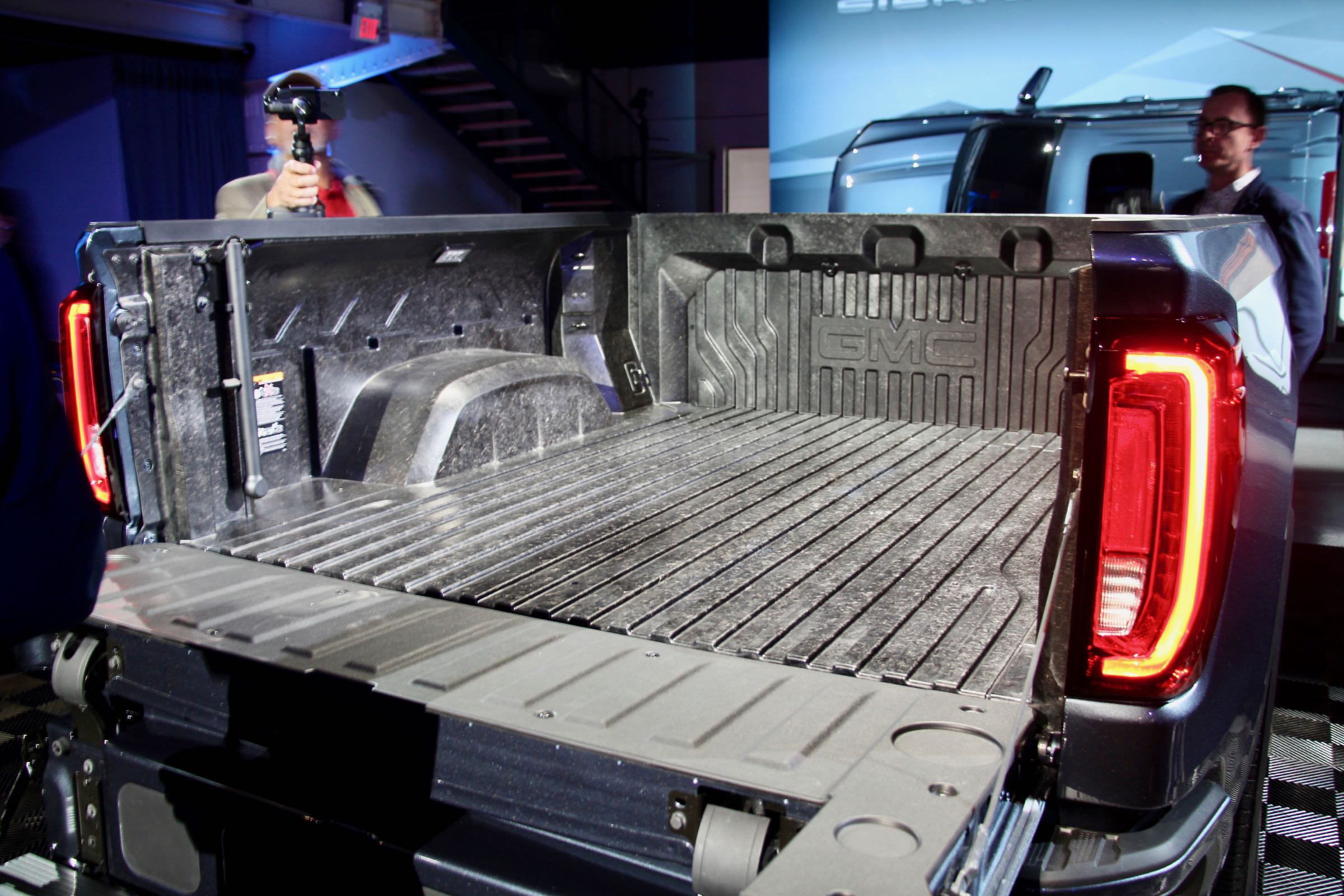 The exterior styling is all GMC of course, with its massive grille, familiar Sierra visage, and general good looks, but the new truck is slightly larger in every dimension. While the styling is not a real departure from the previous model, the exterior details make the Sierra a very compelling choice for a full size pickup.

A few years ago, Ford introduced their tailgate with a built-in step, but GMC’s MultiPro takes tailgating to an entirely new level. With six separate functions in total, the MultiPro offers not just a step, but easier access to the bed, as well as a workstation mode.

That easier access to the bed comes by way of the tailgate having a tailgate of its own, so instead of dropping the entire tailgate, you can simply lower the small, upper tailgate when needed. Designed for ease of use as well as true tailgating, it’ll support 170 kilograms.

The new Sierra’s beds are significantly larger than before and GMC says they offer the most cargo capacity in the class. The rear bumper includes outboard steps, similar to those found on other trucks. 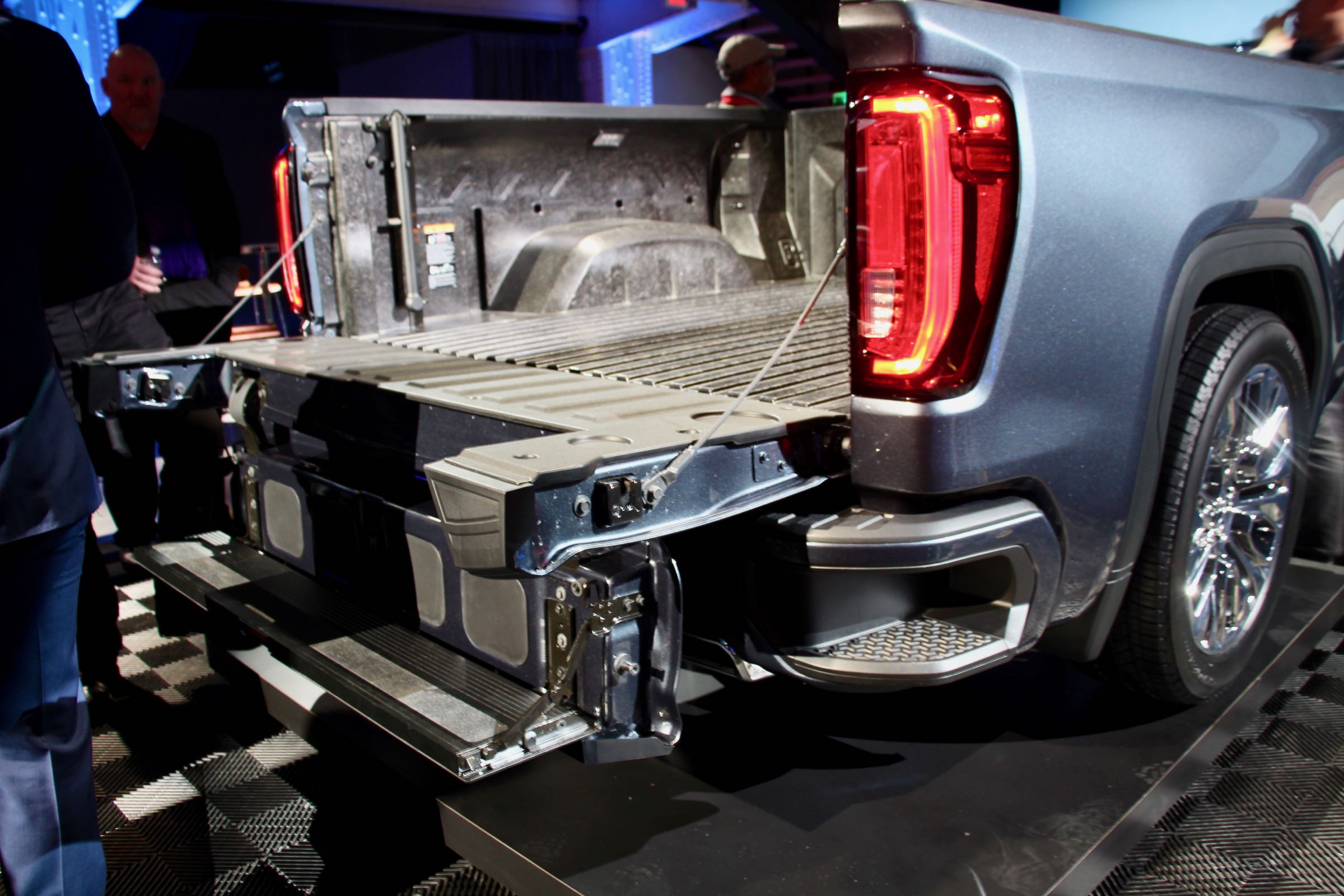 GMC has taken a comprehensive approach to trailering with a host of new features, including a smartphone app designed to make trailering easier than ever. Coupled with the camera, the Hitch Guidance system helps the driver guide the hitch to the trailer and even sets the parking brake to make dropping the trailer onto the hitch a snap.

The most useful features of the system are the trailer light test, the app’s pre-trip checklist, trailer electrical diagnostics, and a trailer theft feature that notifies you via OnStar if your trailer becomes disconnected from your Sierra without authorization.

GMC announced three available engine choices at launch. There are the venerable 5.3- and 6.2-litre V8s, plus a turbocharged, 3.0-litre in-line six-cylinder diesel engine. The gasoline engines include a dynamic cylinder deactivation system that permits any combination of cylinders to be shut off, depending on load and other driving conditions.

Both V8s also feature stop-start technology, helpful for those long red lights in the suburbs. At launch, GMC indicated that the big 6.2-litre V8 and the diesel engines get paired with GM’s 10-speed automatic transmission. No mention of the 5.3-litre V8’s transmission, however.

The Sierra Denali is going more upscale than ever before, in terms of both functional and premium features, and positions itself as the luxury pickup of choice, well above its cousin from Chevrolet and its other competitors.

The design theme for the Denali’s new interior revolves around premium leather, authentic wood trim, and aluminum—and GMC says that Sierra has the most passenger volume in the segment.

With an all-new truck comes an all-new infotainment unit with a revised interface, a faster processor, as well as the expected Apple Car Play and Android Auto connectivity. What’s surprising, however, is a cutting edge, colour head’s up display, a feature normally reserved for performance cars. Historically, GM does the best HUDs in the business and undoubtedly this new feature will be welcomed by Sierra Denali owners. 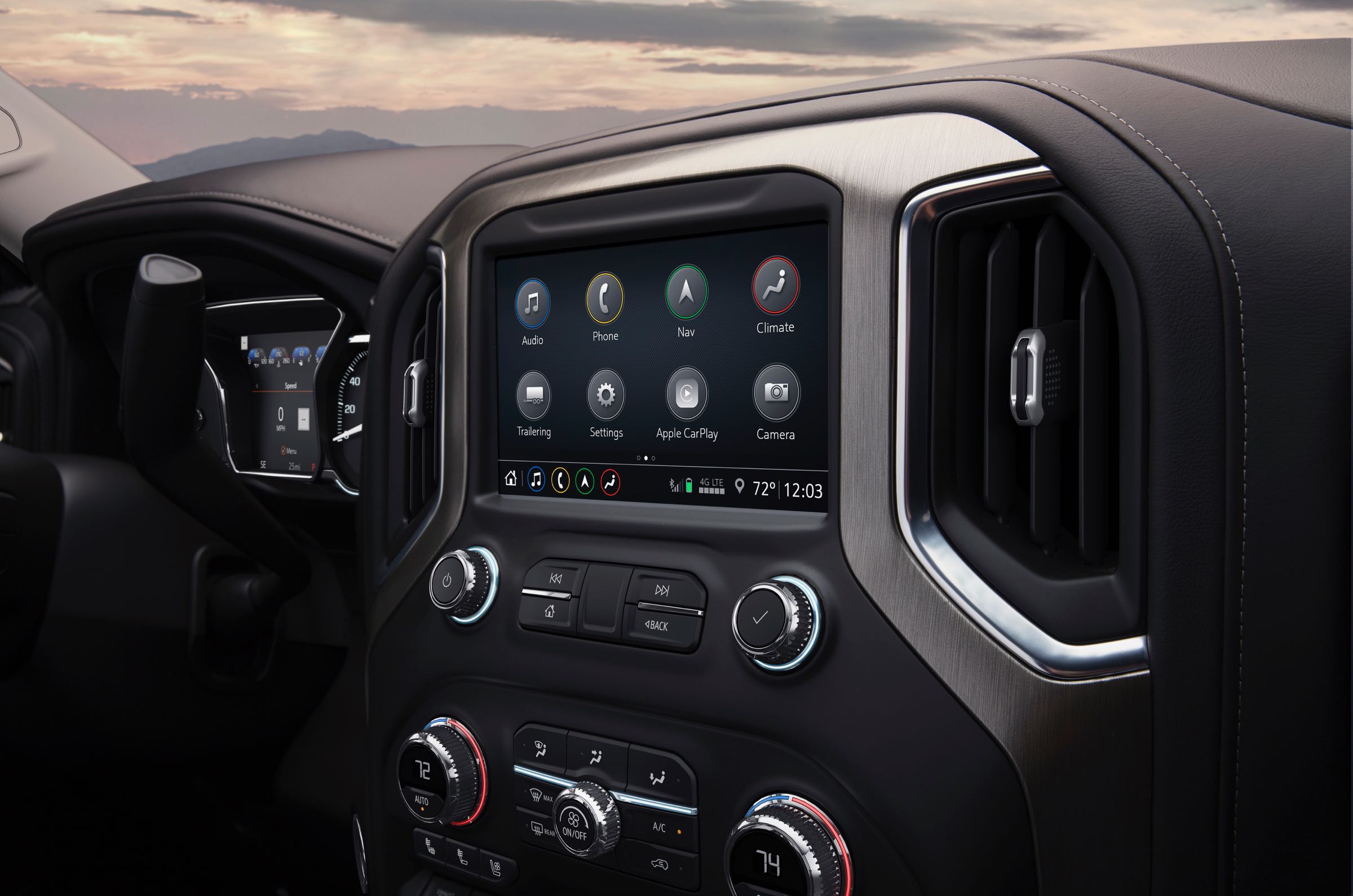 Taking a lesson from other brands under the General Motors umbrella, the Sierra Denali includes a rear view mirror camera, rather than simply a conventional mirror, that offers much more versatility and visibility.

Sierra Denali includes adaptive ride control, which can adjust the dampers in as little as two milliseconds, and is said to improve both ride comfort and control.

Visually, the Sierra Denali model distinguishes itself from not just the Sierra, but all other pickups with its LED headlamps, taillamps, and daytime running lights. Massive 22-inch wheels are standard on both Sierra Denali and the SLT models.

Indeed, the SLT will be Sierra’s volume model, however, the Sierra Denali raises the bar for premium pickups. Its host of luxury features and new technology makes this new GMC a formidable choice among pickups.

The 2019 GMC Sierra goes on sale this fall with pricing to be announced later in the year. 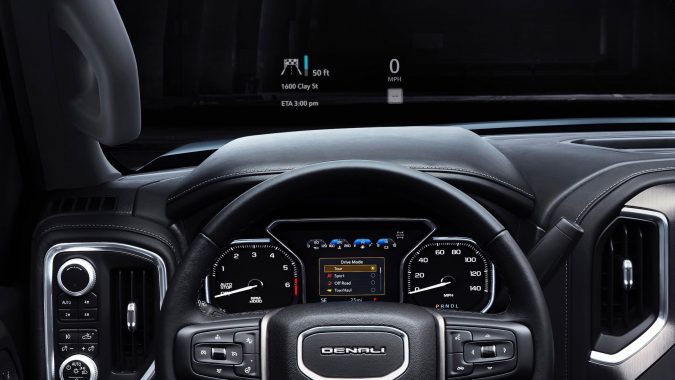 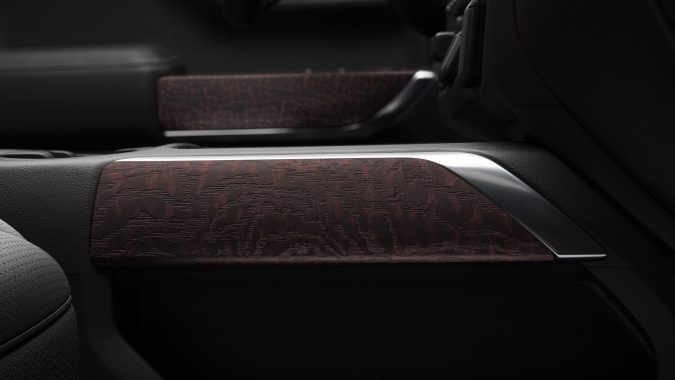 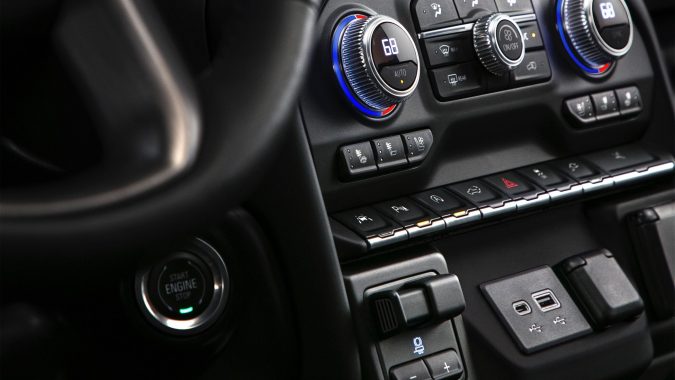 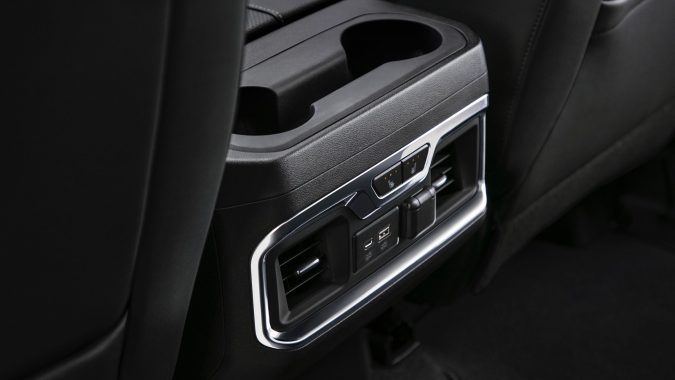 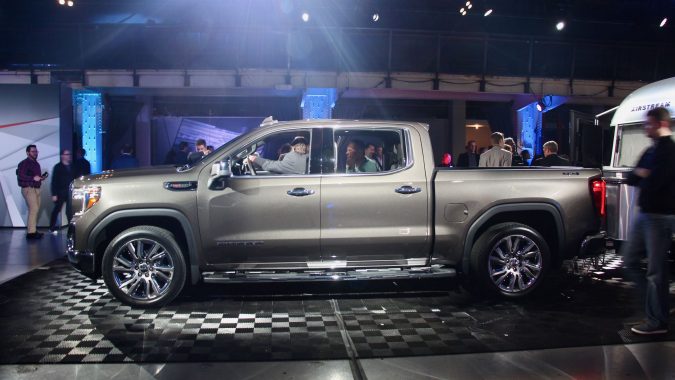 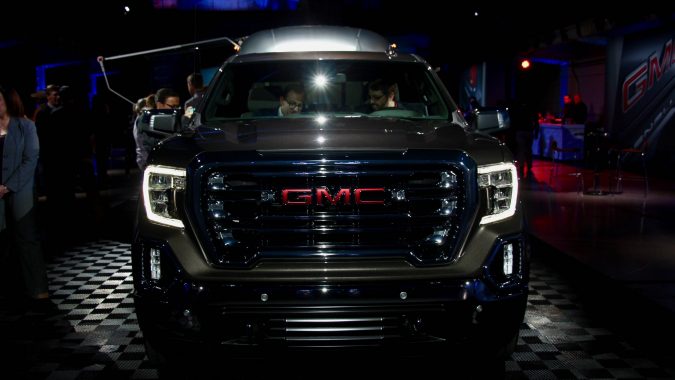 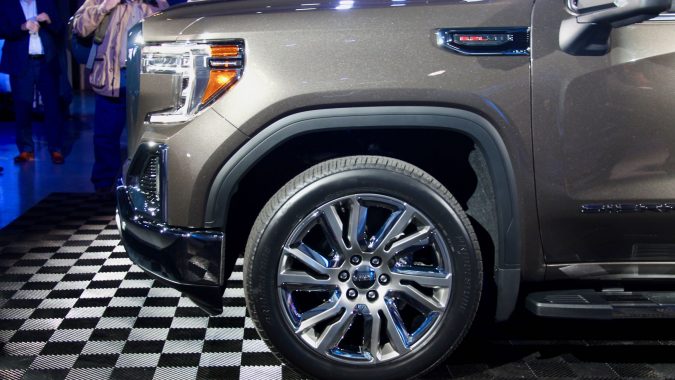