Fuel-cell vehicles caught in a Catch-22

Consumers won’t buy the cars until there’s access to fuelling stations and the price for one drops.

After five weeks, he’s impressed: The Tucson has plenty of power and a top speed of 160 kilometres an hour, he notes. With little engine vibration, it’s relaxing to drive — “so smooth, it feels like I’m always coasting.”

A refuel with hydrogen takes just three minutes, costs about $40, and provides 500 kilometres of driving — enough to meet the needs of a single-car family.

It might be except for a big hitch: There’s just one hydrogen-fuelling station in Ontario. It’s at Hydrogenics, a Mississauga fuel-cell company that Cargnelli co-founded two decades ago. Company staff put it together so Hyundai would make the vehicle available on a three-year lease at $499 per month.

That means a trip to Barrie is fine, but he wouldn’t make it to Windsor and back. And the promise of a single car meeting all driving needs — which Cargnelli and many others say is essential for mass-market sales — can’t be met.

Fuel-cell technology has been the coming thing for years; usually showing far more promise than performance, and appearing to be eclipsed by battery power.

Part of the problem was psychological: Many people doubted that cars — as well as trucks, trains, boats and aircraft — could be propelled by a reaction that generates electricity from hydrogen and air, and emits only water and a little heat.

Mainly, though, the barriers were practical: Early fuel cells were big, clunky, prone to glitches, and hideously expensive.

The technology now works well, and the version that powers the Tucson is about the same size as the four-cylinder, internal-combustion engine it replaces.

But it’s caught in a Catch-22: Consumers won’t buy fuel-cell vehicles until fuelling stations are available, and costs come down. But there’s no business case for installing fuelling stations, at about $1 million each, until there are enough vehicles on the road to justify their expense.

And vehicle costs will stay high until there’s enough demand for manufacturers to get into mass production.

California’s government has begun to break the cycle by partially funding fuelling stations. The rest comes from automakers — most notably Hyundai, Honda and Toyota — that have fuel-cell vehicles ready for the consumer market. 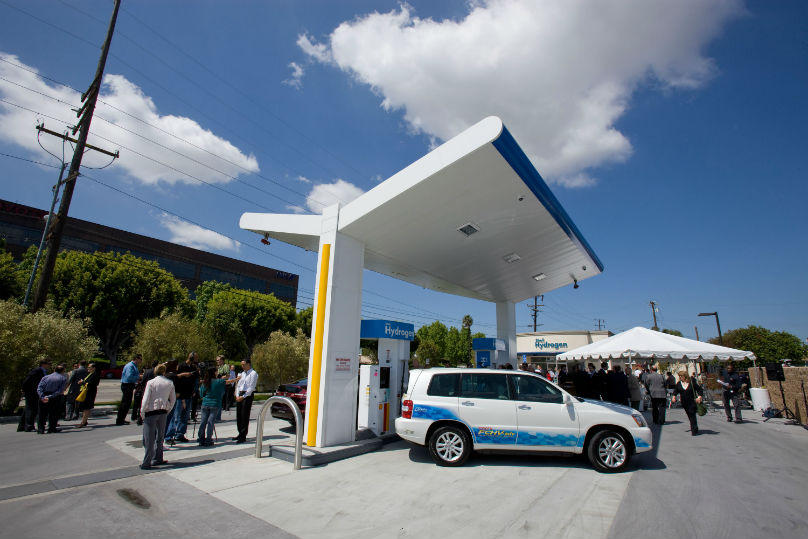 As a result, the state has 80 stations built or under construction; a network that covers the 800 kilometres between San Diego and San Francisco. With that in place, drivers can lease vehicles.

British Columbia is taking small steps in the same direction.

Hyundai and Hydrogenics plan a similar approach for Ontario. They’re forming a coalition with others in the industry to begin discussions with the provincial and federal governments.

The recent federal budget promised $62.5 million over two years for infrastructure for alternative transportation fuels, including electric vehicle charging stations and natural gas and hydrogen refuelling stations. Cargnelli expects most will go to battery chargers but hopes for significant support for hydrogen fuelling.

The group will also talk with Ontario.

“We’re at the starting gate,” he says.

Just how far they have to go was revealed when Cargnelli got his licence for the Tucson. Although the vehicle is emissions-free, he couldn’t get a “green” plate that let lone electric-vehicle drivers use HOV lanes. “There’s no classification for fuel-cell vehicles.”

Next time: Fuel cell and battery-electric, toe to toe.