Designed to be an off-road beast, with all-new features developed to conquer virtually any obstacle or terrain.

In a redemption story that surely ranks with the best Rocky movies, General Motors has morphed the Hummer brand from a purveyor of very fuel-inefficient vehicles that were reviled by the green crowd to one which makes vehicles powered solely by electricity.

But don’t worry, Hummer fans. This new EV pickup from Detroit’s former environmental bad boy packs a promised 1,000 horsepower and enough off-road goodies to take on some of the toughest terrain imaginable. In fact, it would not be a stretch to call the GMC Hummer EV one of GM’s most capable off-road vehicles.

It would seem cleaning up its image hasn’t lessened its swagger.

First, the name. It’ll have not escaped your notice ‘Hummer’ is now a model name under the GMC banner. This is surely in an effort to eliminate the costs of resuscitating an entire brand but still capitalize on the Hummer’s name recognition. Those six letters are sure to enrage bumper-ogling environmentalists with long memories, at least until they learn this pickup runs solely on battery power. 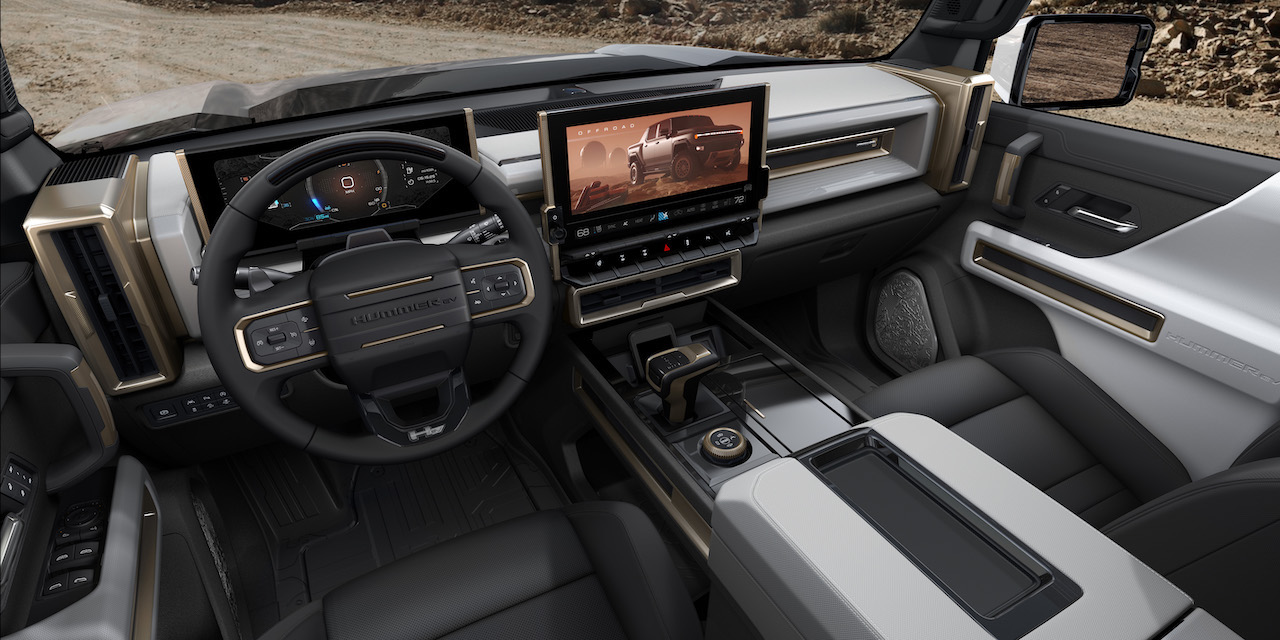 Speaking of power, there’s a lot of it. Hummer EV will use the company’s all-new Ultium family of batteries, deploying a pair of GM’s proprietary EV drive units to make good on the promised 1,000 horsepower. There will be up to three separate motors providing what GM is calling e4WD, meaning this truck should have traction like a cat on carpet. Range of a fully charged battery should be in the neighbourhood of 560km and quick charge stations will replenish about one-quarter of that in less than ten minutes.

In the eyes of many, getting in tune with nature in the old Hummer generally meant getting friendly with the nearest oil well. The 2022 GMC Hummer EV will bring nature closer thanks to open-air driving made possible by removable transparent roof panels that can be stored in the vehicle’s frunk.

Exploring the great outdoors will be made easy thanks to a host of off-road goodies including a so-called CrabWalk four-wheel steering system that, at low speeds, permits all four wheels to steer at the same angle. Underbody steel armour will protect expensive bits including front and rear underbody cameras that will surely help in gnarly off-road situations.

Other treats on this newly enviro-conscious Hummer? Look for the brand’s MultiPro tailgate, a ‘Watts to Freedom’ mode that’ll shove the truck to 100km/h in about 3 seconds (à la Tesla’s Ludicrous mode), and an infotainment screen spanning a vast 13.4 inches. The Hummer EV also cribs Super Cruise from its corporate cousins at Cadillac, providing hands-free driving with automatic lane changing on divided and compatible roads. 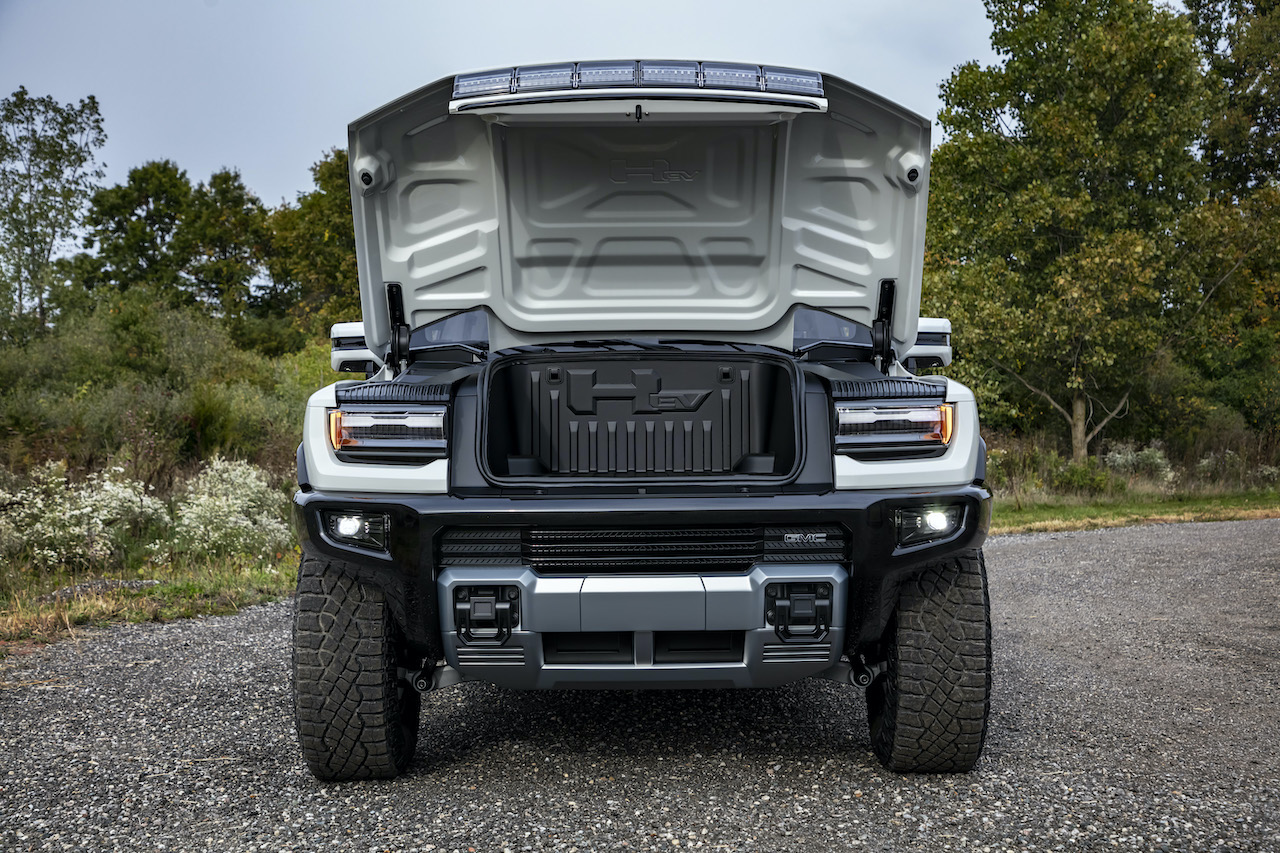 Will all this placate the eco-warriors who were arguably a big piece of the puzzle in scuppering the brand about ten years ago? Perhaps. Utilizing many of the same EV tricks as current (pun intended) industry darling Tesla won’t hurt, nor will the leggy range and quick recharge times. The in-your-face styling might offend a few but most consumers seem to be inured to such gravitas by now after seeing EV trucks like the Rivian R1T and Tesla’s own Cybertruck.

During an exclusive online event for media, GMC engineers confirmed the Hummer EV is not a body-on-frame truck but rather a vehicle that deploys a “brand-new architecture” comprised of upper and lower steel plates at the battery. This provides strength for its independent front and rear suspension gubbins. Despite this, no factory winch will be offered like some other brutish off-road pickups, though head honcho Al Oppenheimer promised a raft of GM accessories which could eventually include a mounting point for a winch.

If the Oppenheimer name sounds familiar, that’s because he was formerly chief engineer for the Chevrolet Camaro. In fact, it was revealed that several of the C8 Corvette team also transitioned to the Hummer EV project, partially explaining why one of the truck’s party pieces is a dose of devastating acceleration.

Interestingly, the marketing team said today they feel the Hummer HV was “not designed to go head-to-head with anything else” given its unique suite of technology and off-road capability. They are aware of and comfortable with other electric pickups that are on the horizon but feel their truck competes in a luxury space where other six-figure toys – not necessarily vehicles – may also reside.

GM remains mum on pricing but expect something well into the six-figure territory for a fully kitted out tri-motor model. At least you’ll have lots of time to save your pennies; initial Canadian availability is set for autumn 2022. 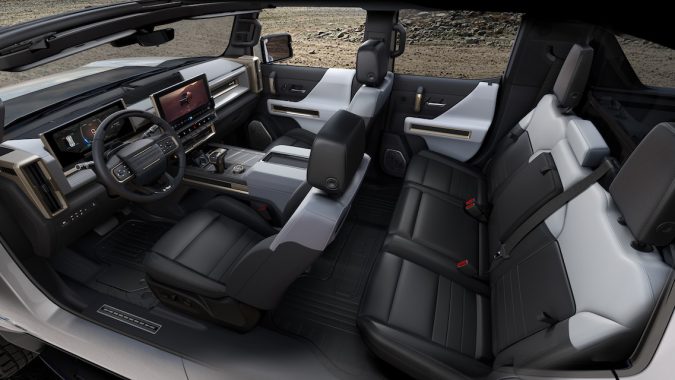 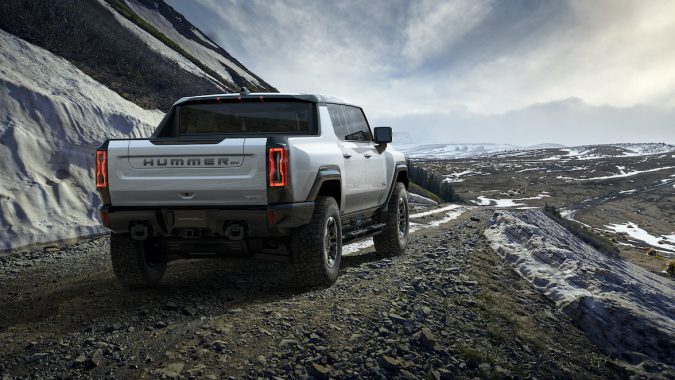