CIAS 2020: Four All-New SUV’s And Crossovers Sure to Turn Heads

Many new vehicles being unveiled at auto shows these days are SUVs and crossovers, and the 2020 Canadian International AutoShow is no exception – and for good reason.

The North American new car market is dominated by SUVs, crossovers and trucks, where they collectively account for roughly 75 percent of sales. These segments remain white-hot and show no signs of slowing down.

As a result, many new SUVs and crossovers will make their Canadian debuts at the 2020 AutoShow, being held at the downtown Metro Toronto Convention Centre. There are so many, in fact, that I don’t have enough space to mention them all. Instead, I’ve chosen to spotlight four all-new models, three of which are of the first-ever variety.

The 2021 Escalade sports new styling inside and out, along with a slew of features, technology and engineering innovations. Among these are an industry-first organic light emitting diode (OLED) display that covers a total of 38 inches, and is made up of three separate screens: a 7.2-inch control panel driver information centre, a 14.2-inch cluster display behind the steering wheel, and a 16.9-inch infotainment screen.

The ’21 Escalade also marks the introduction of AKG as the exclusive audio partner for Caddy’s flagship SUV. The top package is a Studio Reference system with 36 speakers and three amplifiers.

Powering all Escalade models is a 6.2-litre V8 (420 hp / 460 lb-ft.) paired with a 10-speed automatic transmission. The new Escalade is scheduled to go on sale this fall.

As the name would suggest, the Mustang Mach-E is an electrified Mustang in SUV form that will bring high performance and long-range capability when it goes on sale as a 2021 model later this year.

The Mach-E will be available with two battery options (standard and extended range) that will be paired with permanent magnet motors that will drive the rear wheels and all four. Ford has indicated the rear-wheel drive, extended range variant will have an estimated range of 483 km (300 miles).

As for power output, Ford expects the extended range, all-wheel drive Mach-E to produce 332 horsepower and 417 lb-ft. of torque and has said its 0 – 60 mph (97 km/h) should be faster than the base Porsche Macan.

Because it wears the galloping horse badge, the Mach-E will also be offered in two performance grades: GT and GT Performance. Ford expects the GT to have a 0-60 mph time of less than four seconds, which would make it faster than a Porsche Macan Turbo.

Meanwhile, the GT Performance Edition is expected to produce 459 horsepower and 612 lb-ft. of torque, with a blistering 0-60 time in the mid three-second range, which is roughly equivalent to that of a Porsche 911 GTS.

Based on a rear-wheel drive architecture unique to Genesis, the GV80 (arriving in the second half of 2020 as a 2021 model) will be available with two turbocharged engines: a 2.5-litre 4-cylinder and a 3.5-litre V6. Power output numbers haven’t been released, but Genesis has indicated both engines will be paired with an 8-speed automatic transmission and standard all-wheel drive.

From a design perspective, the GV80 shares a family resemblance to the updated full-size G90 sedan. Among the common design cues are the large Crest Grille and Quad Lamp LED headlights.

On the inside, the GV80 features a 14.5-inch split-screen infotainment display, with thin air vents that run across the dashboard. Hard buttons and switches have been kept to a minimum, and a rotary shift controller takes the place of a traditional gear shifter.

The GV80 also comes equipped with Road Active Noise Cancellation (RANC), an industry first, according to Genesis. In real time, RANC analyzes road noise and then uses digital signal processing to generate sound waves of opposite phases in 0.002 second intervals to quiet the cabin.

The first-ever Seltos is a subcompact crossover that slots into Kia’s SUV lineup between the Soul and Sportage and will be offered in both front and all-wheel drive with two engine options when it goes on sale this spring as a 2021 model.

The Seltos sports a rugged design with a prominent Tiger Nose grille and slim LED headlights, which is complimented by a wide stance and 18.3 cm (7.2 inches) of ground clearance. On the inside, the Seltos comes with standard Apple CarPlay, Android Auto and Bluetooth connectivity. A 10.25-inch multimedia screen is also available, as are 8-speaker BOSE audio, heads-up display, heated and cooled front seats and heated rear seats. 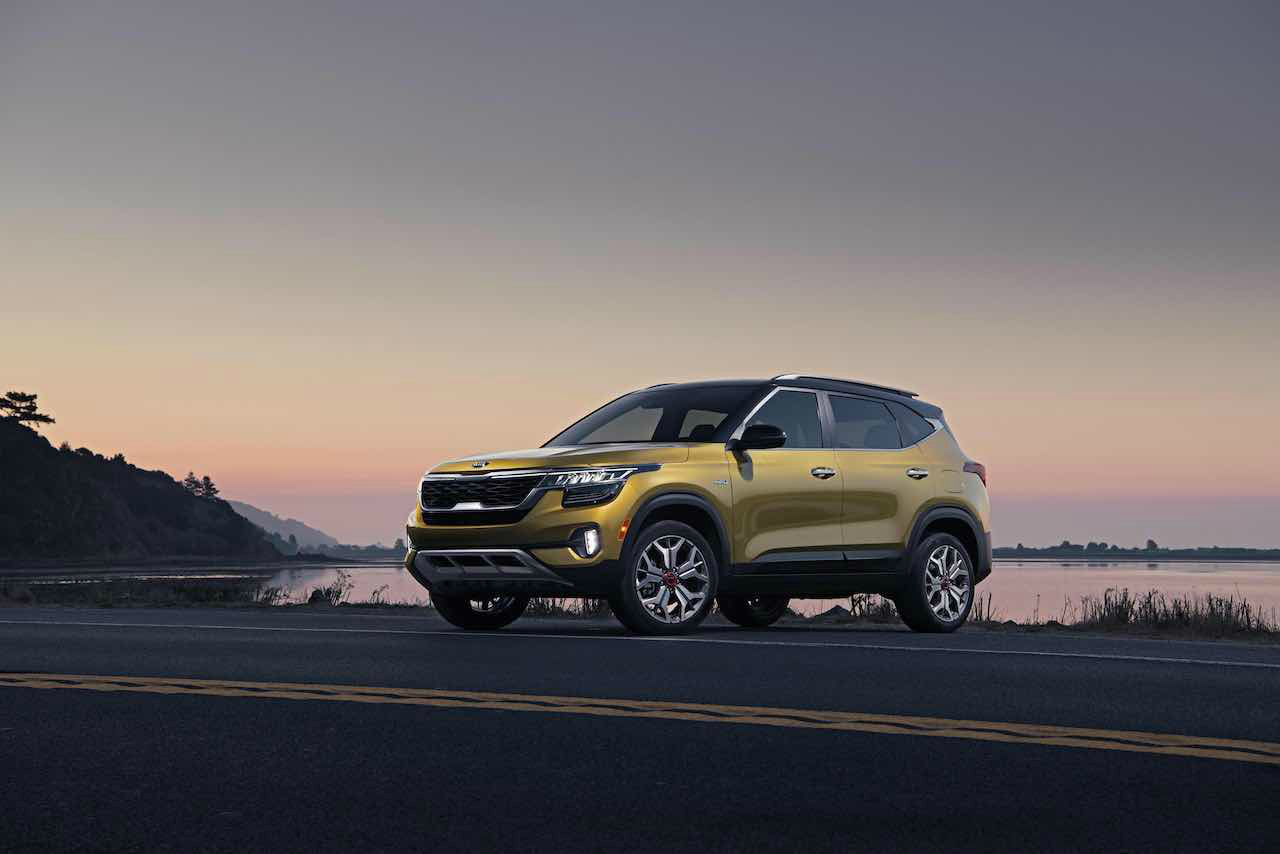