Join the Conversation (0)
Each year in December, Toronto Life magazine publishes a list called the 50 Most Influential Torontonians. Dean Stoneley, president of the Ford Motor Co. of Canada, which employs 7,000 people and is leading the electric vehicle and electric battery revolution in Ontario, came in at No. 42, 36 places behind Dan Levy, who created the TV show Schitt’s Creek.

And despite $1.8 billion pledged to revolutionize the manufacturing of electric vehicles and batteries at a revamped Oakville manufacturing facility that involved negotiations (and money) from the federal government (Navdeep Bains, minister of innovation, science and industry) and Queen’s Park (Vic Fedeli, minister of economic development, job creation and trade), not to forget the president of Unifor, Jerry Dias, Stoneley was the only one of them named to this year’s list.

I might be biased, but in keeping with the green revolution sought by so many of the people who read that magazine, the rescue of much of the automotive industry in this province – in fact, the rescuing of pretty much the entire Ontario economy – seems to me to be more important for inclusion on that list than half the Toronto Raptors, Drake and the ever-present Margaret Attwood and Chrystia Freeland.

In any event, in its mini profile of Stoneley, Toronto Life noted that Ford Canada had produced more than 2.75 million face shields to help in the fight against COVID-19. Naturally, when I had a chat with him the other day, I asked him about that, particularly whether they had managed to sneak a Ford promo onto the shields.

One thing I particularly like about Stoneley – we drove around in a Ford for a video in advance of the Canadian International Auto Show in February – is his sense of humour. “We’re just winding that down,” he said. “But yes, there was a little Ford logo on it. We took the premier (Doug Ford) down to Windsor and he enjoyed seeing that,” he added, laughing. 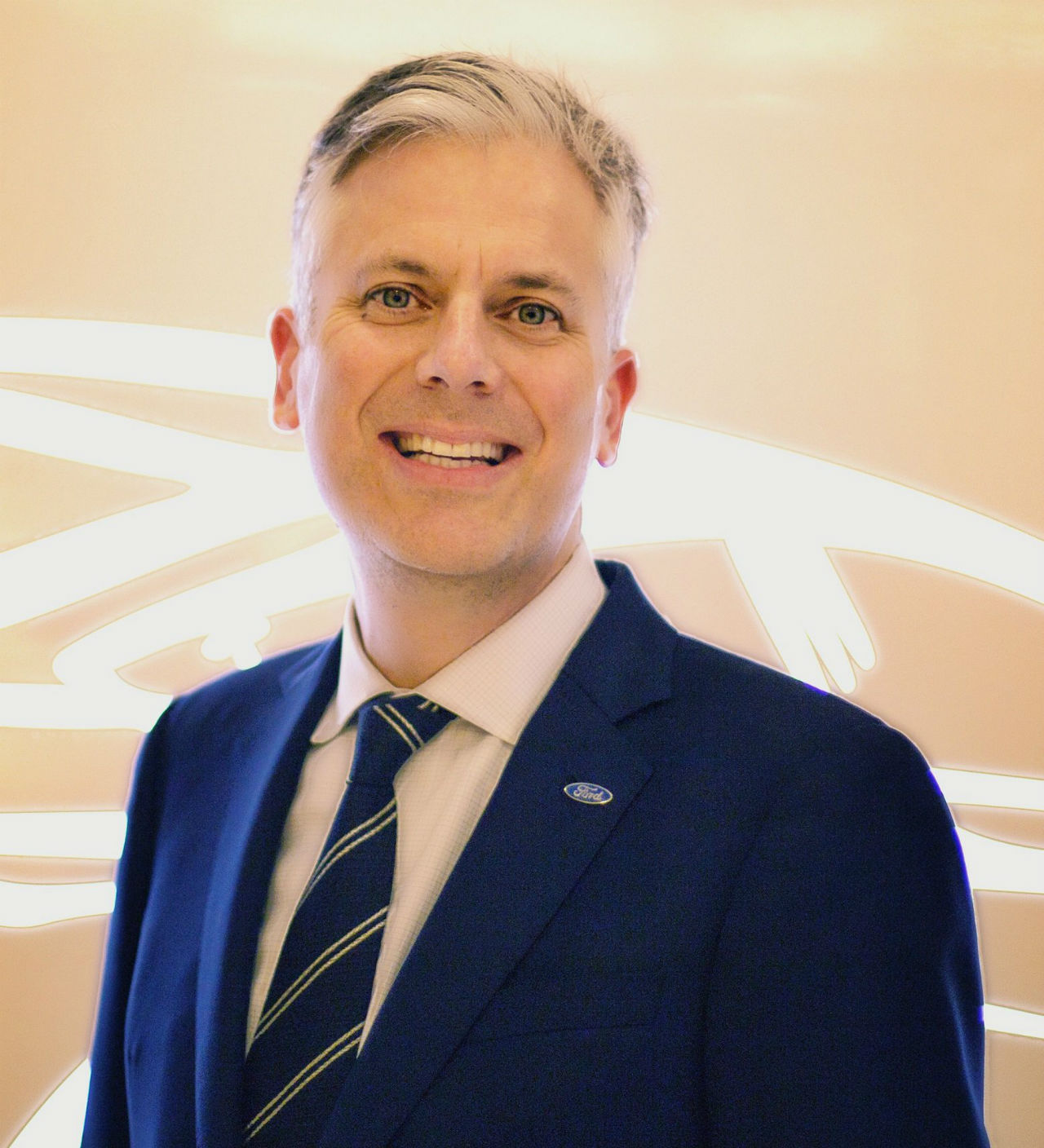 The young president – he began his career with Ford in 1992 and served in sales and marketing in Canada, the United States, South Africa, South Korea, Japan and China before taking over the top job in Canada two years ago come February – said that Ford Motor donated hundreds of thousands of the masks to their dealers around the province and had a contract with Ottawa, but it was just ending.

“We’re not doing that any more,” he said, adding that, “we still have the capability, though, if called upon again.”

One thing they are not ending, however, is the transition to electric car and battery production at Oakville that, if everything goes as planned, will see the first BEVs rolling off the line in 2024, or thereabouts.

“The whole team here is really energized with the plan for Oakville,” he said. “There’s no question, for us, that electricity is the future for all the right reasons, in terms of the environment and the planet. We’re really energized and Oakville is part of that really exciting automotive future with Ford being 100 per cent dedicated to Battery Electric Vehicles.”

I asked him if Ontario could become a centre for BEV production in North America – the go-to place for manufacturing and raw materials for battery production. He said he thought so and that Prime Minister Justin Trudeau, Ford, Bains and Fedeli share his company’s vision.

“The support they gave us is crucial to making all this happen,” he said. “And yes, I think there is a larger ambition there. We would want to continue to work with all levels of government on what that larger ambition could be. I think Oakville is Step One in that journey, which is anchoring an assembly plant here in Ontario where we’ll be assembling battery packs, a first for Canada.”

Stoneley said there have been very preliminary discussions held with government concerning what could be called the next step. But it would be a huge project, in any event.

“(From) the minerals in the ground to full batteries – there’s a really big undertaking there, he said. “I’m not an expert when it comes to mining but what I would focus on is scale. I would be very excited if other companies decide to electrify their vehicles in the province, which would provide more scale and that would benefit everybody.

“We’re always on the lookout for innovative and cost-effective supplies and while I think it might be premature to draw any conclusions around that, we would clearly like to be part of that discussion.” 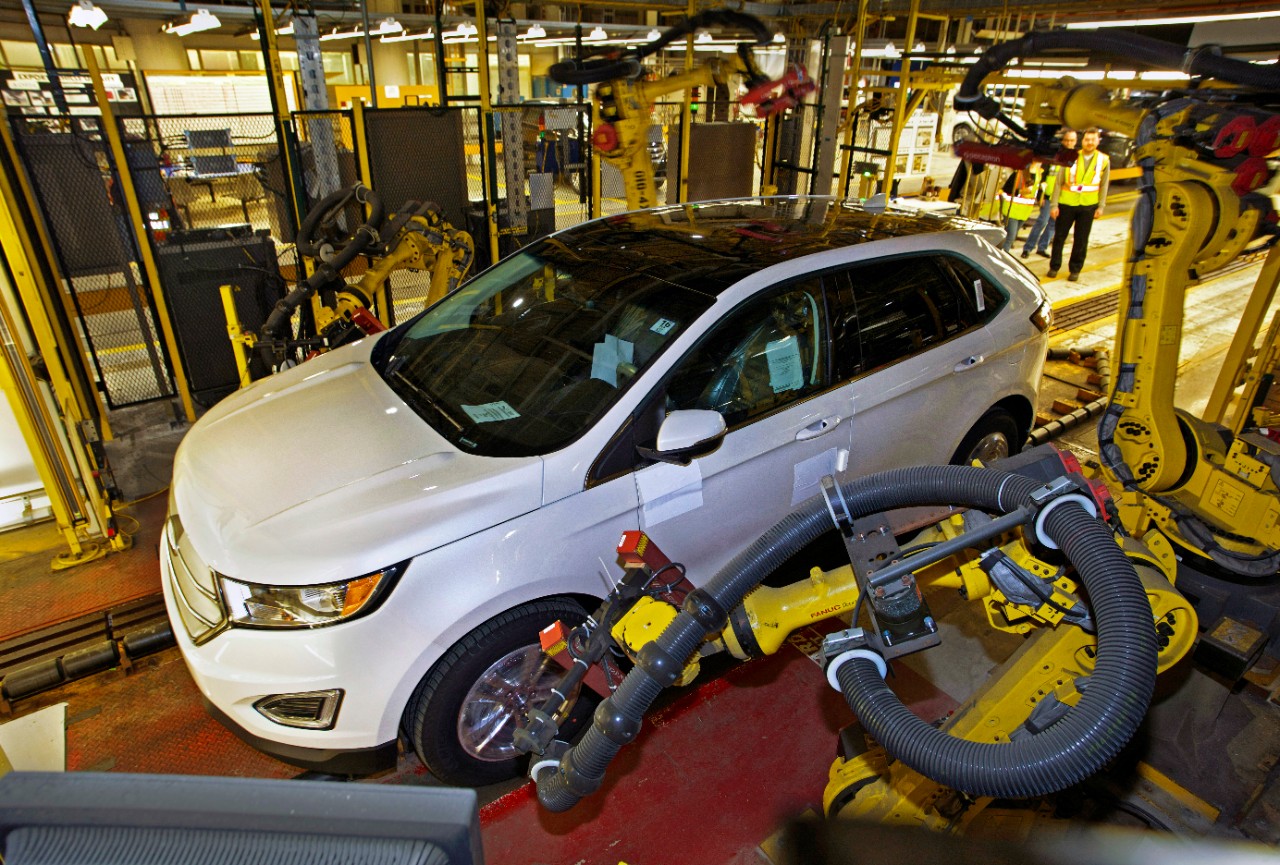 Stoneley said Canada has all the right ingredients. “We’ve got an incredible work force here but also in terms of academia and R&D and access to just amazing talent,” he said. “We’d love to be a part of that journey in terms of how big this could get.”

The president said he’s not too concerned – yet – about the lack of infrastructure across the country when it comes to powering electric vehicles. “We’re working at creating that charging network,” he said, adding that Ford has an app that gives its customers access to charging locations – 13,000 of them across North ‘America including 4,000 in Canada.

“I don’t think infrastructure is the primary constraint (to commercial success) at this point,” he said. “The value equation is there and as people start buying Battery Electric Vehicles, I believe the infrastructure will come along as a partnership between industry and government.”

Stoneley said that while the Edge will continue to be built at Oakville in the short term, “our plan is to phase out internal combustion engine-powered cars entirely and just go with the BEVs. It will be a dedicated BEV plant. There will be several products coming out of it, not just one. There will be a range of products but all will be dedicated BEVs.”

The president said he, personally, was enthusiastic about what was happening within Ford.

“We’re excited about electrifying our commercial fleet, for instance. It’s exciting to see that take shape. It’s going to transform the whole industry in terms of commercial worksites and just the capabilities that those vehicles are going to bring. It’s really an exciting time to be in this industry, to be right here during this transformation to electrification.”

If this transformation is as successful as he thinks it will be, and he keeps talking the way he has to this point, Toronto Life is going to have to include Stoneley on their list again next year.

They might even put him ahead of Dan Levy.