The 2017 Ford Super Duty pickups have moved towing into the 21st Century with technology such as a blind spot warning system that can “see” another vehicle moving up on either side of the trailer.

DENVER, CO: Ford is bringing heavy towing into the 21th century with its 2017 Super Duty pickups.

During the recent launch of the new lineup of F-250, F-350 and F-450, Ford unveiled a barrage of leading-edge technology that starts with up to seven cameras.

A camera in grille gives a forward 180-degree view that helps when coming out of a blind driveway or garage.

The tailgate camera has a moving grid to assist in connecting to trailers with a zoom-in feature and, with the front and side cameras, provides a 360-degree view.

Its primary function, however, is reverse guidance using a target sticker on the trailer ball to compute the angle and then integrate the side cameras that split the MyFord screen in half and gives a view down each side of the trailer.

As the driver backs up, there is a centre black line that shows the angle of the trailer and a white line that gives the projected angle.

As the angle increases, a yellow line with red bars indicates how close the driver is to a jackknife.

There is a camera mounted above the rear window, giving a view of the bed. This can come in handy where you’re trying to hook up a gooseneck trailer.

But the one that got me was a mount-anywhere camera that can be placed on the back of a trailer. It is wired with 38-, 48- and 58-inch cables that are waterproof and submersible and hook into the 12-pin electrical connector on the hitch. 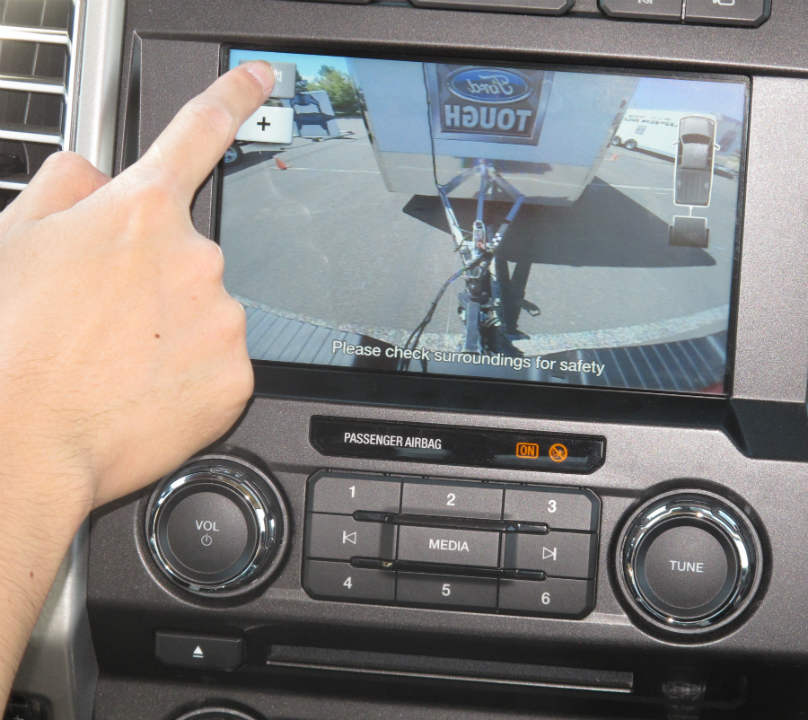 Available is a tire pressure warning system for the tires of the trailer with sensors on each tire stem that lets the driver know if one of them is deflating.

Ford is also pioneering blind spot monitoring of the trailer as well as the truck. The system “sees” down each side of the trailer and alerts the driver when another vehicle is coming up the side and it’s also great when changing lanes.

Lane departure warning is also available, which is a major help when driving a big truck with an even bigger load.

Now being offered on the Super Duty is Adaptive Cruise Control, which works with the truck’s brakes, engine as well as an integrated trailer brake controller that can hold at any set speed.

But perhaps the biggest boon to the driver is the first in class adaptive steering that uses an electric motor in the steering wheel to change the ratio by reducing the amounts of input at low speeds while lessening the amount of input at higher speeds to reduce sensitivity.

At the press introduction of the 2017 Super Duty, my co-driver and I compared the steering of an F-250 against competitive Chev Silverado and Ram around a very tight slalom course.

It was no contest as the F-250 cornered like a sports sedan with the others feeling much heavier.

Ford is also expanding the use of available LED technology starting with quad beam headlights and LED taillights. The quads are large and distinctive.

Also available are security approach lamps that shine down on the ground at each front door.

There is an available tailgate mounted LED lamp that helps when you are trying to hook up to a trailer at night.

In the bed there are LEDs in the box which allows the operator to see what is there even when a tonneau cover is fitted.

Lastly there are LED side mirror spotlights that illuminate anything that has to be done from almost any angle after the sun goes down. 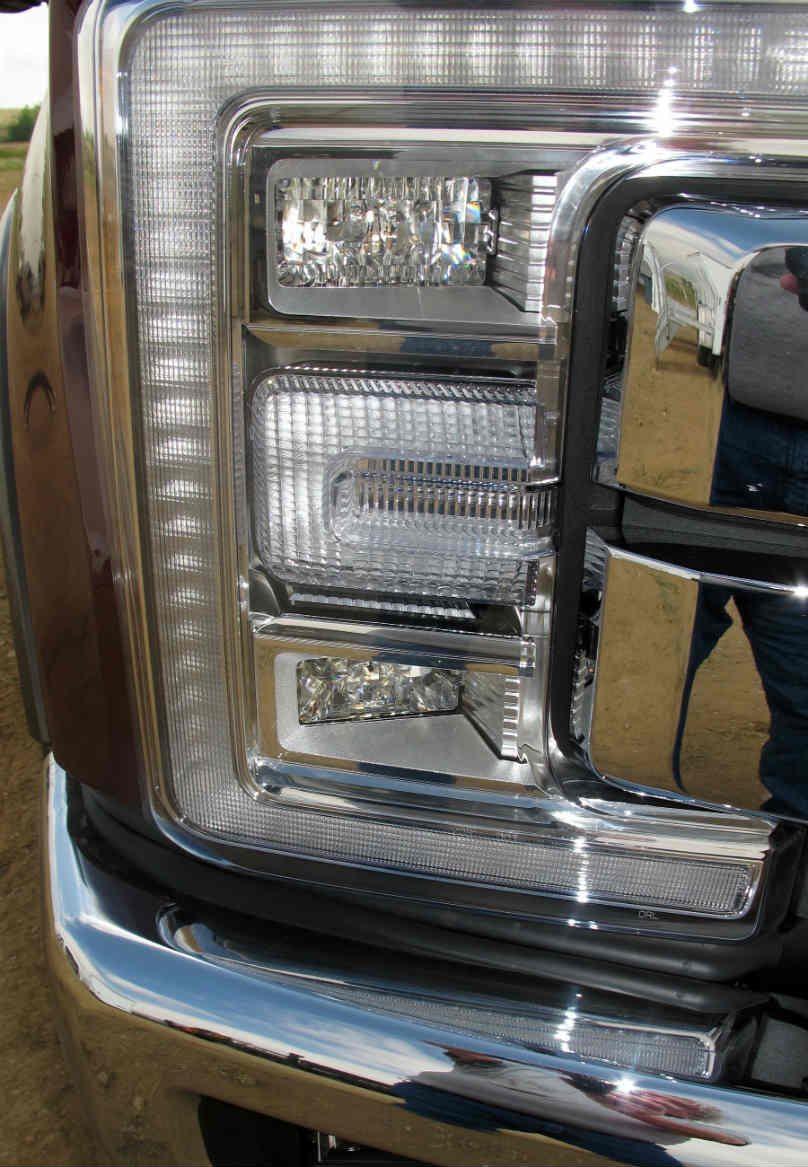