Ford puts the metal to the pedal

DEARBORN, MICH.—You don’t mess with success. That’s important when you’re redesigning a car, but it’s essential in a pickup truck, a segment that commands more customer loyalty and passion than possibly any other.

Ford knows that when it comes to its all-new 2015 F-150, which launches later this year. It’s been the best-selling truck in Canada for 48 years, but this next-generation model has some pretty significant changes, including one that might be a hard sell to many: an all-aluminum body that’s the first-ever on a production pickup.

The company invited journalists to its research facility in Dearborn to learn about the testing the truck is going through.

All new models undergo millions of kilometres of simulated and actual drive testing, but Ford seems especially intent on this one. The engineers know they have only one kick at it to win over skeptical drivers.

Aluminum in automobiles isn’t new. The F-150 has had an aluminum hood for years. And back when Ford owned Jaguar, the Dearborn engineers did much of the work developing the aluminum-bodied 2004 Jaguar XJ.

The body construction isn’t just for the sake of being different. Automakers are facing stringent fuel-efficiency and emissions standards — so tight, in fact, that some conventional cars will have to hit fuel numbers currently met only by hybrids.

The more something weighs, the more fuel it takes to move it, so carmakers are doing whatever they can to shed at the scale.

But the vehicles still have to meet crash-test standards and companies have to cope with the weight of mandated safety features and the options consumers want, as well as North Americans’ preference for larger vehicles, especially with trucks.

Although several lightweight materials are available, some are too expensive for anything other than high-end performance cars.

Between the aluminum body and more high-strength steel in the frame, Ford has taken about 317 kilograms off the F-150, a massive amount in an industry that shaves grams off components for weight savings. Since aluminum weighs about a third less than steel, the panels can still be made thick enough to handle everyday use.

And with less truck to move around, the company can use its all-new 2.7-L V6 engine with EcoBoost, a turbocharging system that provides full-load power only when needed, and returns smaller-displacement fuel savings the rest of the time.

The truck’s lighter weight should also increase towing and payload capacities, which depend on what the combined truck and load can safely weigh. Reduce the truck’s weight, and you can increase the load capacity while staying within the limits.

In a first for Ford, the 2015 F-150 will use standardized SAE towing capacity numbers when it’s launched. Currently, almost all automakers use their own test numbers.

Although the manufacturers were involved in the development of the new SAE standardized test methods, only Toyota currently uses them. The Detroit Three have resisted, since the SAE numbers are lower than the high-capacity weights they’re currently trumpeting, and each has been waiting for someone else to blink first.

Back in the lab, engineers display the special coatings, proprietary insulation, and fasteners that will bind the F-150’s body to its frame. These barriers are essential, since steel and aluminum corrode if they touch.

To test the body strength, Ford built several of its current-generation trucks in aluminum and racked up about 362,000 test kilometres on them.

Two mining companies got conventional trucks with aluminum boxes to work in real-world conditions, and their input resulted in some design changes to strengthen the bed.

Finally, an all-aluminum truck, modelled after the current pickup and using the 2.7-L V6, ran and finished the 2013 Baja 1000 endurance race.

Still, Ford’s preparing for battle. A recent General Motors ad showed a submarine breaking through Arctic ice and compared its strong steel to that used in the GMC Sierra’s bed, which many assumed was a swipe at the F-150’s aluminum. Even so, the Wall Street Journal reports that GM may put aluminum bodies on its next-generation trucks for 2018.

The collision industry also has to get ready, and Ford has pledged training and tool rebates for dealers and body shops to handle aluminum’s specific needs.

Meanwhile, the testing continues here in Dearborn: the new acrylic grille badges get showered with stones, a robotic finger swipes the dash buttons over and over, and a robot gets in and out of the seat thousands of times.

With Ford aiming for 49 years of success, it’s all stuff that simply has to be done.

The 2015 F-150 will be the first pickup truck to use LED headlights, which have a longer lifespan and use less electricity.

The new F-150 will be the first production pickup with LED headlights, which run cooler and use less electricity than conventional bulbs.

“The capsule in a halogen light is about 600 Celsius,” says Mahendra Dassanayake, senior technical leader for Ford’s opto-electronics. “The (LED lights) get about 50 Celsius. They’re over 65-per-cent more efficient than a halogen lamp.”

LED lamps cost more, but they last longer than other bulbs. Instead of a filament, they use semiconductor chips to produce light.

Dassanayake says that while vibrations from rough roads can be hard on filament bulbs, they don’t affect LEDs. “So you have less heat, plus this rugged construction,” he says.

Since they don’t heat up, LED lights also don’t melt snow, and Ford is working on special coatings to reduce slush buildup on the lamps in winter driving. 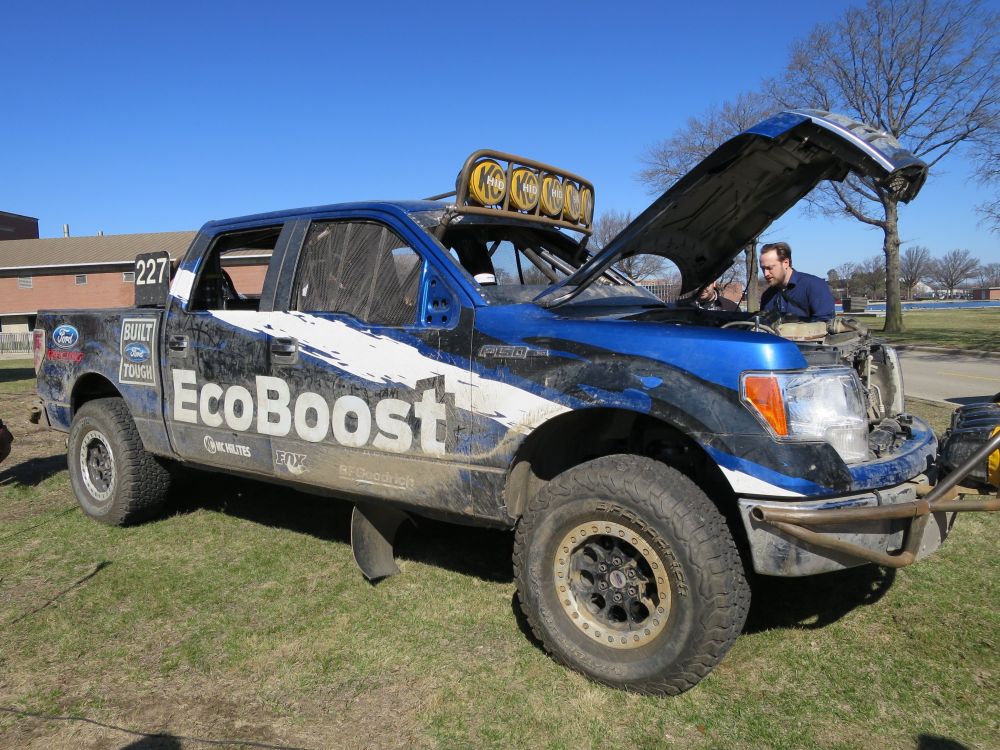