The AMG EQE SUV will make over 700 lb-ft of torque, AMG Sounds.

Join the Conversation (0)
It appears fans of the fabled three-pointed star brand will need to get used to ‘EQ’ designations spreading across the entire lineup, where it’ll denote a range of all-electric cars and crossovers from the folks in Stuttgart. The latest is this EQE SUV, set to dive head-first into the murderously competitive mid-size luxury EV crossover segment and do battle against machines like the BMW iX and forthcoming Audi Q6 e-tron, not to mention the anticipated Polestar 3. Tough crowd.

We got a first look at the new EQE SUV (and its hot AMG variant) in Colorado last month, where suits from Merc confiscated our smartphones before permitting us to crawl in and around a pair of static display models. Given its just-right sizing and immediately recognizable looks, not to mention a very aspirational badge, the EQE SUV is likely to become one of the highest volume models at Mercedes once its corporate storybook flips to an all-electric chapter just a few short years from now. 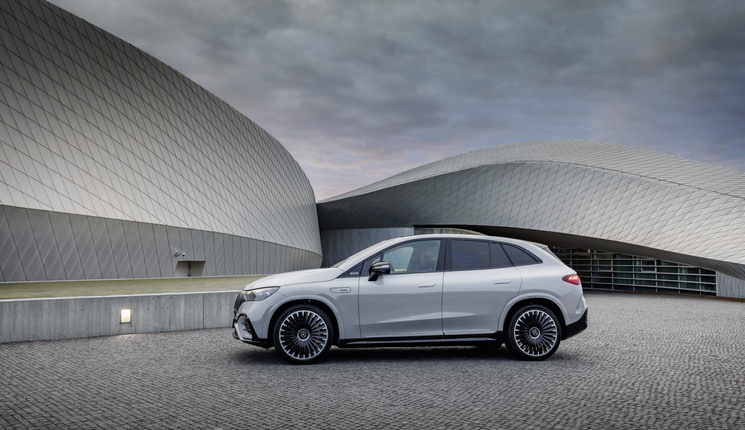 Let’s start with its appearance, where one will find what Merc describes as a “compact and crisp” take on the gigantic three-row EQS SUV. Overhangs are short on this two-row model and there are a series of design choices – such as the bulging flares on its bonnet and a sharp shoulder line – which provide the EQE SUV a more muscular look than its bigger brother. If you’re looking for a quick way to tell the difference on the road, spot the number of illuminated “pips” in the headlamps: the EQE has two while the EQS has three. For perspective, this rig’s wheelbase falls between the existing GLC and GLE gassers, with an overall footprint closer to the latter. Compared to today’s GLE, it is slightly wider and a bit shorter.

And, no, this is not a so-called “coupe” SUV. The rear styling of this vehicle is a slight trick of the eye, with a series of black trim on its roof permitting the colour-keyed portions of the greenhouse to plunge toward the pavement rather aggressively. However, its profile is much squarer than it seems at first glance, which is good news for rear headroom and cargo space. As a yardstick, the EQE SUV can offer up to 580 litres of cargo space behind the second row compared to the GLE gasser which checks in at a shade over 630 litres. Certainly, this 6’6” author had no issues getting comfortable in the backseat area. 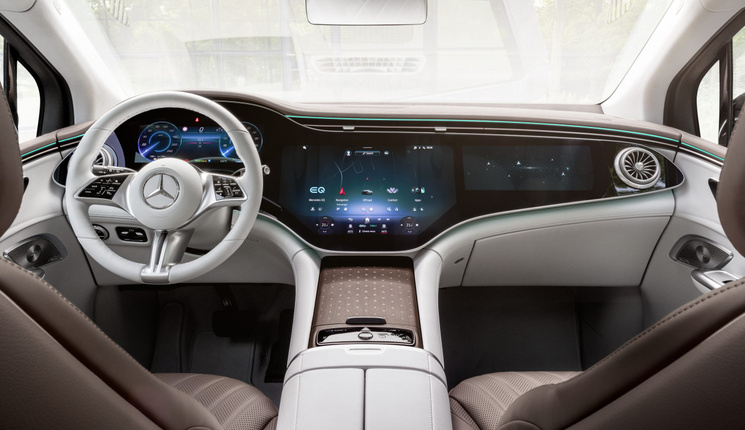 Speaking of that space, the interiors of its EQ line is where Mercedes has been plowing an untold amount of R&D – and this EQE SUV is no different. The amount of available luxury is frankly gobsmacking. From the available Hyperscreen which places a trio of enormous displays under a single curved pane of glass spanning the width of the car to sumptuous upholstery materials to a 3D sound system rivaling anything in a home theatre – this EQE SUV is every inch a Merc. In fact, the latter is not even yet available in the bigger EQS SUV.

The typical lightshow which has become something of an EQ trademark is on full display here, dancing around the cabin as occupants call for a temperature change or alter the stereo settings. Rose gold trim is available, capitalizing on a current trend, and contrasting colour schemes follow the exterior design in making the EQE feel sportier than the EQS. There will be a ‘leather-free’ interior option but, interestingly, Mercedes say it cannot technically call it a vegan interior since the upholstery may pick up traces of honey during its manufacturing process. 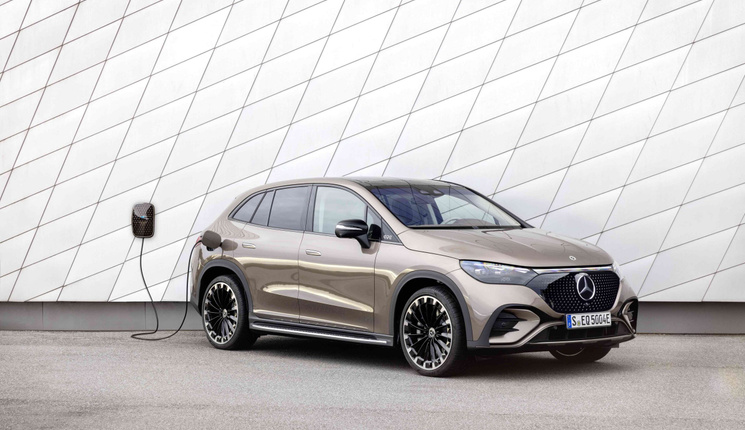 Powering the EQE SUV are what Mercedes is calling “permanently excited” electric motors (we wish all our electric motors were permanently excited) of similar output to that found in an EQE sedan. This manifests as 288 horsepower and an impressive 565 lb.-ft of torque in the 350 4Matic trim or 402 horses and 633 lb.-ft of twist in the 500 4Matic model. Alert readers will have noted that 4Matic means all-wheel drive is standard across the board in Canada. Range is said to be roughly 550 kilometres but it is worth saying that statistic is based on wildly optimistic European testing procedures. For what it’s worth, dashboards of recently tested EQE sedans equipped with a 90-kWh battery (equivalent to what’s found in the SUV) displayed roughly 440km on a full charge. A standard heat pump assists the thermal architecture to help with range, if you’re wondering.

As with most Mercedes offerings, there will be an AMG variant – despite many traditional gearheads steadfastly refusing to believe any “true” AMG must be powered by internal combustion. In this, Mercedes has rather backed itself into a corner over the years, after imbuing its AMG lineup with snarling V8 engines and twin-turbo mills which pop and crackle. Engineers promise this all-electric AMG EQS SUV will be able to produce a similar (and simulated) racket, one which might not specifically replicate the past but nevertheless excite the Cro-Magnon parts of a gearhead’s brain. 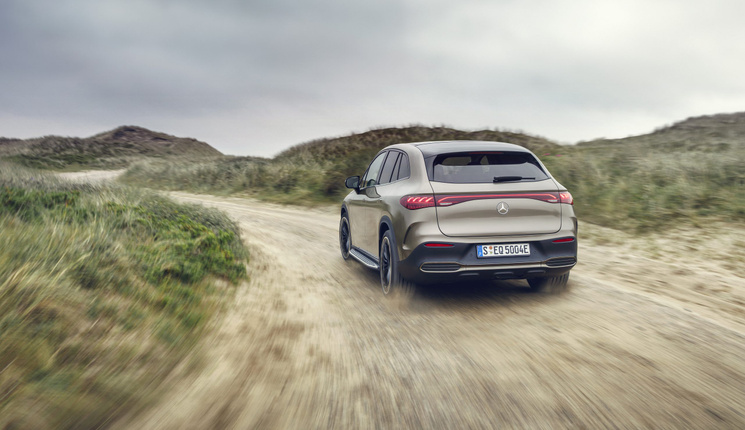 But here’s the thing. If our previous experience with AMG-tuned EVs is any indication, none of that will matter. While the fact that this AMG will not – despite what it says on the badge – be built in Affalterbach, the gearheads from that speed-frenzied arm of Mercedes-Benz have been permitted to have their way with certain aspects of the EQE’s architecture, such as the electric motors and their windings plus the suspension and its driving modes.

How much fettling? Try a maximum of 626 horsepower and 700 lb.-ft of torque from its two electric motors, one front and one aft, sums which are bumped to 687 and 737 respectively when customers spec the optional Dynamic Plus package. The latter is good for a run to highway speeds in just 3.5 seconds, putting it in good company with other hi-po vehicles in the AMG lineup. 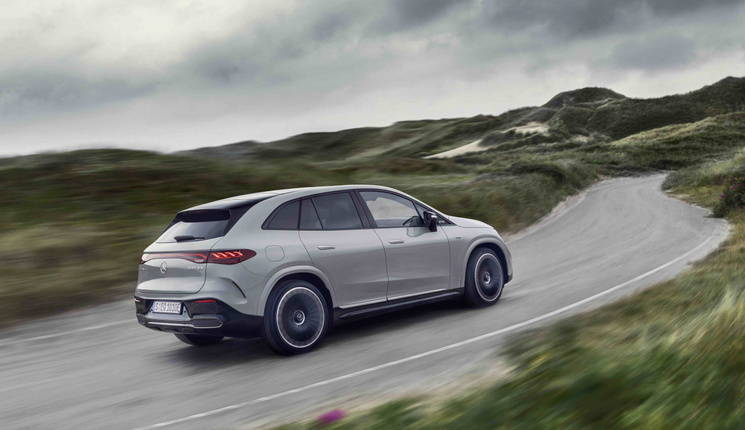 Standard-fit air suspension with 9 degrees of rear-axle steering bring the goods in terms of handling, aided by a motor which is “particularly powerful” on the rear axle. While the Merc crew wouldn’t divulge the power split, it sounds like the AMG EQE SUV can be coaxed into tail-out shenanigans, particularly when plunked into one of its lairier drive modes.

Tellingly, but unsurprisingly, the AMG EQE SUV on display wore a set of Michelin Pilot Sport EV tires compared to a comfortable but more pedestrian set on the workaday trim. These hoops are the brand’s maximum performance summer tire, developed to deliver gummy handling and literally not intended to be used when temperatures are anywhere close to the freezing mark. The presence of their asymmetric tread and extreme tractive compound put an exclamation point on the fact that engineers are going through great lengths to imbue this rig with the right AMG handling characteristics. Sounds promising. As for if it makes the right AMG noise – simulated or otherwise – we shall have to wait until next year’s testing. For those who just want a taste of this go-fast lifestyle, a so-called “AMG-Line” package will be available on the standard car.

The new EQE SUV will be on sale in Canada this coming March, with the hot AMG variant following a short while later.