The Cadillac CT5 is the second model with the company's new design language.

Join the Conversation (0)
You might be surprised to see that the latest in Cadillac's new model onslaught is a sedan. After all, aren't sedans dead? Not the good ones, says Cadillac. Which is a bold statement for a brand that's been spending many years trying to earn back its lustre. But Cadillac is on a hot streak. They've moved back from New York to Detroit, they had a best-ever sales year last year, and saw a nearly 20 percent climb in China.

Still, why a sedan now? Well, Cadillac has a full-line of SUVs right now, for the first time. At least if you don't include as a qualification for a full line the myriad of SUV coupes that some of its competitors are delving into. But some of their sedans were due for replacement. And, as Cadillac marketing head Jason Sledziewski said, sedans are still a big deal in China, in addition to being a big part of the brand's history. Most importantly, they allow for performance variants. Which we're hoping means that there are V and V-Sport variants of this all-new CT5 on the way.

The Cadillac CT5 is the second model with the company's new design language. The first being the XT6 crossover that debuted earlier this year. Like the XT6, this one doesn't work as well on screen as it does in the metal. The CTS that this car is replacing has some serious presence on the road, looking much bigger than it is. The CT5 doesn't quite match that, but in person it looks smaller (it's not) and more lithe (we'll see). Plus unlike the XT6, this one keeps the Cadillac boomerang accent lights. The grille on the luxury trims gets a texture borrowed from the Escala concept. Sport gets mesh inspired from the V (along with lots of other black trim and carbon on the inside). Though really, it's just mesh, so calling it inspired seems like a slight stretch. Most notably at the nose, Cadillac has added a front-facing camera and radar sensors that hide in the brand's shield. The crest is a sticker over a clear panel, but you won't know that unless you touch it. Unlike many current tech-laden vehicles where the transparent sticker logo can be spotted from the next postal code. 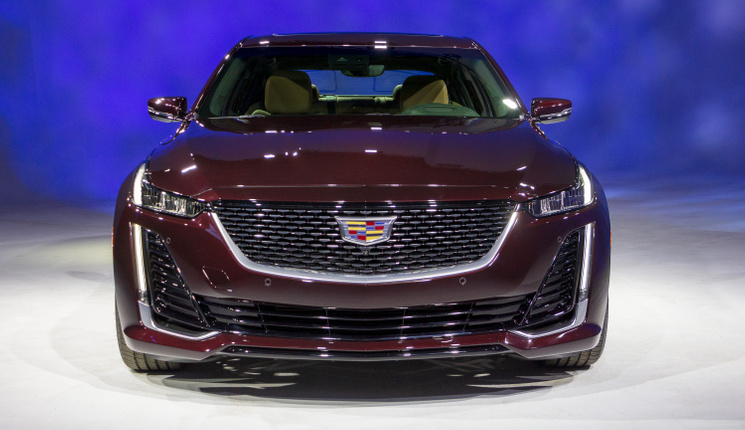 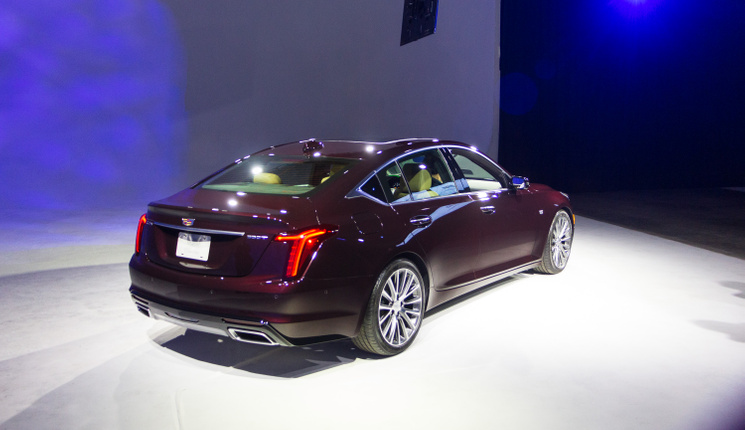 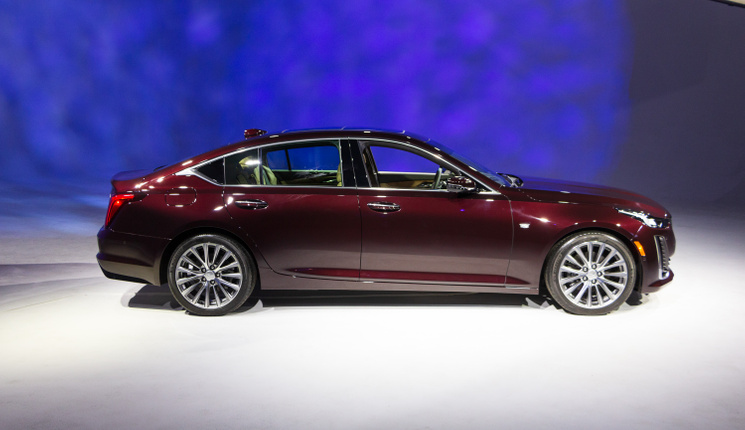 At the rear, the subtle spoilers help give the trunklid the outline of a giant version of the crest. And yes, quite a few trunks have a similar shape, but this one looks much more deliberate. Like a Jeep easter egg writ large. The only head scratcher is what we're calling the egg tooth in the C-pillar trim. At least in the gloss black trim of the sport it's slightly less visible.

Based on GM's Alpha platform, the same one that underpins the Camaro, the front-engine, rear (or all) wheel drive CT5 gets a choice of two powertrains. The first is a 2.0L four with a twin-scroll turbo and a sliding camshaft that allows for cylinder deactivation. That one makes 237 hp and 258 lb-ft of torque, with full torque from just 1,500 rpm. The 2.0 gets a 350 badge on the trunk, which is the torque figure in newton-metres. Which sounds as strange to us as the first time litres displaced cubic inches on a displacement badge.

Cadillac has added Tour, Sport, and Snow/Ice drive modes that adjust the steering, brake feel, and even the sound of the cars. That's right. Active noise control and laminated glass make the car so quiet that the automaker is adding noise back in through the sound system. Just about everyone is doing it these days, so we won't judge. Until we hear it.

At 1,660 kg, curb weight of the base car is within 4 kg of the CTS. Which makes sense, because it's pretty much bang on with the exterior dimensions of that car. The doors and the hood are aluminum to help make sure this cab-rearward car still has 50/50 weight distribution. 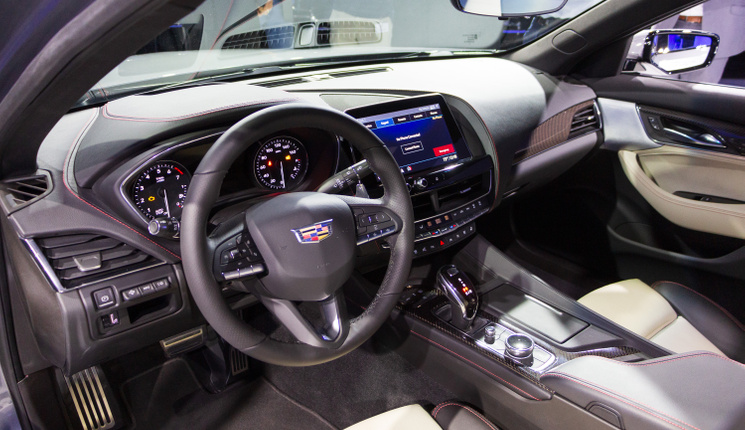 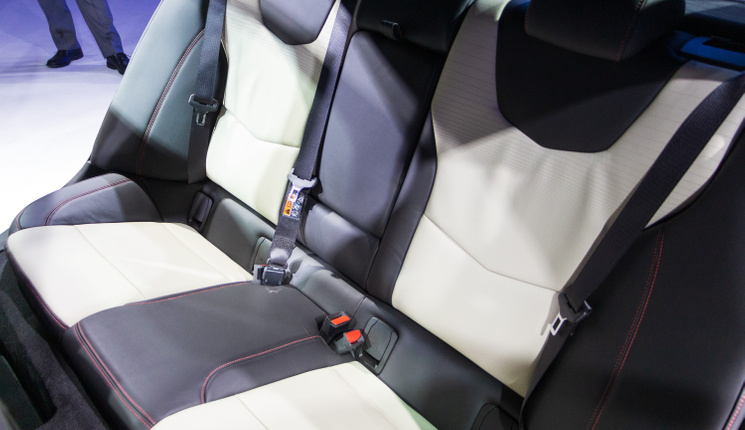 On the inside, the car's interior looks like most of the rest of the automaker's wares. Simple interfaces with redundant buttons for most controls. Elegant lines and materials like open pore woods make for a warm and inviting environment. The driver's seat has loads of head and legroom, even for this writer who complains about headroom in most vehicles. And that's with the sunroof option. Almost as important, there is enough kneeroom in the back for passengers well over six-feet to sit behind an equally tall driver. Though rear headroom is a bit more snug.

That interior is loaded with tech, too. It starts with a 10.0-inch touchscreen, even on the base model. Plus one-touch bluetooth connection, though we didn't get to try that one out. Cadillac has added what it calls a phone shrine in the center console, where if you haven't moved on to wireless charging, you'll enjoy the ability to put your phone in a pocket with the cord plugged in to the bottom and not poking awkwardly out of the top. Of course, there's wireless charging available. Cadillac's Super Cruise semi-autonomous driving tech is coming, but it won't arrive until sometime next year.

Forward collision alert, automatic braking including pedestrian detection, and an LED windshield-projection collision alert are all standard. Premium Luxury and Sport both add lane change alerts with blind spot warnings, rear cross traffic alert, rear park assist, and auto-dim mirrors. And those top trims can add auto-park assist, enhanced emergency braking, surround vision, a head-up display, and lane-keeping are on the options list along with the latest version of the brand's rear camera mirror that flips between conventional rear-view and a display from a camera mounted in the antenna.

It's not the exterior appearance that you were probably expecting, but the new CT5 is a good look for the brand. And expect it to continue when the smaller CT4 arrives sometime later this year. The CT5 is being unveiled today at the New York International Auto Show, and it's expected to arrive at dealers in the fourth quarter of this year.