If you’re in the market for a $90k luxury SUV – gas or electric – BMW has just made your decision a little more difficult. Especially if you’re looking for major power to go with new-age pampering interior technology, BMW’s upcoming iX five-seat all-wheel drive SUV will be a significant new model for the company, and will finally give it an all-electric arrow to put up against the likes of the Tesla Model Y and the Audi e-Tron.

BMW learned key lessons for the iX from its i3 hatchback, a small carbon-fibre-plastic-bodied city runabout that was clearly ahead of its time when it first went on sale in 2013, but won’t be sold in Canada after 2021 model year. In an hour-long “get to know you” sneak peek of the 2022 iX xDrive50 at BMW Canada headquarters, the company provided a detailed briefing on what makes the iX unique in the rapidly expanding market for electric luxury SUVs (or ‘SAVs’ for Sport Activity Vehicle in BMW marketing-speak), plus how and where it will sell the iX in Canada.

The first iX version that’s slated to arrive in March 2022 will be the 516 hp xDrive50, around the same time as the BMW 3-Series-sized i4 sedan BEV (battery electric vehicle, as is the iX). BMW Canada confirmed that the iX and the i4 will be available at all BMW dealers across the country, for both sales and service. 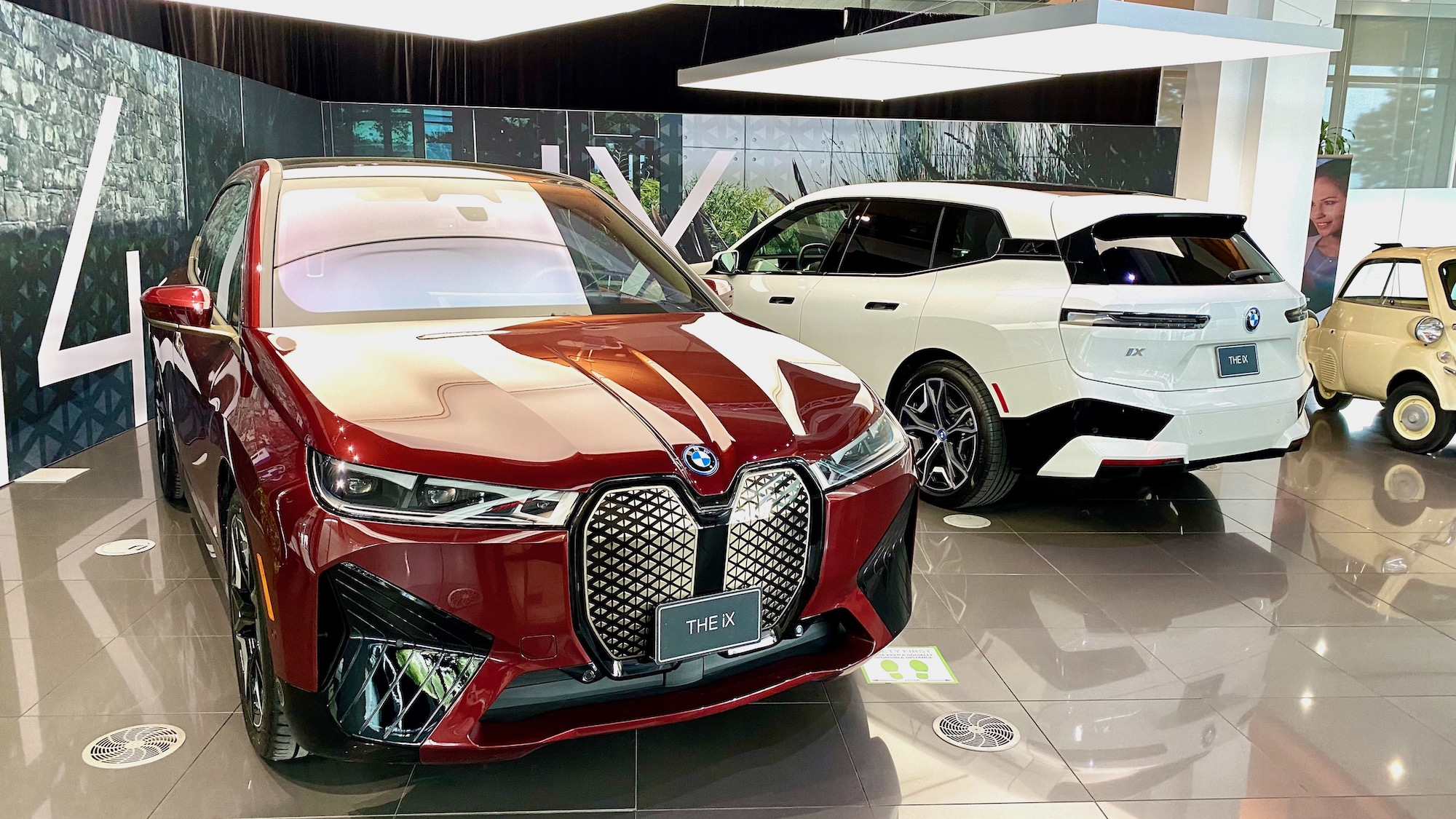 The next iX version to arrive in 2022 will be the slightly less expensive iX xdrive40, to be followed later by a 600+ hp iX M60 model, which will be the first all-electric SUV produced by the company’s famed M performance division.

Pre-orders for both the iX and the i4 started in June in Canada, and roughly half (380) of the 800 orders taken at the time of writing have been of the much pricier iX, which starts at $89,990. The i4 sedan will start at $54,990 for the 335 hp, rear-wheel drive i4 eDrive40, and offers an estimated 475 km of range – which is exactly the distance the iX xDrive50 is expected to achieve on its official EPA and Natural Resource Canada ratings, though those haven’t been published quite yet.

The iX is sized between an X5 and an X6, but rides on a totally separate all-electric architecture, says BMW. Still, there is no storage space up front under the hood, while the single charging port door is in roughly the same right rear quarter panel location as those gas SUVs, which often is the case on vehicles that use the gas vehicle as at least a rough ‘template’ structure. Owners can’t even open the hood to peer underneath or access fluids, with only the BMW badge up front popping up for drivers (or service techs) to replenish the windshield washer fluid. 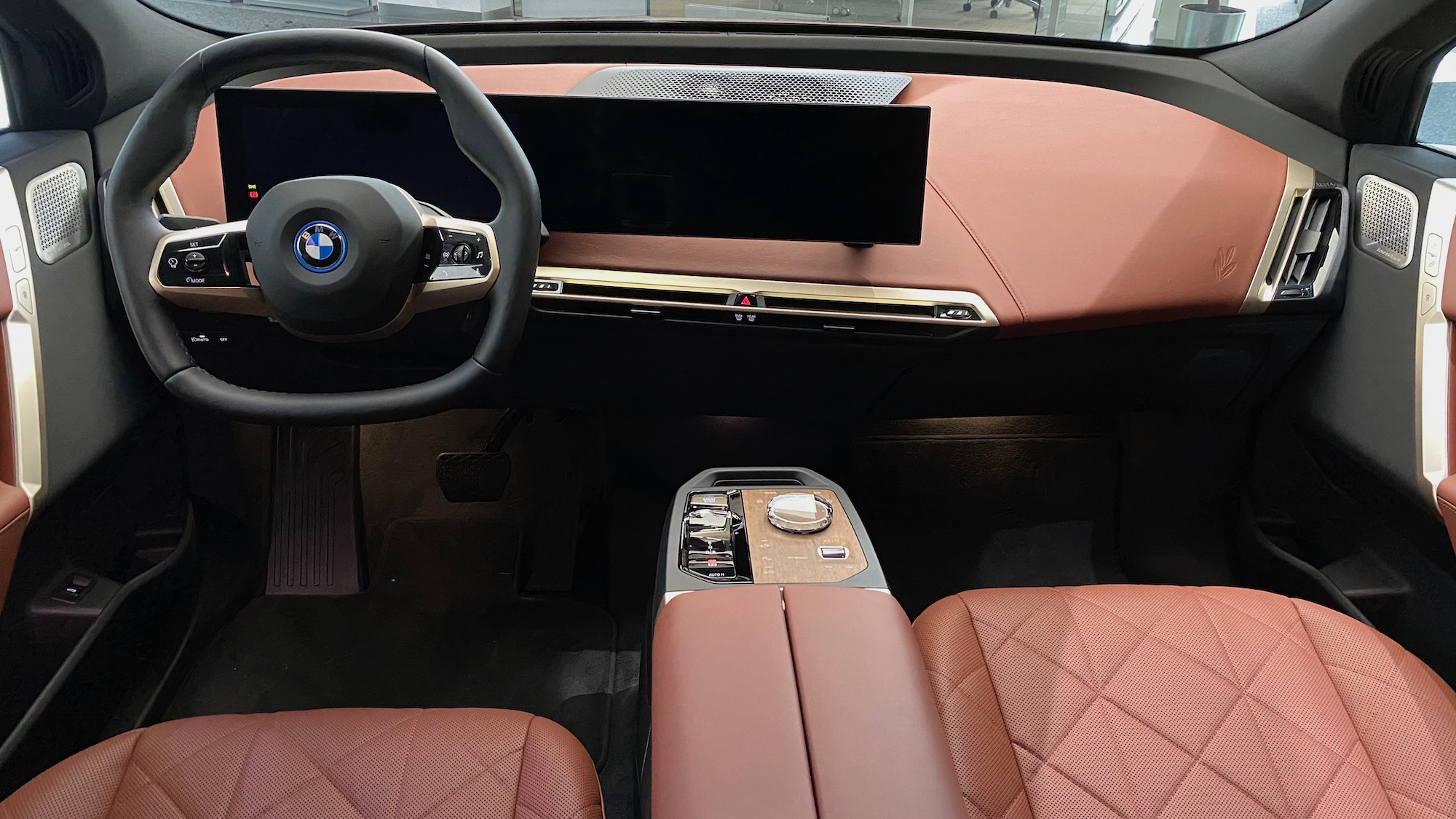 This iX is the first BMW SUV to use pillar-less doors, while lessons from the i3 hatchback and more recently adapted to the BMW 7 Series can be seen in the carbon fibre-reinforced plastic ‘Carbon Cage’ that runs from the windshield to the door structures to the rear window surround, and is visible every time a door is opened. Lightweight aluminum is used extensively throughout, in its spaceframe body, front and rear suspension, wheels and the integrated battery casing along the vehicle’s floor.

These lightweight materials work to counteract the relatively huge 111.5 kWh battery in the iX 50, of which 106.3 kWh is usable, meaning the iX will have one of the largest batteries in the personal vehicle market, at least until high range electric pickups start hitting the road. Charging up this large battery from zero to full takes roughly 11 hours, at 11 kilowatts on a Level 2 (240-watt) charger, though very rarely will owners drain the battery near pure empty.

At a public Level 3 DC quick charger, the iX 50 can be charged from a more realistic 10% to 80% in 31 minutes, says BMW, with a maximum charging rate of 200 kW – not bad, and very similar to Audi’s e-Tron electric SUV, but not Tesla quick. There is a nicely damped charge port cover too: push the top tab for the usual L2 home charging, or push the bottom tab for CCS quick charging, which retracts both covers to allow for the larger CCS combo connector. 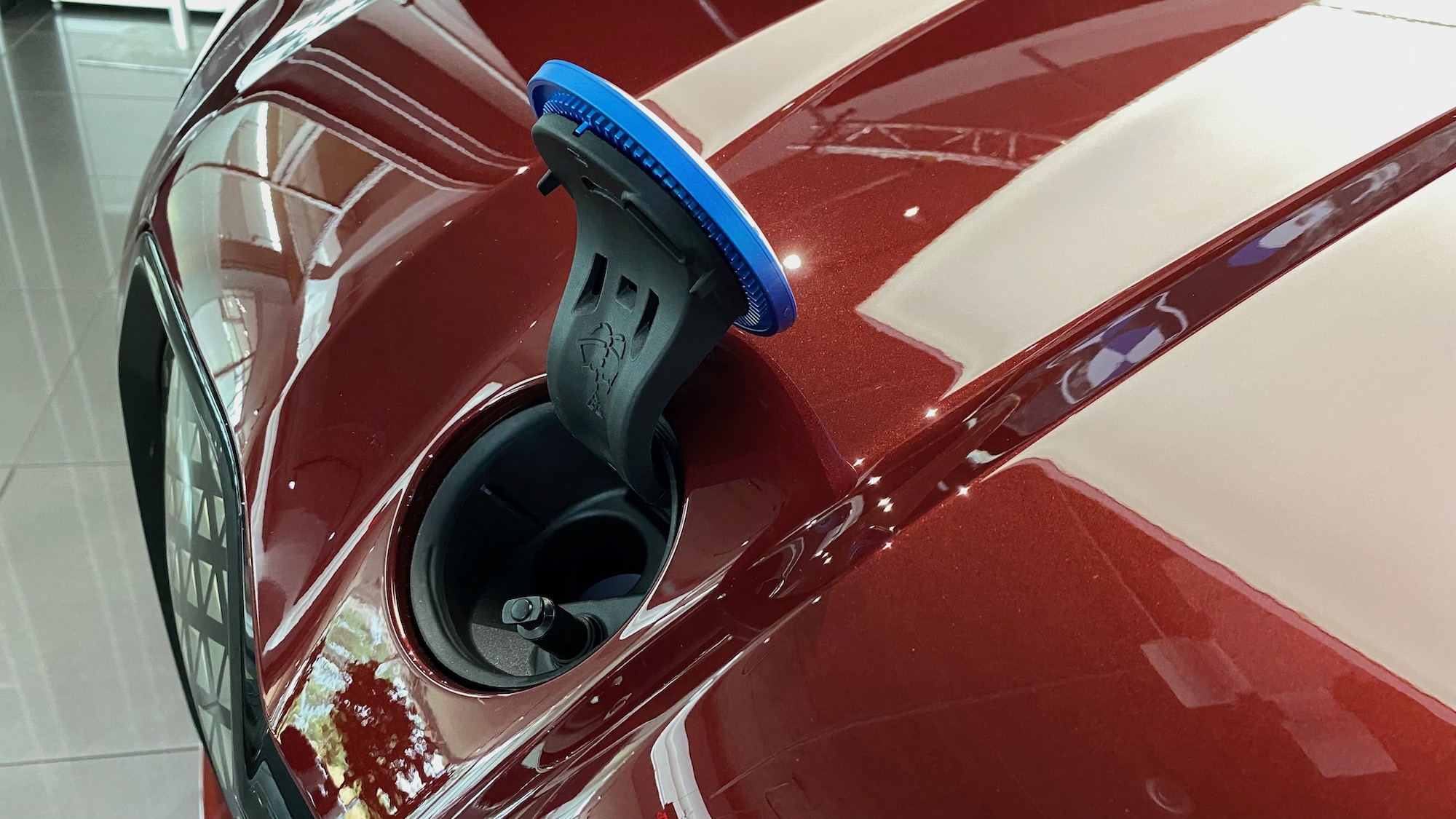 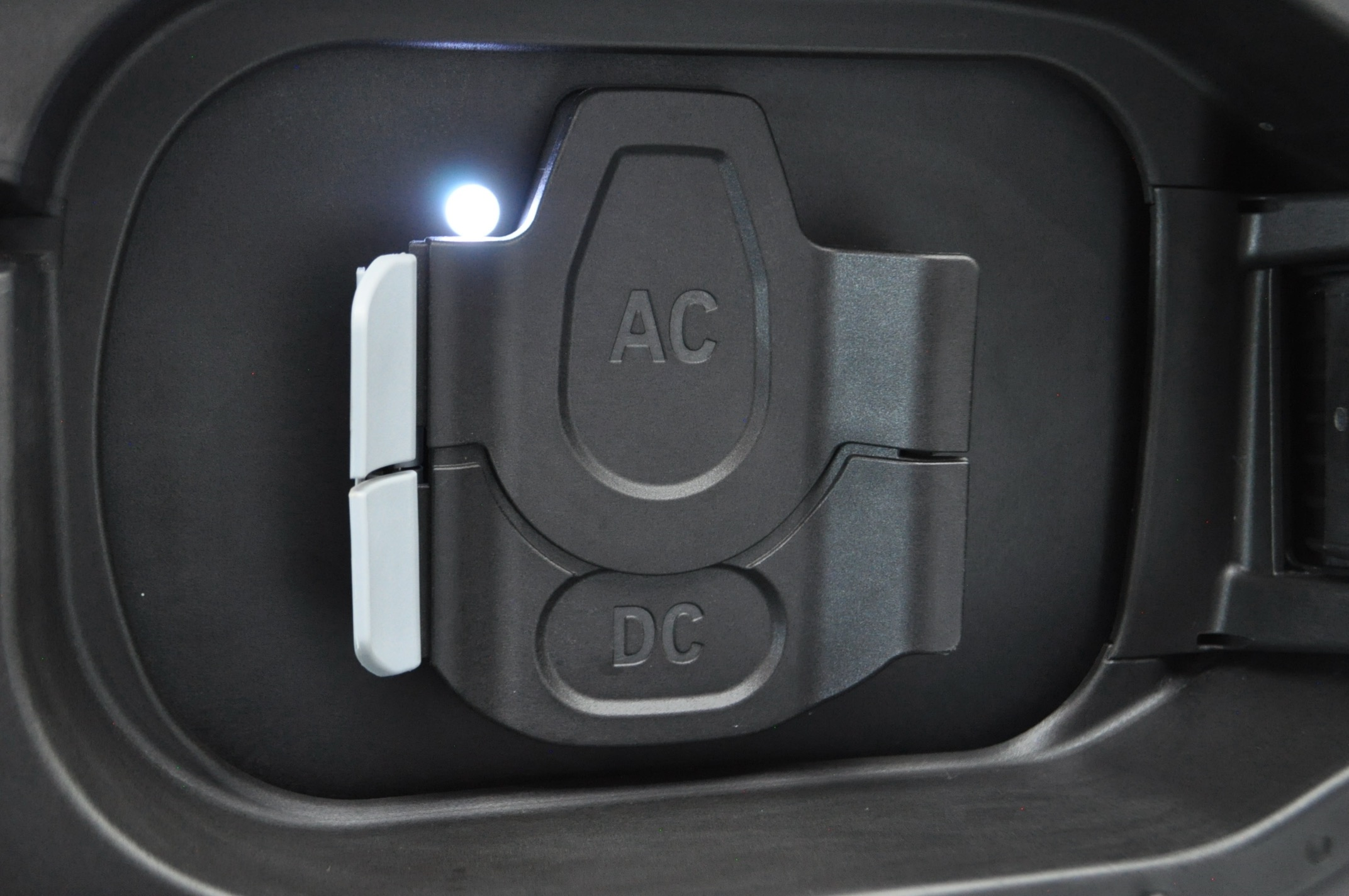 This thermally-managed lithium-ion battery will come with a heat pump to lower energy losses in colder weather, plus it will store power to send to an electric motor each axle of the iX, making a combined 516 hp and 564 lb-ft of torque. This is above the 496 hp output of its rival Audi e-Tron’s sportier S model in full boost mode, which coincidentally will start at $109,000 when it arrives by the end of 2021, but lists an official range of only 341 km, compared to the 475 km expected in this upcoming iX 50.

Even the Tesla Model Y Performance is optimistically rated at 488 km, and Tesla recommends owners charge to less than 100% if not needing that full range on a road trip. The Tesla’s 0-100 km/h time of 3.7 seconds is notably less than the iX’s 4.6 seconds, as is the Y Performance’s starting price – but in both areas, the BMW is closest to the class-leading Tesla.

It’s difficult not to comment on the huge grille of any new BMW, but it seems an even more egregious design element on a fully electric vehicle which needs no large (or small) air intakes to operate. On the iX, these matching tombstones are called a ‘sensor panel,’ which contain innovative self-healing properties, as well as warming elements to help melt off ice and snow, while the reverse camera pops out from under the rear BMW badge.

Inside, the iX offers a single curved piece of glass for a sweeping all-LED instrument and infotainment functions, with only three buttons on the centre stack, and minimized air vents. The transmission has no shifter, just a toggle switch below the Start/Stop button that resides on a floating panel between front seat occupants. An available clear rotary iDrive controller also resides here, with modes and functions not accessed by ungainly buttons, but integrated right into the available sustainably grown wood panelling. 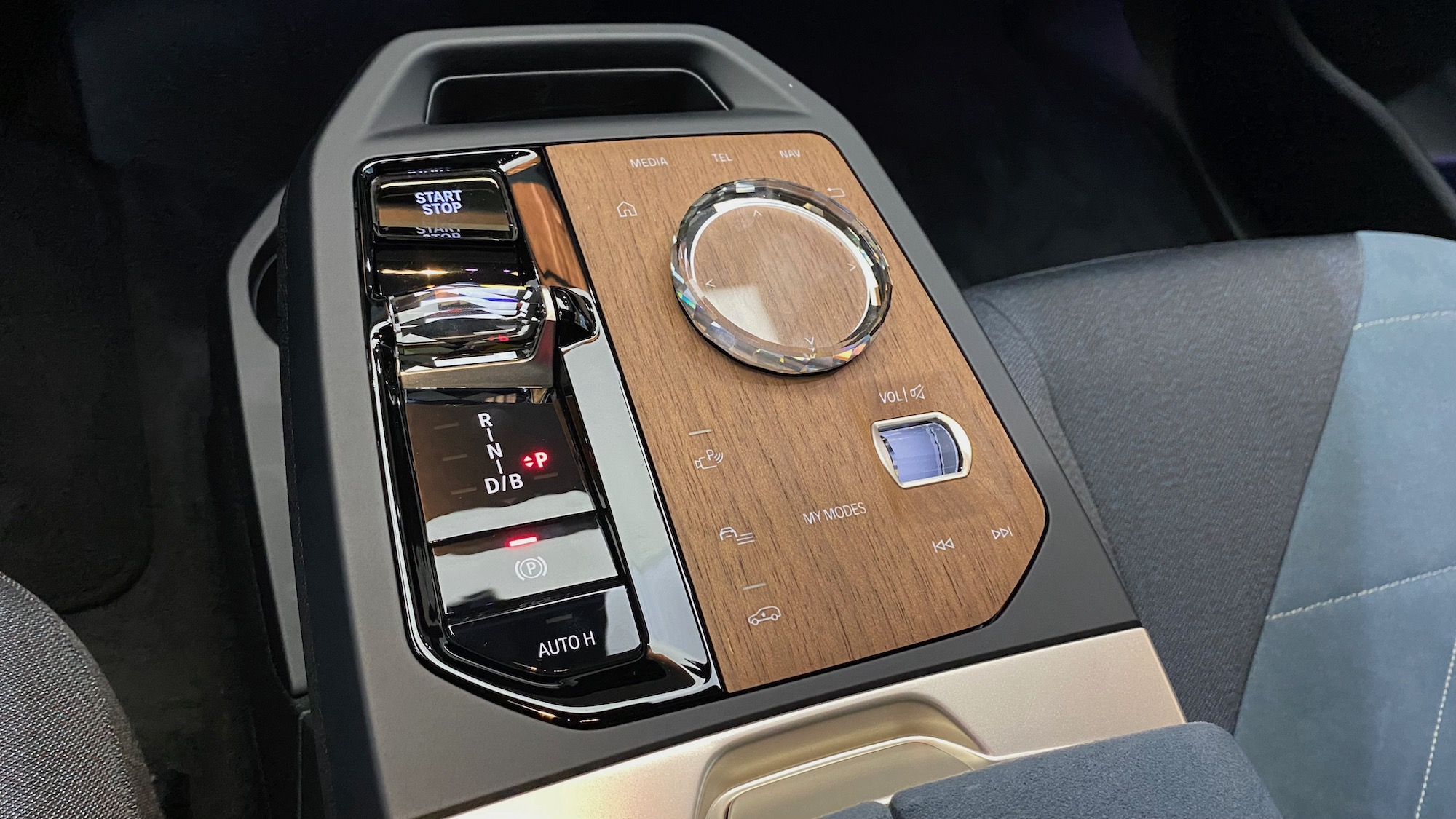 Rival Mercedes-Benz owners will be able to find the power seat controls easily, as they reside up high in the front door panels, a traditional Mercedes layout. The door opening mechanism is by a power button, with power-close function, though of course there’s a manual door latch hidden near the bottom of the door, just in case. Like other high-end BMWs, a heated centre console, glovebox and outer door panels are also available, helping to warm up the interior quickly, along with the heated steering wheel and seats, front and back of course.

Its optional panoramic roof is the largest piece of glass ever fitted on a BMW vehicle, and instead of a slow-moving cover uses electrochromic shading that can instantly block out or let in the sun’s rays.

Although this early pre-production model didn’t have its iDrive 8 software totally dialed in yet, I did notice that its audio choices didn’t include AM radio. BMW for some reason has never included AM radio in its EVs, as Tesla and some other luxury EVs don’t as well, even though pretty much every non-luxury brand EV offers AM radio. Hopefully the digital versions of these stations will be available through the FM band at least, but it’s just so much quicker and easier for sports and talk radio fans to access a different band than to go through streaming radio apps. 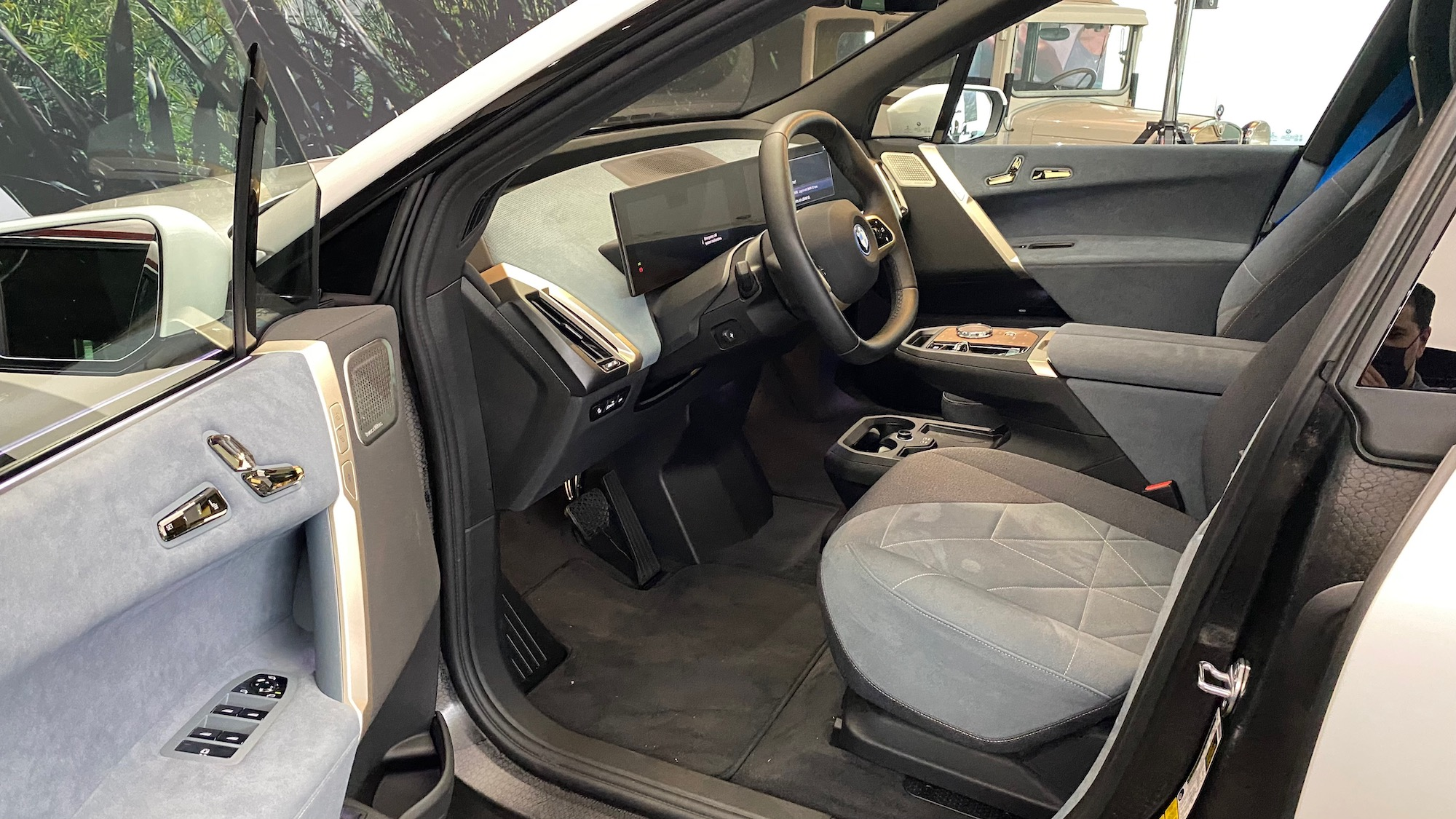 Despite this common quirk, based upon this up close look at the all-electric BMW iX xDrive50 SUV, there’s a healthy helping of value in this growing class, even at a lofty $90k base price. If it drives on the road as well as it impresses on paper, this first BMW BEV SAV may well again mark another major automotive turning point for the brand. 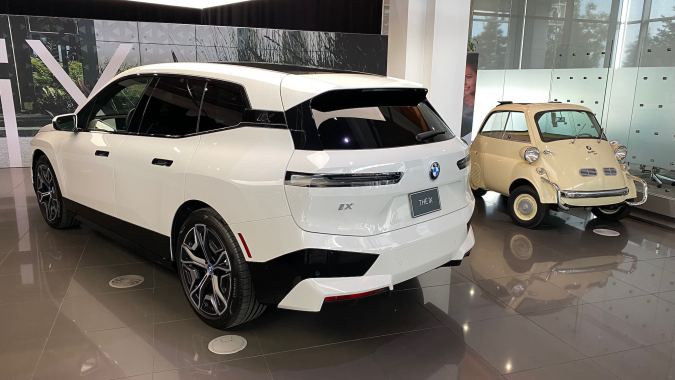 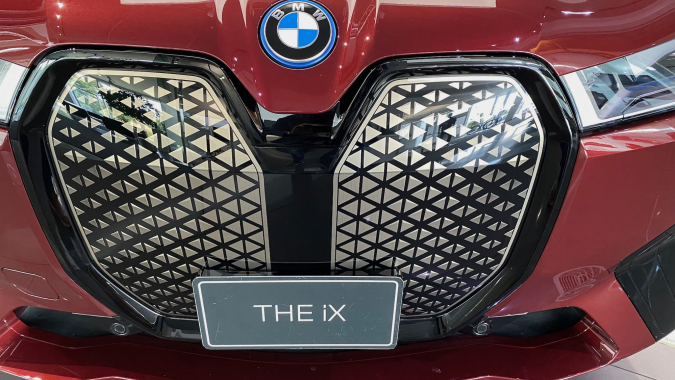 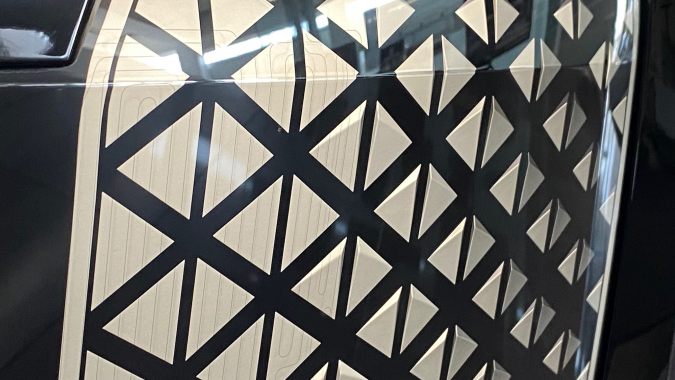 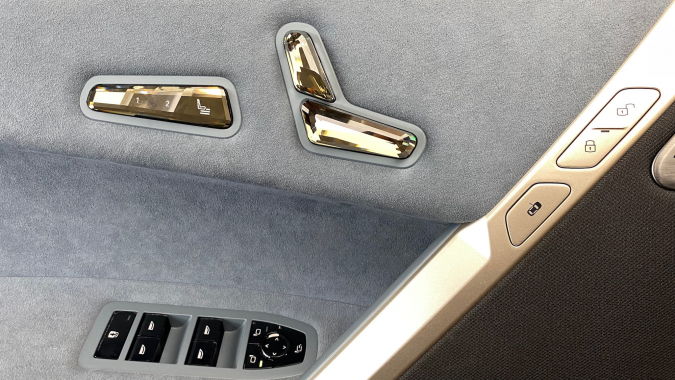 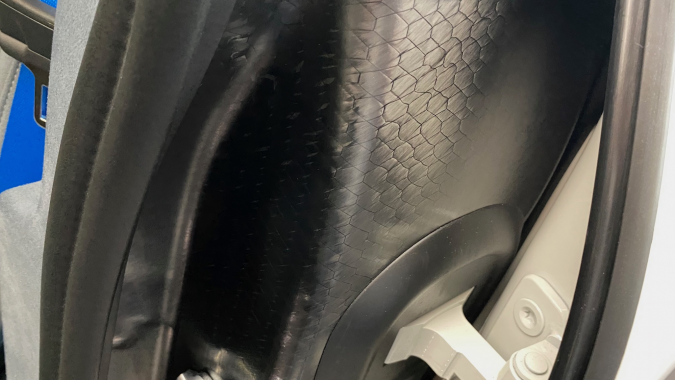