Electric GMC pickup will launch as a 2025 in Canada, features Super Cruise, CrabWalk.

Join the Conversation (0)
The roster of all-electric pickup trucks is quickly growing, with machines from Ford and Rivian already prowling the streets and job sites while others from brands like Chevy are waiting in the wings. Today, their ranks grow even further with the new 2024 Sierra EV Denali Edition 1.

Before diving into the details, we need to make clear that Canadian customers will need to wait a year longer than Americans for a chance to park this electron eater in their driveway. That extra spin around the sun will likely give GMC time to suss out supply chain headaches while getting their feet wet producing the thing and meeting initial demand. The 2025 Sierra EV is anticipated to be available in Canada, but it is worth noting some specs and features shown today may differ slightly since the launch truck is a special Edition 1 trim.

On with the show. GMC says the 2024 GMC Sierra EV Denali Edition 1 is capable of belting out 754 horsepower and 785 lb.-ft of torque when its dual electric motors are set to Max Power mode and the e4WD system is funneling electric horses to all four wheels. Total driving range on a fully charged battery is estimated by GM to be in the neighbourhood of 640 kilometres (400 miles) and is capable of hoovering up enough electricity from an appropriately stout charger to replenish 160 km of range in just 10 minutes. 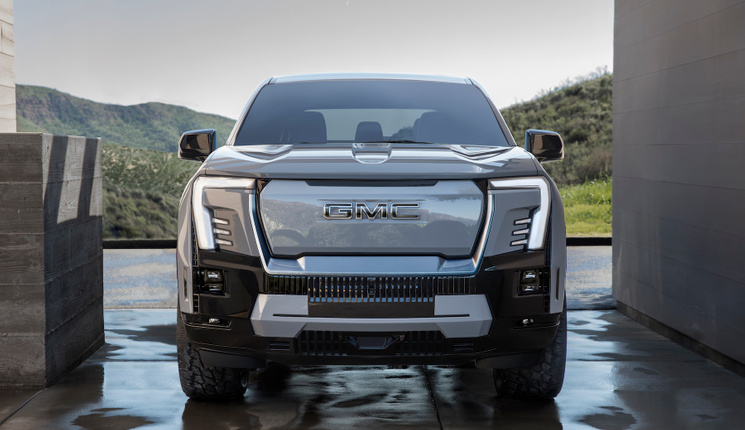 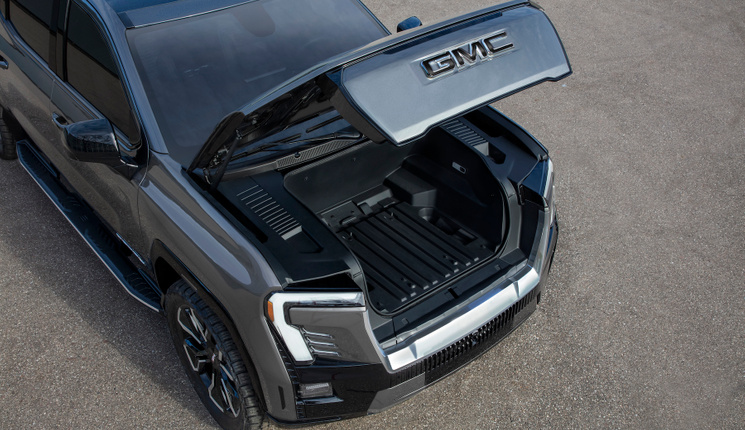 It is unlikely bystanders will confuse this electric Sierra with a gasser. Unique lighting signatures and a grille-less fascia dominate the front end, behind which resides a commodious lockable weatherproof frunk containing a drainage system and power outlets. If its side profile – which is uninterrupted from tip to tail – doesn’t remind some of the long-departed Chevy Avalanche, the split foldable Midgate certainly will. Designed to open the space between the truck’s cabin and cargo box, it extends available room for gear from 5’ 11” to roughly 9 feet. Outlets in the bed contribute to a total of 10.2 kW of off-board power, ready to juice up yer worksite or camping spot.

Speaking of the interior, this is one example in which GMC chose not to simply copy the homework of its brother at Chevrolet. Taking centre stage in the Denali Edition 1 cabin is an enormous 16.8-inch infotainment tablet, situated portrait style and loaded to the gunwales with detailed displays for the truck and can be split to show three apps at once. It appears there are physical controls for audio volume and cabin temperature, by the way. Additionally, the Denali Edition 1 also gets the 11-inch reconfigurable gauge display ahead of the driver plus a 14-inch heads-up display projected onto the windshield. 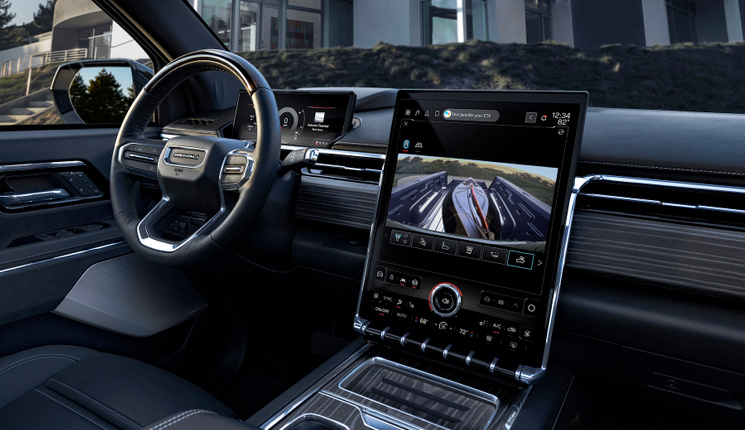 Trim typical of a Denali interior is present, such as a panoramic fixed glass roof and rich quilting pattern on the seats. Customizable drive modes include tow/haul, off-road, and a Max Power mode which enables acceleration to highway speeds in less than 4.5 seconds (GM estimate). Super Cruise, CrabWalk, and four-wheel steering are all part of the Denali Edition 1 trim as is an air-ride suspension.

As with other recent efforts from The General, such as the Hummer EV pickup and Silverado EV, the Sierra EV is built on GM’s Ultium platform. While engineers at GMC are keeping cards close to their chest in terms of battery capacity, we can make a few logical deductions. Top trims of the Silverado EV, which is also estimated to provide 640 kilometres (400 miles) of driving range on a full charge, are said to make use of an Ultium battery with 24 modules. This should peg total capacity around 200 kWh which is in line with numbers suggested for another of Sierra EV’s platform partners, the Hummer EV pickup. 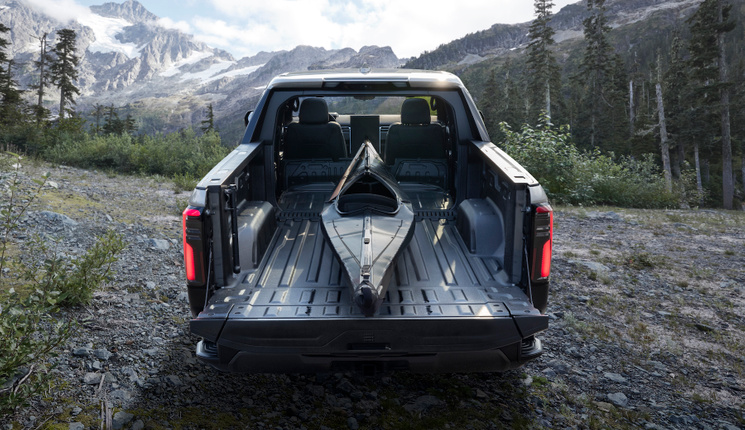 Looking closely at pictures supplied by GMC (and knowing automakers sometimes sneak meaningful numbers into images), the truck’s digital dashboard shows an energy consumption of 2.0 miles/kWh, a sum which works out to 31.25 kWh/100km in Canadian measures. Applying math to that consumption and official range numbers provides a battery capacity smack dab at 200 kWh.

It is unlikely that every single trim of the Sierra EV will be so handsomely endowed in terms of power and range. The forthcoming AT4 and Elevation trims planned for next year may have a smaller battery pack or less-stout motors to keep a lid on costs and will almost certainly have fewer horsepower than this launch model. For example, the Silverado EV RST makes 664hp and 780 tq while the WT makes do with 510 and 615, respectively. GMC indicates the Elevation trim could be half the price of this six-figure Denali Edition 1. 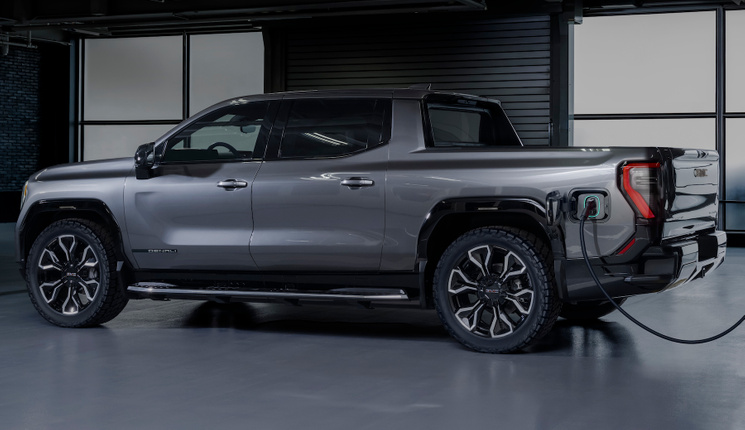 Leaving the impact towing heavy objects has on driving range, it does seem like this GMC is built with at least one eye towards some hauling. Eagle eyes will spot an integrated trailer brake controller to the driver’s left, and that enormous infotainment screen can display weight rating alerts plus info on trailer lighting and tire pressures. Payload for the Denali Edition 1 is listed at 1,300 pounds, while trailering capacity is 9,500 pounds (4,309 kg). This means maxing out the latter will leave just 350 lbs for people and their stuff.

The 2024 GMC Sierra EV Denali Edition 1 is priced at $107,000 in America and will be assembled alongside the Hummer EV pickup at GM’s Factory ZERO Detroit-Hamtramck Assembly, a facility retooled with a $2.2-billion investment devoted to EV production. Future Sierra EVs also will be assembled at GM’s Lake Orion Assembly in Michigan.