Join the Conversation (0)
Toyota’s small car family continues to evolve, not only with new crossovers (Corolla Cross Hybrid) and performance variants (GR Corolla) joining the lineup, but also within the mainline sedan and hatchback offerings.

For 2023, the Corolla sedan and hatchback receive a mid-cycle styling update, along with new equipment and tech features, which apply to both gas and gas hybrid models.

In terms of styling updates, all ’23 Corolla sedans receive a new grade-specific front fascia, LED daytime running lights, with the SE and XSE also receiving redesigned LED headlights. The LE receives a new rear bumper, and a new rear diffuser and 18-inch Gloss Graphite-coloured wheels are in store for the SE and XSE.

On the hybrid side, there are three new all-wheel drive grades: LE AWD, SE AWD and XSE AWD. All grades feature Toyota’s electronic on-demand all-wheel drive system, and the Toyota Hybrid System which uses a 1.8-litre Atkinson-cycle four-cylinder gas engine with two electric motors paired with a CVT. For 2023, a new lithium-ion battery pack is installed under the rear seat for a lower centre of gravity and more trunk capacity.

Finally, on the safety side, Toyota Safety Sense 3.0 is available across the 2023 Corolla and Corolla Hybrid lineup.

Only 200 numbered GR Corolla MORIZO Editions are going to be built worldwide for 2023 and only 10 (!) are ticketed for Canada, so getting your hands on one will be challenging to say the least. 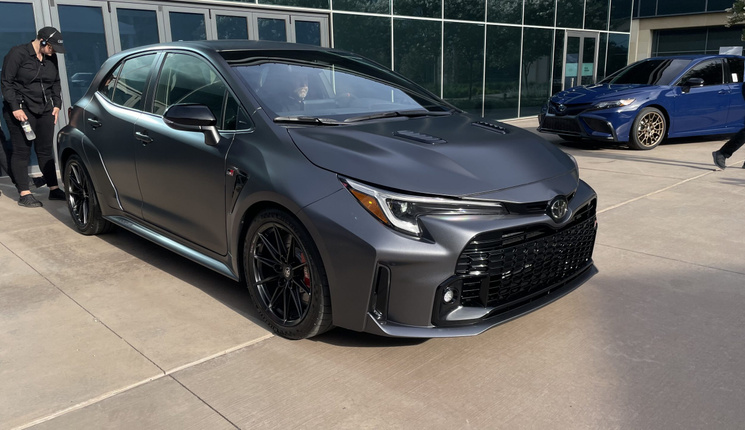 At any rate, as the name implies – Morizo is the nickname for Toyota CEO Akio Toyoda, who is also the company’s GR (Gazoo Racing) Master Driver – this GR Corolla gets a load of track-focused goodies, including a close-ratio transmission, forged wheels, Michelin Pilot Sport Cup 2 tires, and extra torque (295 lb-ft.) from the 1.6-litre turbocharged three-cylinder engine.

The MORIZO also sports a stiffer chassis, front brake ducts, mono-tube shock absorbers, and Ultrasuede-trimmed seats. Maximizing the power-to-weight ratio was a key developmental concern, so the MORIZO Edition has no back seat, rear door speakers, rear window regulator and rear wiper. These deletions have trimmed about 50 kg (100 pounds) from the car’s curb weight (1,445 kg versus 1,495 kg) compared to the regular GR Corolla.

The 2023 Corolla, Corolla Hybrid and GR Corolla MORIZO Edition go on sale later this year. Pricing will be announced closer to on-sale.