There will be 2 electrified options and a V8.

Join the Conversation (0)
With the release of a new Range Rover comes the inevitable: the arrival of the “Sport” version – a move from Range Rover that’s as old as time immortal…well, maybe not but if we are talking about size alone, the Sport is actually closer in size to the original Range Rover than the current Range Rover.

For the uninitiated: the idea behind the Sport model of one of the world’s most well-known SUVs – both in the luxury sphere and otherwise – is to provide all the luxury of its bigger sibling, but in a tauter package both in terms of styling and engineering.

The Sport sits lower than does larger truck, is shorter thanks to smaller front overhangs and is designed to give off the impression that while the full-size Range Rover is meant to haul people, the Sport is meant to haul you-know-what and indeed, the red truck pictured here sure looks ready to do some of that.

It starts with the front fascia, which sports the slimmest headlights ever fitted to a Land Rover vehicle, so much so that they almost looks like something from a concept and destined to the cutting room floor once a final production design got approved. It looks cool but according to Range Rover, it’s actually the rear styling that is the most progressive part of the package. It features more curved corners than previous as well as a lower plate location to visually pull everything closer to the ground below. 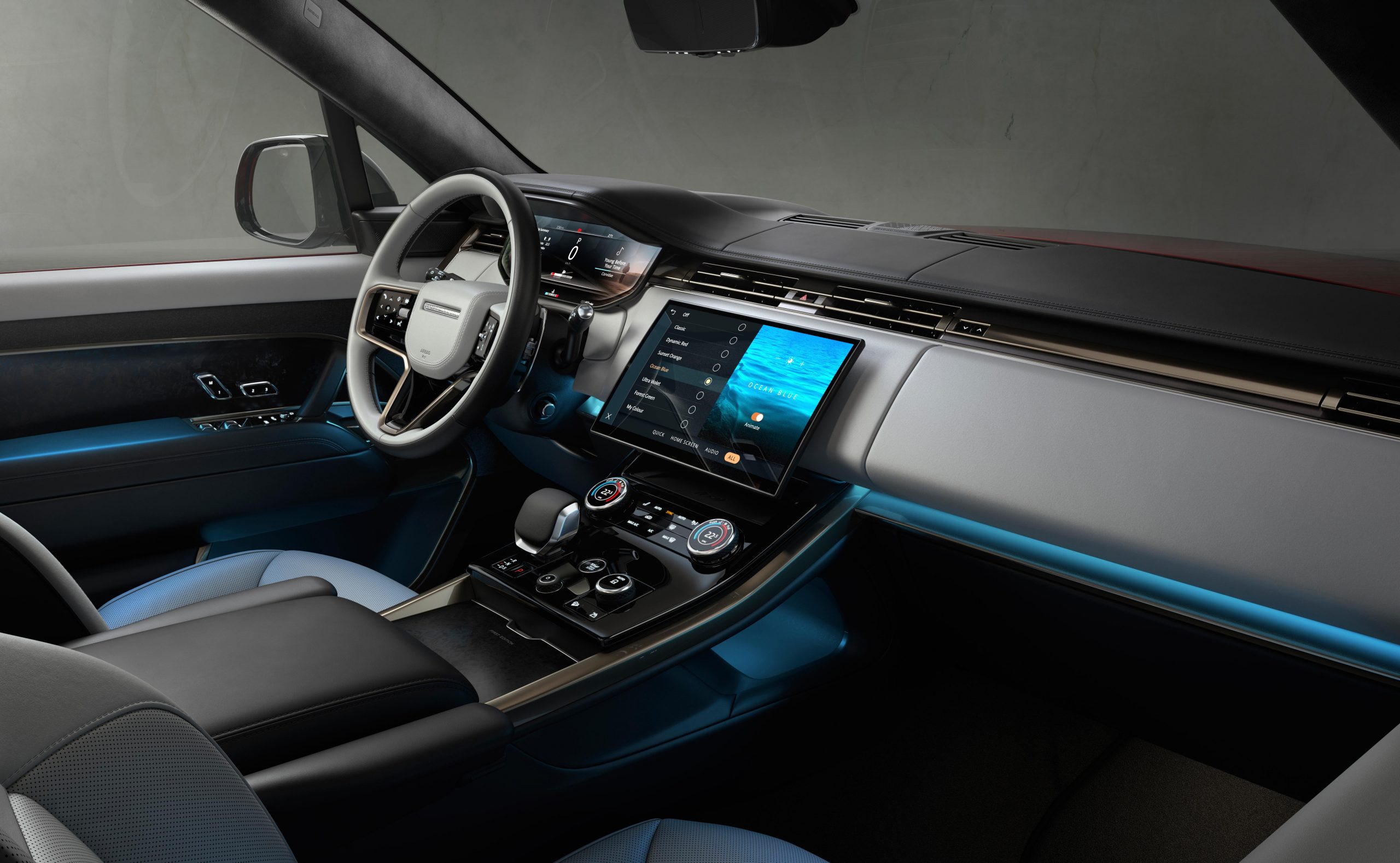 From the side, the new Sport benefits from exterior design manager David Eburah’s fastidious adherence to the requirement to provide broad, flared surfaces that can both extenuate the curves and cuts the Sport gets, but also allow the paint to best highlight details like the lower door crease and high beltline. Add features like black wheels and contrast-colour black roof, and you have a Range Rover that provides a surprisingly different look than does the larger Range Rover models. The door handles, by the way, sit flush until you need them, which both looks cool and improves drag. Probably not by much, but it’s there.

Inside, as is the case with pretty much every new vehicle these days, the proceedings are dominated by the central infotainment screen. Here, it’s curved and measures 13.1 inches (the digital gauge cluster, meanwhile, measures 13.7”) and is your gateway to the optional 29-speaker (four of the five headrests get a speaker of their own), 1,430-watt Meridian audio system as well as an app suite, navigation, wireless Apple CarPlay, Alexa, and wireless Android Auto. Beneath that, we find the climate control system which is actually made up of two traditional dials that only alight if the climate system is activated. Yes, that means the secondary digital display seen on the old Sport is no more, which, if we’re honest is not really that big of a deal. It looked slick enough, but this system will likely be easier to operate when out on the road. 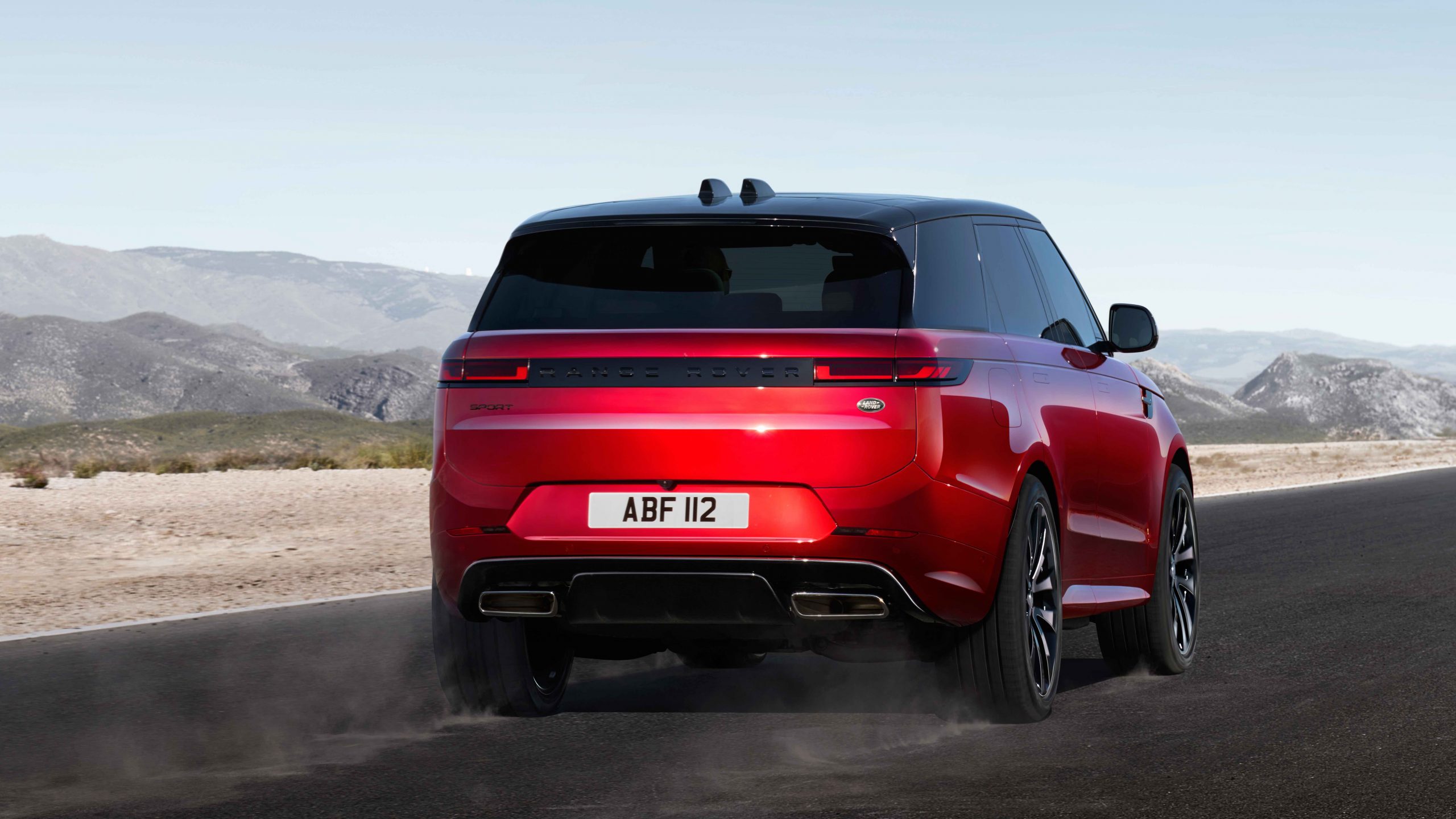 Out on the road and at speed, probably, as this new Sport has the wherewithal to produce plenty of it.

While that last engine makes some wild figures, it’s limited to the First Edition for the first year and while we all love exclusivity, it does perhaps signal that Range Rover knows that the day of the V8 being the hot-selling engine are over. Indeed, it looks as though the P400e is going to be the Sport to grab; it makes good power and you can cruise up to 77 km on a single charge, both aspects of this model that are appealing to a wider array of drivers. Indeed, we were surprised at the launch to find out that there was even going to be a V8 option, let alone one that was going to be more powerful than the outgoing model unless you’re talking about the old model’s SVR trim, which hasn’t yet been announced for this new version.

Of course, this begin a Land Rover it should have off-road chops but surely, this specialized Sport version isn’t meant to go off road, is it? Aha! Not so fast! The chassis is 35 per cent stiffer thanks to the use of boron steel and aluminum, has air suspension that can lift to 5.3” over standard ride height, can wade through 35” of water, climb a 45-degree grade and gets rear-wheel steering whereby the rear wheels can turn up to 7.3˚ for a tight 36-foot turning radius. Add an adaptive off-road cruise control system similar to what we’ve recently seen on the Ford Bronco, and it’s not hard to believe Land Rover when they tell you that they drove against the current up a live spillway at the famous Kárahnjúkar hydro plant in Iceland as part of the Sport’s testing regimen.