Chevy brought power, elegance and performance to their family vehicle

Join the Conversation (0)
It’s the reference car of the 1950s, but more significantly, the 1957 Chevy put real performance in the hands of an entire country and not just sportscar lovers. Until its arrival, sportiness for Chevrolet had been left to the Corvette, which could be comfortably enjoyed by only two people at a time. It was a second car and not primary transportation for the family.

But with Corvette firepower being made available in the everyday ’57 Chevy and its buyers, performance could be enjoyed by the masses, including you and four or five buddies.

But what about the 1955 and ’56 Chevrolets that seem to get lumped in with the ’57? Although they share many of the same mechanical features and ride on similar chassis, the ’57 is the visual standout with its wrap-around grille/bumper combination, twin-rocket hood ornaments and deftly defined rear fins that are easily the car’s most celebrated features. And since the ’58 seemed to take a step backward, it only served to punctuate the ’57’s star-car status. 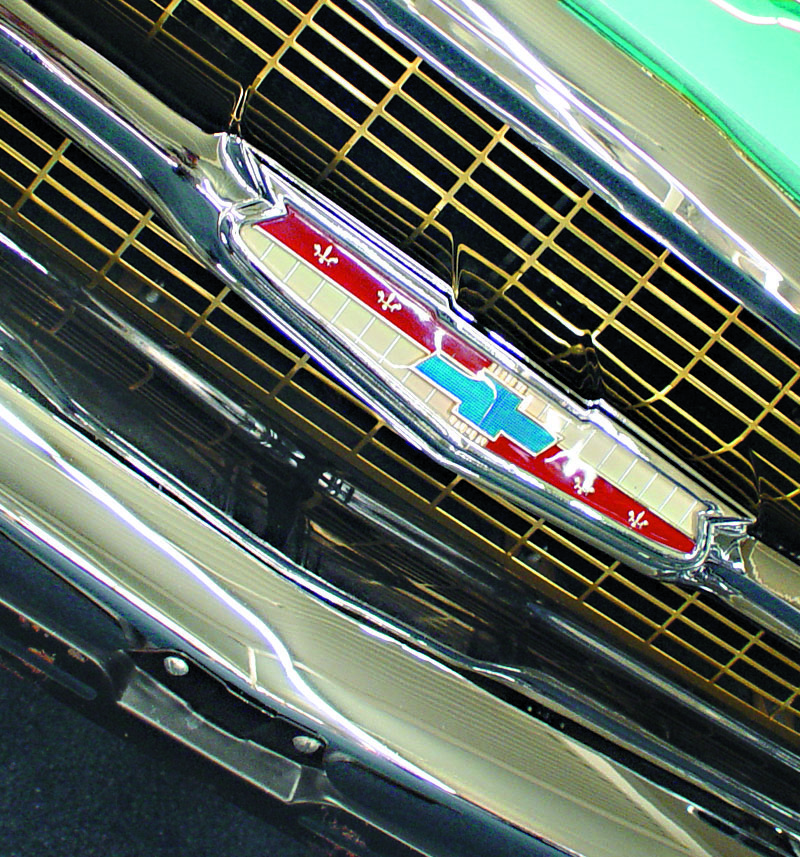 The designers could have taken the over-the-top approach, as did Chrysler stylists with the aircraft-influenced appendages of the Dodge, Plymouth, DeSoto and Chrysler lineup that year. But they restrained themselves and rendered a set of rear fenders with a just-right amount of jet-age shape that made the ’57 appear longer and lower while not looking trendy or controversial.

The Bel Air, Chevy’s top-rung model in a trio that included the price-leader One-Fifty and mid-grade Two-Ten, came with a wide triangular band of stainless-steel trim that made it instantly recognizable, then and now.

Although the ’57 Chevy was only a couple of inches longer than the previous year’s car, it was actually lower by 1.5 inches (four centimetres). Part of the height reduction was attributed to the 14-inch wheels (15s were on the 1956 cars), as well as modifications made to the car’s suspension. The rear leaf springs were relocated closer to the rear wheels and the ladder-type frame was stiffened with additional cross-bracing. The net effect was a more controlled ride and improved handling. 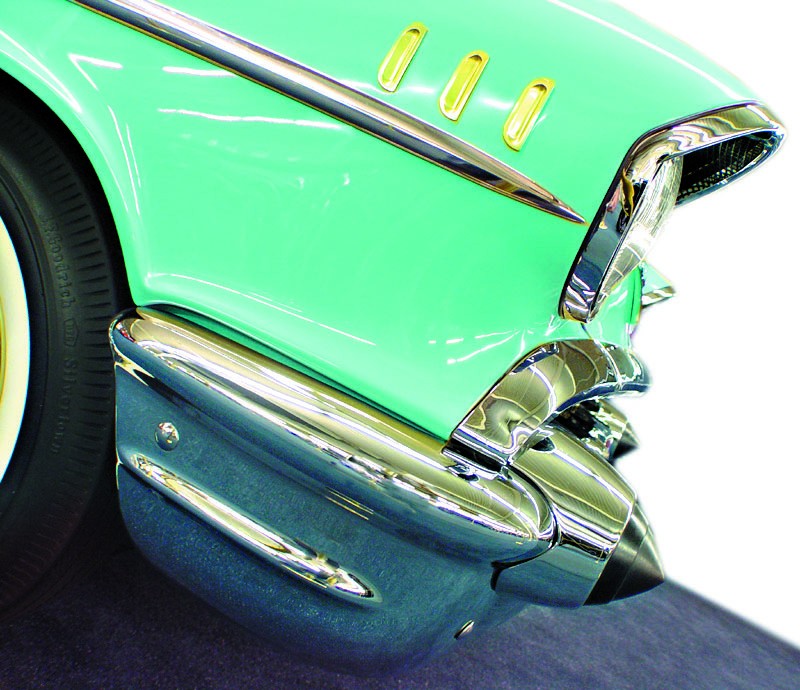 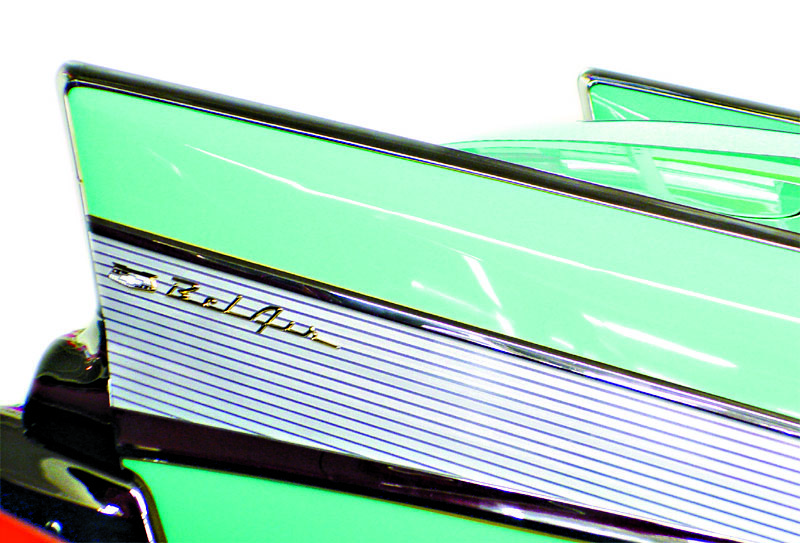 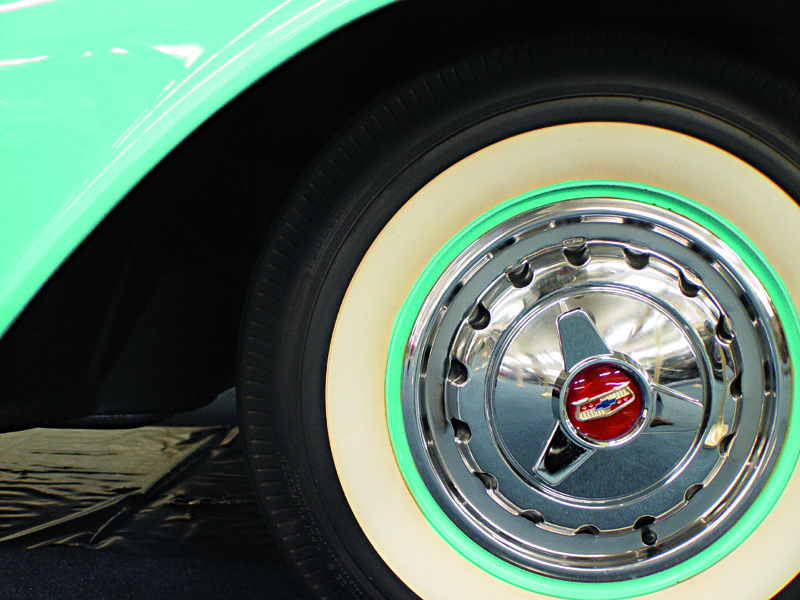 With 19 separate models, including coupes, sedans, hardtops, wagons and convertibles, most buyers had no problem finding a Chevy to fit their lifestyle or pocketbook.

Power sources were equally diverse. The starting point was a 235-cubic-inch Blue Flame six-cylinder engine that generated 140 horsepower. The base V-8 was the 162-horsepower 265-cubic-inch unit that was first developed for the 1955 Chevy.

The big news for ’57 was the addition of a 283-cubic-inch V-8 to the options list, similar to the one found in the Corvette. This engine, however, which was a variant of the 265, could be ordered in one of six different horsepower ratings, ranging from 185 all the way up to 283.

For most buyers, however, flat-out speed was less important than the Chevy’s perfectly proportioned styling and affordable nature.

These days, many 1957 Chevrolets have been restored to better-than-new condition. But for every numbers-matching creampuff, there are cars that have been transformed into rip-snorting street machines with the latest high-performance parts under the hood. Chevy might have intended it to be that way, but it’s doubtful that the company could have forecast the car’s amazing popularity.

Despite this, by the end of the 1957 model year it was Ford and not Chevy that managed to sell the most cars (although GM held off Ford in total car and truck production). Today, however, it’s the fabulous ’57 Chevrolet that commands the most attention, as much for what it stands for as the way it looks.