Feel the Rush and the Cold: Red Bull Frozen Rush 2016

Now in its third annual installment, Red Bull Frozen Rush takes competitive Pro 4 trucks out of their typical off-road environment – dirt, mud, and more – then they place them on a ski hill, on snow and ice.

Sunday River, MA.– It’s not your typical Friday morning at the Sunday River Ski Resort in Maine. Sure, skiers and snowboarders are abound, but there’s a different kind of buzz surrounding the popular tourist destination.

That buzz, nay, intense rumbling, comes from engines that produce over 900 horsepower.

Those specifically there for the Red Bull Frozen Rush (RBFR) event know exactly what they’re in for.

The unsuspecting rest? They’re in for a real treat.

RELATED: Auto Racing: The 50th Team Penske anniversary that might not have been

Now in its third annual installment, RBFR takes competitive Pro 4 trucks out of their typical off-road environment – dirt, mud, and more – then they place them on a ski hill, on snow and ice. They race up and down this closed course, which allows drivers to drift through intense turns, catch air over some intense jumps and give the crowd a great show. 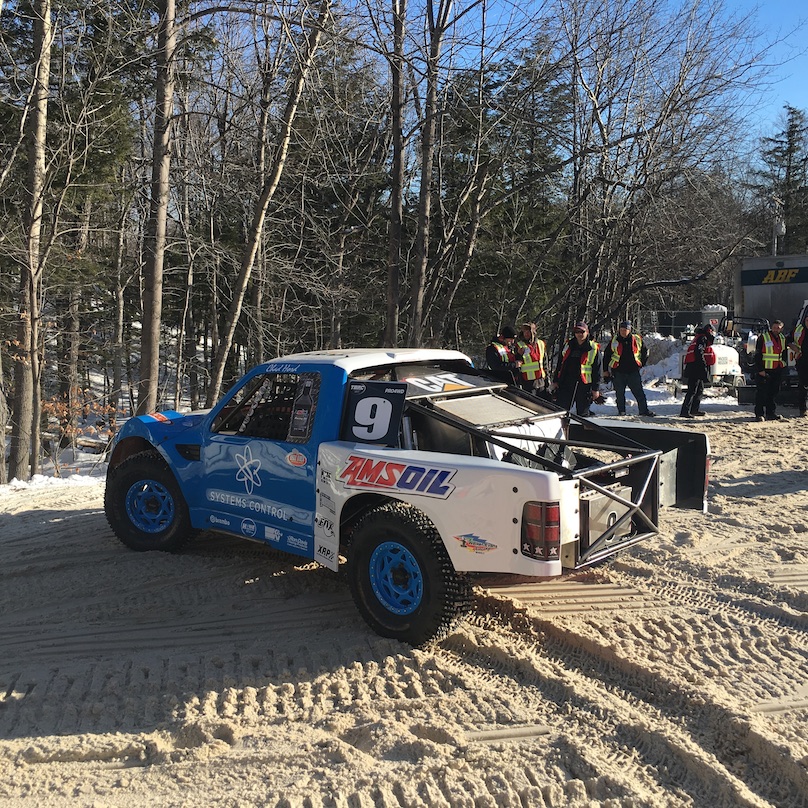 But all of this wouldn’t be possible if these machines weren’t modified specifically for the event.

The main ingredient for success on this type of surface is, of course, the tires.

BFGoodrich is no stranger to creating performance tires for the road less traveled. Think about their impressive accolades, which include 85 overall victories in the Baja Mexico peninsula, including back-to-back SCORE Baja 1000 wins.

That said, a purpose-built FR2 race tire was specially designed for the Red Bull Frozen Rush event by BFGoodrich engineers, and based on tires manufactured at the company’s race tire shop in Tuscaloosa, Alabama.

What are they made of? Nearly 700 alloy studs are affixed to each FR2 tire in precise locations to provide the right mix of traction and turning ability for the course. 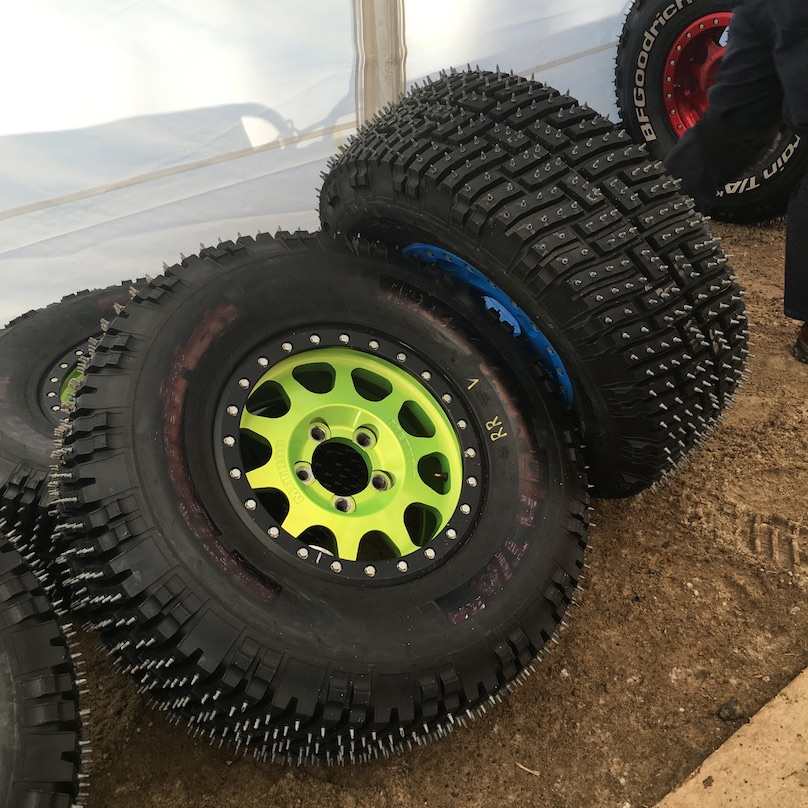 Ideally, the colder the conditions the better.

In 2016, it proved to be a not-so-frozen rush since the week prior to the event, the ski hill barely had snow.

Thank goodness that a little love from Mother Nature and some snow machines were able to make the event come to pass once again.

RBFR is part of the Signature Series of Red Bull events. It’s one-of-a-kind and brings in a lot of great energy from locals and out of towners.

Having a VIP parking spot certainly helped breathe in the ambiance of over 10,000 enthusiastic spectators, as well as land a few great shots of the drivers launching their machinery into the air by the start/finish line. 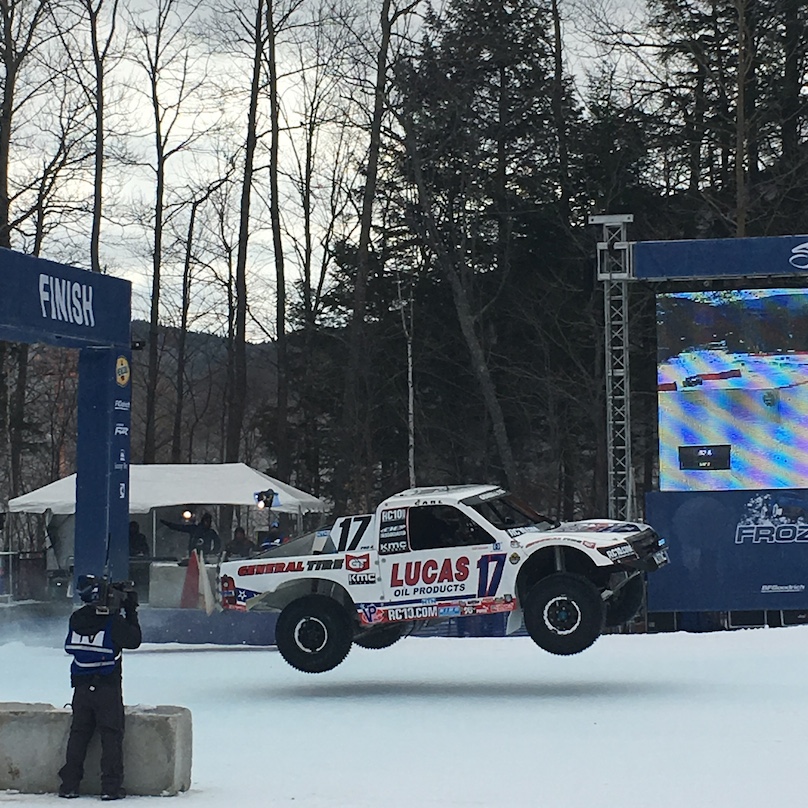 As one would expect, the music was blaring and the crowd was getting fired up by none other than their famous drink. There was a DJ spinning beats, which got the masses moving, and also interviews with pro athletes.

The trucks raced two at a time, and the winner would then proceed to the next round.

While I was a little skeptical that this type of racing could be entertaining or enthralling, I was soon proven wrong. I joined in with the crowd to cheer on the winners and was sad when the driver of my choice didn’t qualify for the next round!

The top prize of the day went to Bryce Menzies, who was also the 2015 champion. 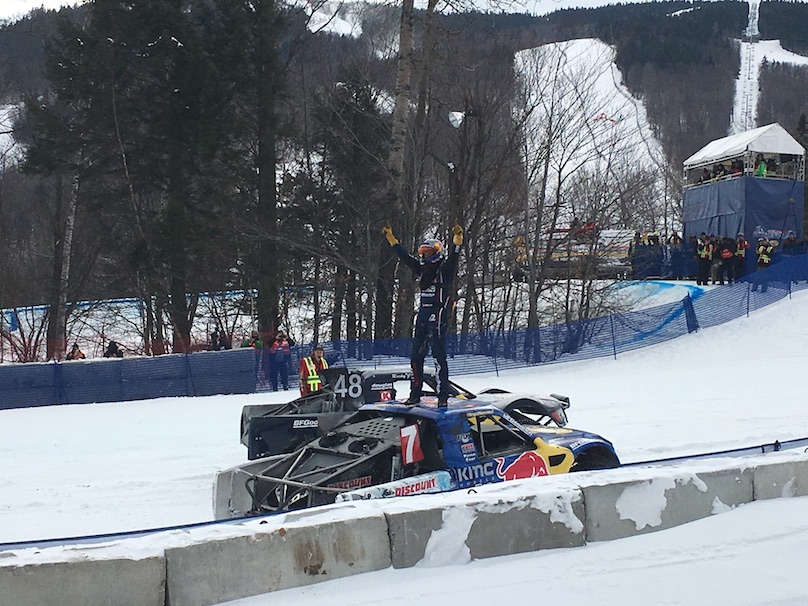 Though I didn’t get to captain my own Pro 4 truck, I did have another opportunity to feel like a hero on a different kind of purpose-built tire, and one that consumers can readily purchase.

When BFGoodrich’s All-Terrain T/A KO2 tire was launched in late 2014, the harsh terrain surrounding the Lake Louise area in Alberta was an ideal proving ground for its strengths.

The tires and I met again on even more challenging terrain, along with a handful of Jeep Wrangler Rubicons. 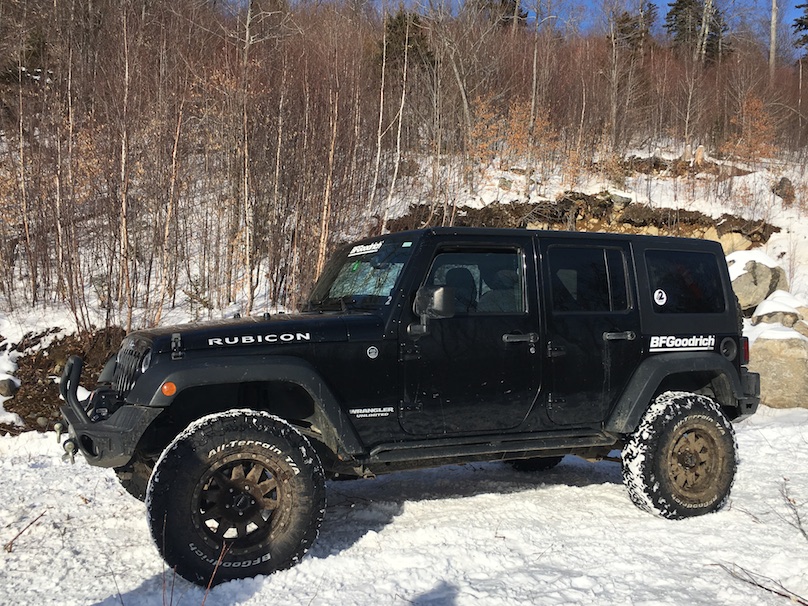 Rocks with edges so sharp you feel like they could slice you just by looking at them were no match for these tires. Steep climbs and perceptively steeper descents made for a heart-pumping and exciting day off the beaten path.

Even on the road, the KO2s don’t make too much noise and are comfortable for everyday use.

Whether I was standing by and watching the Red Bull Frozen Rush or taking my own truck for an adventure, there wasn’t a shortage of good times or memories.

Red Bull puts on one heck of a show – not a surprise – and BFGoodrich makes sure the show keeps rolling along smoothly.

Details on the Red Bull Frozen Rush can be found here