Fasten your seat belt, these rides are scary.

Horror maestro Stephen King blamed his over-active imagination for “Maximum Overdrive,” the corny cars-come-to-life movie he directed that hit theatres 35 years ago this July. Based on his short story, “Trucks,” the action comedy focusses on machines, mostly of the four-wheeled kind, that turn on humanity.

As a child cars and trucks terrified King. “They seemed so large, and I seemed so small. I had the same imagination then as I do now,” he told Bobbie Wygant in a TV interview in 1986. “Bulldozer treads looked so cruel. I would imagine what would happen to my little fingers if they started to move by themselves.”

Another Stephen, director Spielberg, reached back to his childhood to conjure up “Duel,” his 1971 ABC Movie of the Week about a massive, malevolent tractor-trailer that terrorizes the driver of a Plymouth Valiant. The road rage movie, he told fellow director Edgar Wright in 2018, “Was about my fear of going to school because there were big kids who would go after me and would make my life a ruin.”

Spielberg even went so far to put a human appearance on the bully truck by “casting” a 1955 Peterbilt 281. You never see the truck’s driver, but the director thought the vehicle’s split windshield, rounded lights, and elongated hood suggested a suitably menacing face.

“Was the truck in ‘Duel’ evil?” Slotek asked “Or was the guy behind the wheel evil? We never got to see him, and in fact, you don’t see the face of most drivers, especially with tinted glass these days. That anonymity (and the tendency to act out angrily that it gives people) is scary.”

Ultimately, car-centred horror works because we’re meant to feel safe and in control in our cars. Take that away and all bets are off. Here are five films you will want to buckle-up for.

Christine, the 1958 Plymouth Fury with a mind of its own, is the most famous of all cinematic killer cars. Based on a Stephen King novel of the same name, the 1983 film is about a nerd who comes into possession of Christine, a possessed auto that goes on a killing spree to protect its owner and can also repair itself after accidents. To create the effects of the car coming back to life, hydraulic jacks mounted inside the car would pull the outsides of the car inwards. Director John Carpenter then ran the film backwards to create the illusion of self-repair. 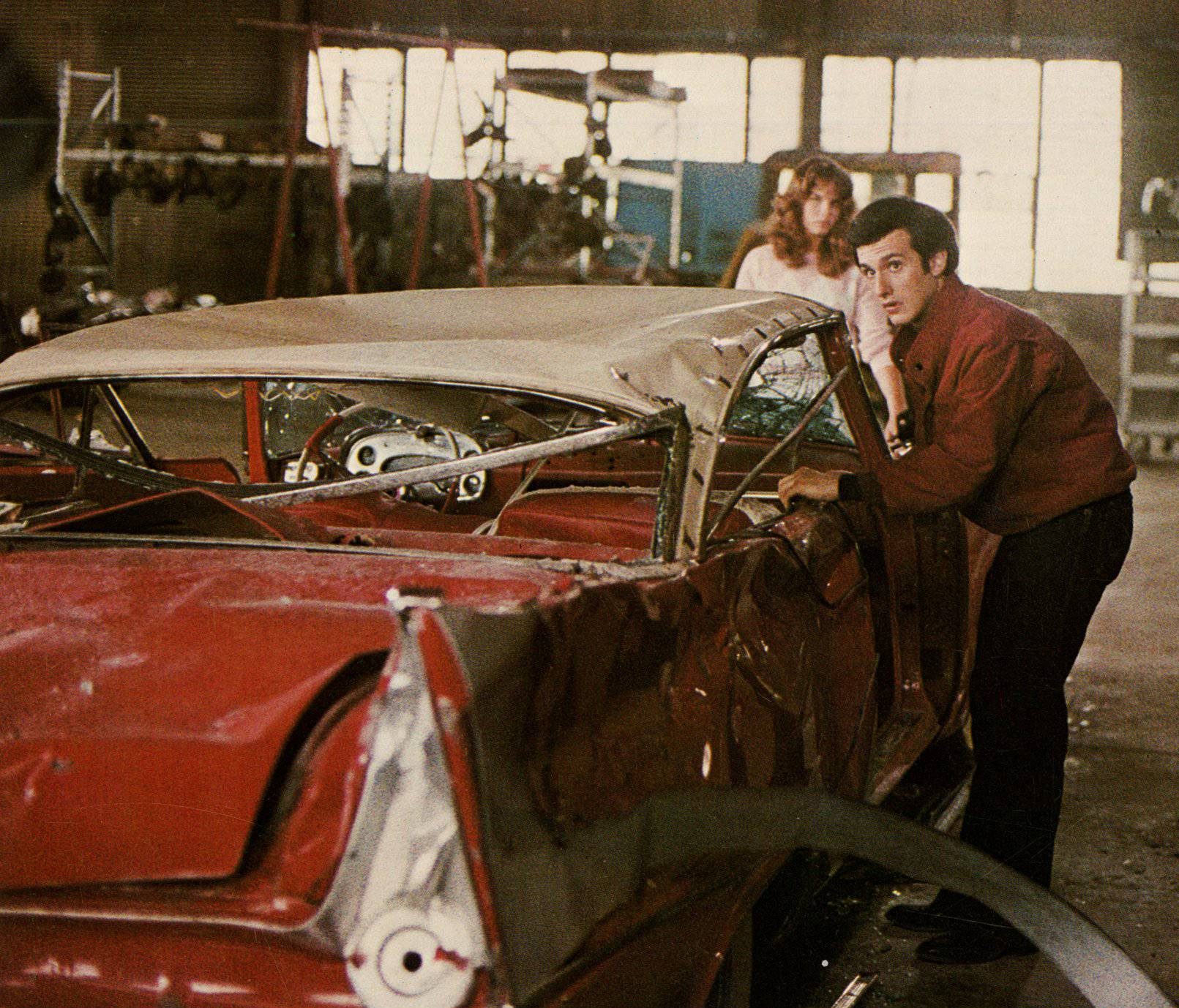 cns-0218Eroticism – The plot of Christine  a 1983 movie based on a Stephen King novel  centres on nerdish high school who sets about restoring a dilapidated 1958 Plymouth Fury. With story by David Menzies for Canwest Auto package. (Handout photo/National Photo) Still from Stephen King movie ‘Christine’

Starring James Brolin, this 1977 film is about a mysterious car that terrorizes a small town. To give the 1971 Lincoln Continental Mark III at the heart of the story a more sinister look, legendary Batmobile customizer George Barris lowered the Continental’s roof three inches and increased the length and height of the side fenders. Sleek but menacing, the car is a killing machine. No driver, just more than 2,265 kilograms of gas-guzzling evil with a propensity for hit-and-run murders.

“The Wraith,” streaming on Amazon Prime

The revenge-happy 1986 Dodge M4S Turbo Interceptor concept car, possessed by the spirit of a dead street racer, in “The Wraith” is no ordinary vehicle for a few reasons. In the 1986 movie, the car seeks revenge on those responsible for the racer’s death, killing them off one by one. Built at a cost of $1.1 million, the vehicle was a joint, high performance design effort of the Dodge Division of Chrysler Motors and PPG Industries. The prototype is only seen in close-ups. Six other versions were made on dune buggy chassis for use in crash sequences.

“The Hearse,” available on LinkedFilm.com

What car carries a more sinister vibe than a hearse? Especially a hearse haunted by the vengeful ghost. In 1980s “The Hearse,” a marauding 1951 Packard Funeral Coach, a “phantom on wheels,” searches old country roads in Northern California in search of victims. More campy than scary, and with a plot full of devil worshipping locals, this one will appeal to classic car lovers more than horror fans.

Quentin Tarantino has a thing for the Chevy Nova. The car features in both “Reservoir Dogs” and “Pulp Fiction,” but the director’s most diabolical use of the Chevy is in 2007’s “Death Proof.” Kurt Russell plays Stuntman Mike, a maniac who uses his car to commit vehicular murder in staged accidents. In this fun romp, Tarantino pays tribute to some of the most famous car movies of all time: the Chevy’s license plate, JJZ-109, is the same as the one on Steve McQueen’s Ford Mustang Fastback in the classic car chase film “Bullitt,” and one storyline revolves around a 1970 Dodge Challenger, like the one in the 1971 film “Vanishing Point.”