Jim Kenzie decides that the time has come to hang up his metaphorical mesh-back driving gloves.

So much for career planning.

A few years later, I dropped into the Sheldons, our neighbours here in rural Milton, to borrow a tool from the “other Jim”. His wife Pam said, “You know a lot about cars. Can you write?” Turns out a young man had hired Pam as editor of a new newspaper in Milton to compete with “The Canadian Champion”, the longest-running community paper in the country.

Initially, the new newspaper was called The Milton Month, and subsequently, The Milton Weekly Tribune. The owner figured if they ran a car column, it would be easier to sell ads to car dealers.

The Driver’s Seat was born. We even won a couple of Ontario Community Newspaper awards for our coverage. When “The Trib” went under, I approached the editor of The Champion to see if he wanted to pick up my column. Effectively, his response was, “Don’t call us, and we won’t call you.” Still at Ryerson, later as a partner in a computer consulting firm, I did some freelance writing for various publications, keeping my hand in it, waiting for my break.

During this time, I was part of “The Hot Tub Group” (long story…) that led to the formation of the Automobile Journalists Association of Canada, to bring car writers and broadcasters together to help establish better professional ethics in our industry. I was quite proud of the fact that I came up with the organization’s name because the French translation – Association des Journalistes Automobile du Canada – ended up with the same acronym in both official languages – AJAC.
Through a process too lengthy to go into here, I snagged the car-writing gig for The Toronto Star.

Initially, the column was buried in the Monday paper after the rutabaga recipes. But still, it was The Toronto Star. I got invited to more “press trips” where we got to drive new cars before they had been revealed to the public.

One of the people I met on these events was the editor of The Canadian Champion. He said, “You weren’t as good a writer then as you are now.” Funny how I could learn so much in just a couple of years.

We subsequently became friends and laughed about our first encounter. A year and a half later, the late Dennis Morgan, an editor at The Star, told me about a plan to create an entire section on cars, which would appear in the big Saturday paper.

Thus began the Wheels section. During its peak years over the next three decades, it was often a double section, 64 pages or more. If you folded it into quarters, you’d have a 256-page “car magazine” with a weekly circulation of over 600,000. Monthly, that was 2,400,000, making it effectively the largest-circulation automotive publication in the world. The traveling got more intense. Covered every continent except Antarctica. (Do they even have roads there?) Among the highlights: Chile (The Atacama Desert with Audi). Costa Rica (Lexus). South Africa (several times, including Jaguar and Porsche).

Driving on the Autobahn with no speed limits. My personal land speed record is 300 km/h in a Mercedes-Benz SLR McLaren roadster. Traversing Mongolia north to south in Land Rovers.

Again with Land Rovers, being part of a crossing of the Great Western Desert in Australia, and following La Ruta Maya in Belize.

I also got to drive and/or race on some of the world’s great tracks. Mosport – still one of the most challenging anywhere. Mont-Tremblant. Montreal’s Grand Prix circuit (not in Formula One cars, but in race-prepared VW Beetles).

In the USA: Road Atlanta. Watkins Glen. Daytona. Internationally: Nurburgring, both Grand Prix and Nordschleife circuits. Spa in Belgium. Monaco, but at about 40 km/h – it is public roads except when there’s a race on. One lap of Spain’s Circuit de Barcelona-Catalunya in a quasi-Formula One car. Several others.

The most life-changing competitive event was when Doug Mepham invited me to navigate for him in Targa Tasmania in his old Volvo. Targa is a week-long around-the-island event where the police close the roads and tell you to drive faster. On the ferry coming back to Melbourne from Launceston Tasmania, we got to thinking – what if you had an island like Tasmania; a welcoming population like Tasmanians; a place that could use some tourism dollars like Tasmania.

I may have been the first person to use the words “Targa” and “Newfoundland” in the same sentence, right here in Wheels. 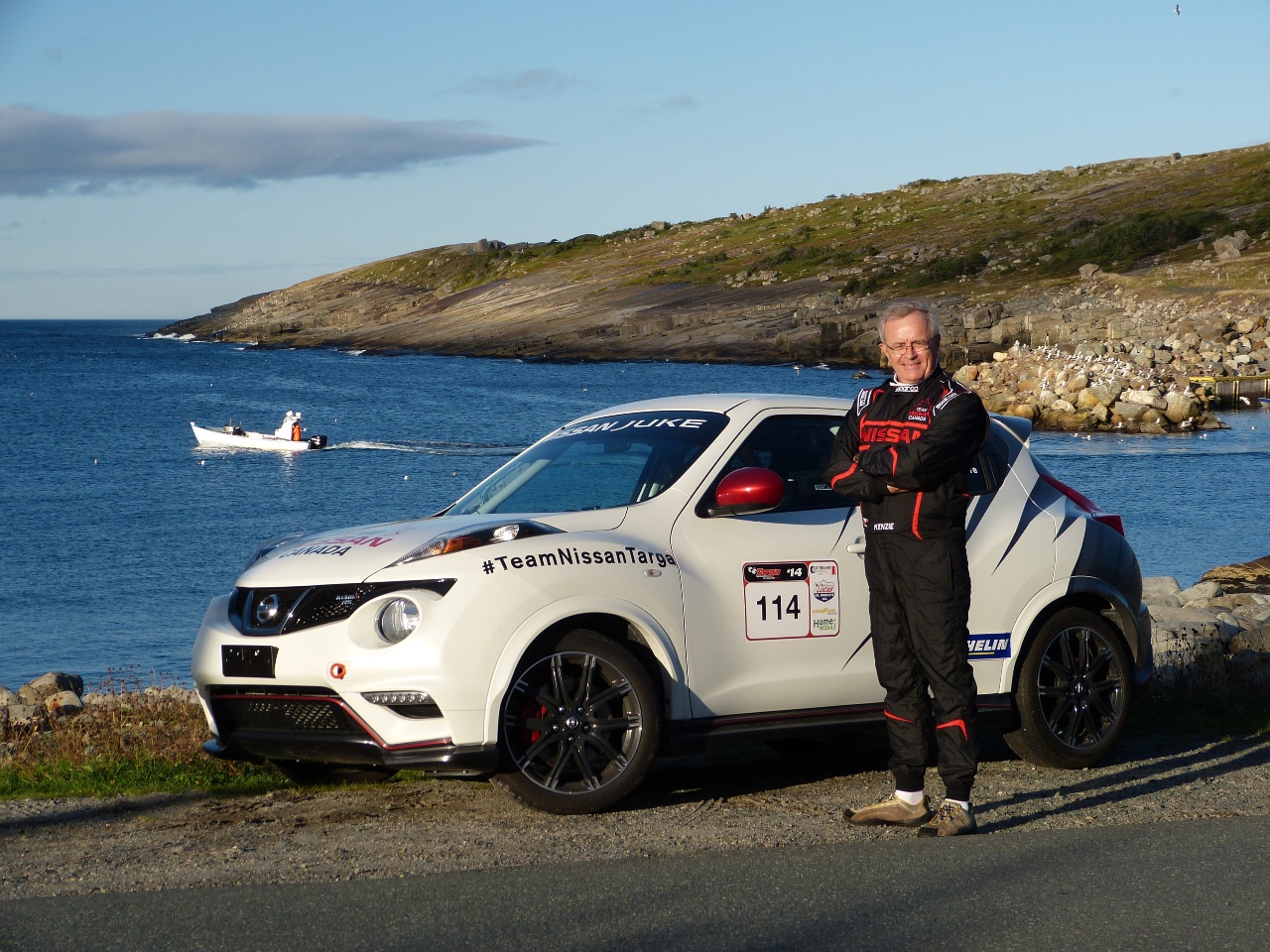 Doug contacted Robert Giannou, a racing buddy he knew in St. John’s, and a year and a half later, Robert had organized the first Targa Newfoundland. The most fun you can have in a car.

Doug and I did the first one in the Volvo. Subsequently Cort Nielsen, then the PR guy for MINI, came up with a series of MINIs for me to drive. I’m far from the fastest guy on a given track. But I can get to about 90 per cent of my capability pretty quickly. Turns out if you try to drive at ten-tenths in a Targa, you’ll end up being part of the scenery.

Which I did manage once – a double end-O at a buck-sixty.

But I also managed three victories in the Open Division (for “unlimited” cars), two in the pre-crash MINI JCW, and one in a JCW MINI Challenge car. These successes were largely attributable to the expertise and calming influence of my navigators, Brian Bourbonniere of Lawrenceville Nova Scotia, and Ray Felice of Guelph. Post-pandemic, I hope Targa returns.

At one point I had lunch with PR man Dennis Clark. I was looking for ways to augment my income. He said that many of my readers would love my job – driving cool cars in exotic locales – as long as they didn’t have to actually write about it. Thus was born the concept of the Autobahn Fantasy Tour, a week-long circumnavigation of Germany in Audis, BMWs, Mercedes-Benzes and Porsches, culminating in a one hour lapping session on the Nordschleife.

We ran that three times. Did two similar “Rule Britannia” tours in England, and two non-driving events to the Gran Premio d’Italia at Monza (“Forza Italia”), and another to the first US Grand Prix held at the Indianapolis 500 circuit. Guests on those events talk about them to this day.

I got interested in photography, and started a Car Calendar, which ran for fifteen years. We raised some $70,000 for our beneficiary SmartRisk, which evolved into Parachute. I can’t say that this job represents my wildest dreams having come true, because I could never have imagined a job as good as this one has been.

But as the lyrics of a Pete Seeger song, lifted largely from Ecclesiastes 3:1-8, say, “to every thing there is a season, and a time to every purpose…”.

I’ve been doing this job for almost 38 years. It obviously can’t last forever, and I’ve decided that the time has come to hang up my metaphorical mesh-back driving gloves. I’m going to miss it. I’ve obviously driven some great cars and a few not so great; visited some fabulous places; and met a lot of some fascinating characters.

I want to thank all the people who helped make this happen – too long a list to denote here.
The car companies, for having faith that I wouldn’t wreck their cars (a few minor dings here and there…).

And mostly, to you, my readers, without whom none of this could have happened.

In closing, let me turn to a stretched-metaphorical phrase lifted from the best book I ever read (twice now, working through the third go-round), “The Hitch Hiker’s Guide to the Galaxy – A Trilogy In Five Parts” by Douglas Adams. (You just gotta love that title…).

“So long, and thanks for all the fish.”