Faced with a Choice, Garcia Went to Sports Cars and He’s Never Regretted it

BOWMANVILLE, ON – Guys like me talk to guys like Corvette Racing’s Antonio Garcia in hopes of hanging a story on a quote. So we’d been chatting for about 10 minutes the other day when bingo! Garcia said: “Motorsport is more than Formula One.”

You betcha, I thought. Formula One might be the pinnacle, but the pinnacle is boring these days. Everybody’s going crazy about last Sunday’s Austrian Grand Prix, won by somebody other than Lewis Hamilton. But trust me, things will be back to normal lickety-split and we’ll all be yawning again shortly.

IndyCar has its moments but there’s an awful lot of follow-the-leader in that series, too. If you want non-stop action, though, look no further than sports car racing and that’s why Garcia and I were talking about this weekend’s Mobil 1 SportsCar Grand Prix presented by Acura, a round of the IMSA WeatherTech SportsCar Championship, being held at Canadian Tire Motorsport Park north of Bowmanville.

For the uninitiated, sports car racing involves “classes” of race cars all competing on the same circuit at the same time. In this weekend’s headline event, a two-hour, 40-minute sprint that will get the green flag shortly after 1 p.m. on Sunday, you’ll have fire-breathing Daytona Prototypes competing in their own race while three  classes of lesser-powered cars, the LeMans Prototype 2 (LMP2), the GT-LeMans class (GTLM) and the GT-Daytona (GTD) will also be on track.

“It’s just part of endurance racing,” said Garcia. “While you’re doing your own race, there’s other races going at the same time. You can sometimes make the traffic go your way. You’re not fighting them, you’re racing with them and it sometimes can go in your favour but  . . . sometimes not.”

Garcia, who co-drives the No. 3 Corvette with legendary veteran Jan Magnussen, was undoubtedly thinking of the finish of last Sunday’s Sahlen’s Six Hours of the Glen at Watkins Glen, N.Y., where he lost the GTLM race to the Porsche 911 RSR of Nick Tandy (Patrick Pilet) by 0.452 seconds. With two laps to go, he was about the launch a passing attempt on Tandy when a more powerful and faster Daytona Prototype suddenly slotted in between them.

“It broke my momentum” he said, of the intruder. “I dropped back about half a second and (after the Prototype moved on) the best I could do was get back up to his (Tandy’s) tail. I was really close by the time we got to the ‘bus stop,’ but the second half of the course is very difficult to pass. I would have liked one or two more laps.” 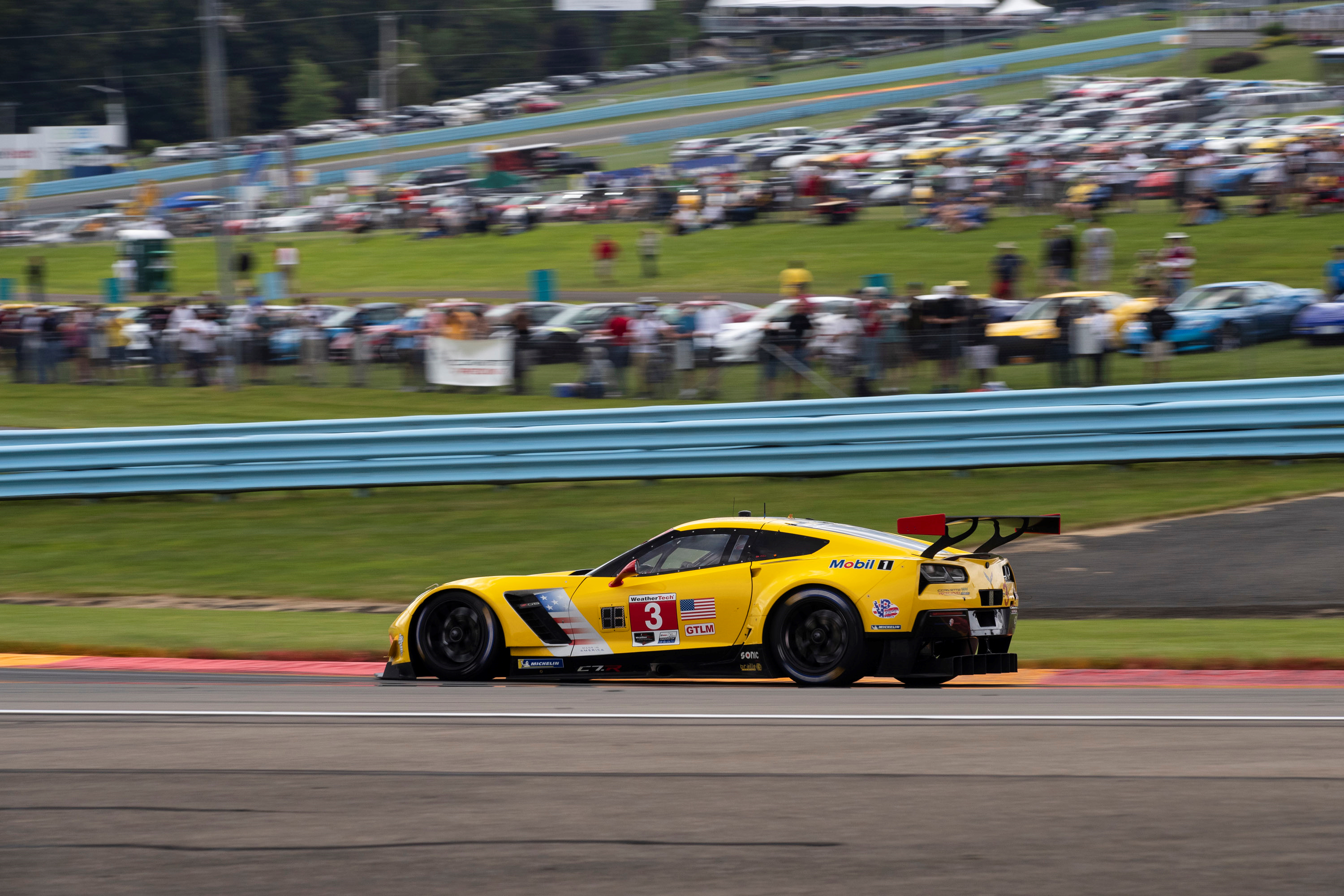 Porsche has won the last four WeatherTech races but Corvette Racing will be looking to break that string this weekend. The Corvette team has won 11 times at CTMP, most recently in 2014 when Garcia and Magnussen took the GTLM class victory. The team will look to make it an even dozen on Sunday with Magnussen, who’s won five class victories dating back to 1999, and Garcia as well as the sister-car pairing of Oliver Gavin sharing the No. 4 C7.R with Marcel Fassler, who’s been recruited to stand in for the injured Tommy Milner.

The WeatherTech championship season is half over and competition couldn’t be tighter. Only one point separates first from second in the Daytona Prototype international (DPi), LMP2 and GT Le Mans (GTLM) classes.

In DPi, No. 6 Acura Team Penske ARX-05 co-drivers Juan Pablo Montoya and Dane Cameron have 177 points, one more than second-place Felipe Nasr and Pipo Derani in the No. 31 Whelen Engineering Cadillac DPi-V.R. The third-place team in DPi – Helio Castroneves and Ricky Taylor in the No. 7 Acura Team Penske DPi – are right there too, trailing their championship-leading teammates by just four points.

In the LMP2 class, it’s the No. 38 Performance Tech Motorsports ORECA duo of Cameron Cassels and Kyle Masson holding the thinnest of leads, 131-130, over No. 52 PR1 Mathiasen Motorsports ORECA driver Matt McMurry, who heads to CTMP carrying the momentum of back-to-back victories in May’s Acura Sports Car Challenge at Mid-Ohio and the Sahlen’s Six Hours of The Glen last Sunday. McMurry will be partnered for this race by Indy Lights driver Dalton Kellett of Toronto.

It’s a close one in GTLM, too, with No. 911 Porsche GT Team 911 RSR co-drivers Tandy and Pilet atop the standings with 152 points. They are one point ahead of a two-way tie for second between their teammates in the No. 912 Porsche, Laurens Vanthoor and Earl Bamber, and two-time defending GTLM champions Garcia and Magnussen in the No. 3 Corvette C7.R.

Only the GT Daytona (GTD) class points leaders have a little bit of breathing room. In the overall WeatherTech Championship standings, No. 86 Meyer Shank Racing Acura NSX GT3 co-drivers Trent Hindman and Mario Farnbacher – who picked up their first win of the season last Sunday at Watkins Glen – hold a 16-point advantage, 119-103, over second-place Jack Hawksworth and Richard Heistand in the No. 14 AIM Vasser Sullivan Lexus RC F GT3. The “AIM” in that team’s name, of course, is the Willis brothers’ AIM Autosport operation out of Woodbridge. And although they are trailing at the moment, Pfaff Motorsports’ Porsche entry with Scott Hargrove and Zach Robichon driving are expected to be a factor this weekend at what is their home race. 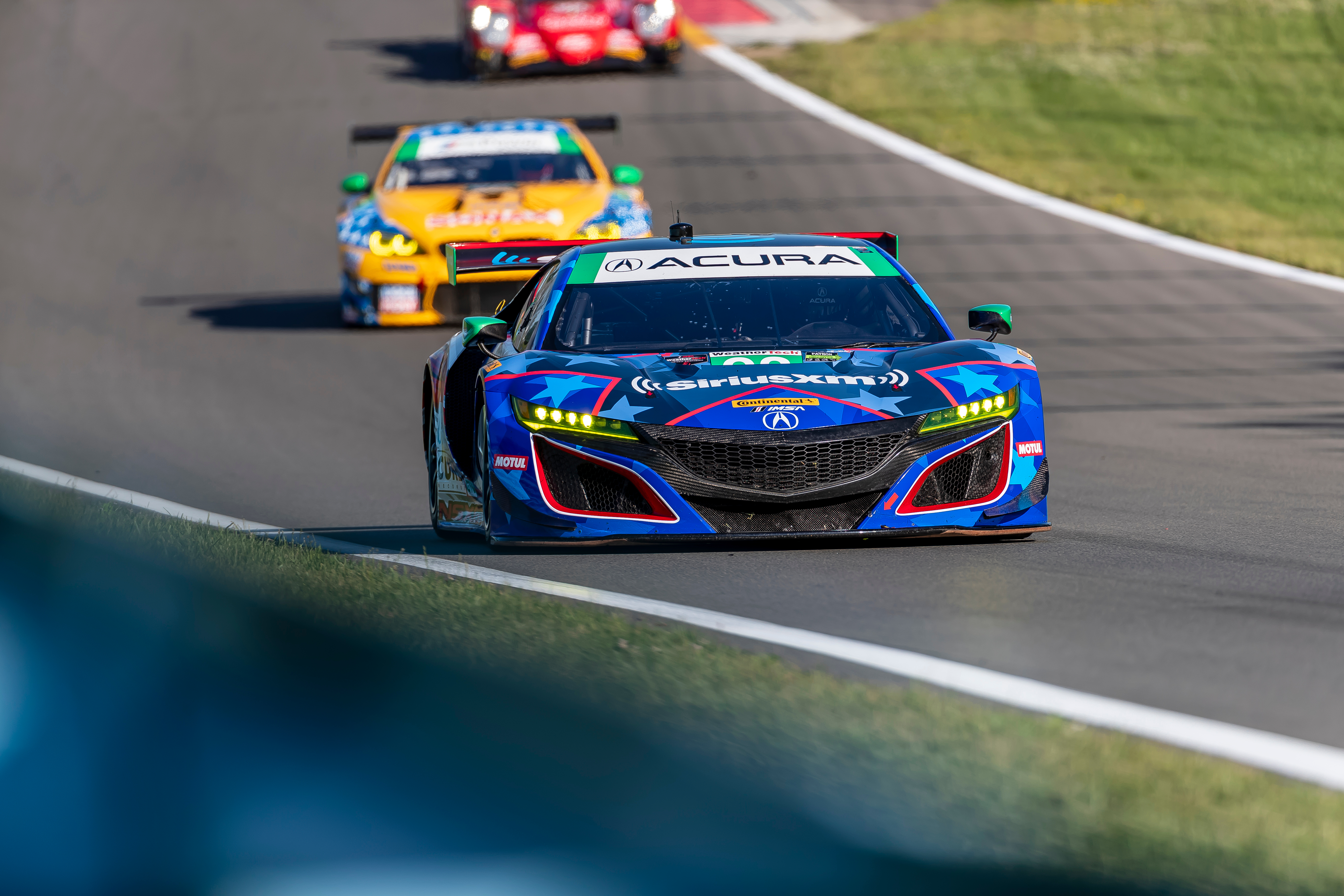 Garcia is keen to get back to CTMP because of the challenge it presents. In Toronto since Tuesday, he was doing some sightseeing and enjoying the city before heading back to work at CTMP Friday.

“Mosport as a circuit (many still call CTMP by its old name) is tough because it’s very intense,” said the driver who’s been partnering Magnussen since 2014 and the pairing has never been worse than fourth in races here since. “From turn one to the back straight feels like a single corner. When you combine that with different classes (racing at the same time), it gets very stressful. So far, it’s been clean races for us here . . . we just have to be smart and not get into trouble and just be up front and try to drive our car as best as possible. The goal this weekend is to win, for sure.”

“We showed it,” he said. “We won three championships and many important races together – Le Mans, Daytona 24. I always saw him as a reference and he’s been a great part of this experience I’ve had.  When I first joined him as his teammate, the first year I was with him I learned a lot from him so that’s part of this relationship in the car.

“I think we are at the point where we push each other to be more and more competitive and that’s not just us, there’s Oliver (Gavin) and Tommy (Milner) and that’s Corvette Racing’s success – consistency and the right driver pairings and to learn the best way to work together and that’s what makes running in the team so smooth.”

Spanish native Garcia and a childhood friend, Fernando Alonso, raced in go-karts together and remain close. For a while, it looked like he would follow his countryman and pal into the upper echelons of single-seat racing but when he lost his Red Bull sponsorship, he had to make a choice: continue trying to make it to F1 or find another career in motorsports

“Motorsport is not only Formula One,” he said. “I’m very glad that I made my choice (to race sports cars) because I really enjoyed the last 15 years of my career. Everybody back in the day would love to be in Formula One and be World Champion but I also thought about this sport as my job so I am very glad I made the right choice and now it’s almost 20 years that I’ve been a professional in my favourite sport and so I am very grateful.

“I’m very proud that my path went to Corvette Racing and I have been with them 10 going on 11 years and I hope there’s way more to come.”

I asked the racer if he had any unfinished business like his friend Alonso, who seems driven to win the Indianapolis 500 to go along with his world championships and his victory in the 24 Hours of Le Mans.

“No,” he said, “Nothing like that. But there are a few things, like the Petit Le Mans (at Road Atlanta in October). I don’t know what’s going on in that race; I’ve never won it. That upsets me,  thinking I never won that one. I think what I want to achieve, knowing that I will continue with Corvette Racing, is to win at every single race track that we go to.

“I think there’s still a few that I didn’t win yet so I would like to be able to say I won every single event we went to. That would be my goal.”

In addition to the glamour-puss WeatherTech championship race, the IMSA Michelin Pilot Challenge, the IMSA Prototype Challenge and the Porsche GT3 Cup Challenge Canada by Yokohama will be in action. Practice for all races will be held Friday, with practice, qualifying and racing taking place Saturday and Sunday.

Good tickets are still available and they can be purchased at the gate. For more information, go to canadiantiremotorsportpark.com