I grew up in Oshawa and always wanted a Corvette after three of us went to the Orillia Folk Festival in our friend Max Darlington’s 1957 or ‘58 Corvette to see the new singing stars Ian and Sylvia Tyson. It was about 1959 and I was 16.

Max, who was older, was a close relative of the trainer of famed Canadian race horse Northern Dancer.

Following high school in Oshawa, I studied dentistry at U of T, graduating in 1968, and moved to St. Catharines — a great sports town, where I was involved in hockey with the OHA and the Ontario Rugby Football Union (ORFU). 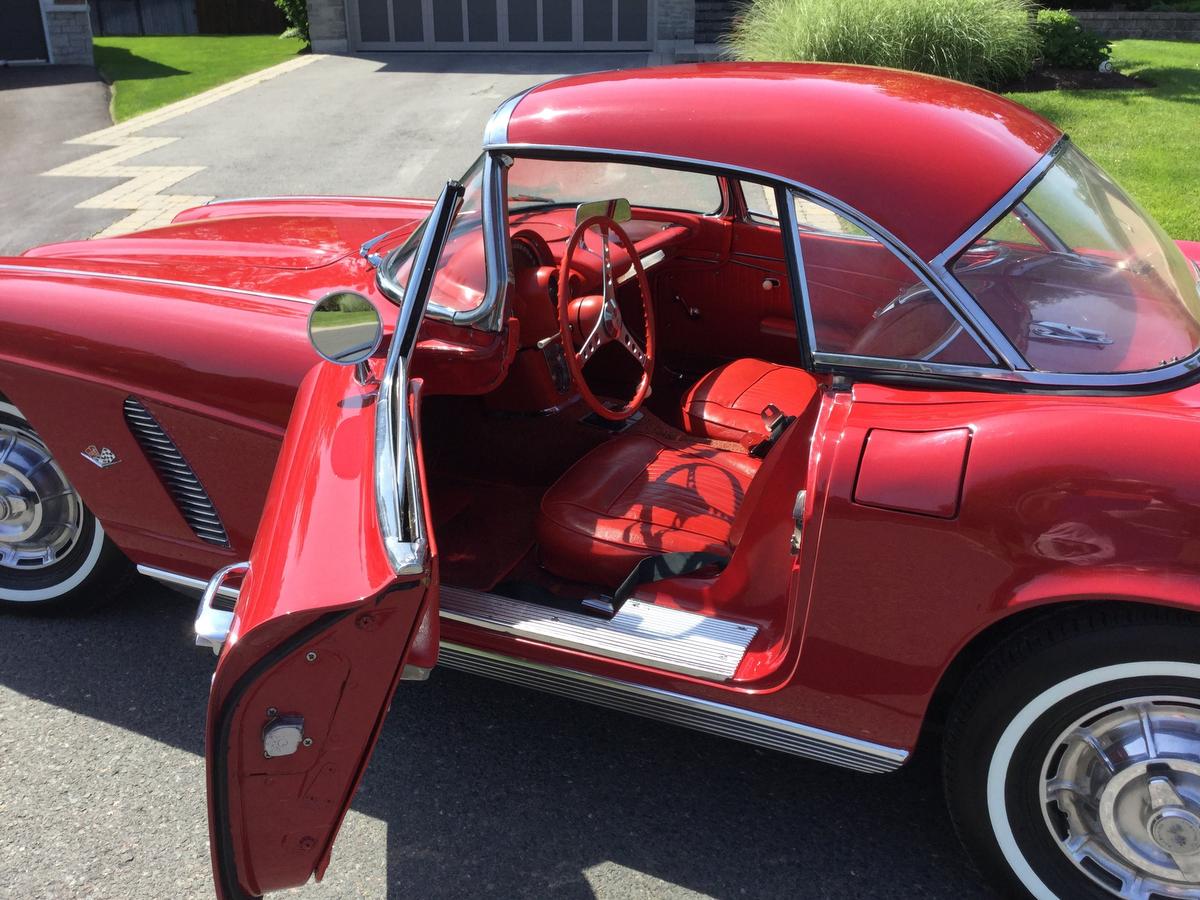 The interior of this 1962 Corvette is period correct from the seats to the dashboard. Its original Wonder Bar radio has been replaced by a modern stereo system that fits perfectly. The upholstery from Texas was installed by a shop in St. Catharines.

In 1973 I bought my red 1962 Corvette convertible from my mechanic for $4,000. The last year of the first-generation C1 series (1953-62), it had the soft top, mag wheels, and although it was missing some parts and accessories, this was my chance.

A year later I got a phone call from a friend who said there was an ad in the paper for a ‘62 hardtop for sale in Niagara-on-the-Lake. I drove there in the Corvette and met the owner, who was floored. “This was my car!” he exclaimed, realizing he was a previous owner.

We established there were other owners between us and that the car originally came from Sudbury. He said he’d kept the hard top because the buyer couldn’t afford his price, so he started to strip the car down until the price was right. He had the original wheels, the ‘62 wheel covers, the front chrome bar, the glove box and some other parts.

That was the start of my mission to make the car as original as possible. I found out about the National Corvette Restorers Society (NCRS), joined the club, and I’m still a member today. It’s the best option for repairs, original and new parts, and everything you want to know about Corvettes. I got the society’s 1953 to 1972 specification guide, judging and technical manuals.

I found out that most of my car was original, with correct matching numbers. The VIN number dates the assembly of my Corvette to July 18, 1962, and the engine, transmission, rear end, and many other parts are original with correct matching numbers. It even had the original Wonder Bar radio. I bought a stereo at Corvettes at Carlisle, the largest Corvette event in the world, held in Carlisle, PA., that perfectly fits the dash, and I keep the Wonder Bar radio and speaker in a box. 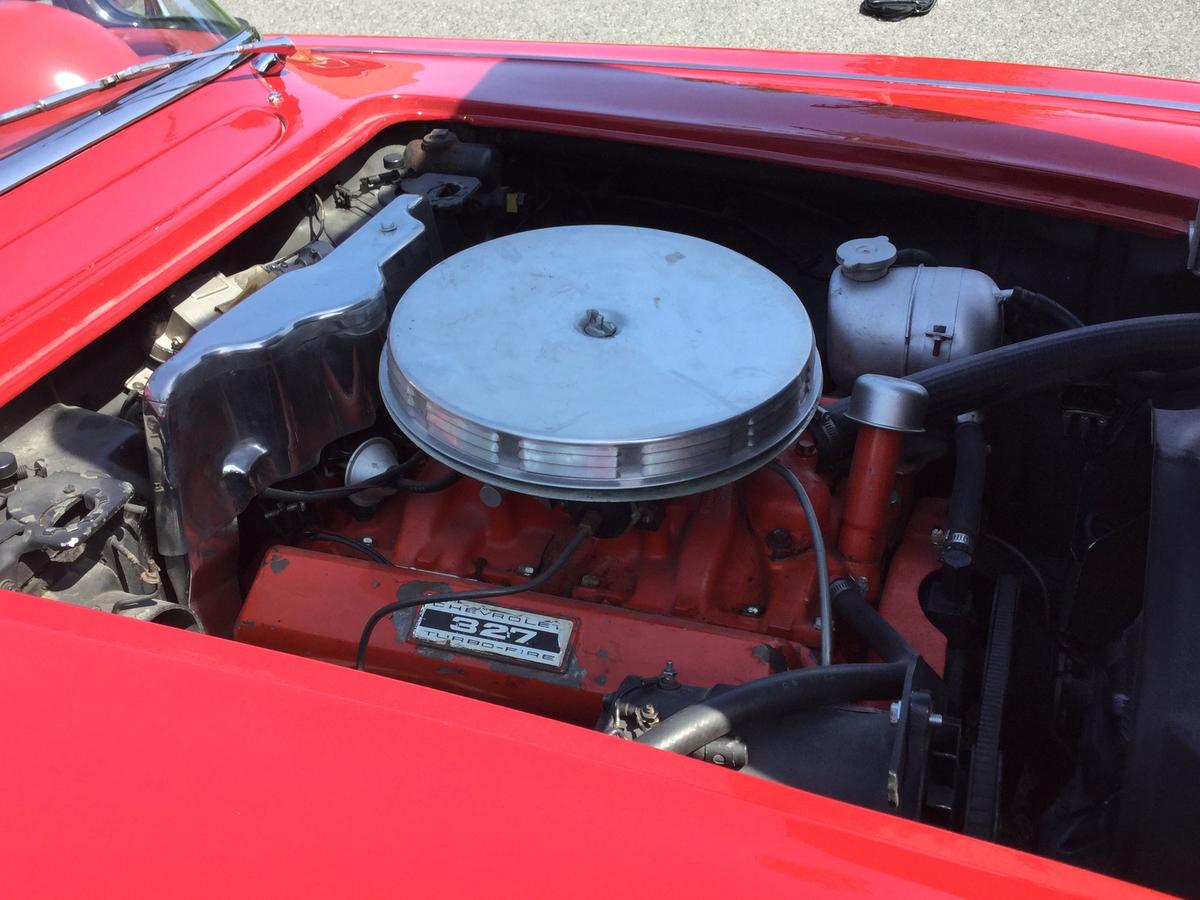 A new four-barrel carburetor brought the car back to its original specifications, with engine chrome, stickers, valve covers and many other missing parts making it all period correct.

I bought a correct interior from Texas and had it installed in St. Catharines by a local upholstering shop. A stainless steel ‘62 exhaust system was installed and a new set of radial white wall tires were put on. I had the car repainted in acrylic enamel using the correct ‘62 paint codes, which won’t crack like the original paint. During that process, I discovered the original colour was white, as someone missed painting the inside of the small box between the seats and the hard top’s interior, as the original red cars had red tops. The visors are also white, not red. The soft top is white, but that originally came in optional colours.

A new four-barrel carburetor made it true to original specifications, with engine chrome, stickers, valve covers and many other missing parts making it all period correct. I made a list of all missing original parts and I’m still working on this bit by bit. Unfortunately I lost my original shifter, seatbelts and buckles, as they were thrown out by mistake, but I have since added a new reproduction of the shifter and correct buckles. I can’t find the red belts, as there were four versions that year, along with the buckles, and mine are the last version.

I had the car judged in 2003 by the NCRS’s Ontario chapter, which classed it as a Level 3 car with an 81.5 point score. With recent upgrades I’m sure it is likely a Level 2 (85 points) today. To be top ranked you need a score of at least 94 and my only regret was to not have done body-off restoration, as getting to Level 1, or other rewards like Bloomington Gold certification, is impossible without it.

We joined the Niagara Corvette Club, a very socially active club in St. Catharines, and although we no longer live in Niagara, we still maintain our membership. 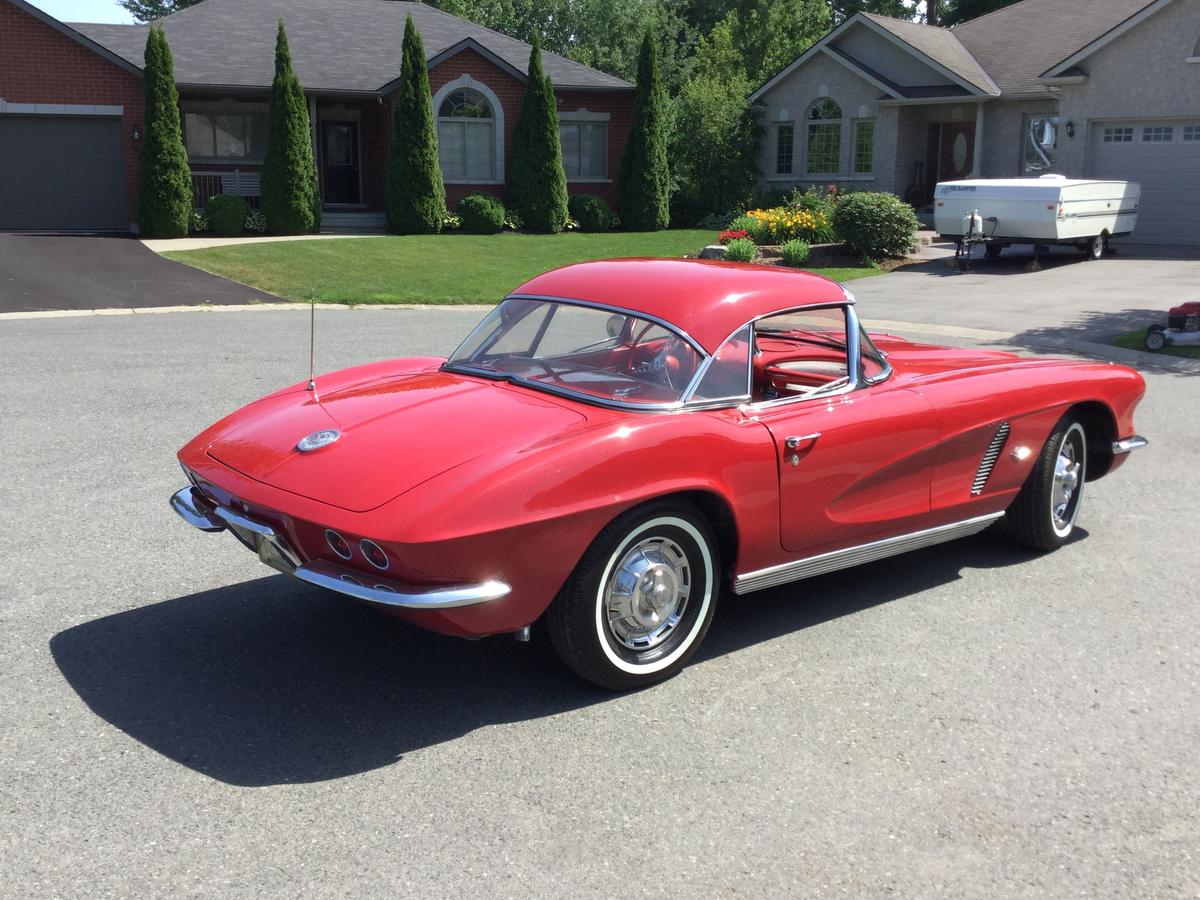 The Corvette was repainted in acrylic enamel using the correct ’62 paint codes, and the restoration included a stainless steel ’62 exhaust system and a new set of radial white wall tires.

Show us your Candy: Got a cool custom or vintage car?

Send us high-res, horizontal pictures (at least 1 MB) of you (and your family) with your beauty, and tell us your story in 300 to 600 words, giving us all the details of how you found your car and why you love it so much. We like photos — the more the better — of the interior, trim, engine, wheels, and emblems. Email wheels@thestar.ca and type ‘Eye Candy’ in the subject line. Google ‘Wheels.ca Eye Candy’ to see classic cars featured in the past.