In 1964, I was able to purchase a new MG Midget (with wire wheels) for $1,900. Since that time, I’ve been fascinated by convertibles, old and new

In 1964, I was able to purchase a new MG Midget (with wire wheels) for $1,900. Since that time, I’ve been fascinated by convertibles, old and new. I have always tried to rent one when visiting other cities and have always wanted one approximating my own vintage.

All kinds of antique convertibles captured my interest. Jaguar XK120s and XK150s were too expensive, said my bank manager. I have spent time at the Morgan Motor Company factory in Malvern, England, however the Plus 8 did not meet Canadian emission control standards.

There were pitfalls in my search for an antique convertible: I visited a famous car museum in United States and paid for a rather derelict Austin-Healey. Because the painter of the car was more interested in alcohol than painting, I could see that this car was not going to be finished. I was able to recoup my investment and start another search.

For 20 years, our double garage has received everything that will not fit in the house: a veritable junk yard, one might say. My wife refused to enter the garage in principle over all these years and would never go in to find something that I had lost. 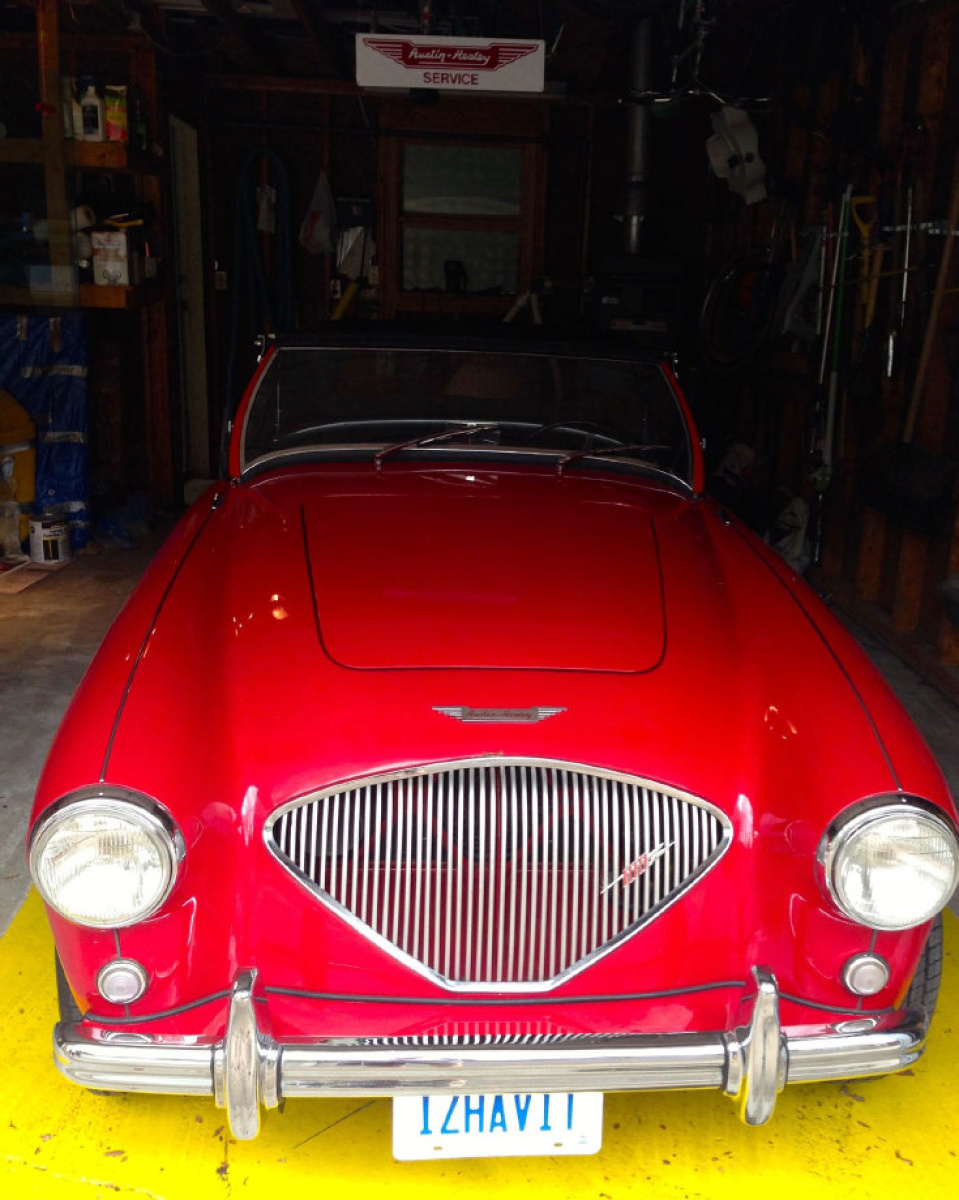 It took years of searching, but Dr. Michael Easterbrook finally found the car of his dreams, an eye-catching 1955 Austin-Healey 100 convertible.

With a car eventually coming, I actually cleaned up the garage and painted a safe yellow “landing strip” for the potential Austin-Healey, the yellow to show any unlikely leakage of oil.

Three years ago, I joined the Ontario Austin-Healey Club and was told to visit a restorer who had redone hundreds of old Austin-Healeys.

This I did and subsequently became the proud owner of a 1955 Austin-Healey, flaming red and black, with wire wheels. I installed new seatbelts and a new personalized licence (IZHAVIT), and I was ready to go.

In Denmark, a connoisseur of fine automobiles told me that if I was buying such a car as a chick magnet, I would be sorely disappointed, as it would not work in this capacity. I assured him that was not my interest, not even in the slightest.

I need not have worried …

Every old gent (my age and above) in the city who has ever had an Austin-Healey has approached me and asked what year it is, then they would recount, ad nauseam, details of their car; the number of carbs, seats, and engine specs, their joys with leaky oil, overheating, difficulty finding parts, and a good mechanic, and so on.

For the record, my car overheats after 10 blocks. I was not allowed to park in my building at work until I figured out some way to stop the oil leaking, one drop at a time.

While driving alone over two years, I’ve noticed one young lady smiled at the car! Last week, a gentleman spent five minutes walking around the car. I thought he was admiring it, until he stopped and said, “Nice hat.”

One of my charming 90-year-old patients, Rita Neal, came in this summer, and as she was the last appointment of the day, I asked her if I could drive her home in the car. She was delighted and wore the leather helmet and goggles all the way home, many kilometres via Bay and Yonge Streets.

Yes, the car does leak oil and constantly overheats, but a ride in a ’55 Austin-Healey is one way to meditate. 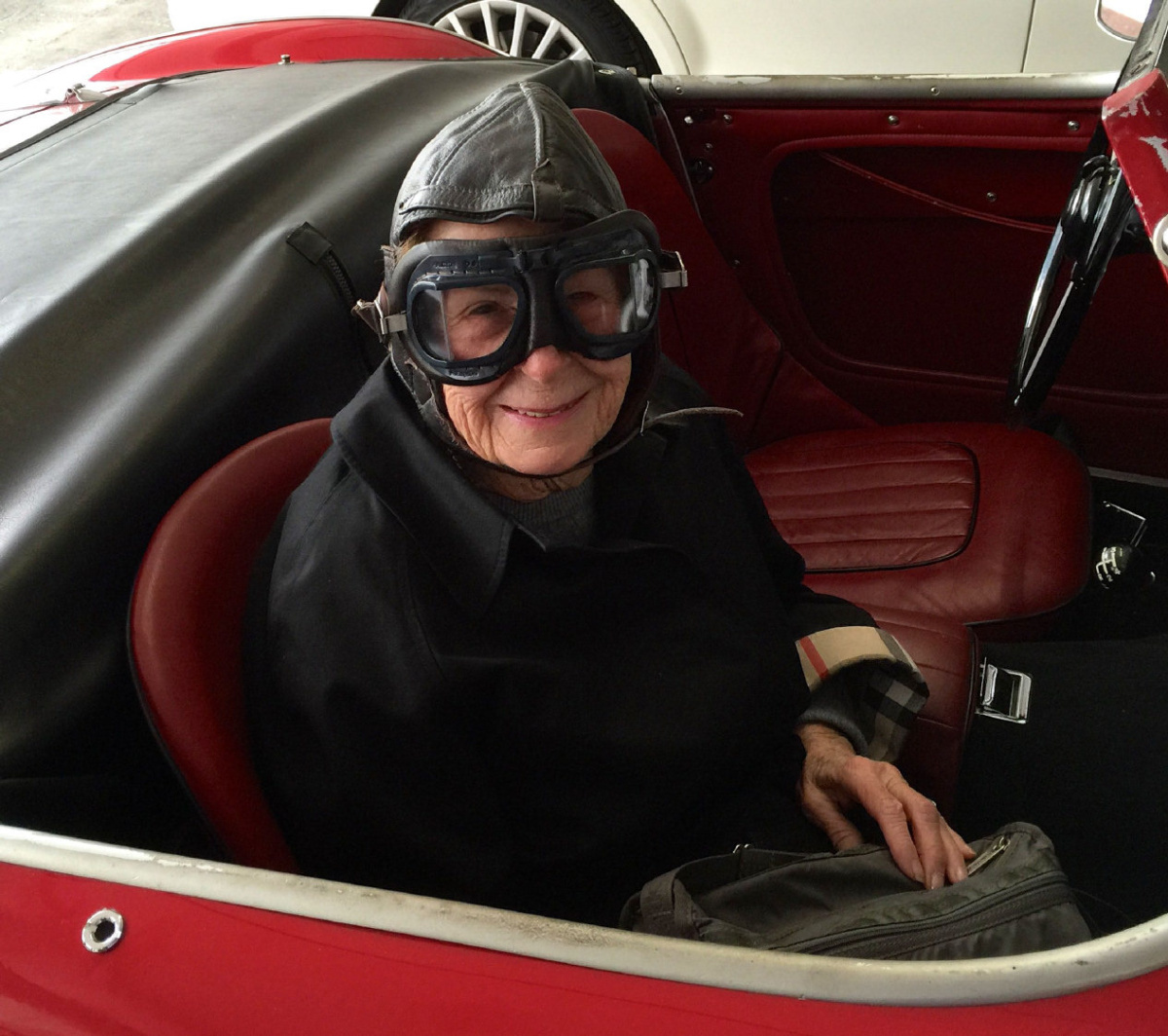 Ready to roll. Rita Neal, one of Dr. Michael Easterbrook’s patients, was thrilled to be chauffeured to her North Toronto home in her physician’s flashy red 1955 Austin-Healey roadster.

Show us your candy: Got a cool custom or vintage car? Send us high-res pictures (at least 1 MB) of you and your family with your beauty, and your story. We like photos — the more the better — of the interior, trim, wheels, emblems. Email wheels@thestar.ca and type ‘Eye Candy’ in the subject line. Google ‘Wheels.ca Eye Candy’’ to see classic cars featured in the past.