Exploding Sunroofs: What can cause it, and who's to blame?

Car owners who complain to their dealership about their shattered sunroof are almost always told that it was a flying stone that broke the glass and are advised to make an insurance claim.

Join the Conversation (12)
It’s been described as a shotgun blast out of a clear blue sky that has startled and traumatized drivers and passengers alike.

“We were driving down the highway when our sunroof exploded. All of the glass shattered and flew everywhere, some of it hitting another vehicle. The entire panoramic sunroof is missing,” wrote the owner of a Hyundai Veloster online.

In a sign of these angst-ridden times, some motorists have called police, mistakenly believing that an unseen gunman had taken aim at traffic.

In reality, tempered glass – the “safety glass” that has long been adopted by the automotive industry – is prone to spontaneously shattering for a variety of reasons that are not commonly understood.

Thanks to the Internet and social media, reports of auto glass exploding without warning have seemingly multiplied in recent years. The phenomenon is also attributed to the growing popularity of sunroofs and panoramic glass roofs. Unfortunately, more glass in our cars means more opportunities for unprovoked failures.

Tempered glass has been breaking spontaneously for many years, not only in cars, but also in myriad other applications such as shower stalls, oven doors and massive condominium windows.

For motorists, in particular, the question is: who pays for the breakage?

Car owners who complain to their dealership about their shattered sunroof are almost always told that it was a flying stone that broke the glass and are advised to make an insurance claim. But, increasingly, the explanation doesn’t wash with consumers.

“I’m frustrated that I have to pay $250 deductible that I know was a manufacturing defect after I researched and found hundreds with the same experience,” remarked a Toyota Venza owner on the ToyotaNation website.

Bob Beranek, editor of U.S.-based Auto Glass Journal, has stated it’s “practically impossible” for a stone to impact a horizontal pane with any force, while witnesses have reported that their sunroof glass “blew straight [upward] like a Coke exploding” – a telltale sign of tempered glass failing due to internal stress.

A YouTube video from a dash cam captures a spontaneous sunroof explosion in an Infiniti SUV:

Some owners have reported sunroofs shattering overnight while their vehicle was locked in a garage—seemingly disproving the flying stone argument.

Armed with a bounty of online evidence chronicled by hundreds of motorists, consumers are pushing back and calling on government agencies to implement safety recalls.

The nature of tempered glass


Tempered glass is created by rapidly cooling the hot glass emerging from the furnace during production, which results in the surface temperature falling much quicker than the core of the glass.

“However, if something does compromise the surface compression layer, it releases the large amount of energy stored in the central tensile stress zone,” he says. With baked-in compressive stress in excess of 15,000 psi (pounds per square inch), tempered glass disintegrates into relatively harmless pebbles when it breaks.

All automotive glass is tempered. What makes the windshield different is that it is laminated; that is, it uses two layers of glass with a clear plastic laminate sandwiched between them. When a windshield shatters, the pieces adhere to the laminate, rather than blow into the cabin. 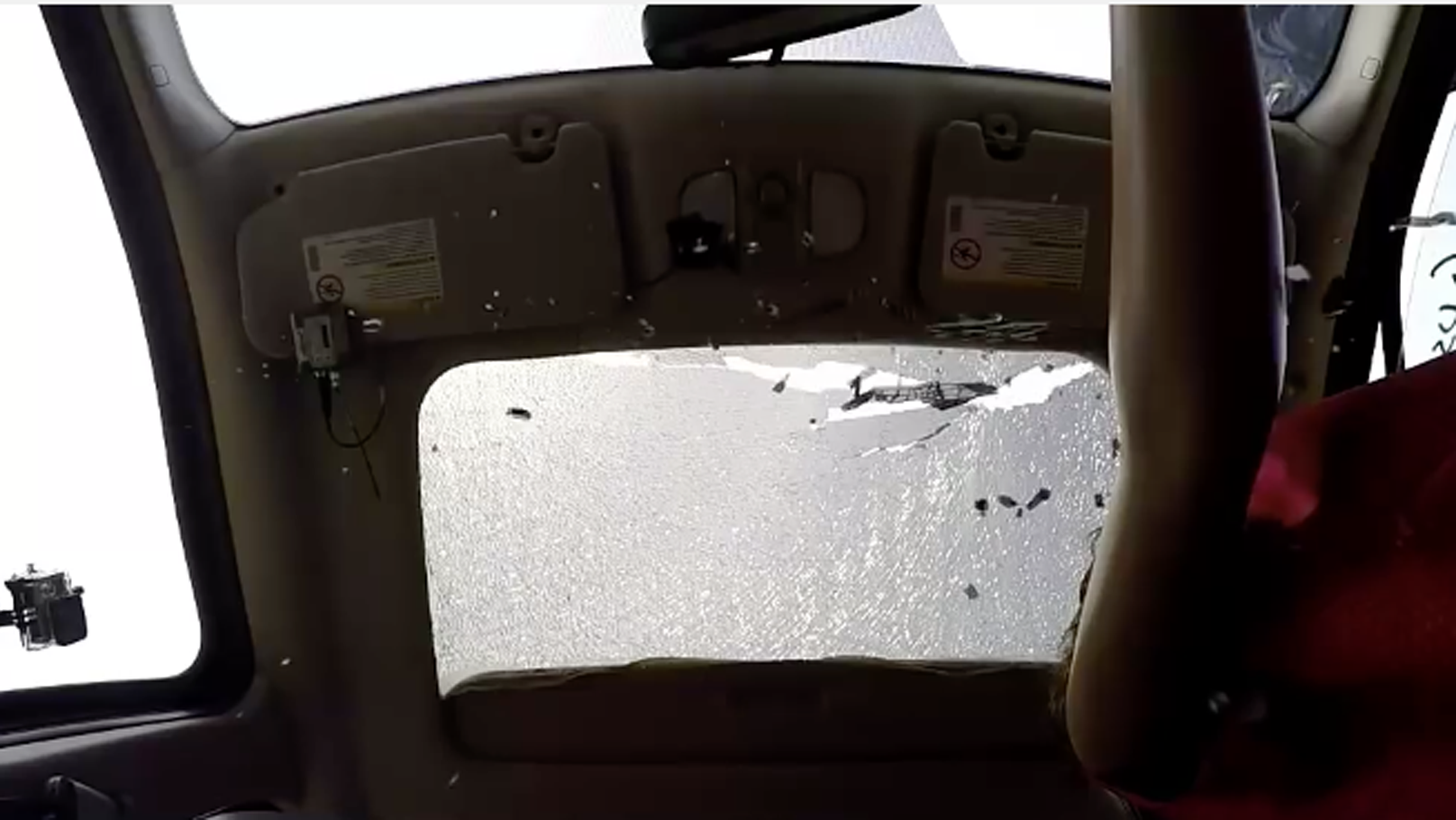 
Experts talk about a “memory” that tempered glass can accumulate. Minor damage during installation, such as nicked or chipped edges, can later develop into larger breaks normally radiating from the defect.

Binding of the glass in its frame, causing new stresses as the glass expands and contracts due to thermal changes or deflects due to wind, can result in enough force to trigger the tempered glass panel to release its stored energy, resulting in a spontaneous explosion.

Davies points to poor manufacturing quality, such as forced cooling times and uneven distribution of air over the hot glass surface, as well as poor installation, with glass bonded or installed incorrectly, bad-fitting glass forced into apertures, or points of mechanical contact creating stress on the glass panel.

In addition, contaminants in the glass are a well-documented manufacturing defect.

“The usual suspect for contamination-linked failure is nickel sulphide, which comes from the original glass manufacture. The crystal can change shape and size over time due to factors like temperature,” he says. The changing nickel sulphide deposit embedded in the glass can stress the panel and ultimately trigger a spontaneous explosion.

“Contamination could be a valid explanation if lots of the same parts (same vehicle make, model and glass part) are seen to fail,” Davies suggests.

It’s important to note that other types of vehicle glass can also shatter suddenly, such as the rear window on SUV models. Because the rear hatch is often scraped to remove ice or slammed down after loading, tiny cracks that form around the edge of the glass may later result in a sudden explosion—the impact memory that glass experts talk about.

What makes the sunroof incidents different is that roof glass is seldom touched by anyone and they’re largely immune to flying stones. And with growing online evidence pointing to sunroofs shattering unprovoked, consumers are demanding that manufacturers own up to defective glass.

You may like: There are two sides to every story


Frustrated drivers who were told by dealers to put their broken sunroof claim through insurance are pushing back by getting industry regulators involved. In one example spurred by owners, the U.S. National Highway Traffic Safety Administration (NHTSA) is investigating reports of spontaneous sunroof breakage in 2011-14 Kia Sorento models.

NHTSA has reviewed similar complaints by owners of other vehicles, and has sent information requests to four additional manufacturers: Ford, Volkswagen, Hyundai and Nissan. In reality, no automaker appears immune to the phenomenon.

Transport Canada has received a significant number of sunroof explosion complaints, and started two active investigations, one prompted by a Calgary realtor whose sunroof spontaneously shattered while driving his Buick. The dealer blamed an unseen rock, but when pressed, General Motors contributed $500 towards the $1,000 repair.

Faced with growing online evidence – and the gathering storm of class action lawsuits – manufacturers have begun to grudgingly admit that their auto glass may be defective. Some have begun honouring warranty claims and quietly recalling selected models.

Volkswagen Group is recalling some 2013-14 Audi A8 and S8 luxury sedans because the glass in the standard sunroof may shatter. Hyundai issued a recall on certain 2012 model-year Velosters for spontaneously exploding panoramic sunroofs. Jim Trainor, Hyundai’s U.S. public relations manager, suggested “defects with the glass” may be a factor.

For its part, the Insurance Bureau of Canada (IBC) has not noted any increase in the number of insurance claims involving broken auto glass, and hasn’t opened a dialogue with manufacturers regarding spontaneously exploding glass.

“IBC has not been made aware of increases in claims resulting from shattered glass and, therefore, we have not engaged the auto sector on this,” says IBC spokesperson Andrew McGrath.

Consumer advocate George Iny, president of the Automobile Protection Association, says insurance companies have not been rejecting roof glass claims, even though they probably could challenge some claims or impose a premium surcharge on vehicles with glass roofs.

“You can be certain that the day the insurance industry imposes a surcharge or excludes coverage for the glass roof of certain vehicles, the carmakers will design a better roof.”

Remedies and the future of auto glass