The last thing motorists need to worry about on today’s busy highways is having their sunroof spontaneously explode, sending glass fragments raining down on them while driving 100 km/h.

While relatively rare, it can happen when so-called “safety glass” shatters, seemingly unprovoked, for a variety of reasons that are not commonly understood.

Tempered glass, which has been used by the automotive industry for decades, can blow apart without warning when a confluence of factors conspire to release the compressive energy baked into every piece. Experts point to manufacturing defects and installation faults as the leading causes.

Equally disturbing is the response vehicle owners get when they bring their broken sunroof to the dealership.

“The explosion occurred 99.99% (certain) from impact from a rock,” posted the owner of a 2014 Nissan Murano, recounting the explanation given by the local dealer and Nissan Canada. “They both were able to come to the same conclusion without even looking at the damage or inspecting the sunroof.”

“My wife had two explosions in a 2006 X3. One when parked in 30C (weather); one when driving in 20C. Both exploded up(wards). Photos to BMW Canada were ignored till I threatened a lawsuit,” outlines a post by an Alberta man. “BMW dealer gave me half the cost on labour; BMW Canada gave half of $4,000 cost.”

Wrangling compensation from dealers and manufacturers for sunroof and glass repairs caused by what is essentially a manufacturing defect can be an uphill battle. 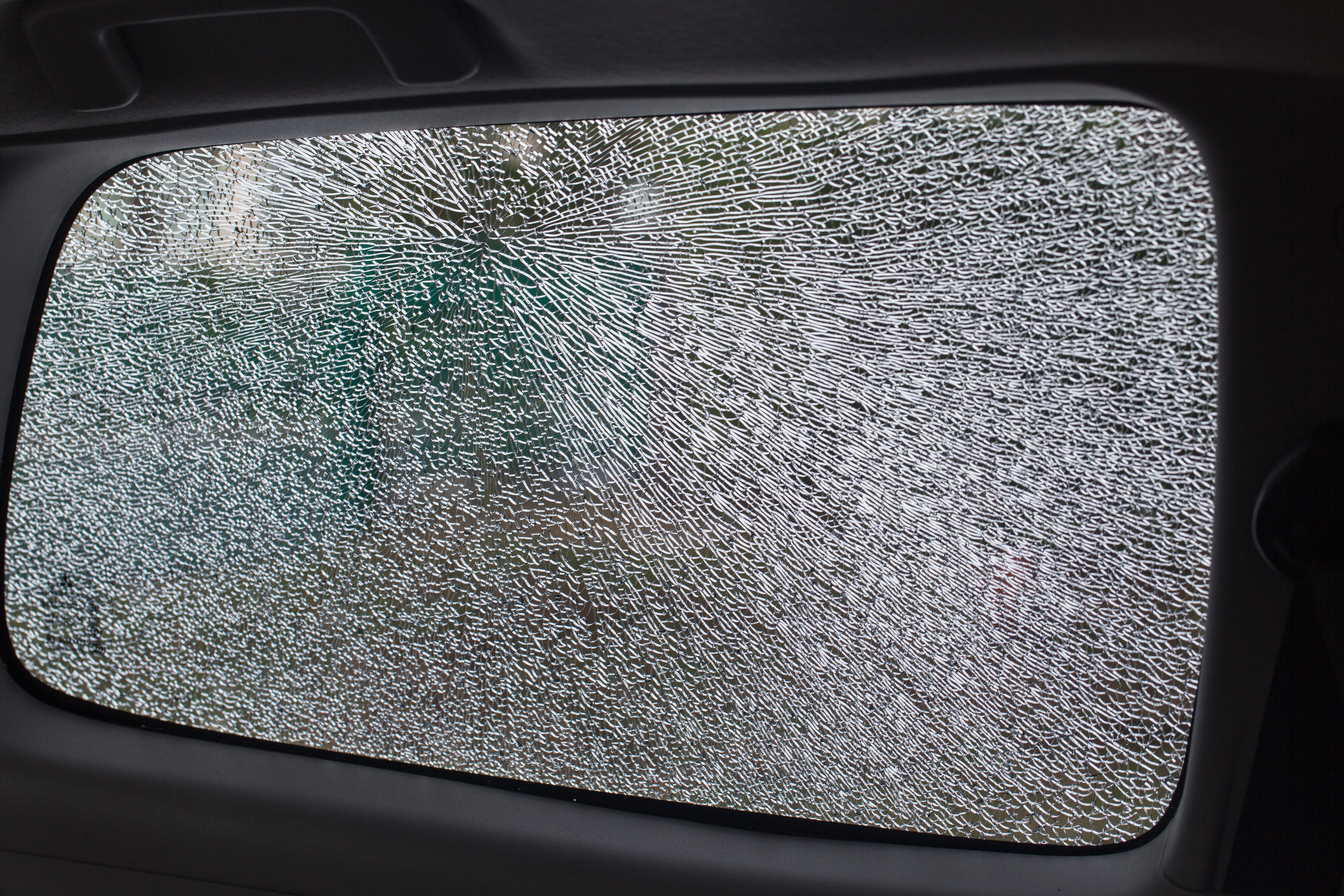 “The automakers rely on exclusion for ‘external causes’ in their warranties. It’s one of the four or five exclusions common to all automaker warranties, the others being abuse, negligence, and normal wear and tear,” points out consumer advocate George Iny, president of the Automobile Protection Association.

“In theory, the burden of proof when you reject a warranty claim lies with the warranting party, but automakers are sometimes too quick to reject without doing any serious root cause analysis to exclude a defect in the part.”

“The advent of the Internet has made getting evidence much easier to find, but it’s a tough job for a consumer who wants their vehicle back on the road quickly,” says Iny. “Most will take the easier way out and make an insurance claim.”

But policyholders are usually required to pay a deductible of hundreds of dollars, and then fret over the prospect of a premium hike in subsequent years. Many motorists cringe at the notion of invoking their policy coverage at all.

So, what to do when your sunroof spontaneously shatters?

“Duct-tape the remnants and go to your dealership to show them the evidence,” says Mohamed Bouchama, executive director of CarHelpCanada.com. “It helps if you get an independent auto-glass repair shop to write an assessment of the cause, and bring that with you.” 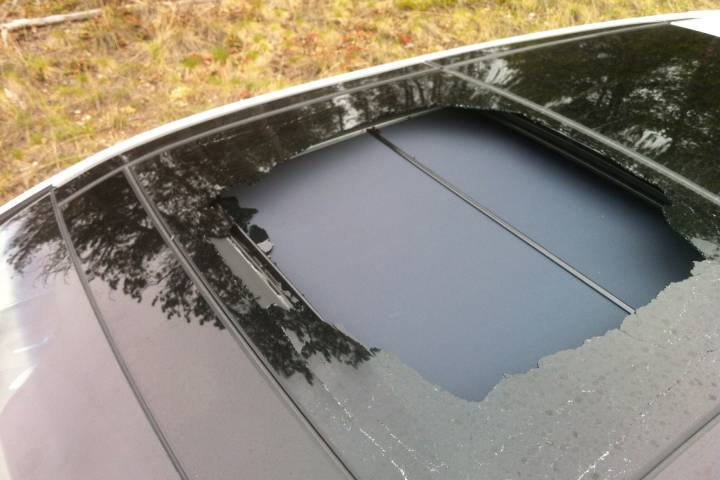 If the dealer insists the cause is a stone impact – despite having no physical evidence – Bouchama advises calling the automobile manufacturer directly, especially if it’s a newer model and still under warranty.

“If you push and threaten to go to small claims court, you will get at least 50 per cent of the repair cost covered,” he says. Some dealers and manufacturers have paid the entire replacement cost, especially when presented with evidence that it’s a known issue with the same make and model.

“Quite a few people have experienced it. In 2008 I was dealing with owners of Ford Escapes with shattered sunroofs. The dealers were unanimous: ‘It’s not our fault – go to your insurance,’” Bouchama remembers. With considerable tenacity, he was able to get some clients’ sunroof repair bills reimbursed, but it takes time.

An oft-overlooked remedy is the Canadian Motor Vehicle Arbitration Plan (CAMVAP), Canada’s alternative to U.S. lemon laws. It’s a free resolution process that settles disputes between car owners and manufacturers over alleged defects in a vehicle’s assembly or implementation of the new-vehicle warranty.

CAMVAP  general manager Stephen Moody says about one-quarter of the claims handled by CAMVAP are for exterior issues, some of which involve auto glass failures.

“In most instances involving glass breaks, the consumer will be claiming for reimbursement of repairs that have been previously paid for. The consumer must prove that the glass break occurred; the manufacturer’s counter argument will be that external damage (road hazard, flying stones, etc.) caused the glass to break.”

Moody advises consumers to take clear photos of the shattered sunroof or window and any related paint damage, note the weather conditions at the time of the breakage, make detailed notes of discussions with the dealer and manufacturer, and keep all invoices and proof of payment.

Vehicle owners are eligible for a hearing as long as their car is no more than five model years old and has travelled less than 160,000 kilometres. However, the decision is binding (there are no appeals) and consumers have to relinquish the option of pursuing civil action in court.

Car owners can help their cause by bringing an expert witness to the hearing, such as an auto glass technician who can identify faulty parts or outline breakages observed in similar makes and models. Information about CAMVAP arbitration can be found at www.camvap.ca or by calling 1-800-207-0685.

Transport Canada investigates safety-related defects in vehicles, tires and child car seats, and can issue recalls. Presently, the Hyundai Santa Fe Sport is listed on its active investigations database for panoramic sunroof glass panel breakage. Consumers can report any model for potential investigation at 1-800-333-0510 or by using the online public complaint form.

In the U.S., consumer complaints over spontaneous sunroof explosions have prompted a number of investigations by the National Highway Traffic Safety Administration. At the same time, lawyers are encouraging consumers to contact them to add to growing class-action lawsuits. Kia, Hyundai, Ford and Nissan have already been named in court actions, and more automakers are expected to be drawn into the fray.

Beyond consumer compensation, what can the industry do to address spontaneous breakages?

Dr. Chris Davies, head of technical research and innovation at Belron, which owns Speedy Glass in Canada, says increasingly popular panoramic sunroof panels can be laminated; that is, made with a layer of clear polyvinyl butyral sandwiched inside to keep the glass pieces together should the panel shatter.

In addition, there are new kinds of glass in the works. Corning is working with French company Saint-Gobain to find automotive applications for Gorilla Glass, the almost indestructible glass that graces millions of smartphones.

“The new Ford GT will be the first windscreen application of this technology. The main reason for using Gorilla Glass here is to minimize weight, which is important for a supercar like the GT,” says Davies.

“Other traditional glass suppliers, like Pilkington, are also looking at lightweight glazing using conventional laminate materials, though they see market penetration as being less than 5 per cent in 2020,” he says.

“With Advanced Driver Assistance System (ADAS) fitment growing and vehicle manufacturers moving to autonomy, there will be a growth in glass parts that will have attachments for cameras, lidar and radar modules.”

New trends in auto glass will depend on how vehicle design changes over time, says Davies, but tempered glass is likely to be around for many years to come.

And so will the spontaneous, startling breakages.

Also Read: Exploding Sunroofs: What can cause it, and who’s to blame?