The most expensive supercars and hypercars money can buy are found gracing the verdant lawns at Van Dusen Gardens.

Vancouver has become synonymous with supercars and hypercars over the past 8 years, thanks in part to one event; the Luxury & Supercar Weekend, held at Van Dusen Gardens. The LSW has come a long way from its humble beginnings in 2009. Today the most expensive supercars and hypercars money can buy are found gracing the verdant lawns at Van Dusen Gardens.

Held in front of the Edgewater Casino in the Plaza of Nations in downtown Vancouver, it was a relatively low-key event and quite an intimate affair as there were only 20 or 30 supercars on display. The cars themselves were all privately owned and the owners were on hand to chat and rev their supercar engines.

I have a distinct memory of a Ferrari setting off the car alarms in the parking lot. One rather flamboyant owner was Zahir Rana who brought a number of his cars including his yellow Ferrari Enzo, a Ferrari F40 and a couple of Lamborghini’s.  I got to interview Zahir inside his yellow Ferrari Enzo (one of 399 ever produced). The highlight for me was actually getting to start the engine.

A harbinger of things to come from LSW was the presence of the fastest and most expensive supercar in the world in 2009 – the Bugatti Veyron. I remember taking my camera crew behind the velvet ropes that cordoned the car off from the public where I could not resist touching this mythical car. Testimony to the growth of supercars in Vancouver, several Bugatti Veyron’s have lived here over the past few years.

In 2011 the LSW stepped up its game and embedded itself at the prestigious Van Dusen Gardens. Set amidst the rolling green slopes of the gardens LSW had found a perfect location to grow and increase the variety of vehicles on display.  The man who must be credited with much of the success and progress of the LSW is Craig Stowe, the founder and president of Luxury & Supercar Weekend and the Concours d’Elegance.

Stowe is also responsible for organizing the annual Hublot Diamond Rally ,which sees one hundred plus supercars drive up the scenic Sea to Sky highway to the ski resort in Whistler. Each year the quality of the cars increases. Participants now include hypercars such as the McLaren P1 and Ferrari’s LaFerrari. I was fortunate to participate in 2014 in an Aston Martin Vanquish. In 2017 famed Lamborghini test driver Valentino Balboni was a guest driver on the rally.

The LSW is a multi-faceted event. Billed as Canada’s premier Luxury Lifestyle event, its hosts fashion shows, exhibitions of jewelry and watches, and now a live supercar auction.

The vehicles at the show fall into several categories, heritage car collections, car clubs, and major manufacturers (who have increased their presence significantly over the past 8 years). Lamborghini, Ferrari, Jaguar Land Rover, Acura, Rolls Royce, BMW, and McLaren now take center stage displaying the latest examples of their wares. This year the crown jewel was the 4.5 million-dollar Pagani Huayra roadster.

Pagani is a small boutique supercar maker from San Cesario sul Panaro near Modena Italy. Pagani is part of the supercar triangle in the region with Lamborghini at Sant Agata, and Ferrari nearby in Maranello.

The McLaren dealership in Vancouver is an authorized Pagani dealer and has brought examples of the Pagani Huayra to the LSW for the past few years. Last year I had the privilege of driving the $2.5 million-dollar Pagani Huayra Tempesta. This year the LSW had, fresh from Pebble beach in Monterey California, the latest Pagani automotive masterpiece the Pagani Huayra roadster.

Accompanying the roadster was Horciao Pagani’s son Christopher Pagani.  Much to my delight I found out three Huayra roadsters will be coming to Canada, and one will call Vancouver home. 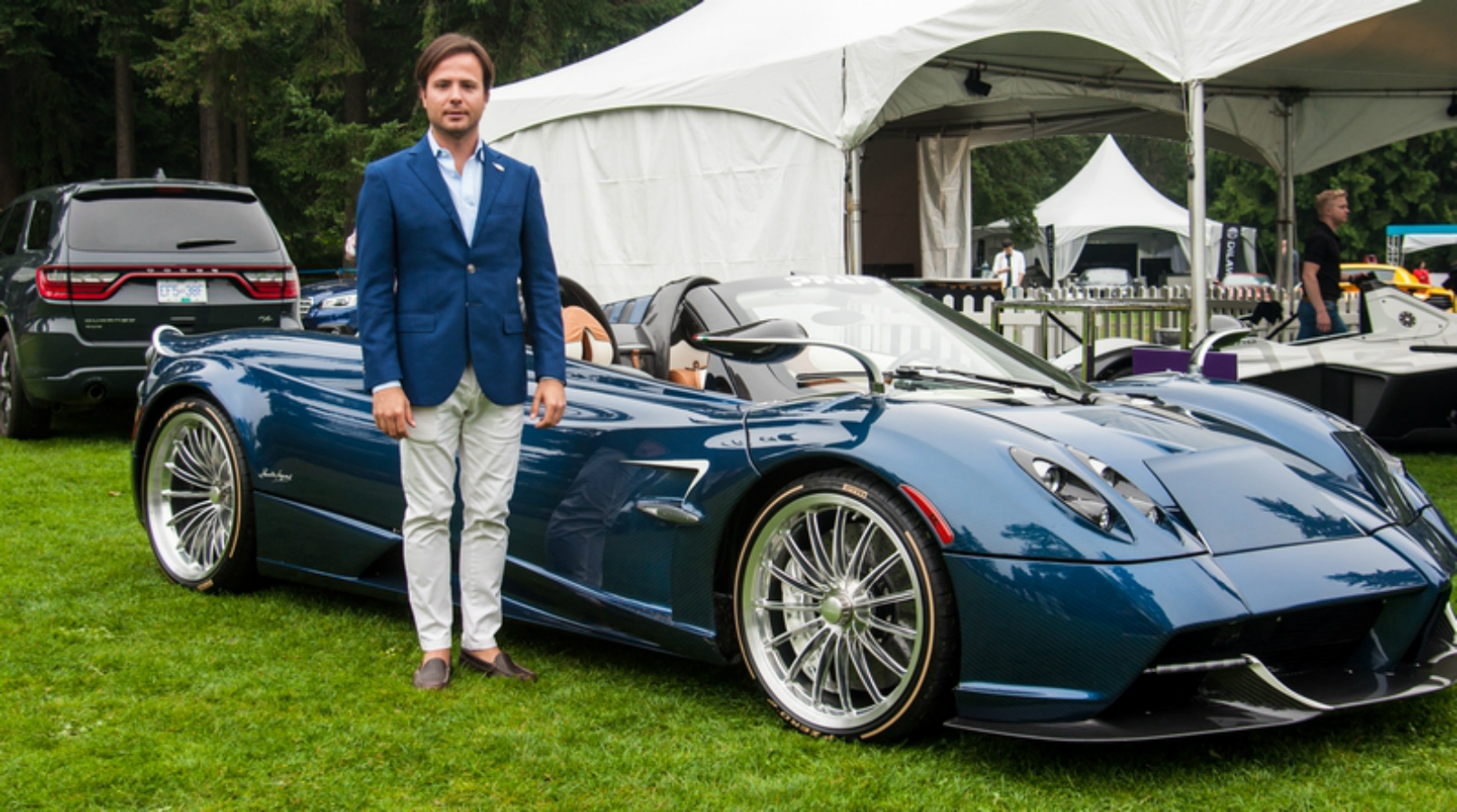 The Friday event at LSW was a media only event which gives us the opportunity to preview the cars that will be on display for the weekend. The benefits of a small group make it easier to talk with the manufacturers and car owners in a much more relaxed fashion. In my case it allowed to me to chat with Christopher Pagani, who is a very approachable man. 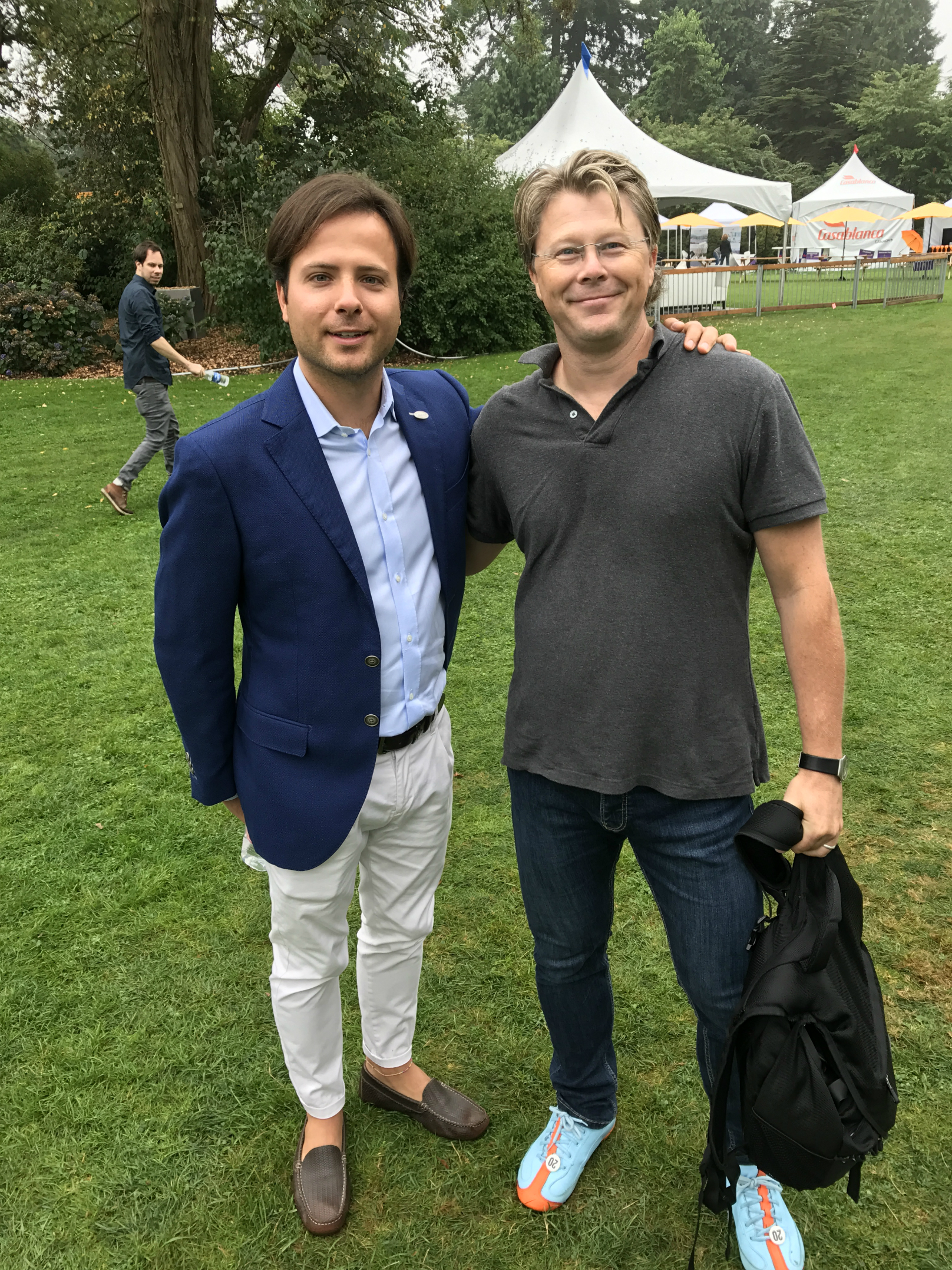 One of my favorite Pagani models is the Zonda Tricolore of which only three were built as a tribute to the Italian aerobatic display team the Frecce Tricolore.  Christopher was present when they filmed the video for the car and saw the aerobatic team performing.  He mentioned that the blue color of the Triclolore is the same color used on the Pagani Huayra roadster.  We also discussed his father’s impressive car collection, whose most recent acquisition was a Ferrari F12 tdf.  Sadly, my time with him was all too brief but I look forward to talking to him again in the future and see what direction Pagani head in once Christopher and his brother Leonardo are running the company. 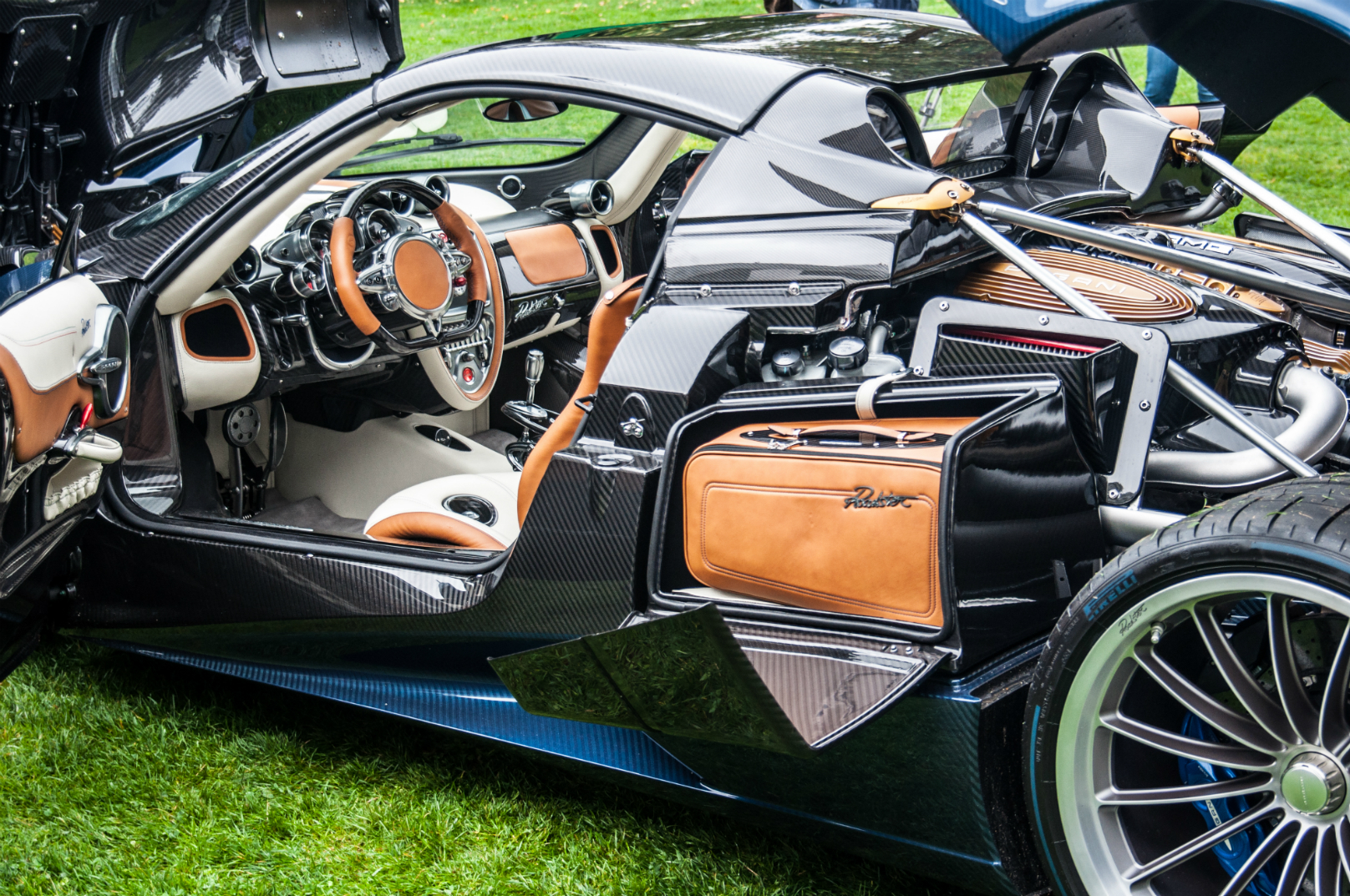 Some of the car highlights of the LSW aside from the Pagani, was the new $750,000-dollar Rolls Royce Phantom, a behemoth of a vehicle befitting a royal head of state, a dictator or a billionaire.  On the complete opposite end of the spectrum was the British single seater race car the BAC Mono, which is road legal in the UK but not currently in Canada.

The carbon fiber monocoque and racing suspension point directly to its racing credentials. At $340,000 it is a rather expensive plaything, but one which I have no doubt would leave you breathless. I spoke to a chap who had driven one at Silverstone in England. I asked him how fast he went down hanger straight.  He was unable to tell me as he was sacred witless and forgot to look at the speedometer. 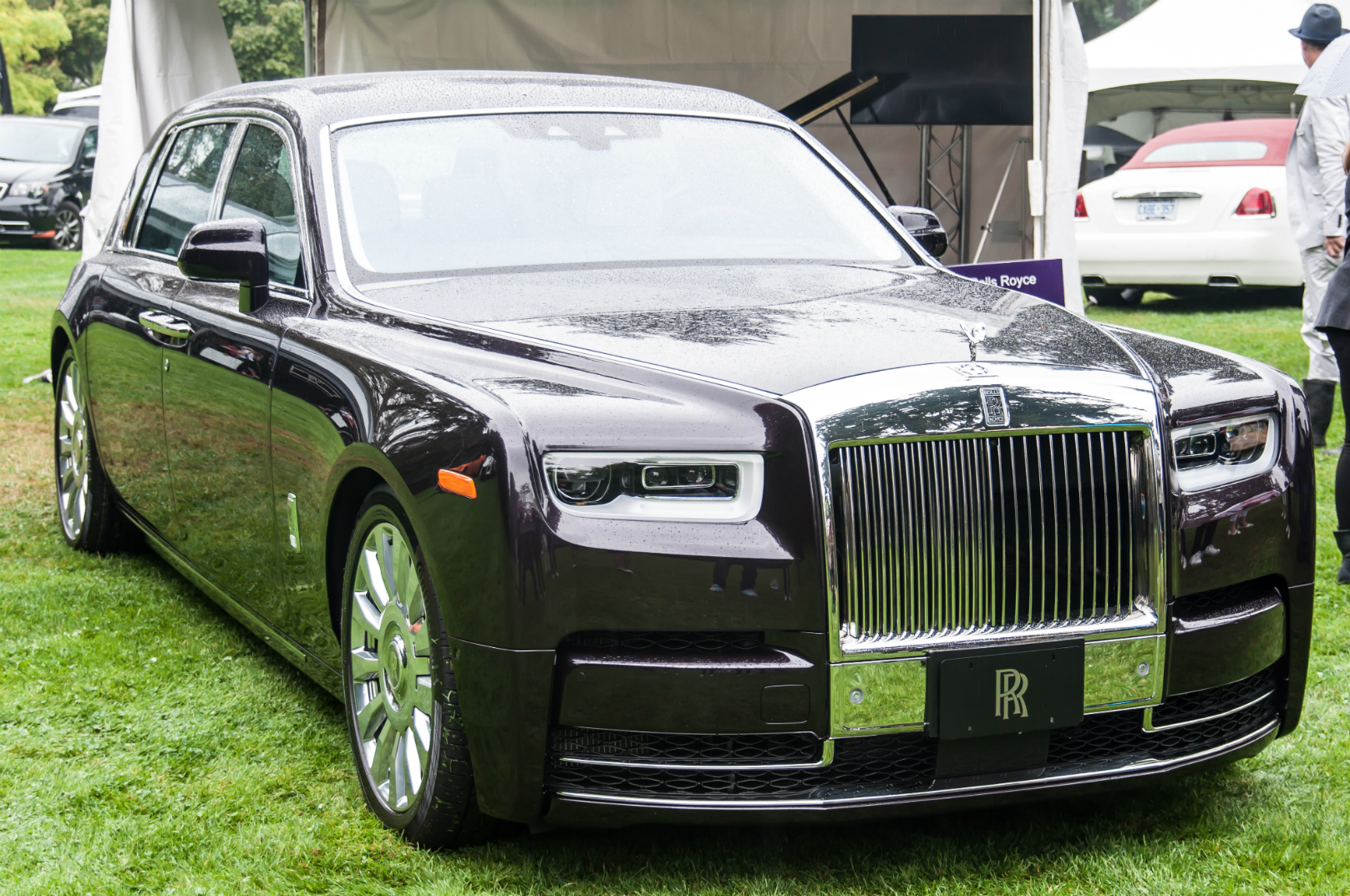 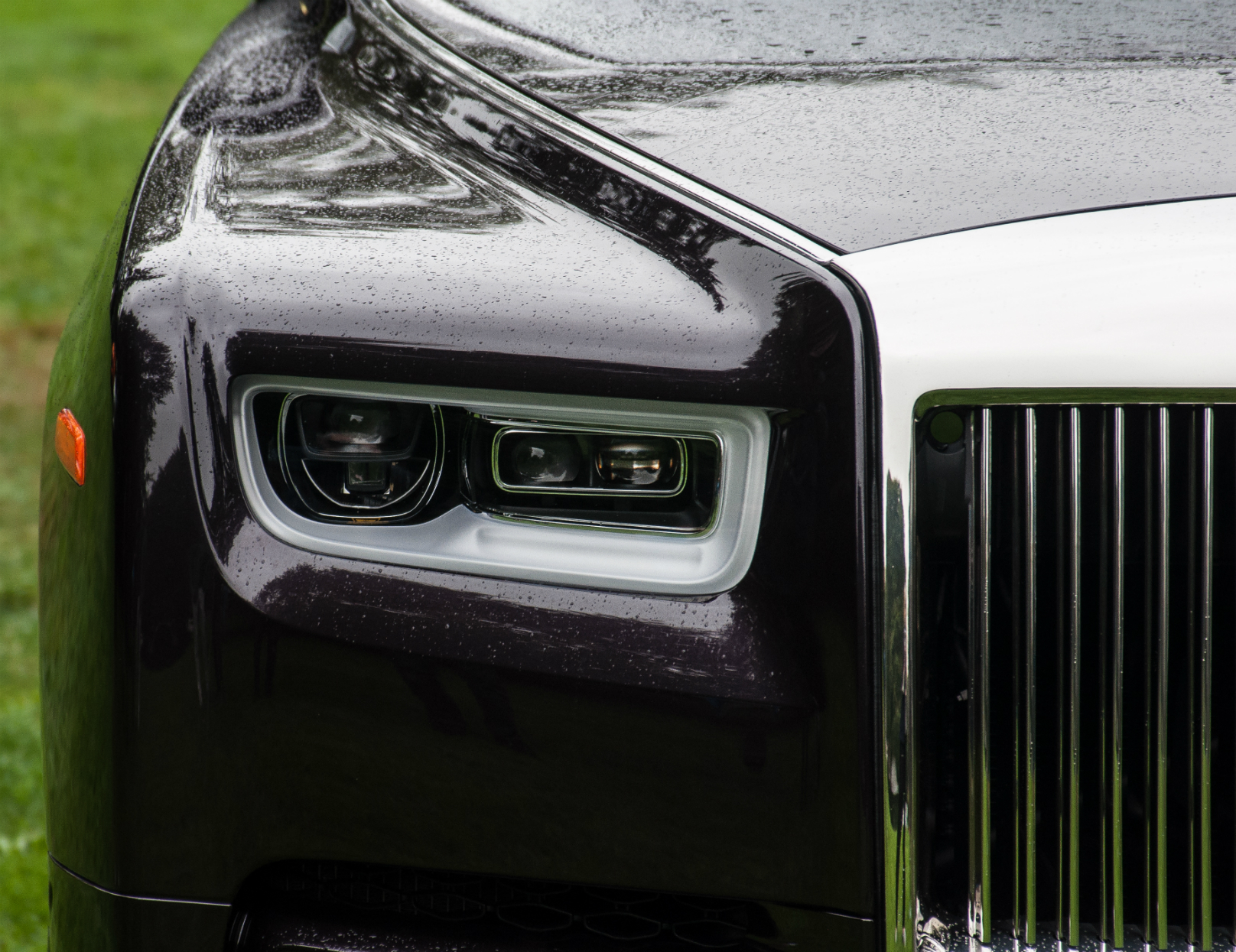 McLaren displayed the new 720S and just for fun featured a privately owned P1 hypercar in volcano red.  Lamborghini brought the Huracan Performante (the car that broke the lap record at the Nurburgring) and the new Aventador S. I am a fan of manual gearboxes, which are a dying breed in most supercar manufacturer lineups. Porsche is the exception, so I was delighted to see a privately-owned Porsche 911R on display. 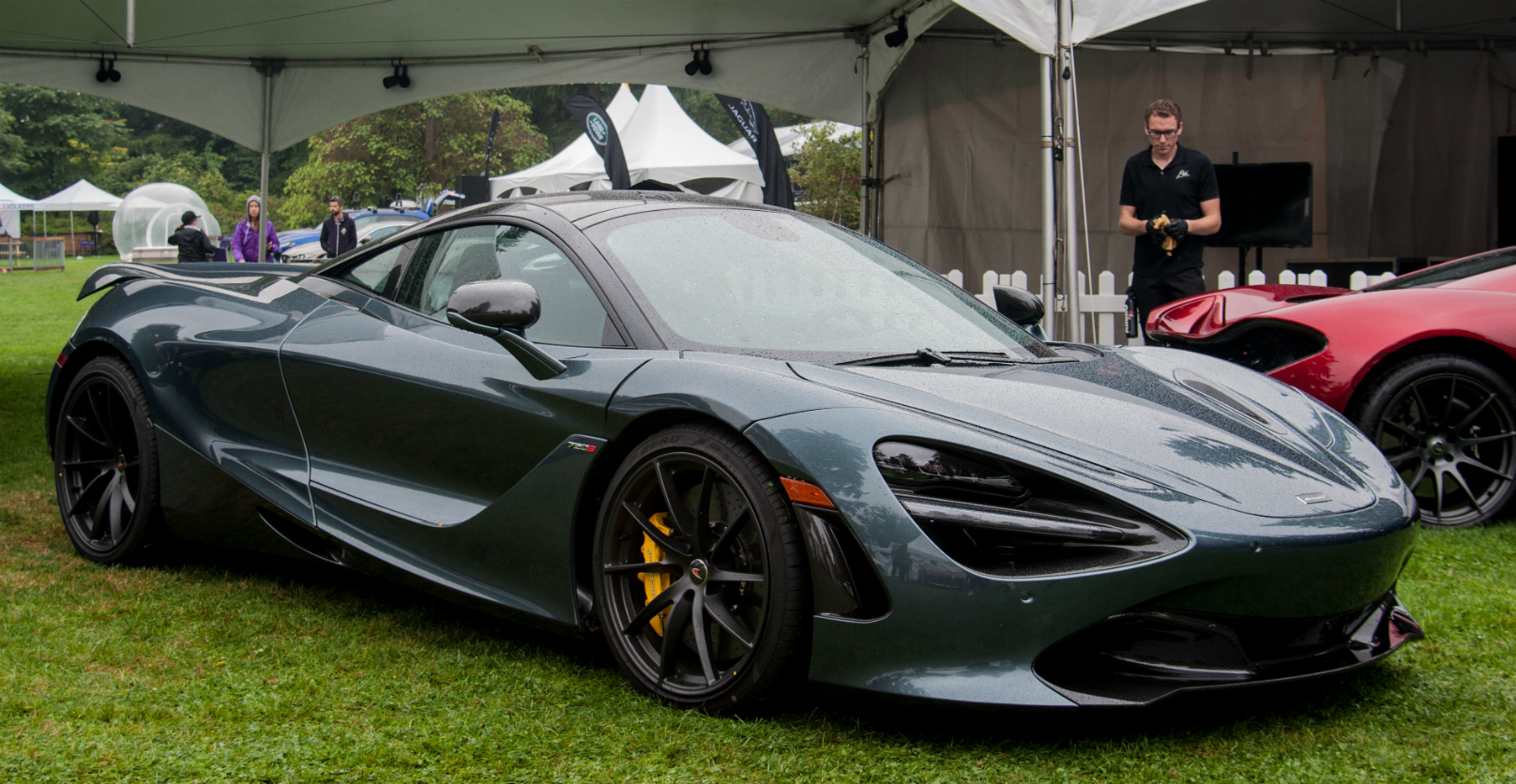 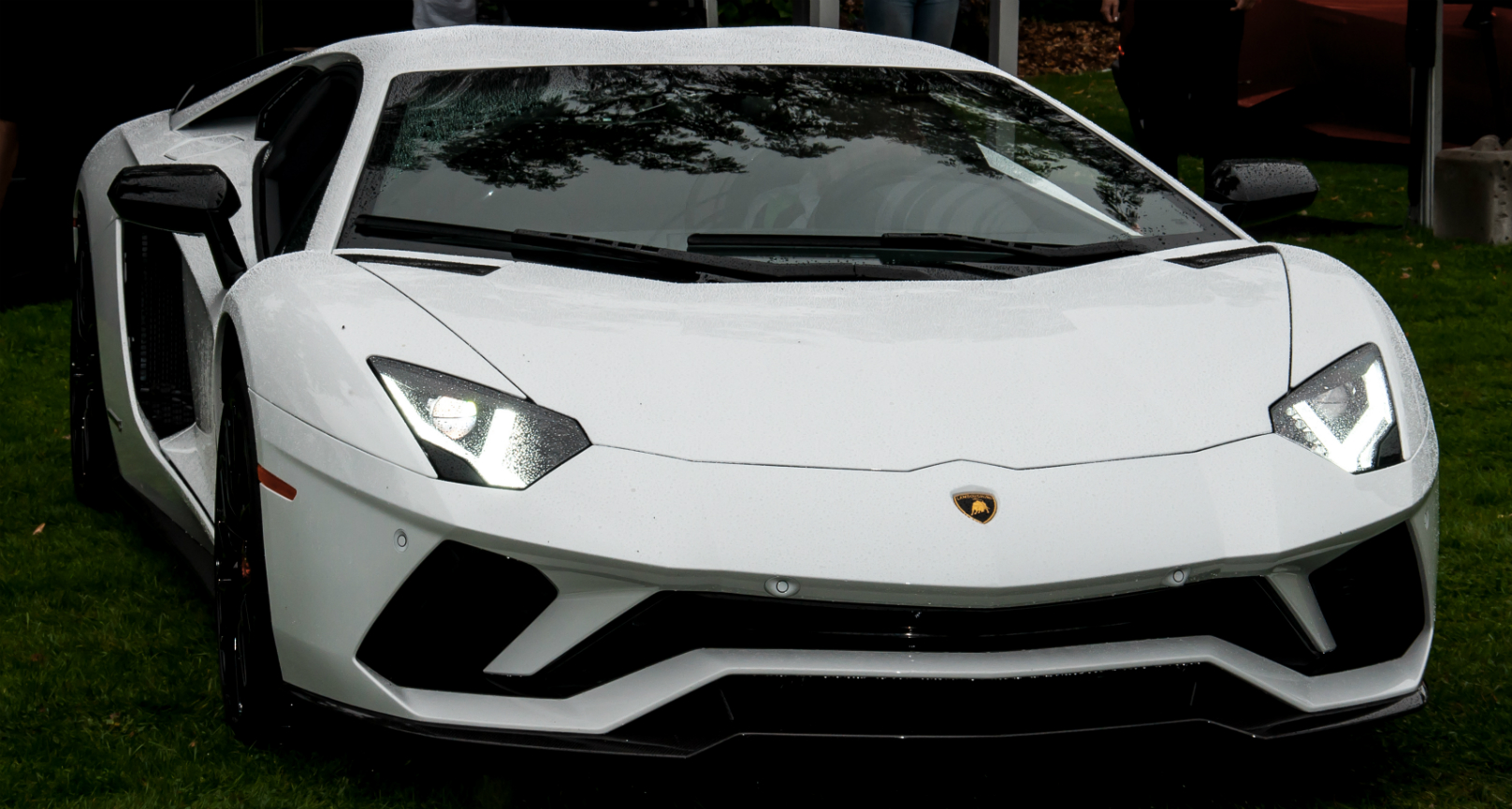 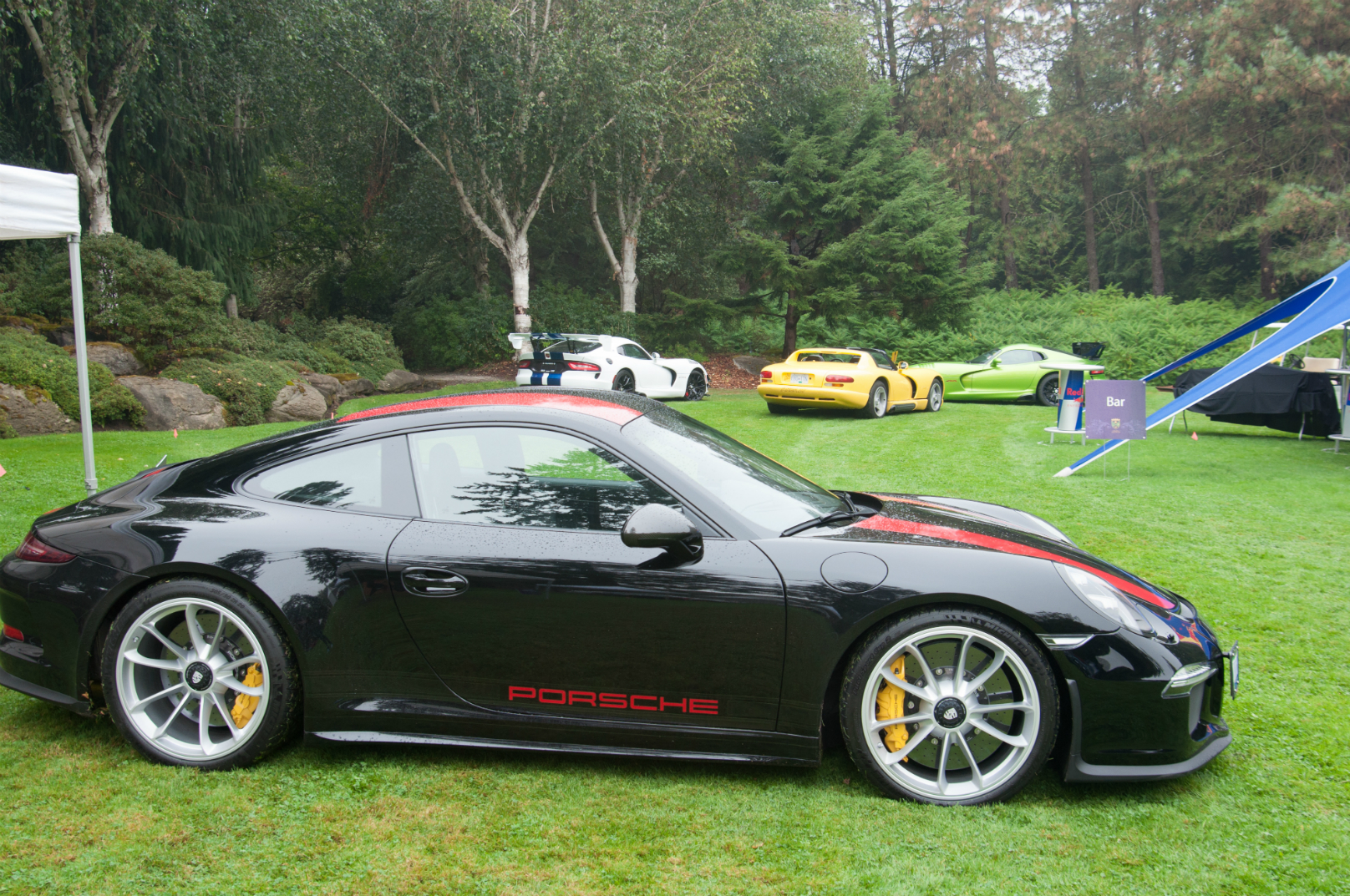 Acura was present with three NSX’s, my favorite was painted a vibrant red (spot a theme here?). If you are going to buy a supercar you may as well shout about with a vibrant paintjob. 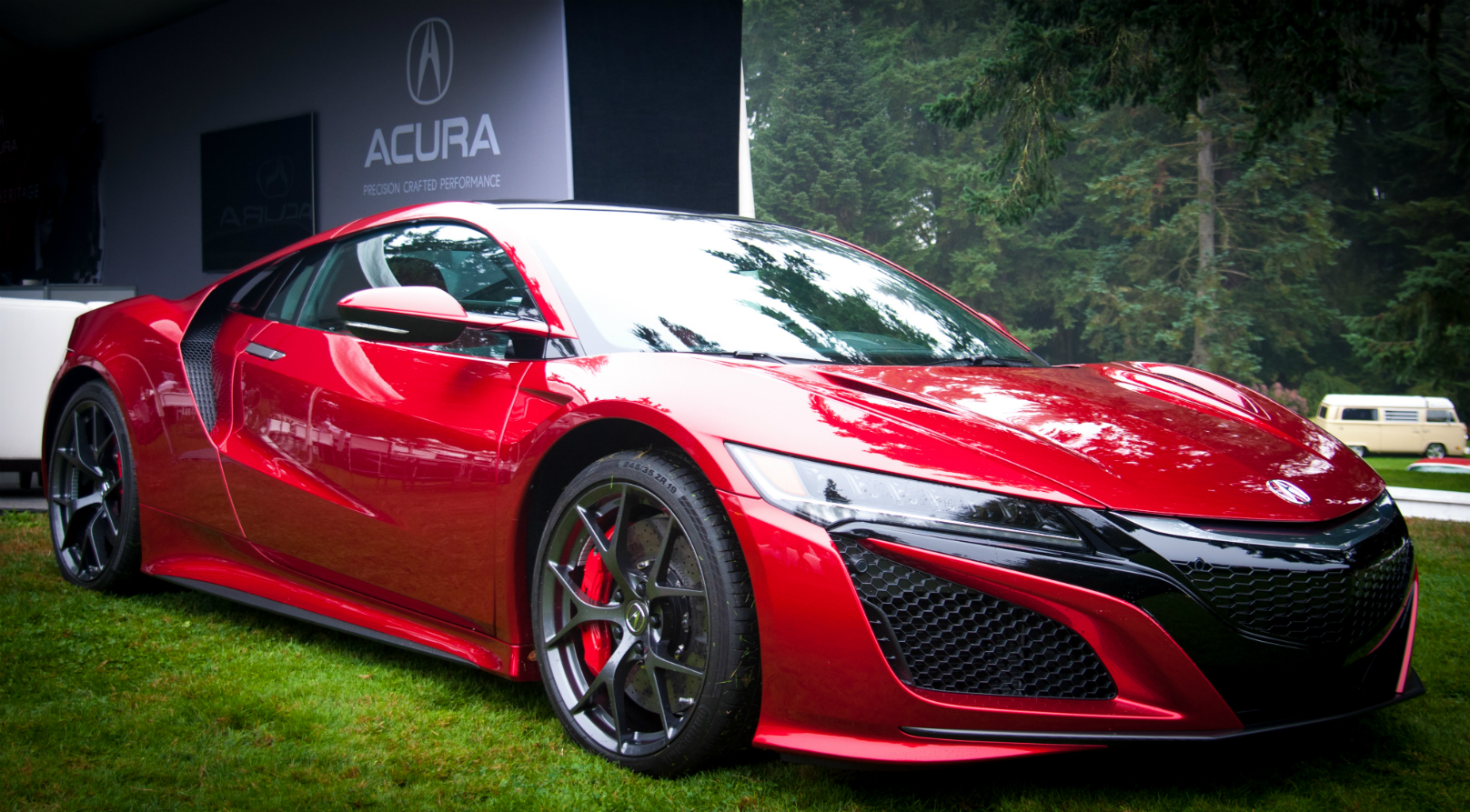 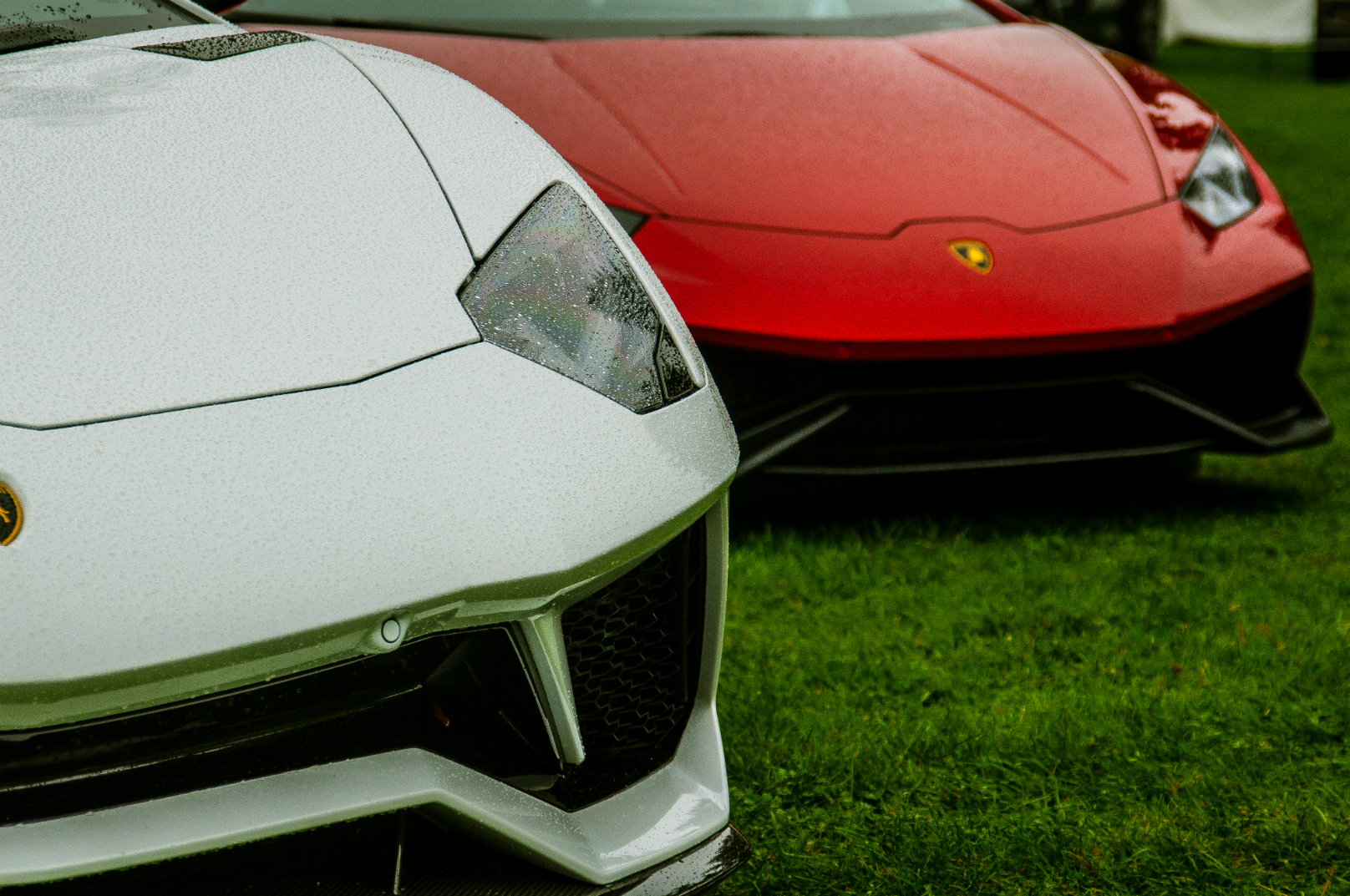 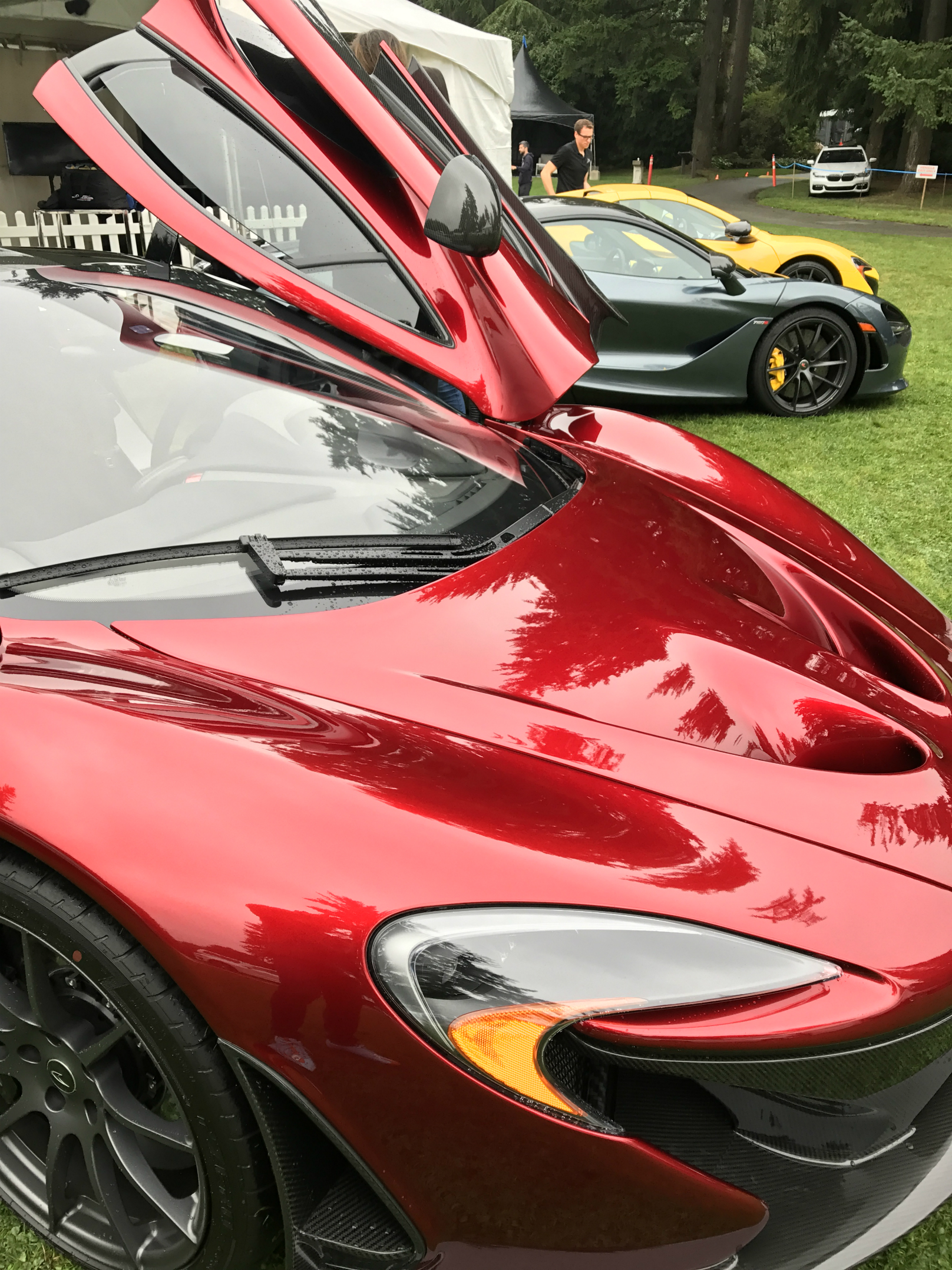 So what does the future hold for LSW? I suspect more multimillion dollar cars, like the Aston Martin Valkyrie, Mercedes Project One, as well as cheaper exotics in the form of the new Ferrari 812 Superfast and the Ferrari California replacement, the Portofino.

We might see more interactive displays with attendees test driving vehicles following the example of the Goodwood festival of Speed held in the UK. LSW will continue to grow and entertain Canadians with displays of luxury, technology and outrageous automotive machines.