Electric vehicles ready for next year

DETROIT—Carmakers at the North American International Auto Show are making great efforts to colour themselves green.

GM, Mazda, Hyundai and Kia stayed out of that game, saying they prefer to focus on hybrids or improving the efficiency of internal combustion. Nissan, which has already begun selling its electric Leaf, didn’t participate in the show.

All but one of the electrics are due on the market next year. Those with fuel cells are aiming for 2015. Given the amount of development work remaining, those dates seem optimistic.

Here is what was on display, and what we can look forward to:

BYD, the Chinese maker of cars and other energy products, is displaying its E6 crossover. It has 50 of these all-battery vehicles on the road in its home country. Most have been leased to taxi fleets and have racked up a combined 2 million kilometres since going into service last May.

The E6 was due to arrive in the United States by the end of last year but its entry has been delayed until 2012 because the raised rear floor must be lowered to suit North Americans’ preference. It’s scheduled to undergo American crash tests in about a month.

The car will come in two configurations. The more powerful Sport is destined for North America. Its claimed range is 300 kilometres and it’s expected to cost about $35,000 (U.S.)

It will be sold only through stores that also carry BYD’s solar cells, home energy-storage devices and other green products. The company, partly owned by investment guru Warren Buffett, will start with five American outlets. While its main market is China, it’s entering the U.S. since cars that succeed there do better back home, a spokesperson says.

Ford is pushing hard for global sales of its family of compact, more fuel-efficient cars, and has a growing stable of hybrids.

To date, its only all-electric models are the Transit Connect delivery van, with a range of about 130 kilometres, and the Focus, which is said to go 160 kilometres between charges.

The Connect is already in the market; Ford aims to have the Focus out in 2012, in the United States.

In an increasingly competitive market, Ford is challenging rivals by offering a more powerful charging station that will cost 30 per cent less than other models, and will charge the Focus in half the time stated for the Leaf and similar models. The company has enlisted Best Buy’s “Geek Squad” to install 240-volt chargers in customers’ garages.

The Focus EV is to enter the U.S. market as a 2012 model toward the end of this year. No pricing is available yet, and plans for Canada aren’t set.

Honda displays an electric version of its subcompact Fit, with a range of 160 kilometres, which is to undergo trials in California this year — in large part to evaluate infrastructure needs and issues around consumer behaviour — and go on sale in Japan and “select markets” in the U.S. in 2012.

Also on hand was the company’s FCX Clarity, powered by a hydrogen fuel cell. It is being leased to a small number of customers, mainly in California, as a demonstration/evaluation test and is due on the market in 2015.

Prices for both vehicles haven’t been announced and, once again, there are no current plans to bring either to Canada.

Mercedes-Benz is attracting great attention at the show with its all-electric SLS AMG E-Cell supercar. With 400 kilograms of lithium-ion batteries powering a motor on each wheel it’s a rocket, with a zero-to-100 time of about four seconds and a top speed of more than 240 kilometres per hour.

The company claims the E-Cell’s range will be 200 kilometres, but expect far less at the speeds it’s likely to be driven, given its 530 hp and 600 lbs.-ft. of torque.

The car, even more powerful than Tesla’s revamped Roadster, features lightweight construction, with extensive use of carbon fibre.

Orders will be taken for delivery in 2013. The price isn’t yet available but it will make the car “exclusive,” a spokesperson says.

It’s a statement vehicle, aiming to demonstrate that “performance and electric driving are not a paradox.”

About 200 units of the much more sedate A-class E-Cell car, with just one motor and a 240-kilometre range, will be leased to customers in Europe starting in April, as a demonstration. There are no plans to bring it to North America.

Mercedes’ B-class hydrogen fuel cell car is due on the mass market in 2015. Demonstration driving has begun, with 700 people in Europe and California paying $899 (U.S.) per month on two-year leases.

The technology works, but like other fuel cell cars, its development will be slow until hydrogen fueling stations are widespread and production costs drop dramatically.

Smart will produce 1,500 units of the electric For-Two it has on display for lease in Europe and the United States. It aims to enter the mass market in 2012.

The car will have a range of about 150 kilometres. The lease rate is $599 a month, but the eventual selling price hasn’t been decided.

Tesla, the California company that was first off the electric mark with its fast Roadster, is displaying the bare aluminum bones of its long-awaited Model S sedan that’s to be on the market in mid-2012.

Tesla is halfway through building a few prototypes of an “alpha” version for tests on lease, with a “beta” to come later.

It will come in three power levels. The basic, with a range of 160 kilometres, will cost about $57,000 (U.S.) before incentives. The others will go 230 or 300 kilometres between charges. Their prices haven’t been announced.

The company is doing everything it can to get the car’s weight down, so the range targets can be met with smaller, lighter, cheaper batteries.

Toyota highlights its expanded family of Prius hybrids at the show, but it is also displaying its Rav4 that’s been electrified using Tesla components. This year, 35 will be sent out for demonstration and evaluation in the United States, and it’s to hit the mass market in 2012.

The vehicle’s range is said to be 160 kilometres.

Toyota is also working on a fuel cell car, to reach the marketplace in 2015.

Volvo, now owned by China’s Geely Automobile Holdings Inc., is staying true to its traditions by stressing safety with its electric C30 crossover. 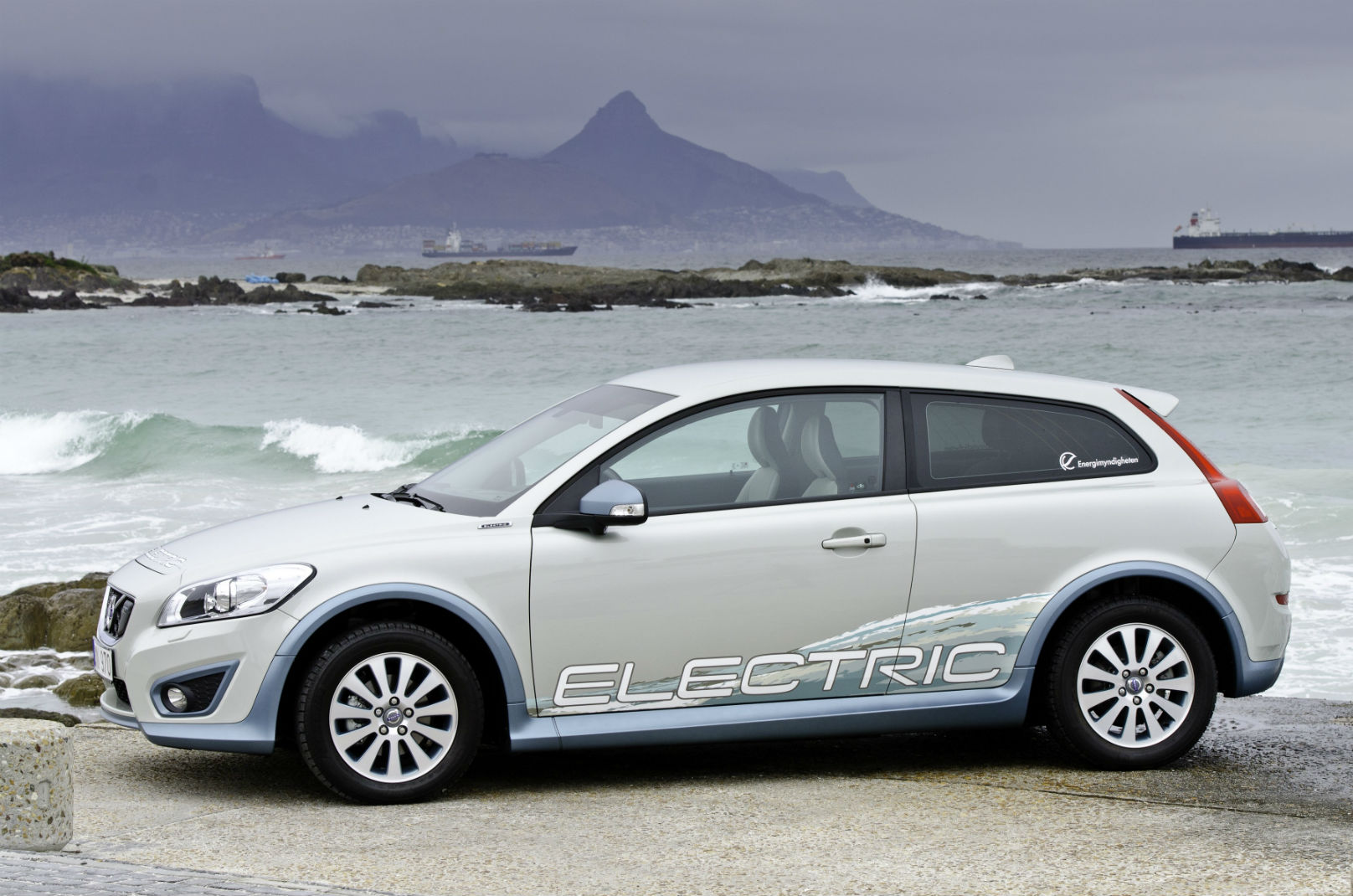 While most companies are putting their batteries into flat packs under the passenger compartment, Volvo — concerned that the pack would be deformed in a side-on crash — is placing most of the cells in taller, heavily reinforced containers that run along a central hump, with some spread under the back seat.

Volvo also emphasizes how it has engineered the C30’s front end to absorb crash impacts in the absence of the heavy engine that helps to do that job in internal-combustion cars. The electric motor and other components sit in a cradle that directs forces toward the fenders instead of into the passenger compartment.

The car’s range is up to 155 kilometres, and top speed is 140 km/h. To maximize the range, it will feature a device that can be programmed so that when it’s plugged in, warming of the battery and the passenger compartment will begin a couple of hours before the car is to be driven, using electricity from the grid.

About 250 are to be distributed in Sweden and elsewhere in Europe for evaluation, and Volvo hopes to enter the mass market in 2012. If all goes well, large-scale production, albeit only a few thousand units annually, will be underway in 2013.