An annual event, the 2019 EcoRun took place in the province of Alberta.

Join the Conversation (1)
CALGARY – Driving in a manner that maximizes fuel efficiency is harder than it sounds.

For one, it’s painfully boring. There’s also the unfortunate consequence of becoming the most annoying driver on the road. Getting passed by tractor-trailers every few minutes is not my idea of a nice time behind the wheel.

But this is exactly what I found myself doing when I signed up for EcoRun--an annual event organized by the Automobile Journalists Association of Canada (AJAC).

Now in its 8th year, EcoRun is a gathering of Canadian journalists who set out to test a selection of the most fuel-efficient new cars for sale on the market. The goal is a simple one: drive a pre-planned route in a variety of eco-friendly cars and try to eke out the best efficiency from them.

The route is split into six legs, each spent behind the wheel of a different vehicle. After each leg, the fuel economy numbers from the car's onboard computer are recorded and then reset for the next driver.

The vehicle lineup consisted of traditional gasoline-powered cars, battery electric vehicles, plug-in hybrids, regular hybrids, a diesel Chevrolet Colorado pickup, and the Hyundai Nexo hydrogen-powered crossover. Hydrogen refueling stations non-existent in Alberta meant that the Nexo was only available on the first day and I wasn’t able to get any seat time in it. 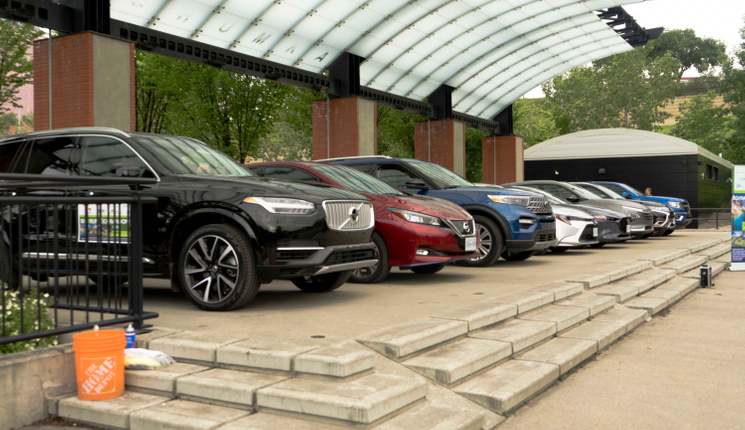 EcoRun is all about obtaining real-world data, so that meant following posted speed limits and not resorting to controversial hypermiling techniques like driving well below the speed limit and drafting behind tractor-trailers. This ensures that manufacturer fuel consumption ratings are put to the test in a safe manner.

After two days and close to 900 kilometres the journalist with the best efficiency score is crowned the winner and receives the coveted green jersey presented by the Canadian Fuels Association.

It was my first EcoRun, so I thought maybe I would be that darkhorse and come from behind and steal that jersey.

Alas, I didn’t win—that honour went to Michel Crépault, a veteran journalist based in Quebec—but I also ran out of patience somewhere between Banff and Calgary. Turns out you need a lot of it. Also discipline. Two things that I found myself in short supply of.

Every year EcoRun is held in a different province. This year, for the first time, it was in Alberta.

The province is known for many things. Among dinosaur bones, spectacular scenery, and a truly diverse landscape, it is also the cradle of Canadian crude and one of the few provinces where oil pumpjacks dot the land.

What Alberta is not known for is embracing green energy. The current government has a rather draconian view on alternative energy sources like wind and solar. It is also one of the slowest provinces to adapt to the growing interest and demand for an electric vehicle infrastructure. And although the sales of electric vehicles are up in the province they still represent just a tiny percentage of the overall market. Alberta is still far and away truck country and it’s hard to picture this changing anytime soon.

But it doesn't end there.

Francois Blouin, Director of Innovation at ATCO a large holding company involved with delivering energy to Albertans understands the need for green transportation and clean energy. In 2017 ATCO made their first investment to install a network of fast charging stations between Red Deer, Calgary, and Edmonton. Francois says that these powerful charging stations source their power from green, renewable sources, which sounds to me like a good start. It might be an uphill battle now, but things are, at the very least, headed in the right direction.

Even more promising is Petro Canada’s proposed "Electric Highway", a plan to install a coast to coast fast charging network that will consist of 57 Level 3 fast-charging stations, each capable of regenerating two cars at a time. These charging stations will be located at existing gas stations and not tucked away in a dark area in the middle of nowhere.

We stopped to fuel up at a Petro Canada gas station in Canmore chosen as the first in Alberta to join the Electric Highway. And if you live near Milton, Ontario there’s a couple of these fast chargers located in the Petro Canada at Steeles and 25. It’s free for a limited time, so if you own an EV or plug-in hybrid be sure to drop in for a spot of charge.

Beginning our EcoRun journey in Edmonton we were waved off with the traditional green flag by The Honourable Amarjeet Sohi, Minister of Natural resources, and Don Iveson, Mayor of Edmonton.

The car I started with was an automatic 2019 Mazda3 sedan equipped with the new all-wheel drive system. Additional weight and two extra driven wheels make it a bit less efficient according to the NRCan data. 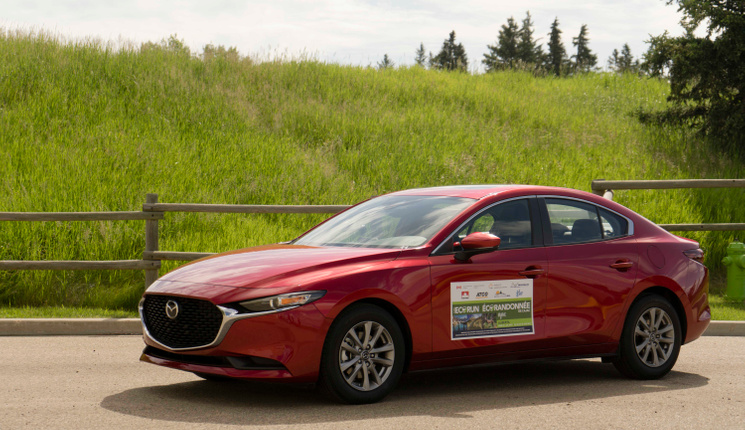 Sticking to the speed limits, one thing becomes glaringly evident: no one, and I mean no one, drives at or below the limit. So when people are getting their knickers in a twist over Ontario proposing to raise the speed limits by a mere 10 kilometres an hour it just seems like a lot of senseless bickering over something we're all doing already.

Arriving at our first stop in Red Deer, the Mazda clocked in an insane 5.1 litres per 100 km, well below its NRCan rating of 8.2 and a record for the car in this competition. 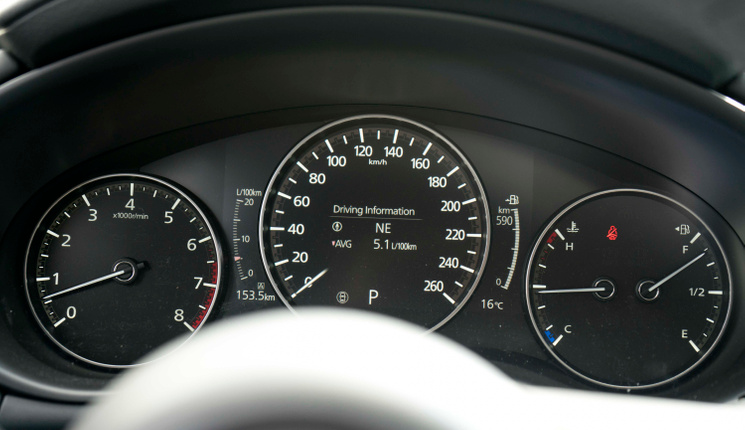 How’d I do it? I stuck to my guns and stayed in the right lane within 5 km of the 110-km/h speed limit, while traffic drove around me making sure to get a good look at the driver of the slowest car on the road. I left the AC off and cracked the windows every half hour to let in some fresh air. I remained conscious about my throttle and braking inputs making sure to avoid any abrupt speed changes. Smoothness is key, but the new Mazda3 deserves most of the credit here for its super-efficient drivetrain.

For the next leg I was in the Mitsubishi Outlander PHEV—the world’s best selling plug-in hybrid. The route would take us from Red Deer to Drumheller, home of one of the richest dinosaur fossil deposits in the world.

The hoodoos and coulees that surround the Royal Tyrell Museum appear out of nowhere, the landscape changing dramatically like you’ve left earth and warped to another planet.

With 37 km of electric range from a full charge the Outlander PHEV might never need to be gassed up. If your commute is short enough. But out on the open road that EV range disappears rather quickly. You can recuperate some of it with regenerative braking and coasting where possible but once battery charge dwindles the gas motor steps in and does most of the grunt work. I saw about 30 km of gas-free driving which helped me achieve a still impressive consumption figure of 5 L/100 km. 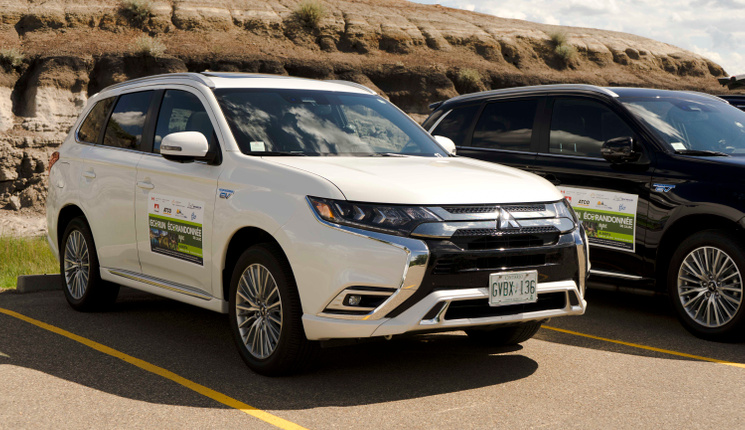 Drumheller feels like Canada’s Death Valley. The lower elevation and desert-like landscape feels 10 degrees hotter than everywhere else. So, it wasn’t exactly the most comfortable place to wait for an electric vehicle to charge.

But such was my fate as the next leg of the trip that would take us to Calgary, our final stop for the day, had me scheduled to drive the striking new Jaguar I-PACE electric crossover.

Calgary was about 160 km away and with only 130 km of range showing on the I-Pace it meant that it would be a risky proposition to try and coax the big Jag home.

After about an hour hooked up to a Level 2 charger that seemed determined to supply its electrons in a slow trickle, the decision was made to leave the I-pace behind. Disappointing, because I was really looking forward to driving it. Another time, perhaps. 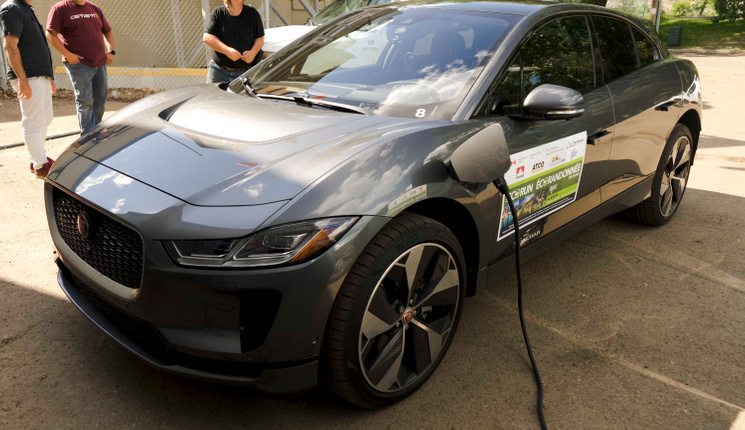 The next morning brought jerky. Some of the best I’ve ever had. If you’ve ever been to Longview, Alberta you probably know the place. Cowboys, weary travellers, road trippers, and even Clint Eastwood among other Hollywood names have paid homage to the Longview Jerky Shop that’s been serving up scrumptious dehydrated beef snacks since 1978. I arrived there in the Volvo XC90 T8 plug-in hybrid, covering the distance from Calgary with an average consumption of 5.4L/100 km, another impressive number easily eclipsing the factory rated average of 7.2. Don’t forget that the XC90 is a fairly large luxury SUV with an interior covered in finely stitched leather and large planks of polished wood. 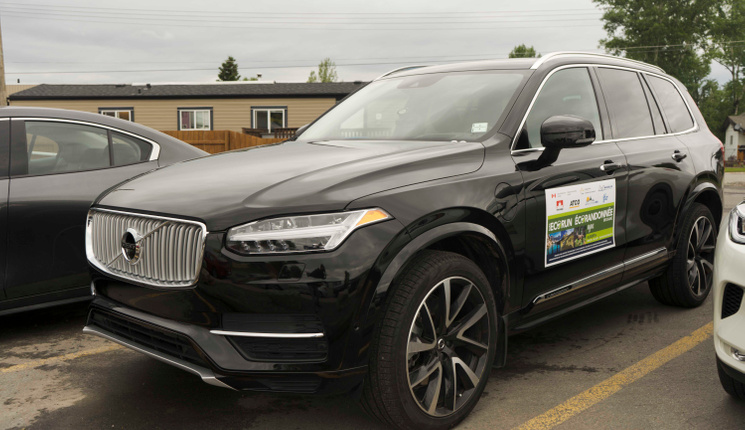 My best result of EcoRun came from none other than one of the OG’s of hybrid manufacturers—Toyota. And this time it wasn’t the Prius but rather the all-new Corolla hybrid. Following some lovely back roads for most of the stint between Longview and Banff the much better looking and driving 2020 Corolla Hybrid registered a miserly 3.7L/100 km, again lower than the claimed 4.5 the manufacturer rates it at. 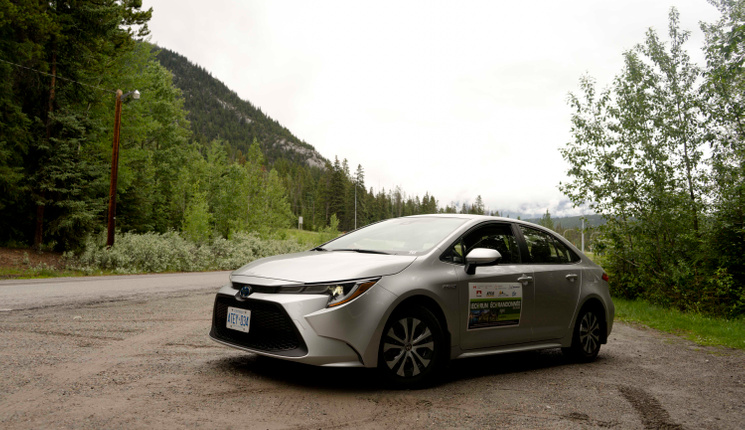 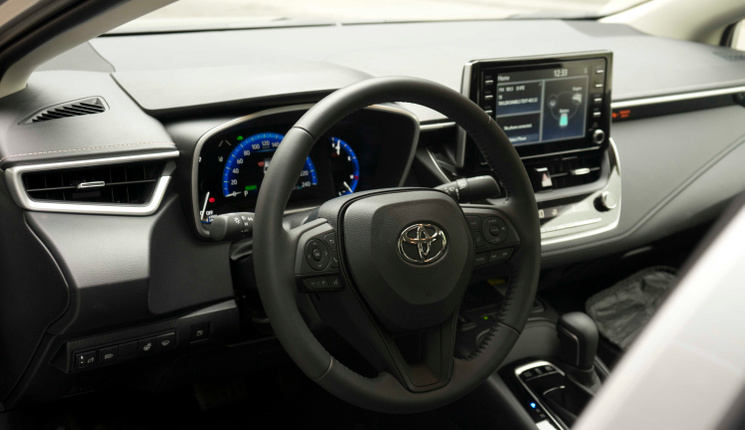 My EcoRun began with a Mazda3 and ended with one. This time it was a front-driven hatch, and I theoretically should have netted a better result in it than the AWD version. But by this point, tired and burnt out, I drove normally paying much less attention to efficiency. That made the 5.7L/100 km recorded during the final leg all the more surprising. I really liked the Mazda3 in a recent comparison I did with it versus the Honda Civic, but with numbers like that, I’m an even bigger fan now.

It seems there are still innovations being pulled out of the 4-stroke hat.

The Mazda3 and the Nissan Altima recorded averages of 5.4 and 5.7L/100 km, respectively. That’s over 40 mpg for our U.S friends. Astonishing figures once reserved for small diesel cars or hybrid-electrics.

One of the cars at EcoRun was Infiniti’s QX50 equipped with the world’s first variable compression engine. It took them decades for what might seem like a small gain but the results are promising and an average (during EcoRun testing) of 7.2L/100 km for a mid-sized all-wheel drive luxury SUV is nothing to scoff at.

The race to get electric cars into everyone’s driveway is in full swing with manufacturers setting ambitious EV goals and some governments calling outright bans on internal combustion engines. But the reality is that ICE engines are still the dominant motive force on our roads today.

It’s still easier to transport fuel to remote parts of the country than it is electricity. And the massive demand for lithium-ion batteries isn’t exactly the ideal solution to our environmental problems. Hydrogen is a viable alternative but that’s not perfect either and the infrastructure is non-existent.

What EcoRun opened my eyes to was that with a bit of effort, restraint, and modification to your driving style you can easily improve the efficiency of any car, including the one in your driveway. And for now, while the next step in what powers the car of the future is figured out, it might be the easiest and greenest solution we have.

Click here for all the official EcoRun test numbers.