What some automakers are doing to curb potentially deadly driver behaviours

Join the Conversation (0)
Between an explosion in social media platforms and messaging apps, streaming music services and real-time navigation, Canadians have never been more connected, entertained and informed. The problem is some people are accessing these modern conveniences while driving.

Perhaps it’s no surprise the Ontario Provincial Police said distracted driving is the No. 1 cause of accidents in the province, with an estimated eight out of 10 accidents caused by tapping on a phone or a fiddling with an in-vehicle infotainment system (as well as other distractions, like talking, eating or drinking coffee).

In a 2020 survey, the Canadian Automobile Association (CAA) found 47 per cent of Canadians admitted to typing out a message or using the voice-to-text feature while driving.

Vehicles, too, are increasingly embedded with technology that might not help to curb potentially deadly behaviours. In January, Tesla agreed to disable its Passenger Play feature, which allowed games to be played on its touchscreen while the car is in motion, in a software update. This announcement came after an investigation launched by the U.S. National Highway Traffic Safety Administration, which claimed these games “may distract the driver and increase the risk of a crash.”

“Tech is sellable as a feature, and it speaks to a manufacturer’s ability to develop and apply new technology to their cars to help them stand out in a highly competitive field,” said Robert Karwel, senior manager for JD Power’s Power Information Network in Canada. “Even a customer who is not that tech savvy will likely pinpoint the association between high technology and a car brand that is worth pursuing.”

While more technology might lead to more distracted driving, car makers are also attempting to curb this growing problem. “Yes, distracted driving is a real phenomenon,” said Karwel, “and the car manufacturers do take steps to stay on the ‘right-side’ of this question.”

Here is a look at what some of the things a few manufacturers are doing to help address distracted driving.


To help keep a driver’s eyes on the road, Toyota Multimedia’s Virtual Assistant uses quick voice commands rather than touch controls. Several features accessible through the vehicle’s multimedia screen are locked once a vehicle is in motion, including setting up Bluetooth, managing favourites or accessing vehicle customization options. The keyboard control will not even display on the screen when the vehicle is in drive mode.


Like many auto makers, Chevrolet supports Apple CarPlay and Android Auto, which lets you connect a device (wired or wireless) to offer a similar look to the car’s touchscreen – but only certain apps and features can be accessed while driving. With SuperCruise, GM’s hands-free driving option, if the in-cabin camera detects you may not be paying attention the steering-wheel light bar flashes green to prompt you to pay attention to the road. If it continues, it will flash red and beep to alert you to look at the road and steer manually. There are also safety settings for teen drivers.


All Honda and Acura vehicles come equipped with various tech designed to help prevent distracted driving. For one, the infotainment system prevents certain functions from taking place if the vehicle is not in the park position, such as pairing Bluetooth devices to the vehicle. The 2022 Honda Civic and 2022 Acura MDX include Smart Shortcuts, an A.I.-powered assistant function that enables users to execute frequently used actions quicker and with fewer steps.


Changing user settings, phone pairing and entering destination information into the GPS system can only be completed while the vehicle in is park. As part of its Advanced Driving Assistance Systems in some vehicles, the driver will be alerted if unusual driving patterns are detected or if the vehicle is still stationary when the preceding vehicle has started to move forward.


Many Nissan vehicles offer lane departure warning, as well as alerts and assists to help the driver return to the center of the lane. A heads-up display helps keep the driver’s eyes on the road instead of looking away, and many infotainment settings are disabled when the vehicle is in motion. If the vehicle detects behaviour consistent with a drowsy driver, the system uses an audible chime sound and displays an amber coffee cup with a message reading, “Take a break?”


Hyundai’s IONIQ 5 features a Head-Up Display with Augmented Reality mode, essentially turning the windshield into a display screen to view relevant information instead of turning one’s head to look at a screen. Standard with its SmartSense safety suite, Driver Attention Warning displays the driver’s attention level and provides a warning when signs of inattentiveness are detected and recommends a rest. 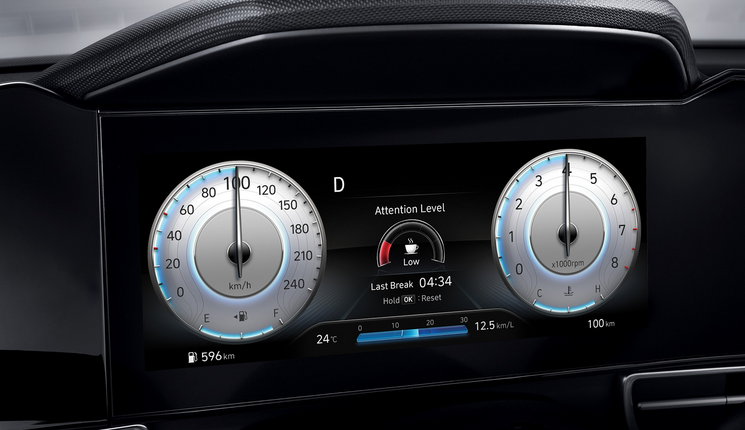 
Along with safety features like collision avoidance, lane keeping aids and blind spot information, its vehicles include voice command features, enabling hands-free control of components, in addition to convenient steering wheel controls. The company plans to install cameras and sensors to monitor drivers for signs of intoxication or distraction.


Activated by saying “Hey Mercedes” or a button on the steering wheel, the Linguatronic system supports functions such as asking for a destination, placing phone calls, writing and hearing messages, climate control and lighting settings. Unveiled in 2018, the Mercedes-Benz User Experience includes a streamlined dashboard screen to minimize looking away from the road, along with augmented reality in the navigation display. The micro-sleep warning system in the EQS and S-Class models analyses the driver’s eyelid movements through a camera.


The automaker offers voice control and hand gestures (in some models). Some of its other features include certain menus and functions being limited if the car is going five kilometres per hour or faster. There is also a heads-up display that projects pertinent information, and tools that monitor the driver’s nose and eyes position when certain driver assistant systems are in use.