Driving the ‘Best Road in the World’: The Transfagarasan

As far as first impressions go, the rusting hulk of the train seemed a far cry from the legendary road it was slowly drawing me towards.

I was clambering up the rickety metal stairs into the carriage, shooing away the transient “helpers” – locals who make a quick buck by escorting unsuspecting travelers to the clearly-marked train platforms before demanding exorbitant sums for their largely superfluous assistance – when I glanced around and took stock of my bleak surroundings.

The locomotive was a tired relic of the Soviet era. Chipped paint cascaded down its sides and onto the track, which lazily disappeared behind us. Threadbare seats lined the edges of the car. A handful of travelers, sparsely distributed throughout the carriage, looked up warily as I entered. I sat alone, trying to avoid thinking of the inevitable trip to the washroom I would have to make on this eight-hour trip from Sofia, Bulgaria to Bucharest, Romania. Having glanced in at the toilet earlier, it was more a sense of dismay than shock that greeted me when I saw that the bowl deposit directly onto the track below. Plumbing, it seemed, was a luxury. So was air-conditioning.

Behind me, twilight descended over the hills surrounding Sofia, Bulgaria’s glimmering capital. Ahead, in the darkness, miles of track stretched towards the border, interrupted only by quiet streams, sunflower fields waving listlessly in the early-evening breeze and occasional roving bands of gypsies trudging along the edge of the gravel-strewn track, pausing their pilgrimage to casually hurl a couple rocks at the train as it rumbled past.

Like most backpackers, I was traversing from one Eastern European capital city to another, indulging in the bargain prices, decadent dining and wild nightlife that make the former Soviet states of southern and eastern Europe such a popular destination among young travelers with a bit of cash to blow.

Today, I had woken up in Sofia – the country’s glittering capital, whose church spires and grandiose boulevards loom ominously as one glides through the countryside towards the metropolis. I grabbed my small bag of belongings and dashed through the streets, away from the city centre and towards the train station, an austere, glass-walled structure reminiscent in size and design to an international airport. And then I began the slow journey northeast towards Bucharest, where I’d board another train headed into the mountains of Transylvania.

My destination was the renowned Transfagarasan Highway in Transylvania, a stunning alpine highway brought to international attention when Top Gear’s Jeremy Clarkson and his entourage ascended the undulating alpine pass in supercars.

An avid follower of Top Gear, the long-running BBC series, I was familiar with the road, having watched in awe as Jeremy Clarkson, Richard Hammond and James May ascended and then descended the treacherous pass in their characteristically brash, loud exotics, downshifting into hairpin turns, oversteering corners mere feet from steep slopes descending into fog, all while marveling at the views – unobstructed by guardrails in many places. Jeremy Clarkson famously called it the “best road in the world.”

And, when you finally get there, having lurched through endless stretches of Bulgarian countryside; waited patiently at the border for hours while dubious border guards lazily collect passports for inspection; and batted away hordes of unscrupulous taxis that circle the Bucharest station looking for a naïve tourist to dupe, it’s easy to see why.

I was eager to experience it for myself.

So when my hostel roommates handed me the keys to a rental car, entrusting me – the only traveler capable of shifting gears manually – with driving the Transfagarasan, I seized it – before I remembered my crippling fear of heights.

The haphazard plan took shape the night before. It included: four travelers, a rental car and the famous mountain pass.

The early morning sun gleamed off the cobblestones, obscuring all but the faint outline of the dated hatchback that lurked in the shadows.

I was standing in Brasov’s town square – a charming Romanian city that stands at the gateway to Transylvania’s foreboding mountains, a region as renowned for breathtaking views as it is mired in folklore. Home to Bram Stoker’s Dracula and tales of mystery passed down through generations, there’s a particular allure to this remote region of the country – a sense of foreboding; of mystery and adventure.

My circumstances were markedly different from the Top Gear crew. There would be no supercars in my circumstances. There were no helicopters filming my ascent – just my new friends snapping photos out the windows with their smartphones, while I gritted my teeth and focused my attention on the winding road, and not the slopes that dropped away outside.

Instead, I was climbing into the cramped, dated cockpit of a Dacia Sandero. Ironically, it was the same model that Clarkson jokingly gifted James May during their Romanian road trip. May’s Sandero met an untimely fate when a truck driver backed into it and crushed its side.

Pushing aside the paralyzing thoughts that echoed in my head, my excitement at following in Clarkson’s footsteps (or, rather, tire marks) prevailed, and I found myself whizzing through the Romanian countryside towards the foreboding mountains where the highway lies.

Like many aspects of traveling through former communist strongholds in eastern Europe, the Transfagarasan doesn’t make much practical sense.

Built in 1974, the stunning road is a testament to both the hubris and paranoia of Nicolae Ceausescu, Romania’s former, longstanding dictator. Not content with the highways that already crisscrossed the lowlands surrounding Transylvania’s mountains, he instead opted to build a road that went through them – quite literally. At its highest elevation, the Transfagarasan bores through the peak of a mountaintop, temporarily ensconcing drivers in the total darkness of a dark, damp tunnel and then continuing down the slope on the other side.

The cost was tremendous – both financially and in human terms. Official state estimates put the death toll during construction at around forty – but realistic figures suggest it was in the hundreds.

The road itself is now mostly a tourist attraction, unfit for daily travel for Romanians due to its seasonal closure through much of the winter and spring, when snow drifts and glacial melting submerges the road in icy water.

But every weekend hundreds of motorists make the pilgrimage to the famed alpine pass: the international tourists in rented hatchbacks, the Germans and Swiss in dark luxury motors, the Romanians in modest sedans, snapping photos and unfolding picnic lunches on the shoulder of the road, munching on sausage, meat and cheese mere feet from breathtaking precipices.

When I found myself ascending those same switchback turns, I hardly had a moment to glance at the families lunching atop cliffs, picnics spread atop blankets billowing in the alpine breeze, as if they’d jumped straight out of an advertisement for insurance or Coca-Cola. No, I was gripped with fear, watching the road ahead of me curve to the left while my line of vision peered down into valleys and canyons, totally unobstructed by pesky guardrails. And while fear gripped me, I gripped the wheel – white-knuckled, white-faced, only ever peeling my right hand, warily, off the wheel to shift gears, trusting my left hand to initiate the correct amount of force necessary to keep the tiny hatchback in line with the perpetually-curving road.

As the whining, four-cylinder engine of the Dacia grappled with the ascent, we reached the top of the tree line and emerged from the fog into the clear, thin air of high-altitude highway. And there, ahead of us, was the most famous section of the highway: a stretch of road looped in straight switchbacks reaching up the scraggly cliffs and sheer rock faces of the mountain’s peak. We pulled over, snapping photos of the seemingly impossible journey ahead. The road’s layout was almost entirely horizontal: sections of road were placed across the mountain’s face, like steps carved into the rock linked by U-turns so tight that cars slow to a near crawl as they curl around to face the next straight.

And here, finally, guard rails appeared – at first a welcome sight, which induced a collective sigh of relief within our car. But then a disconcerting thought: if the road we’d just travelled – harrowing, terrifying, dangerous – didn’t give the Romanians pause for thought about guard rails, what horrors must this next section of road hold?

Suffice it to say that I can’t remember breathing very much – let alone thinking much – as we ascended the rocky cliffs, occasionally bringing the car’s wheels onto the outside shoulder to squeeze past cyclists and pedestrians puffing their way up to the peak. But when we finally reached the summit, rolled into a hilly, ad-hoc parking lot carved into a small meadow and shakily wandered into an alpine restaurant for a spot of lunch, I was ready to hand driving privileges over to someone else in the car.

The problem: no one else in the car could pilot a manual transmission. And so my duty for the afternoon remained a modest one: presiding over the lives of my fellow backpackers while squeezing our beloved Dacia down a narrow, winding alpine road in the heart of Transylvania.

Supercars be damned: the best way to experience the Transfagarasan is crammed into a small hatchback with a gaggle of strangers, flipping through gears while the engine strains against the altitude, adrenaline coursing through your veins and sweat dripping onto the car’s dated, cloth interior. 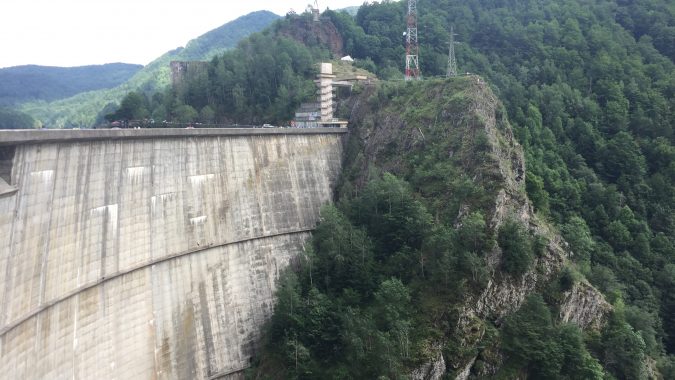 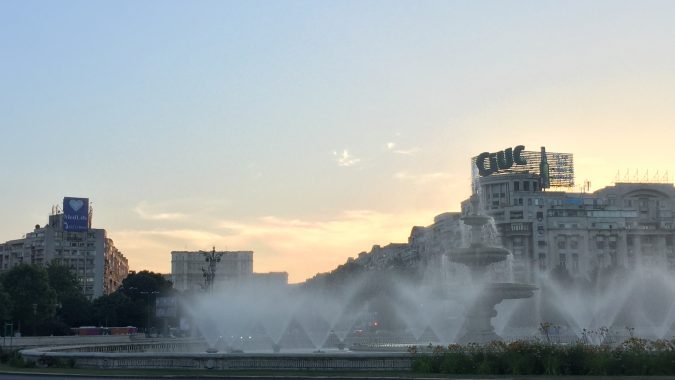 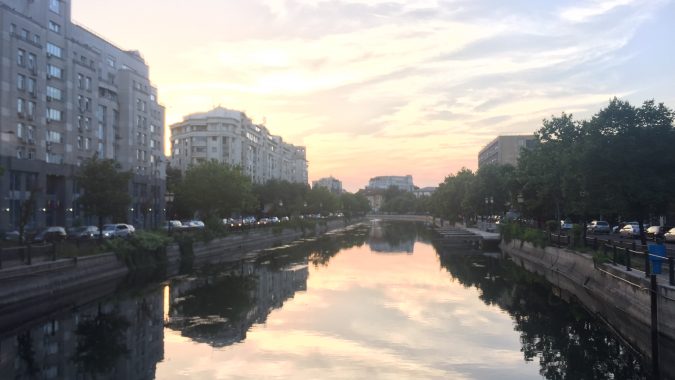 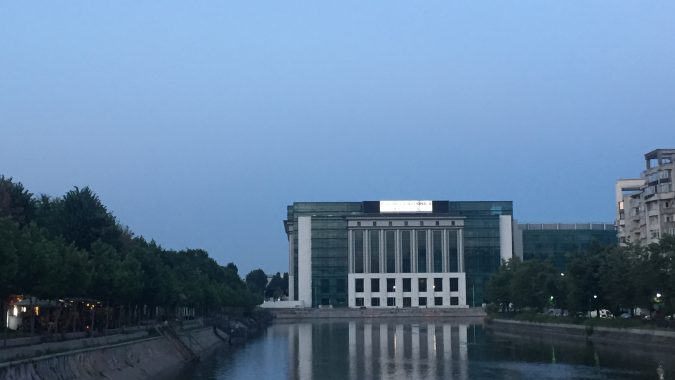 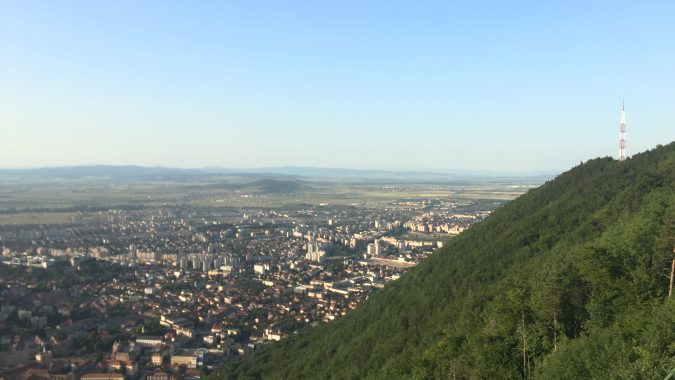 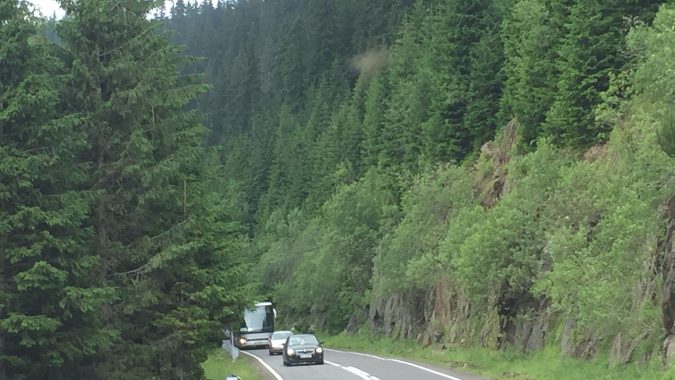 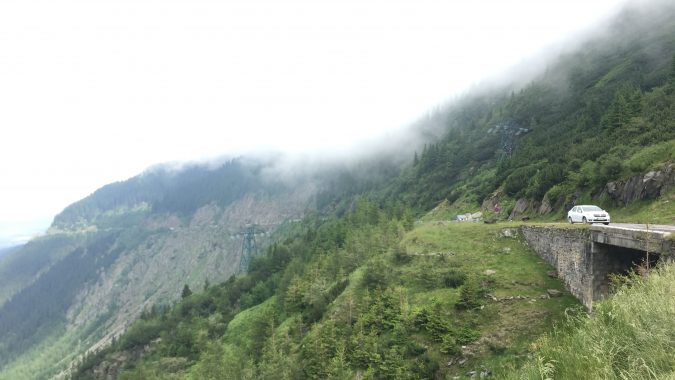 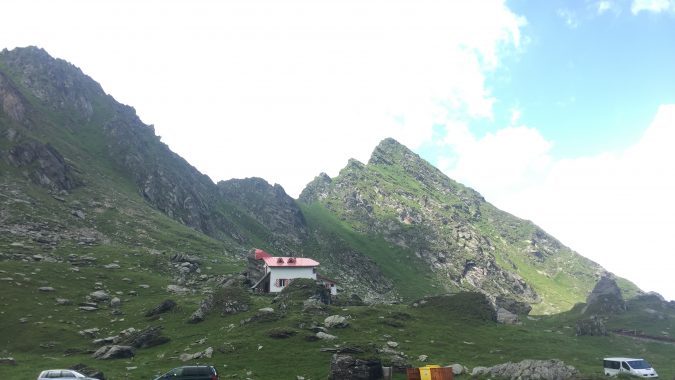 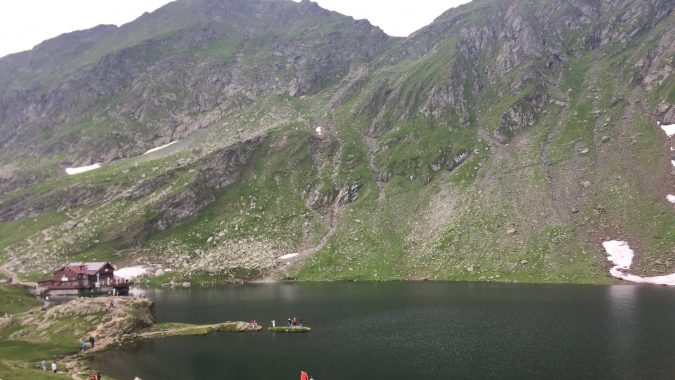 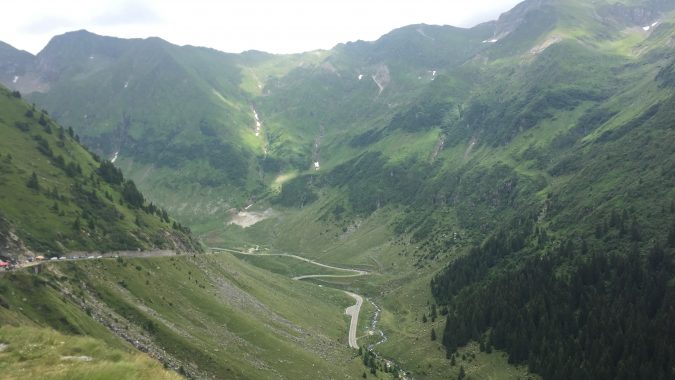 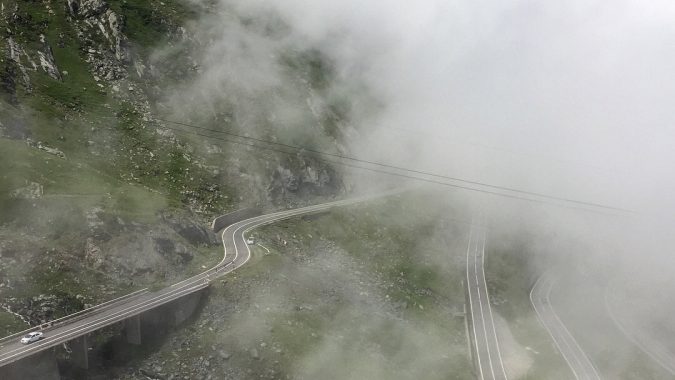