Driving Home for Christmas: The day my dad found a pitchfork he’d lost in a river 45 years earlier

Generally, at this time of year, I write a column based on the wonderful holiday song, Driving Home for Christmas, written and performed by Chris Rea. That is usually the only reference to cars or driving you will find.

I can’t wait to see those faces

This started years ago when Mark Richardson, who was editor of Toronto Star Wheels before me, walked over to my desk one day and said these exact words:

“I don’t have anything to put in the Wheels section this week. It’s Christmas and everybody has gone on holiday. You are my only hope. Write about anything you want. Tell our readers some of your stories. Just remember: write long.”

That is not a good thing to say to me. I have been known to type a dozen paragraphs, just to get warmed up. Editors usually send my stories back to me with the instruction, “write this tighter.” In any event, I took a deep breath and let loose with an opus that took up two full pages in the paper. I am not making this up.

I told a story about my dear friend, Roger Stanion, who is now past tense, and how we took a couple of women to Montreal for the weekend (we were both single at the time), and how, driving home, I got us stuck in a ditch on Highway 17 near Ottawa in the middle of a raging snowstorm and how a transport truck came along and pulled us out and if that hadn’t happened, I’m afraid, we’d have been goners.

One of the girls, the one I was sweet on, was so furious that she hasn’t spoken to me since, which is a long time to get the silent treatment, let me tell you.

Since then, this particular column has evolved into reminisces of Christmases past, a farewell to people in my life who have died, and stories that haven’t been in the paper but should have been.

So settle back, pour some hot chocolate or a coffee, and take a little trip down Memory Lane with me. A gingerbread cookie might go good too.

With a Thousand Memories . . .

I used to tell this story every Christmas to my little girl, who’s now all grown up and has two kids of her own.  It’s about my father, the late J.A. (Al) McDonald, and a rather amazing coincidence. But first, I have to tell you a about him. He was a very capable and talented guy, a good man.  When World War II ended, he got a job with the Spruce Falls Power & Paper Co. in Kapuskasing. He did well with the firm but his real love was a Young Man’s Bible Class he conducted at the United Church on Sunday nights.

I was an asthmatic kid, so he got involved with the TB and Respiratory Disease organization (now called the Lung Association). He was a member of the Lions Club and served as a District Governor.  He did a lot for the community.

One interesting thing (of many) about my father was that the further up the corporate ladder he climbed, the unhappier he got.  Spruce Falls was a subsidiary of Kimberley-Clark Corp. and KC moved him into their corporate lineup and transferred him from Kap to Niagara Falls, then to their factory in Rexdale and finally to head office in downtown Toronto, where he retired, having had enough.

His job near the end was to negotiate contracts at company facilities across Canada. He didn’t like having to nickel-and-dime union people who were only trying make a living. It really bothered him. I think if he’d stayed in Kap and continued his church and volunteer work that he’d have been a much happier man.

My father was born in 1913 in the farm country of Nova Scotia’s East River Valley. It wasn’t an easy life for a kid because you went to school and then had major responsibilities at home. Keeping cattle, goats, sheep and chickens was a lot of work but you had your chores and were expected to tend to them without having to be reminded. 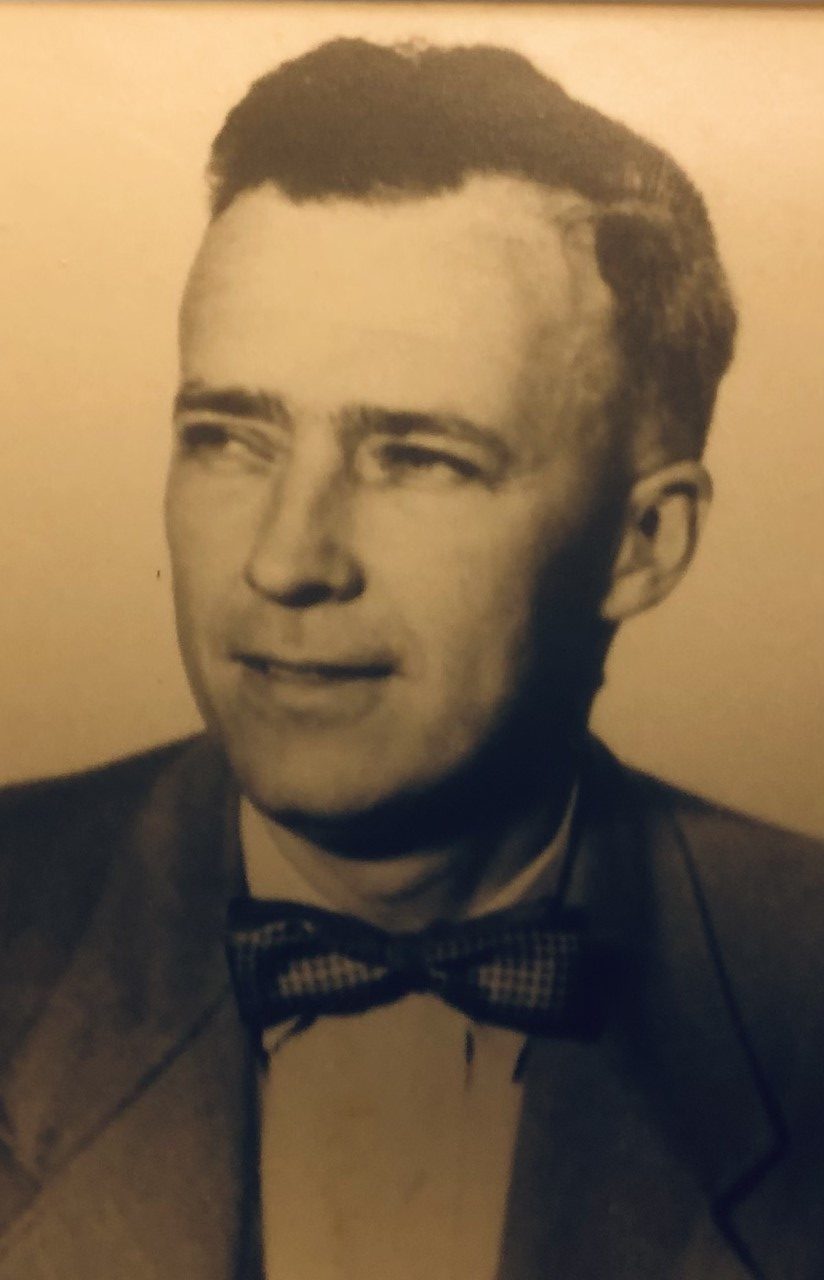 There also weren’t that many other children in the Valley. My father went to school in a one-room schoolhouse that went from Grade 1 to 12 (can you imagine being the teacher!). His best friend was another farm boy, Hoyes Cameron, who was six years older

One night in early October, when my dad was seven, Hoyes suggested they go after a salmon. A good-size fish could feed a family several meals. But he wasn’t thinking of standing beside the East River with a fishing rod (salmon were out of season anyway); no, he was suggesting spearing, which is even more illegal. That’s when, in the dark, you shine a light on water and the fish get curious and swim over for a look. You can imagine what happens next.

So Hoyes went home to get a lantern and my father went to get his pitchfork.

An hour later, down near the river as it ran through the nearest town, Bridgeville, Hoyes held his lantern over the water and, as expected, there was a flash. My dad had his shoes off and jumped in and speared the fish. He’s standing there, holding the struggling fish up and out of the water, the two of them giggling like crazy, when they hear a deep, booming voice:

It was the Mounties. It doesn’t matter if you’re seven or 70, poaching is poaching. So Hoyes dropped his lantern and took off one way and my father dropped his pitchfork and the fish and ran off the other. They both managed to escape, even though they really had to scamper, that Mountie hot on their heels. 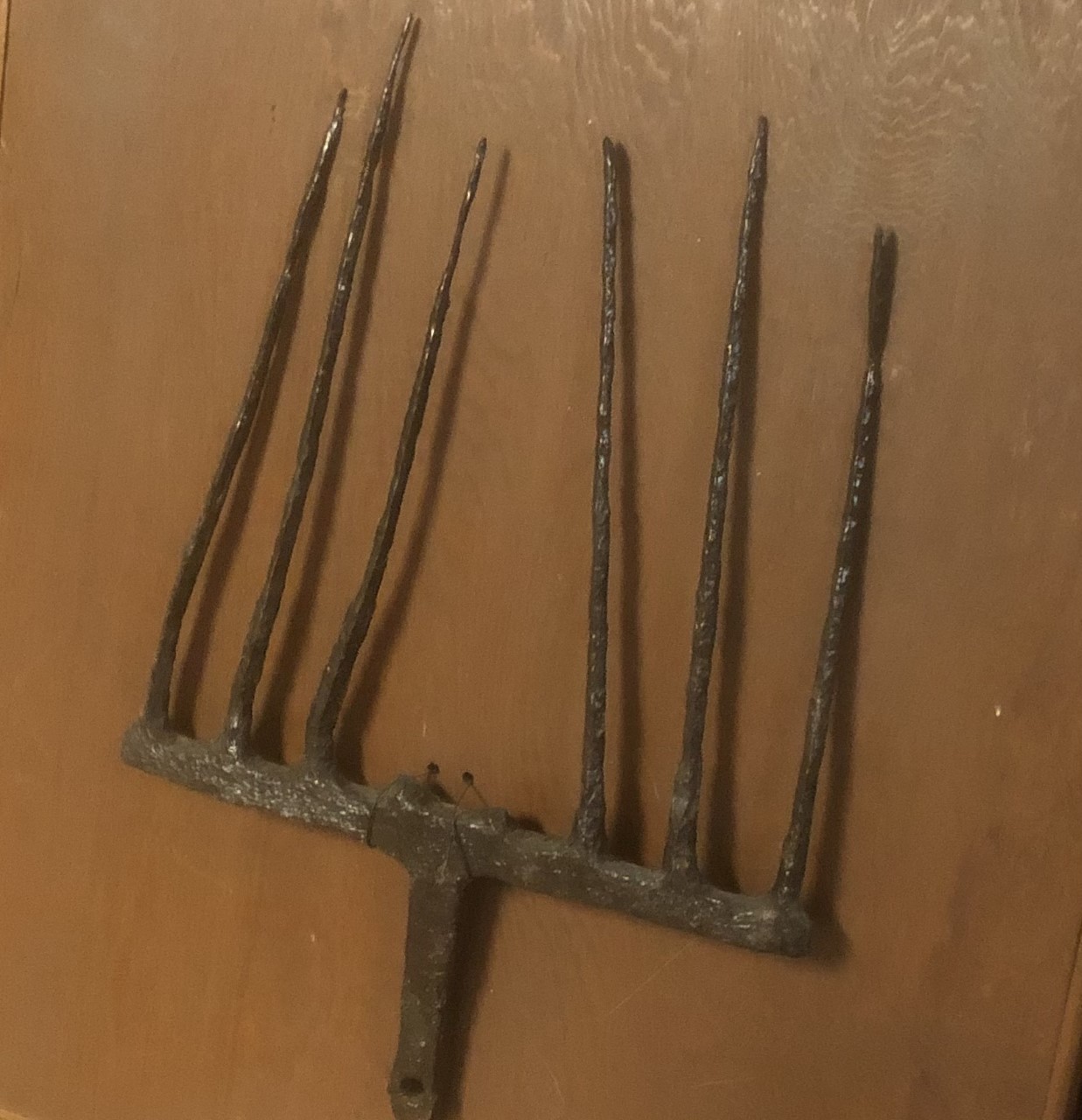 Before dawn broke, my dad was out of bed and, figuring the coast was clear, back down at the river. He had to find that pitchfork or he’d be in big trouble. You didn’t just go over to Home Hardware and pick up another one in those days. It was a tool and had to be respected.

Finally, he had to tell his father what had happened. His father, Daniel William MacDonald (or “Dan Willy,” as the other farmers called him) threatened some woodshed justice but held off, suggesting that my dad had better find that pitchfork or he would be in for some serious discipline.

For weeks, my dad continued to look for that pitchfork, but no luck. It was gone forever – or so it seemed.

In 1965, I had gone to Nova Scotia to visit my grandpa for a few days and my dad and mom were there on vacation. It was a sizzling summer day and dad and I had gone down to the river to find a spot deep enough to have a swim.  We were just wandering along.

Now, my dad was a born woodsman. He taught me how to shoot a gun for hunting, and to fish for trout. We’d be walking along and his eyes were constantly moving. He’d see a partridge before I did, or a deer. So we’re walking beside the East River and he suddenly stopped. “Wait a second,” he said, “There’s something out there in the water.”

He took off his shoes and socks, stepped off the bank, and waded out into the middle of the river where he reached down, grabbed something, and gave a mighty yank. He pulled out a black hunk of something that was covered in muck.

It was his pitchfork. My old man had found his pitchfork, 45 years after he’d lost it. The wooden handle had long ago rotted away but the fork itself, somewhat eroded, was frail, yet intact. 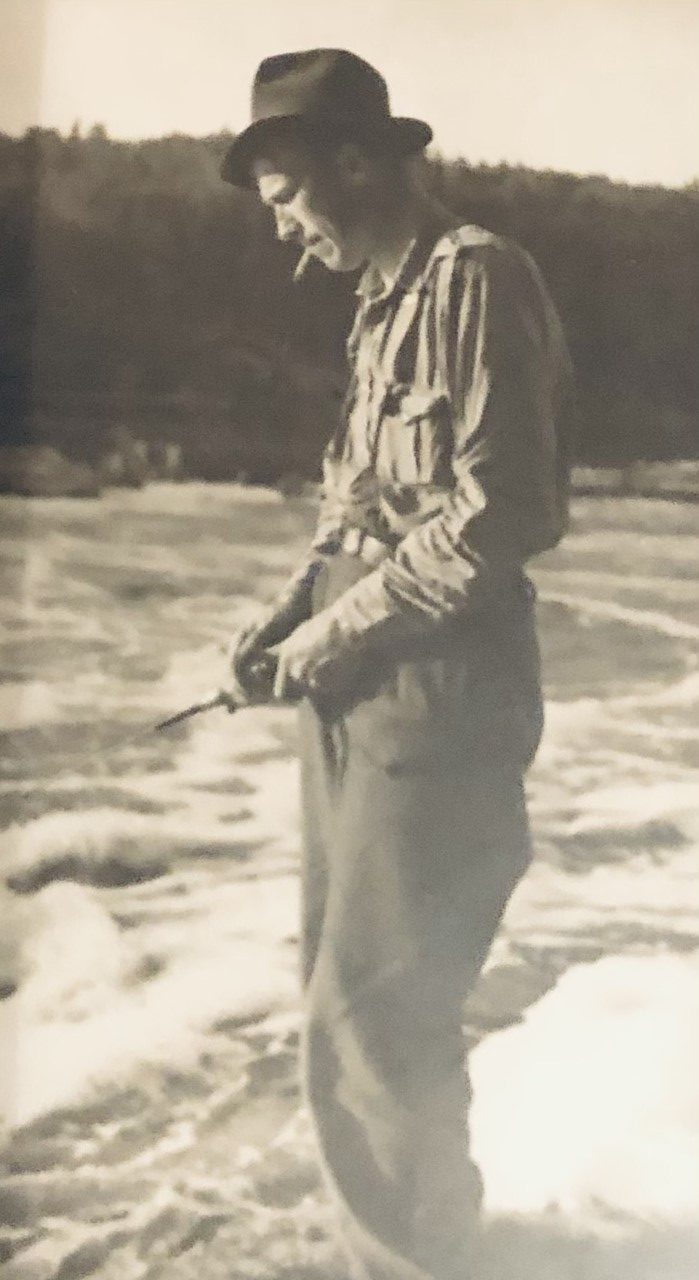 My dad was suddenly seven again. He whopped and hollered for his father, who was sitting outside on the front verandah of the farmhouse. He ran all the way home to show his dad. And my grandfather, Dan Willy MacDonald, looked at my dad and said, “Well, it’s about time.”

Dad found the pitchfork about a quarter of a mile downstream from where he remembered spearing that salmon back in 1920. But there was no doubt about what it was: it was his pitchfork. He cleaned it up, coated it with lacquer and mounted it. When he died in 1976, my mother gave me the plaque and it hangs on a wall in my house today.

I used to love to tell that story to my daughter at Christmas when she was just wee and if this COVID thing ever leaves us, I’ll tell it to her kids. My only hope is that one day, when I’m gone, my children and grandchildren will think of me the same way I remember my dad.

Back at the beginning, I said he was a good man. I was wrong: he was great.

Norris McDonald is a retired Toronto Star editor who continues to write for Wheels under contract.