Driving every generation of the Audi RS 6

A Legend 20 years in the making.

Article was updated 8 days ago

Join the Conversation (0)
CALGARY, Alta. – There was a time, not long ago, when the Audi RS 6 was firmly in the category of forbidden fruit; yet another tantalizing performance car not sold in North America.

Happily, Audi AG put and end to that when it decided in 2019 that the fourth gen RS 6 would land on our shores. And that decision is paying off, as Canada is now a top-five global sales market for the RS 6 Avant, according to Audi.

The stark shift in strategy was on full display during a recent trip to Calgary to commemorate the RS 6’s 20-year anniversary, an event where I not only drove the current gen RS 6 Avant on winding two-lane roads through Alberta’s spectacular Rocky Mountain landscape, but its preceding three generations as well.

An improbable circumstance to be sure, given the older cars never made it to North America, but ours is not to ask why but to appreciate a bit of good fortune.

And so it was that I found myself piloting four generations of the RS 6 back-to-back over a day-and-a -half period in sunny southern Alberta, where four of the five cars I drove were right off the Audi Museum floor in Ingolstadt, Germany, complete with heritage stickers and very cool European license plates.

Organized below are basic specs for each car driven along with general impressions. The “C” designation is how Audi refers to each generation and the model year for each are in parentheses. All cars have Audi’s quattro all-wheel drive system.

The first RS 6 looks and feels like an anachronism in 2022, with its thinner, smaller construction, spartan interior and steering wheel bereft of any buttons, save for the horn. I can’t remember the last car I drove where the steering wheel is meant only for driving (and honking), but that’s the case here.

Despite its age, this C5 is still quite quick, with acceleration from the 4.2-litre twin-turbo V8 that is still quite robust despite being the least powerful in the group by a wide margin. One factor that makes the C5 feel faster is it’s the lightest car in the group by more than 100 kg (220 pounds). Driving this car, I’m reminded of how far automotive technology has advanced over the past two decades.

This 2004 C5 was leading edge for its time, and its still feels spry in 2022, despite not having loads of creature comforts and safety kit that every car comes packed with these days. Its soft-squared, cubist lines have aged well despite being almost 20 years old, and its absence of advanced tech makes if feel connected to the road. Also, this unit comes with a Nokia car phone (!), which raises its cool factor immensely. 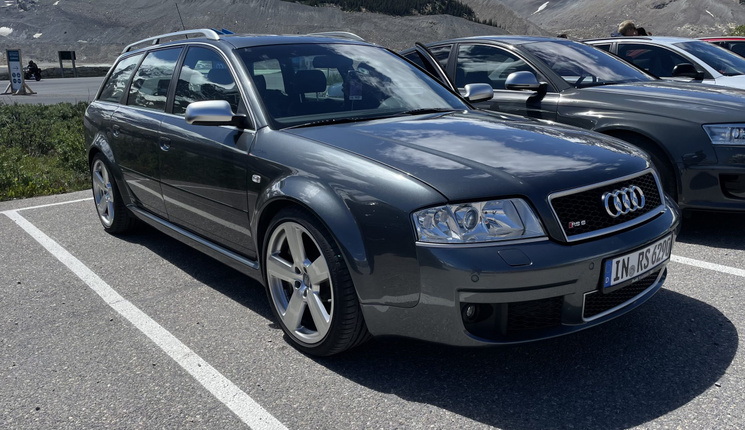 Both the 2008 Avant and 2010 sedan feature a 5.0-litre twin-turbo V10, an engine that Audi only ever used in the C6. Unlike the mid-mounted naturally aspirated 5.2-litre V10 found in the R8 and Lamborghini Huracan, this V10 is a very tight squeeze under the C6’s hood. It’s so tight in fact, that the coolant reservoir is only accessible through the front passenger door opening. Another C6 quirk is the separate engine start and stop buttons. The reason for this, according to Audi, is because the two functions could not be wired to the same button.

On the road, the twin-turbo V10 is incredibly responsive. At low speeds crawling through tourist traffic in Banff, the 2008 Avant feels ready to lunge with only the slightest throttle application. On the road, both are fast as the V10 delivers 479 lb-ft. of peak torque beginning at just 1,500 rpm. The exhaust is barky under acceleration in dynamic mode, less so in comfort. For much of my time driving these two, I didn’t notice the V10 resting under my right foot, as both cars are such comfortable cruisers.

Another aspect worth noting is the suspension tuning has a very wide variance between comfort and dynamic – quite soft and comfortable with the former and very firm with the latter. Between these two, there isn’t much to choose, although the Avant is a numbered “plus” model and just 500 were built. I like its burgundy leather interior too, although its optional buckets aren’t as comfortable as the standard seats in the sedan. 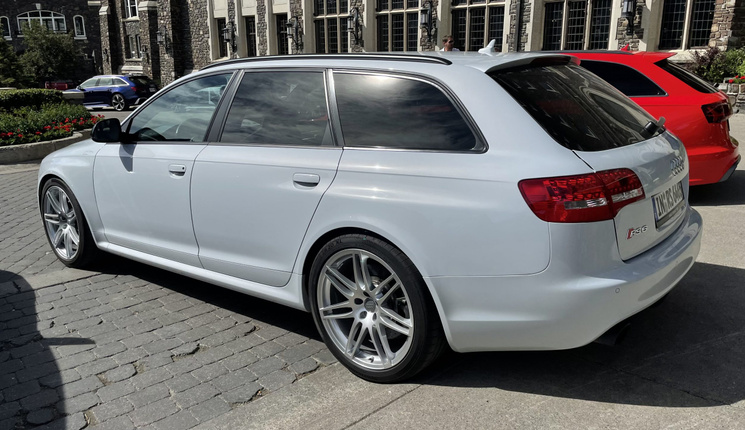 From its power-operated flip-out multimedia screen, to its analogue gauge cluster and mechanical console gear shifter, the C7 feels like Audi performance of the 2010s: sophisticated, but not too much. My Gen X brain loves this cabin. Minimal distractions, just get in and drive.

The C7 is fast, sure, but this car feels tethered to a different performance legacy. The one that existed before concern for carbon emission values and meeting tightening corporate fuel consumption standards was top of mind during development.

This RS 6 was the first sold as an Avant (wagon) only, and the last before the introduction of hybridization. Its V8 is only a tenth of a second slower than the C8, and it makes a furious racket under acceleration, something that is less prominent in its successor.

The twin-turbo V8 feels visceral in dynamic mode, but its also happy to trundle along as a highway cruiser in comfort. A snarly backfiring is there if you please, but also not if one is in search of a pleasant daily driver. 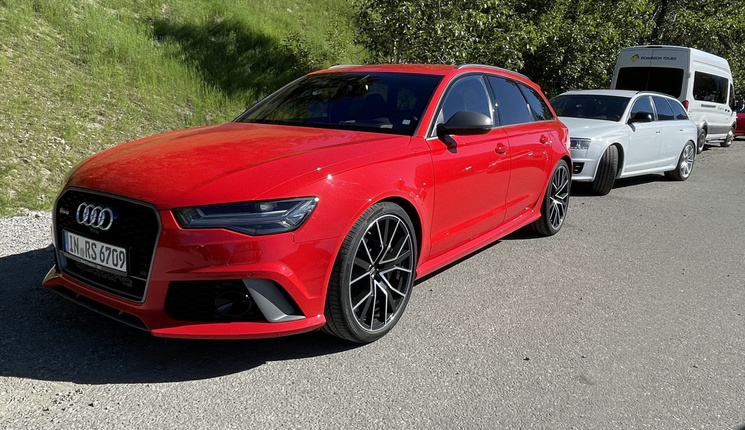 A pinnacle performance car, the C8 earns its RS badge with all the glittery technology Audi engineers can throw at it, from a near 600-hp V8 to its low-stance and bulging fenders housing 22-inch wheels to its Matrix LED light show.

The fastest of the bunch, with the shiniest interior and all the digital HD screens one can handle. Its sport seats grip the driver perfectly, its steering wheel RS Mode button applies the driver’s preferred performance settings with one press, and its twin-turbo mild hybrid V8 applies almost 600 lb-ft. of torque as soon as the accelerator brushes past 2,000 rpm.

Put simply, the C8 is a great tool for blurring scenery, and it has acres of room for people and their stuff to boot. Do I wish its driving character were a bit spicier? Yes. But, as Audi reps on the trip told me, the emphasis for the RS 6 is on all-around performance and everyday useability and not just being a track star. Take that, M5!

And yes, this car gets snarly in dynamic mode with its attendant sharper acceleration, off-throttle exhaust backfiring and weighty steering that all feels very much at home on two-lane roads, whether in the Canadian Rockies or elsewhere. 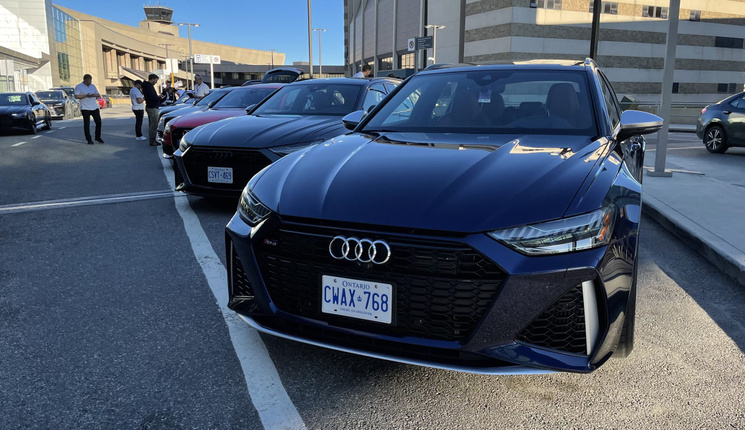 During this trip I came to realize that nothing puts a car into context quite like driving its ancestors in short succession on the same roads in the same weather conditions.

On that score, the drive delivered insight into the C8, in terms of the evolution of RS 6 design, performance and technology. Seeing the 20-year progression really answers the ‘how we got here’ aspect well, although driving the older cars makes me wish they had crossed the Atlantic, too.

But it is still great to get to know the family tree.