“Thanks to the generosity of race fans attending ‘Fan Friday’ and the Honda Canada Foundation’s matching of all funds collected, approximately $600,000 has been raised for Make-A-Wish Canada. Last year’s total was nearly $90,000, which I think is a record.”

Ever since it started, I have never quite figured out why the Honda Indy Toronto, which is approaching rapidly, has never promoted the Friday of the three-day racing extravaganza as “Free Friday.”

If the point of the exercise is to attract as many non-fans of IndyCar racing as possible to get a taste of the cars, drivers and competition without having to pay admission, then I think they should say so.

“Free Friday” gets the point across. “Fan Friday,” which is what the day is officially called, does not. In fact, what is “Fan Friday” anyway?

Now, I also know that what I want to call “Free Friday” really isn’t. It’s a day sponsored by the Ontario Honda Dealers to help raise money for Make-A-Wish Canada. This is a very good thing. Spectators are asked to make a donation to the Make-A-Wish campaign but, so far as I know, it is voluntary.

If it is not, then say that, too. Don’t beat around the bush. Is it “Free Friday?” or “Make-A-Wish Donation Day?”

In any event, to go along with Honda Canada’s recent sponsorship extension, the Honda Indy and its owner/operator, Green Savoree Racing Promotions, announced last week that its partnership with the Ontario Honda Dealers Association to support (wait for it) “Fan Friday” and the race festival at Exhibition Place will continue through 2020.

According to Jeff Atkinson, president of Honda Indy Toronto and vice-president, sales and marketing of the Firestone Grand Prix of St. Petersburg, the Mid-Ohio Sports Car Course and the Grand Prix of Portland (yes, he really does all of those jobs), the support of the Ontario Honda Dealers will enter its ninth year when this year’s festival takes place July 13-15.

Said Atkinson: “Thanks to the generosity of race fans attending ‘Fan Friday’ and the Honda Canada Foundation’s matching of all funds collected, approximately $600,000 has been raised for Make-A-Wish Canada. Last year’s total was nearly $90,000, which I think is a record.”

He added that Honda Indy is looking forward again this year to help push the contributions even higher.

Now, it’s not just on the Friday that race fans are asked to make a voluntary contribution. Donations are also accepted throughout the race weekend for a variety of games and activities, including Honda Canada’s Junior Red Riders off-road riding program.

Which reminds me: all kids 12 and under who are accompanied by a ticketed adult can receive free general admission all weekend.

That’s a good deal — as is the whole “Fan Friday” experience. I just get wound up about the “Free Friday” vis-a-vis “Fan Friday” labelling. I’ve always been a fan of what the late U.S. sportscaster Howard Cosell would call “telling it like it is.” I’m not sure that’s what’s been happening. 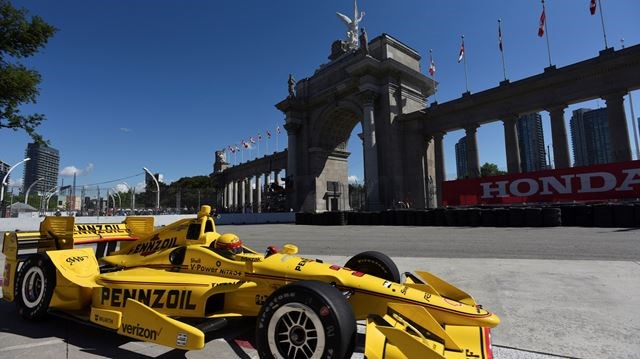