As a teenager way back in the Eighties, I was taught a thing or two about car ownership by my step-father. Among them were the standard activities of checking the oil, wiper blades and tire pressures, which in his eyes, needed to be done every time the gas tank was filled. Tedious for sure, but more often than not, it would catch a low oil level or soft tire.

In today’s world however, most of us just expect everything to work. We have gotten away from doing simple maintenance tasks, largely because so many things we use in daily life are designed to be thrown away when they have even the slightest failure.

Not only are cars not your average throwaway item, but something as simple as a flat tire can be life threatening.

The problem is compounded by the evolution of the style of tires used on today’s vehicles. Back in the day, so to speak, tire sidewalls were very tall, like big balloons and when the pressure was low in one tire, it was so visually evident that a car might not even sit level, and yet the car was still more or less driveable. With the low profile tires that even commuter cars wear these days, if a tire is visually flat, it is probably ready for the recycling yard.

So what difference does all of this make to you, the motorist? Is tire pressure really such a big deal? 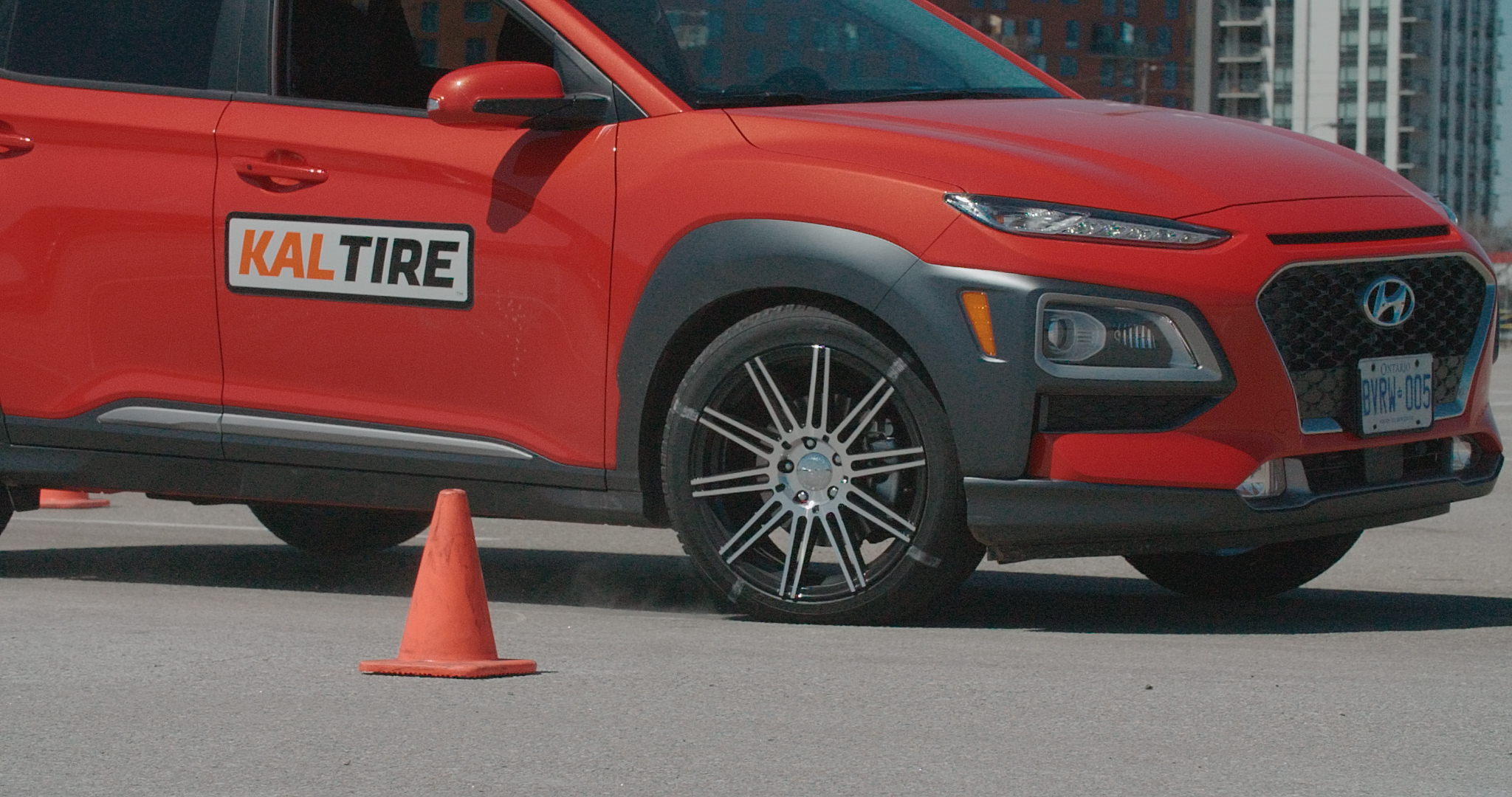 The concept was simple, take two identical cars, in this case, the new Hyundai Kona crossover, with identical tires but with different tire pressures. One vehicle had the tire pressures set to the correct 34 psi, while the other was set to 27 psi.

To showcase the difference, the event organizers had set up a large handling course which replicated some of the curves that motorists might experience while driving around a neighbourhood at speeds no higher than 40 km/h, along with a slalom and a quick switchback similar to what one might do in an emergency maneuver.

My first couple of tours around the course came at the wheel of the surprisingly nimble little Kona with the correct tire pressures. There was no drama, just the confidence one should expect from a properly maintained family car as I guided the car through the course.

Switching to the other vehicle, with insufficient tire pressure, driving instruction expert Jeff McKague, who was riding shotgun, urged me to approach the course at the same pace, about 40 km/h as I had in the previous vehicle.

7 fuel saving tips for your next road trip

The difference was immediately noticeable in what can best be called a squishy feeling. No longer did the Kona feel confident and nimble. Instead, it felt plodding and imprecise. It was like comparing a nimble and sporty powerboat to a luxury yacht. One turned as soon as it was asked, while the other felt like it took a moment to react before changing direction.

McKague explained that when a tire is operating at the designed pressure, the tread and sidewalls of the tire work together in tandem to grip the road and deal with the forces generated by acceleration, braking and turning. When pressures are lower than they are supposed to be, the whole package is able to flex and move more than they should, which creates a condition where the car becomes less than responsive.

The difference is more than just a seat of the pants situation however. In this cool video overlay, McKague drives the Kona through the same corner at exactly the same speed, with both cars. In the video, both vehicles are travelling 40 km/h, through the same curve. The car with the correct pressures hugs the curve tightly. Notice how the car on the right side of the overlay drifts over almost a meter off the driver’s intended path.

Now imagine if you were driving in your neighbourhood, at 40 km/h, and a kid ran out in front of you. You steered with the intention of placing the car in one place, but you missed it by a metre.

While it should be enough of a reason in itself, vehicle handling is not the only reason to keep tabs on your tire pressure.

Low tire pressures cause excessive heat build up in tire sidewalls, which is the primary contributor to tire blowouts. So much so that Transport Canada statistics show that a vehicle with tire pressures that are 25 per cent lower than specified is three times more likely to be involved in a crash.

The same statistics show that having pressures set too high are almost as bad, with vehicles having overinflated tires being twice as likely to be involved in a collision.

Longer Vehicle Life Expectancy a Testament to Research and Technology

For much the same reason, reduced tire pressures shorten the usable life of tires, causing uneven tire wear and deterioration of tire sidewalls.

And finally, as if all of this wasn’t enough, low tire pressures cause excessive rolling resistance, which causes the car’s engine to work harder. Naturally, this results in reduced fuel economy.

Kal Tire provides motorists with some handy tips in the graphics below, to allow them stay on top of their tire pressures. They include having an accurate tire pressure guage, checking your tires when they are cold, and filling tires right away when they need it. Also, there is nothing worse than needing your spare tire and discovering that it is flat too, so always be sure to check it along with the other tires. 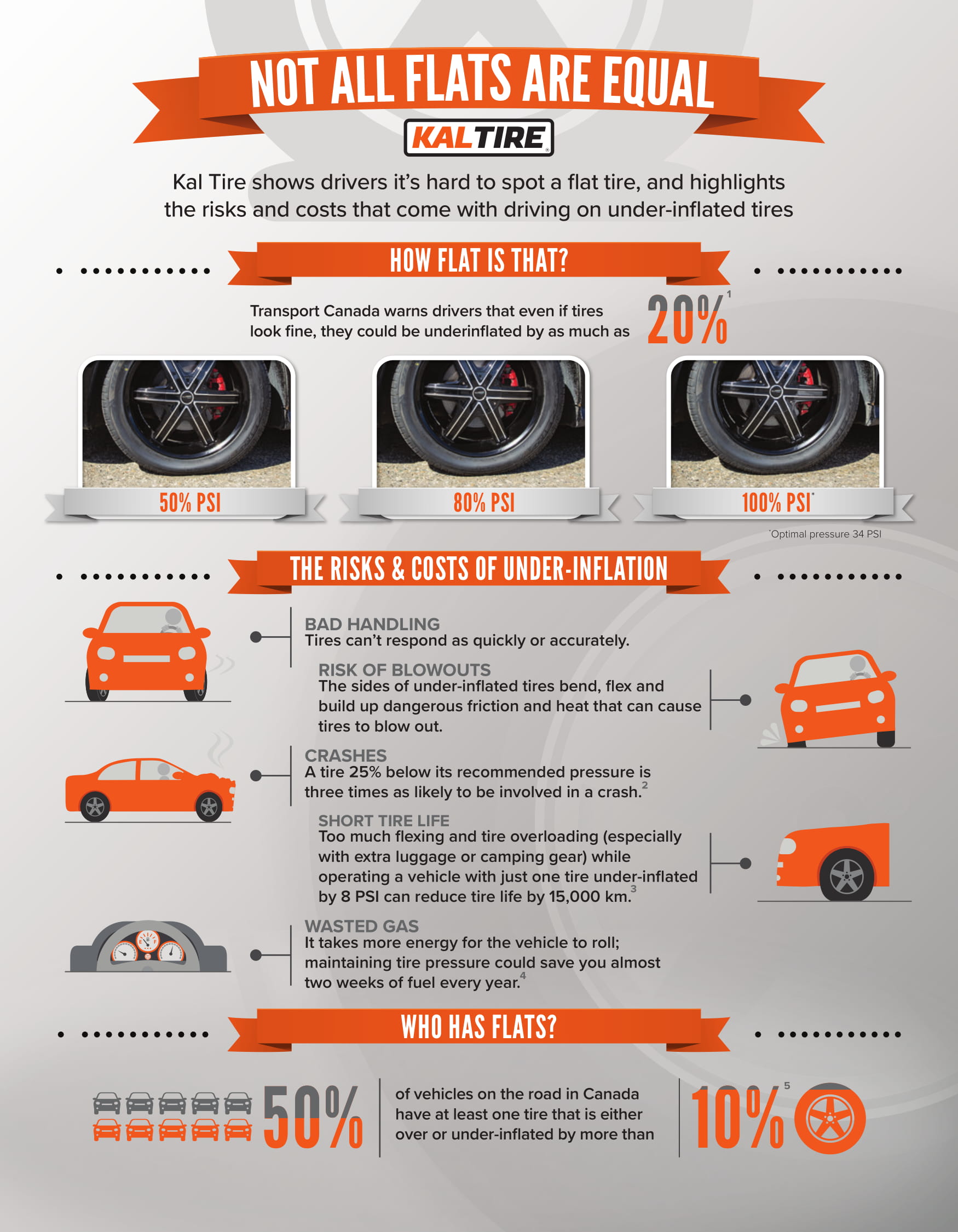 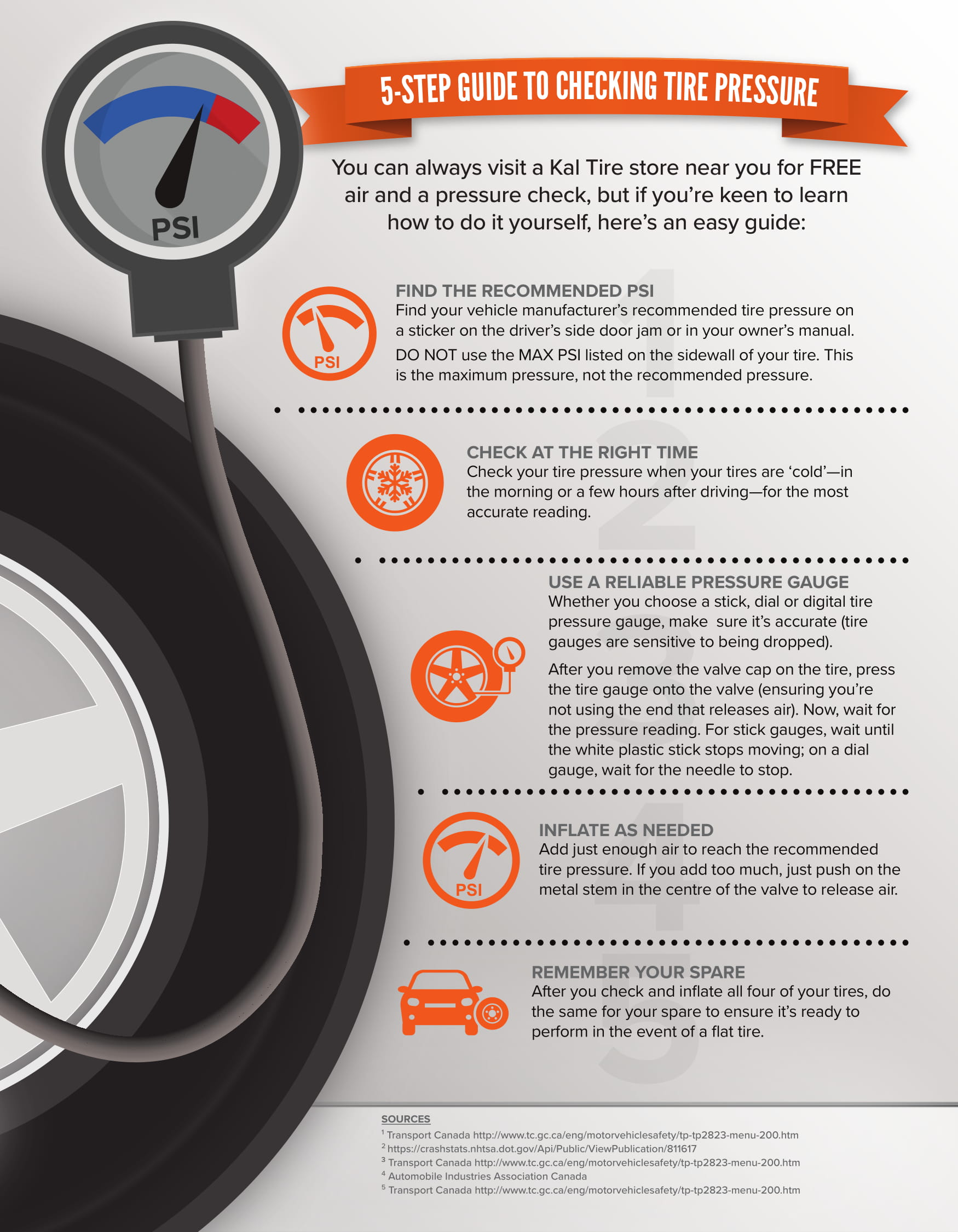