Detroit auto show 2016: the Battle of the Media Releases

Gentlemen, start your engines! The race is on, but the euphoria is simply declining.

As is now commonplace, General Motors jumped the gun on the second of two Detroit auto show media preview days Tuesday by issuing a press release overnight, and posting to its website, news of the all-new 2017 Acadia.

It was the second straight day that GM beat everybody else to the punch. The company that had its beginnings on a farm north of Oshawa and grew into the international behemoth it is today, grabbed the headlines Sunday night before the show even opened by trotting out its Buick Avista concept car.

GMC’s media conference to make the Acadia announcement was scheduled for 9 a.m. Tuesday, right after Lincoln’s 8:30 a.m. press conference to unveil the new and improved full-size flagship sedan Continental (which is, incidentally, a gorgeous car).

But in what has become the battle of the Internet to be first in just about everything, the Acadia – a crossover aimed at the heart of the midsize segment that also features advanced safety technologies – was the auto show topic featured on Detroit’s TV morning shows and newspaper websites.

Lincoln had sent out a press release in advance of the launch as well but it didn’t seem to attract the attention that the GM announcement did.

Continuing a trend started by the 2015 Ford F-150, in which the use of aluminum instead of steel resulted in serious eight reduction and increased fuel mileage, the new Acadia is 318 kilograms (700 pounds) lighter than the current model, which pays dividends at the gas pump. A new, 2.5L engine is standard, offering an estimated 8.4 L/100km on the highway for FWD models; city fuel consumption offered is GM-estimated at 10.7 L/100km (FWD) and is bolstered by GMC’s first application of Stop/Start technology.

Meanwhile, Kumar Galhotra, president of Lincoln, said: “The Continental name has long been associated with the ultimate in Lincoln beauty and luxury. With the all-new model, we are focusing on creating more human, personally tailored experiences for our clients – providing what we call quiet luxury.”

Besides Lincoln and GM, Acura and Nissan were the only other major manufacturer planning debuts Tuesday. The remainder of the day would feature announcements by fuel and tire companies (Shell, Michelin) and other suppliers. 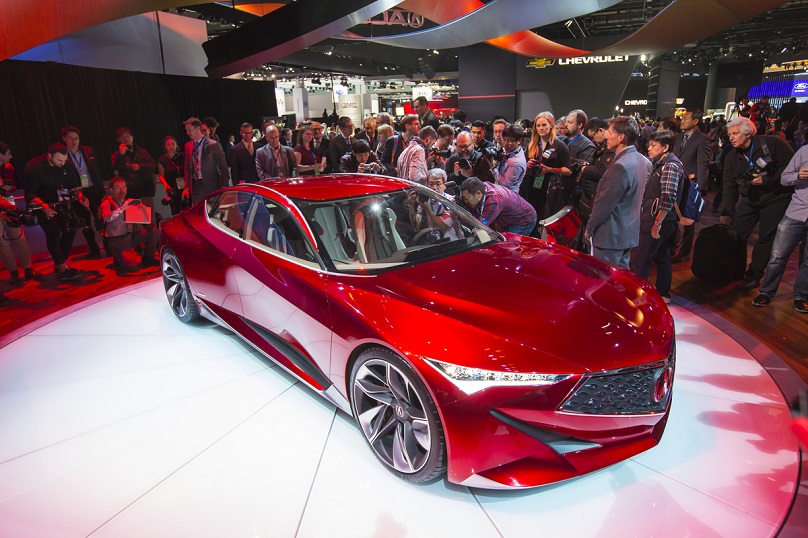 Monday, meantime, was a day of surprises and celebration at the auto show, which opens to the public next weekend.

“It’s one thing for a car to drive itself in perfect weather,” said Jim McBride, Ford technical leader for autonomous vehicles. “It’s quite another to do so when the car’s sensors can’t see the road.”

Ford’s winter weather testing is taking place at the University of Michigan in Ann Arbor.

The other surprise was the unveiling by Fiat Chrysler Automobiles of the new minivan to be built in Windsor, Ont., as the result of a $2-billion investment by FCA and governments.

The 2017 Chrysler Pacifica minivan and Pacifica Hybrid minivan will replace the Dodge Grand Caravan. It will have the most room in the segment – it has seating for eight passengers – but the Hybrid model won’t have the complete stow-and-go feature that was a hit with previous incarnations because the batteries will be stored underneath the second row of seats.

Reid Bigland, president of FCA Canada, told the Star in an interview, however, that owners will have the option of removing the second row to increase storage space.

Earlier, there was celebrating after the Honda Civic was named the 2016 North American Car of the Year and the Volvo XC90 was named Truck/Utility Vehicle of the Year.

The Civic defeated the Chevrolet Malibu and the Mazda MX5-Miata while the Volvo outdistanced the Honda Pilot and the Nissan Titan XD in voting conducted by an international jury of motoring correspondents, including Toronto Star Wheels’ Jim Kenzie.

While the Titan was the only true “truck” in the Truck/Utility Vehicle category – the other two were large SUVs – the rules state there must be significant changes to a vehicle for it to be eligible for consideration and so best-sellers like the Dodge RAM and the Ford F-150 were not in the running this time around.

The Canadian Car of the Year and Truck/Utility Vehicle will be announced the day before the Canadian International Auto Show in Toronto opens to the public in mid-February. 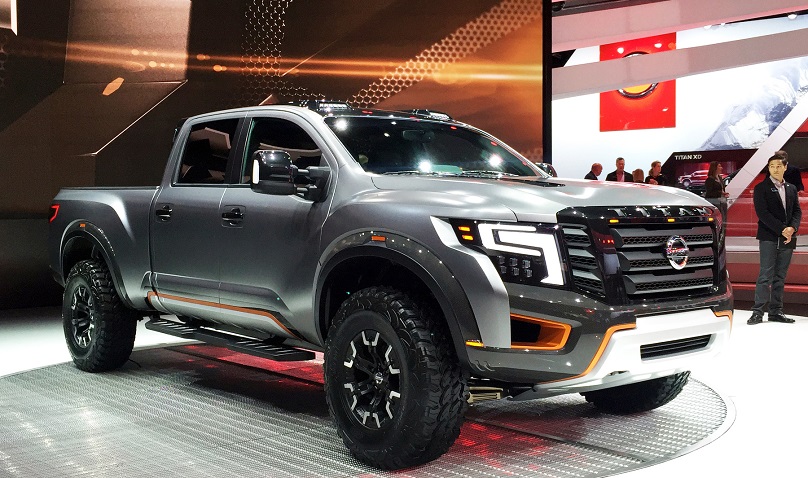 The preview days kicked off after the car/truck announcements. All the major manufacturers planned announcements either Monday or Tuesday, making Detroit the most important of the car shows because automakers use it as a coming-out party for their latest creations.

But there’s been a noticeable lack of “buzz” sp far this year and while some suggested that last week’s CES technology show in Las Vegas might have taken some of the shine off Detroit, one Canadian automaker president put it down simply to the thrill being either gone or declining.

“If you remember 2008-2009, when the industry was in the doldrums,” said Jerry Chenkin, president of Honda Canada, “it was really dreary in here (Detroit’s Cobo Hall, site of the annual show).

“But then the industry came back and has been on a high for a number of years now, with new sales records pretty much across the board. I suggest the euphoria is simply declining.”

As mentioned, GM stole an early March Sunday night by unveiling the Buick Avista concept car, which is spectacular to look at. But journalists wondered about the launch because the company has no plans to actually build the car. 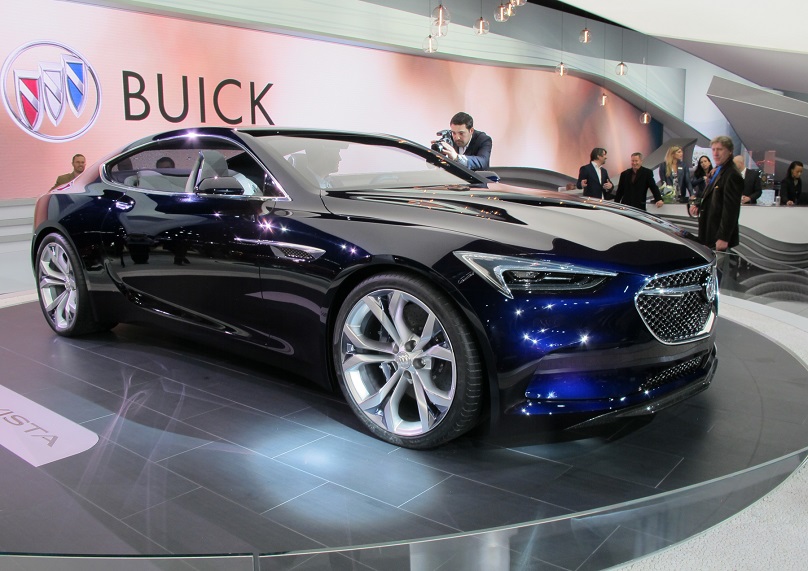 On the other hand, Mercedes-Benz launched its next-generation E Class car Sunday night and besides illustrating how truly smart the latest car is, the presentation featured a lecture on artificial intelligence by an MIT professor who assured those in the audience, including NASCAR and IndyCar team owner Roger Penske, that despite all the advances, technology is nowhere close to outsmarting humans.

Other news and developments of note:

– U.S. President Barrack Obama will visit the show on Jan. 20 – the first time a president has attended since Bill Clinton occupied the Oval Office.

– General Motors announced the 2017 Bolt EV will go an estimated 320 kilometres before needing a charge and, while using an optional fast-charging system, can be charged up to 145 kilometres of range in 30 minutes, although outside temperatures may affect charging times.

In an interview with the Star, GM Canada President Stephen Carlisle paid tribute to the Ontario government for its recent announcement of a network of charging stations in the province.

– Not content to rest on its laurels with the success of the Titan XD, Nissan unveiled the Titan Warrior Concept. They took a desert-racing truck design and put it on a commercial-duty chassis with modified off-road suspension. “Truck buyers have a seemingly insatiable appetite for more content and more unique offerings,” said José Muñoz, executive vice president, Nissan Motor Co., Ltd. and chairman, Nissan North America, Inc. “We are already exploring new territory.”

– Ford unveiled its latest F-150 Raptor. The SuperCrew version adds room for passengers and gear. Ford also unveiled its most technology-packed Fusion to date, including hybrid and plug-in hybrid versions of the new sedan.