Designers draw on Lincoln’s past to shape the future

Meet the man behind the new Continentals “quiet luxury”

Kemal Curic just took on visual responsibility for the entire Lincoln product line, including its recently-resurrected and most iconic nameplate, the Continental.

Born in Sarajevo and raised in Germany, Curic earned a degree in industrial design in 2003. He was snapped up by Ford’s European arm shortly afterward.

He worked on much of Ford’s sedan lineup — Fiesta, Focus, Fusion and a number of concept cars — before moving to the United States in 2010 to lead exterior design on the latest Mustang, an opportunity he says was a designer’s dream.

His focus now shifts to the luxury side of the business in his new role as Chief Exterior Designer for Lincoln, and he does so at a pivotal time as the brand seeks to reposition and bolster itself as a major player in the segment.

Curic fully understands the gravity of what he’s taken on.

“I did follow this car because as you can imagine the Continental name is almost equal to Mustang as a nameplate,” he says during an interview on the eve of the 2016 Canadian International Auto Show.

“It’s such a strong name. Three things come to your mind with the Continental name. You think about presidents, limos, and Hollywood.”

Although the design team dug deep into more than 75 years of the badge’s history in search of inspiration, they also made an effort not to be bogged down by the past when designing a model so integral to the brand’s future.

“We did look at the original Continental, but it’s more about the spirit,” Curic says. “Everything goes back to the original roots of the Continental. It’s about the gesture of the car, the long, flowing lines, the low back end.” 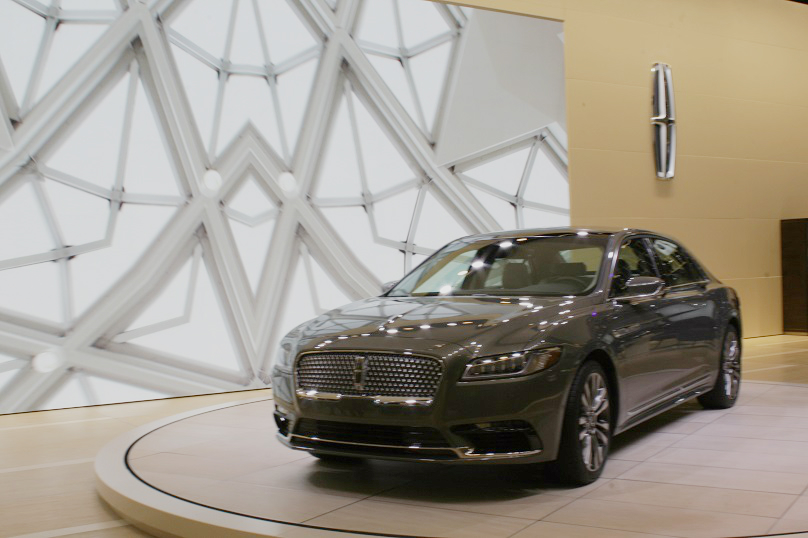 Several style statements have been made with the new Continental that Curic is now tasked with implementing throughout Lincoln’s lineup. Chief among them is the updated grille, which he points to as being the esthetic future of Lincoln.

“You recognize in the side view how upright the nose is,” he explains. “I think that showcases how confident the car is.”

That confidence carries through to the headlamps, which Curic describes as jewelry-like. The lights repeat the esthetic of the grille with smooth yet assertive lines.

“It has beautiful eyes,” he says. “They are meant to seduce. I think the car does a wonderful job of seducing a person. It has its own personality. It’s very elegant.”

Another striking element, one that’s less likely to find its way through the rest of the Lincoln lineup, is the distinct door handle design.

“The coolest feature is actually moving the door handles from the body side where you expect them to be, on to the beltline and integrating them, which allowed the design team to clean up the entire body side and create these long, elegant, beautiful lines,” Curic says.

Those lines and curves require some deep stamping techniques to achieve in production.

“It is challenging, but the team did a fantastic job of some of the precision,” he explains. “On the C-pillar you can see this wonderful detail. It’s all about the light reflections.

“Every time you see the car in a different lighting environment, it’s almost like a moving sculpture.”

Lincoln calls the ethos of the new Continental “quiet luxury,” which is a theme that carries through not only the refined and quiet interior but the soft-closing doors, the 30-way adjustable front seats with individual leg support and massage functions, and the high-end Revel sound system.

“It’s so much detail that you discover more and more as you walk up to the car, from stitching to material choice to the wood,” Curic says. “It’s almost like creating a bespoke suit, I would say. Every single detail gives you this ultra luxury experience.”

“It’s not the loudest one on the block, but it’s the most beautiful.”

Freelance writer Stephanie Wallcraft is a regular contributor to Toronto Star Wheels. To each her, please email wheels@thestar.ca and put her name in the subject line.