Where many urban planners are seeing the social benefits that lay dormant within these spaces others focus on the environmental impact of the common parking lot.

Join the Conversation (0)
A 44-unit apartment building in downtown Wichita that once held 500 cars, a 25,000 square-foot community garden in the center of Seattle and a vibrant social space in Toronto’s downtown core featuring food stands, a bike repair station and a farmer’s market.
Once limited to the boundaries of uninspiring concrete, urban planners and communities across the globe are reimagining the ways in which parking lots and spaces might better serve the environment, the city and the needs of the citizens that surround them.
“Traditional parking lot design exhibits a very single-minded use of our precious land, especially in cities like Toronto,” said Ryan Lo of Urban Minds, a non-profit organization which aims to create meaningful ways for youth to shape equitable and sustainable cities.
“The transportation needs of Torontonians are diverse and will continue to change,” he said. “That means that these spaces, which take up a disproportionate amount of the geography in our city, are not sustainable and could be better used for land, parks and human-minded purposes.” 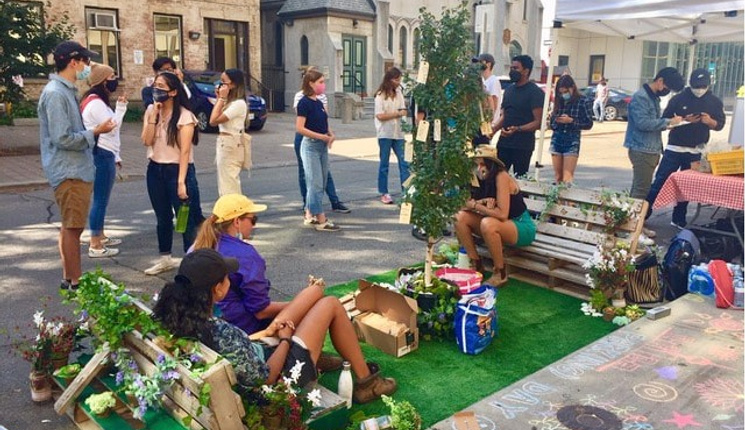 To bring awareness to this topic, Urban Minds recently paired with students from Toronto Metropolitan University’s School of Urban and Regional Planning to transform a selection of parking spaces on Bond Street into a mini park.
“The main ideas that came forward for redesign were related to seating, greening and food,” said Lo of the project, Brake at Bond, which tasked students with reimagining the long-established space. “We were able to obtain some lawn chairs and wooden crates, we added a small repair station with pumps and equipment for bike repair and even included a welcome tree which asked visitors to come and write down encouraging messages to share with others.”
Where many urban planners are seeing the social benefits that lay dormant within these spaces — Jane/Finch Community Centre, for example, are approaching their second year of transforming the parking lot of Jane Finch Mall into a community hub — others are taking a sharper focus on the environmental impact of the common parking lot.
One such individual is Eran Ben-Joseph, a city planner, urban designer and professor of landscape architecture and planning at the Massachusetts Institute of Technology, whose book, “ReThinking a Lot: The Design and Culture of Parking,” has just hit its 10-year anniversary of publication. 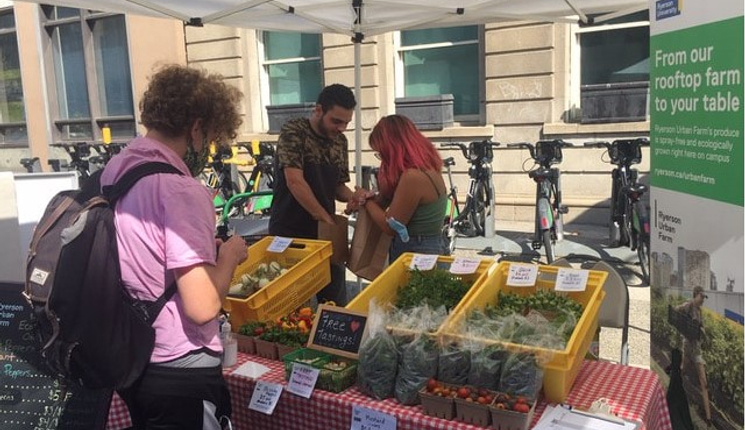 “Unfortunately, with respect to the design and management of open surface parking lots, not much has changed at all since the book was published,” said Ben-Joseph, who has long-since pointed to the contribution of these spaces to climate change.
“On average a parking garage requires three to six times more square feet than the actual dimension of a car to accommodate drive aisles, ramps and standard parking space dimensions,” he said, adding that the traditionally impervious surfaces of these sprawling structures result in a heat island effect as well as flooding and drainage issues.
Ben-Joseph points to ways in which urban centres can hope to mitigate the environmental impact of parking lots by reutilizing the spacing for such purposes as storm mitigation and solar energy production.
He said that while the design of emerging lots has not shifted much in the last ten years, he is heartened to have observed a change in the way that existing spaces are being transformed.
“In the United States, organizations such as the International Parking Institute and real estate developers are partnering with cities to design and develop garages for more than just parking,” he said. “The ground floor use of parking garages is increasingly being used for retail and recreations and top floors are used for storage, and, in some cases, even housing.”
Similarly in Canada, Orit Sarfaty, urban planner and chief program officer of Evergreen, an urban charity that aims to create spaces with environmental, social and economic benefits – and operates Toronto’s Evergreen Brick Works – points to Granville Island in Vancouver as an inspiring example of existing parking lot reimagination.
“A parking lot’s carbon emissions are way too high when you consider how limited its use is,” said Sarfaty, whose organization focuses on sustainability in Canada’s cities. “Granville Island intersperses its parking across its site where people and cars together meander around shops in a natural organic way.”
Sarfaty points to other examples including a Tennessee parking lot that supports a massive climbing wall to give it more purpose and allow climbers truly show off their skills.
“How we design any space plays a major role in how a city or community will, or will not, adapt to climate change,” she said. “This is an approach we take when we’re transforming schoolgrounds as part of our Climate Ready Schools program, and at Toronto’s Evergreen Brick Works.
“Parking lots with semi-permeable surfaces is one of the many design features that we have employed on site to build climate resilience.”
Sarfaty said that like it or not, cars in some shape or form are here to stay, and so are parking lots. As such, she said, it’s important to ask: “if these structures are here to stay, can we make them work harder for the carbon they’re already emitting?
“Night markets and temporary basketball courts are great examples of fully optimizing existing lots,” she said. “Small business entrepreneurs lack space to get their business off the ground. Can parking lots double as artisan markets during off hours?”
“Parking lots don’t have to be the precursor to an attraction; they can be part of it.”