COVID-19 the Catalyst for Oshawa Trucks

This year, 2020, was dreadful. COVID-19 brought the world to its knees and only the arrival of vaccines brought a smile to faces.

But, believe it or not, there was a bright side to COVID. Because people had to stay home, they had to make their own fun. They had to restrict their weekend getaways to nearby beach areas or provincial parks where the kids could swim and mom and dad could have a beer while sitting outside their own tent or trailer, socially distanced from their neighbours, of course. Or unload their four-wheel ATVs from the trailer and tear off down the trails.

And in order to take the tent or haul those trailers around Ontario, people went out and bought pickup trucks and that is why, in a strange sort of way, General Motors is gearing up to build trucks again in Oshawa and it’s all – or, at least, partially – because of COVID.

So says Scott Bell, GM Canada’s president and managing director. I’d called him up to ask why his boss, GM CEO Mary Barra, had said the company was committed to the electrical revolution and yet GM Canada was retooling Oshawa to build internal-combustion powered trucks.

“This goes back a few years,” he said over the phone. “We were winding down the truck production (at Oshawa) but we weren’t sure where the industry was going.  There had been really good response in the marketplace for the Silverado and the GMC Sierra and the truck business continued to be a bigger part of the industry.

“Although that trend was out there, to some extent, it accelerated significantly during COVID, which I think was somewhat surprising.”

Bell said the coronavirus had hit hardest in the areas of travel and entertainment and that people were taking the solution into their own hands.

“All of a sudden, you couldn’t buy campers, boats or four-wheelers. They were all sold out. People needed trucks to drag ‘em all around the countryside. It’s interesting that people have settled in (and said) I’m going to take charge of my ability to travel and trucks are playing a big role in that.”

Bell said that, contrary to popular belief (I’d suggested that GM was planning to mothball the place), the company had always wanted to keep Oshawa going and were actively looking for a reason to keep it open.

“We always wanted Oshawa to continue,” he said. “We were always looking for things. The parts business we put in there is starting to gain momentum, so that business isn’t going to go away and we’re looking for opportunities to grow it. And we were making face masks for the fight against COVID.

“Those two operations kept us working on what we could do next and when the truck business got a burst of momentum, we saw an opportunity and took it. It’s a big win for us. We’ve done some things creatively to keep some manufacturing there but it was putting parts together from other facilities. Now we have the flexibility to build the models that we want and that the consumer is going to demand. It puts Oshawa in a position to be a strong contributor to our company for years to come.” 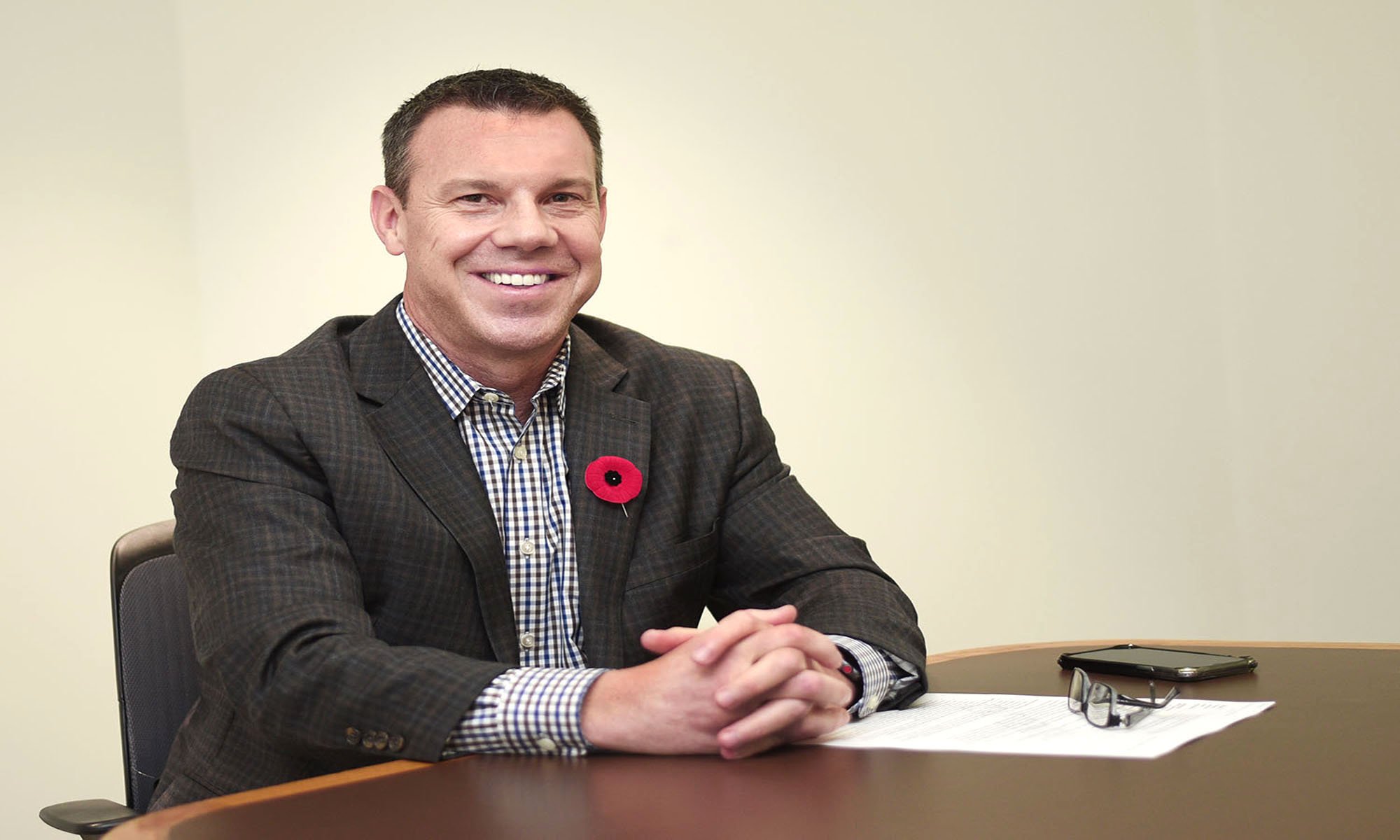 NM: Are you hiring yet?

SB: We have, (but) there are all sorts of things you have to do to a plant before you have your permanent employees in there. We have folks on the ground today, as we speak. The hourly line workers will be hired but not for awhile but we hope to do it sooner than later. We want trucks coming out of that plant in early 2022 so we have to get people up and trained in 2021.

Meantime, we couldn’t be happier to be at this stage. If you go past the plant, you’ll see there’s a lot of activity there. We’re on a mission there. The jobs are real, the impact on the economy is real and it’s happening as we speak.

SB: The trucks will be internal-combustion engine trucks. (NM: Mary Barra says electrification is the future.)  It’s (electricity) on top of everyone’s mind. Our commitment to an all-electric future is real.  Mary’s talking about 30 new EVs by 2025 and we’ve committed to our own battery capability (that) will give us the capability to build an EV for everyone and that includes everything from crossovers to trucks and we’ve demonstrated with the Hummer we’ve announced that you can do a lot with electrification. All things being said, not everybody is going to flip to the EV tomorrow.

Trucks are very profitable; I don’t think that’s any secret. They are one of the biggest segments in Canada and across North America and we have to take advantage of that. That’s what we’re doing in Oshawa and that will pay some bills. When things start to accelerate and we get into going electric faster, we’ll be looking for more EV capability and capacity and we’ll be there with our hands up and ready to go.

NM: What else do you have going on?

SB: We’re up to an 800-member engineering and software development team between Markham and Oshawa. They are working on all the technology that will be going into our electrified autonomous vehicles down the road. It’s the largest software development automotive team in the country. It’s the second largest in our company. When we committed $170 million to Oshawa, part of that was to build this new test track at the south end of our 65-acre property. It’s paved and ready to go and we’ve had a few cars on it. Weather permitting; we’ll be testing vehicles soon. We’ve got cold-weather testing in Kapuskasing, we’ve built partnerships with universities – we’ve been investing in that for many years. Canada is playing a very significant role at the core of this vision to make electrification come true. It’s happening and Canada is playing a massive role. We’re making electrification come to life in Canada.

NM: Will the track be used to test autonomous vehicles?

SB: We’re working on autonomous driving today. Our Super Cruise hands-free driving program is on the new Cadillac Escalade and CT6 and will be on the Bolt. That’s an autonomous Level 1 and 2 and those engineers and software development people are working on that in our engineering centres here in Canada. They used to pack up all their goods and drag it all to Michigan or some other facility and test it; this track now allows us to be much more efficient. Our company will automatically feed more here because of that track.  We’ve done a good job in California but now we’re going to need to (move programs) to a more winter environment and test here. And focus on what is going to be necessary to make it work in Canada and other climates like it.

NM: What do you have to do to convince Ontario motorists to go electric?

SB: If you really want to change the world, a company has got to go all in.  Here are the numbers: 97 per cent of cars in Canada are internal combustion, 3 per cent are EV. In the U.S., it’s 2 per cent. Canadians are more likely to get there quicker than the U.S. With that being said, there has to be a lot of education about these things. I drove a Bolt EV for three months and I did it intentionally. I wanted to put the pressure n myself to drive from Toronto to Detroit. You learn quickly that there’s an app on your phone that connects to the car that tells you the range, when you’ll need to charge, where that charger’s located and how long you have to sit on that charger to get you to your final destination.

The other thing is that there’s this notion that there’s a charger on every corner because you might need a charger. The reality is that nobody uses their cellphone and drains the battery till it’s dead and fills it back up again. Cars today, we drive ‘em till they’re empty and we fill ‘em up. With an EV, you plug it in at night. You plug it in at work or when you‘re at home. They’re cleaner (you’re doing the right thing for the environment), they’re quieter, they’re quicker; they have few moving parts, you don’t have to change the oil. If you talk about the benefits of owning one, it becomes pretty obvious pretty quick.

So it’s getting that word out if we really want to make a difference. You need a company like GM to back it up with product that’s for everybody, at a cost that’s in line with where we are today.

By Norris McDonald Special to wheels.ca