The 18-year-old from Vancouver clinched the Cooper Tires USF2000 Championship title with a podium finish in the first of two races held during the season finale weekend in Houston, Texas.

“I can’t believe it,” Hargrove said during the post-race celebration. “I started this year with Cape Motorsports with Wayne Taylor Racing not knowing what we were going to do — I just knew they were the team to be with — and what it turned into is beyond my wildest imagination.”

The story of Hargrove’s year was one of remarkable maturity and consistency. He posted four wins overall, which was actually two less than his teammate, American racer Neil Alberico, but he bolstered those with four poles and five podium finishes (four seconds and a third) over a 14-race season that was, at times, contested by more than 30 entrants.

The cool-headedness that defined Hargrove’s year carried through to the deciding race.

He was leading when he was challenged aggressively by Alberico, who was still in the title fight.

Rather than be forced into a mistake, Hargrove let Alberico make a clean pass knowing that a podium finish would be enough for him to take the title.

“When the yellow came out, I knew I was in trouble because I knew Neil wants to win,” Hargrove said.

“He got aggressive on the restart and got the job done and, by that point, I was thinking championship.

“We were side by side. I blocked and took him as deep as I was willing to without putting myself at risk. He broke a little bit deeper than me, and that was that. He was ahead of me by the apex and it was his. And then Henrik (Furuseth, who finished in second place) got by me, just by me driving carefully to the finish line.”

It was lucky that Hargrove clinched the title early. In the rain-soaked second race of the Houston weekend, he spun on lap three and posted a season-low finish of 21st. Had he not already buttoned down the title, it could have been disaster.

Instead, Hargrove is now positioned to climb the ladder to the second rung in the Mazda Road to Indy: the Pro Mazda Championship. The $383,700 (US) cheque he collected in championship prize money will go a long way toward securing a place at the next level. 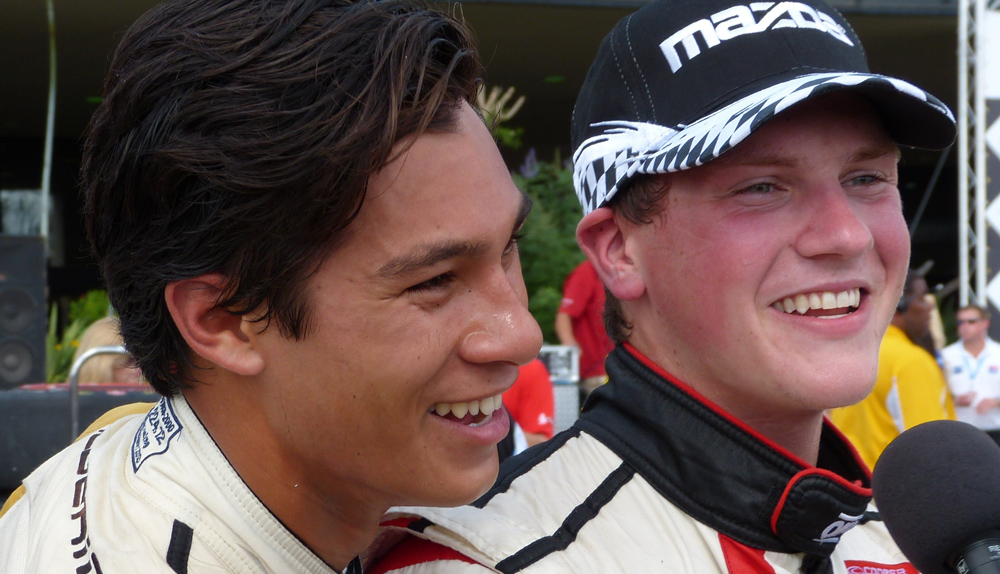 When Hargrove reached the top of his game in the Vancouver karting scene, he found he hit a ceiling and started to look for opportunities to further his racing career south of the border.

His progression into the Mazda Road to Indy was a natural one, but it came about largely by chance.

“There’s no real, clear path for a Canadian to take,” he said.

“So that’s why I turned to the system that’s working right now in the U.S., the Mazda Road to Indy. I won a Skip Barber scholarship back at the end of 2010, which put me on course to join the Road to Indy from the natural progression from Skip Barber to USF2000.

“I’m just thrilled that Mazda’s put together this whole program that we can be part of, and to win it really means a lot to me.”

Should Hargrove find success in Pro Mazda over the next couple of years, the Road to Indy system is designed to let him to continue to the Indy Lights series and, eventually, the top-level IndyCar Series.

But Hargrove has one more event to attend first. He was one of this year’s recipients of the Team Canada Scholarship and will represent Canada next weekend at the prestigious Formula Ford Festival at Brands Hatch in England, which attracts the brightest young kart and single-seat racers from around the world.

“It’s quite an honour to know that I’m going to England to represent Canada,” he said.

“I’ve grown up in Canada, I’ve lived my whole life in Vancouver, and it’s definitely a place that I want to represent when I go overseas.”

As Hargrove follows in the steps of past Canadian champions, he demonstrates a characteristic consistent among many: an understated but effusive patriotic pride.

In addition to Scott Hargrove, several other Canadian racers contested the 2013 USF2000 Championship. Below are their reflections on the past year and hopes for the future.

Garett Grist, Grimsby (finished 3rd in points): “This season’s been great. We go into the last race leading the rookie championship, so hopefully we can end the day like that and it will be a fantastic first year.” (By the end of the weekend, Grist had clinched the rookie title.) On his future: “We’re 100-per-cent back with Andretti Autosport next year. I can’t say at what level, but we have some good stuff planned and in the works.”

Stefan Rzadzinski, Edmonton (14th): “We started off really well and had a podium early on, but got caught up in a few incidents midway through the season. It was frustrating not to be able to finish it off (He missed Laguna Seca and Houston due to budget constraints), but I really enjoyed racing against some of the top young racing talent from around the world.” On his future: “At this point, I don’t have 100-per-cent certainty in my future. I’m working hard to put things together for 2014 and beyond. I’m optimistic I will land somewhere in a race seat next season.”

Daniel Burkett, Winnipeg (15th): “My season has been exploratory. It’s my rookie season, so it’s the first season that we’re just getting into it. Next season, I’m going for the championship.”

On his future: “I’m definitely going to be in motorsports somehow, even if I’m not a driver. I’m going to business school right now, so it’s definitely looking bright.”

Dalton Kellett, Toronto (16th): “I’d say, all in all, it’s been a pretty good season. There’s been a few ups and downs. I’ve had some decent results and a few races where things haven’t gone according to plan.” On his future: “Right now, we’re considering either Pro Mazda or Indy Lights — definitely going down the Mazda Road to Indy, but we have to look at sponsors and teams for next year to see what we’re going to decide on.”

Ryan Verra, Calgary (2nd in National Class): “The season’s been a great experience for me, to get out here with really good drivers and learn from them. A few hits and misses, ups and downs. It’s been amazing.” On his future: “I’d like to continue with the Mazda Road to Indy as far as I can get, and keep on learning, keep getting faster. I love being in the car — it’s all I think about when I’m not in the car — so I guess I’m hooked for life.”

James Dayson, Vancouver (3rd in National Class): “I was very happy with this past season, my first full season since starting in racing two years ago. My progress was awesome. Despite falling short and not getting wins, I was competitive and learned a great deal.” On his future: “Next season, I’m looking to return to USF2000 and compete in the Championship Class. I’m also exploring an opportunity to race in the Rolex 24 Hours of Daytona.”

Jesse Lazare, Montreal: Ended his association with the Pabst Racing team but has gone on to claim the Can-Am Cup in the Toyo Tires FF1600 championship.