Unbeknownst to many visitors to the Canadian International Autoshow, there are a range of events which happen in the days leading up to the show each year. They range from small, manufacturer hosted parties for automotive media to a massive industry VIP party the night before the show opens. The highlight pre-show event this year was an elegant black tie affair held in the Art of the Automobile display.

The occasion was the first ever induction of no fewer than ten motorsport journalists into the Canadian Motorsport Hall of Fame(CMHF).

The special ceremony was the first in a new alignment which will see the CMHF’s annual inductions become part of the Autoshow festivities rather than being a stand-alone event in the Fall.

In addition to the inductions, the bill included car collecting guru Craig Jackson of the Barrett-Jackson classic car auction and auto racing legend Mario Andretti. The emcee for the evening was racer and television commentator Townsend Bell. 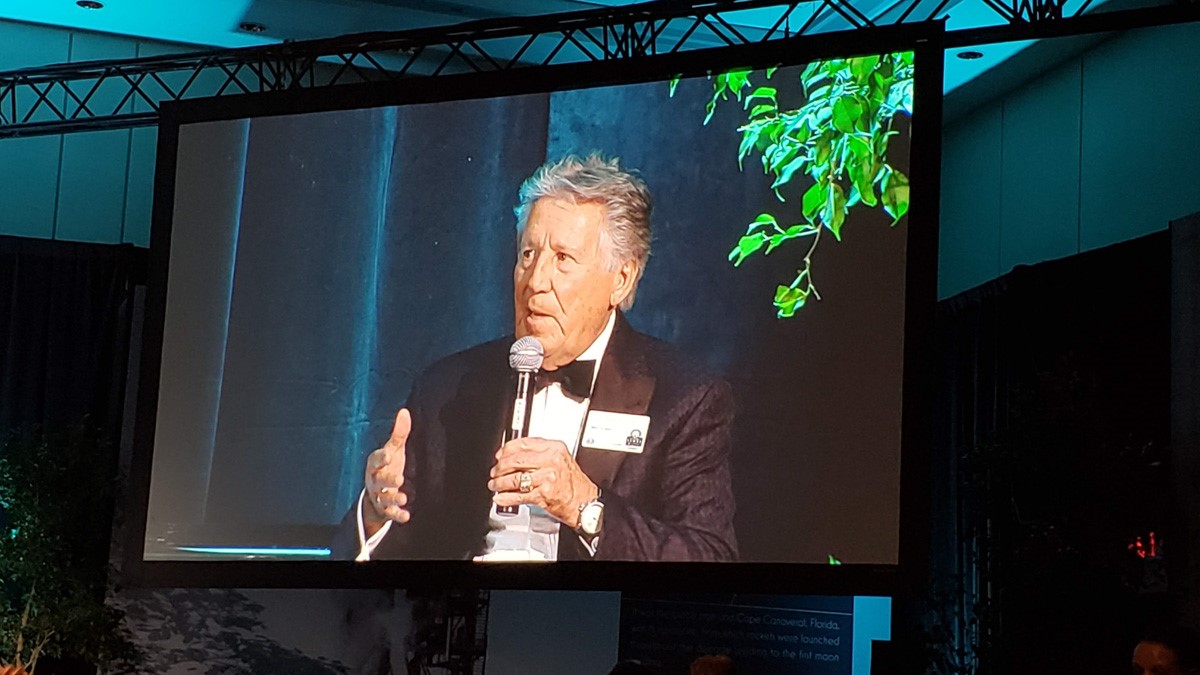 Trussed up into a rented tuxedo like a Sunday roast, I arrived at the pre-event reception to find the room buzzing. Toronto was experiencing a bit of winter weather, which meant that the flight pattern at Lester B Pearson International Airport was full. That meant that there was a private jet idling on the tarmac in Allentown, Pennsylvania, containing the 1978 Formula 1 World Champion. There was a very real concern that Andretti might not make it.

It was about this time that a guest at the event confused me with Racing Point F1 team principal Otmar Szafnauer. He was so convinced that I look like Szafnauer that he brought me over and introduced us. It was kinda weird, as we look nothing alike.

To kick off the evening, CMHF Chairman, Dr. Hugh Skully, who himself is an inductee for his important work with the safety and medical side of motorsport, announced the inductees.

Len Coates – A sports journalist since the Sixties, Coates went on to become the Toronto Star Wheels racing columnist and played a large role in the PR side of racing in Canada. Coates was also the first president of the Automobile Journalists Association of Canada.

Gerald Donaldson – One of the world’s top Formula 1 writers and television commentators, Donaldson has also written many books, including acclaimed biographies of James Hunt, Juan Manuel Fangio and Gilles Villeneuve.

Dave Franks – For 50 years, Franks has been a fixture at race tracks across Ontario, cranking out photos that have documented the history of racing for publications like National Speed Sport News and Inside Track Magazine.

Graham Jones – yet another Toronto Star Wheels alumni, the late Jones was a competitor himself who moved to the UK to explore racing and writing further. At one time, Jones was an editor at Autocar magazine, before taking on PR duties at Minardi F1, BAR and Tyrrell F1.

Pierre Lecours – Covered motorsport for Le Journal de Montreal for more than three decades. He’s the guy that introduced Gilles Villeneuve to Gaston Parent, who funded the racer’s entry into the 1976 GP3R, which launched him towards his legacy as a Canadian hero.

Dean McNulty – For close to two decades, McNulty was a fixture at motorsport events, as he covered events for Sun Media and later Post Media. He has played a large role in the rise of many of Canada’s racing stars.

Tim Miller – As the Hamilton Spectator’s motorsport reporter for more than thirty years, Miller has covered all aspects of the sport from local dirt tracks to Formula 1 and everything in between. When the CMHF had a physical location, Miller was the curator.

Jeff Pappone – With 20 years of top level auto racing coverage under his belt, Pappone spent most of that time writing for the Globe and Mail before becoming Inside Track Magazine’s Formula 1 correspondent. Jeff is also a director of the CMHF.

Dan Proudfoot – The first ever motorsport reporter for the Globe and Mail back in the early Seventies, Proudfoot spent many years as the motorsport columnist for the Toronto Sun. Having taken an early retirement, Dan still contributes automotive content to the Globe.

Erik Tomas – Canada’s only full time motorsport radio personality, Tomas hosts and produces Raceline Radio Network, which is heard on 15 stations across the country. Tomas has been a speedway announcer, television commentator and is the voice of CMHF induction ceremonies.

Wheels own Norris McDonald was actually the first journalist to be inducted into the hall as both a competitor and journalist back in 2013, before there was an actual category dedicated to those who bring the news of motorsport to the public.

As we took our seats for dinner, we learned that Andretti was in the air and would likely make it before the end of the night.

Townsend Bell did a bit of a monologue where he talked a bit about his racing in Canada and made fun of the appetizer. The room laughed, because a bag of fish soup was indeed a bit puzzling. Good, but odd. In other words, he killed some time before bringing Craig Jackson to the stage.

Anyone who has watched Barrett-Jackson on television knows that Craig Jackson is a passionate guy with lots of stories to tell. Jackson spoke a bit about his Javelin Trans Am racer, millennials and cars and more. Stay tuned for a story about him in the coming days.

Almost as if on cue, Mario strolled through the hall door as Bell was wrapping up his talk with Jackson.

Always a fun man to interview, Andretti was alight with enthusiasm answering Bell’s questions about his history of racing here in Canada, starting with a midget race near Quebec City in 1962.

One of the highlights of the Art and the Automobile display was a stunning McLaren M6B, nicknamed 429’ER that Andretti raced in 1969 for Holman-Moody. Andretti said “that one looks familiar” and discussed how brutal those cars were to drive, having way too much horsepower. 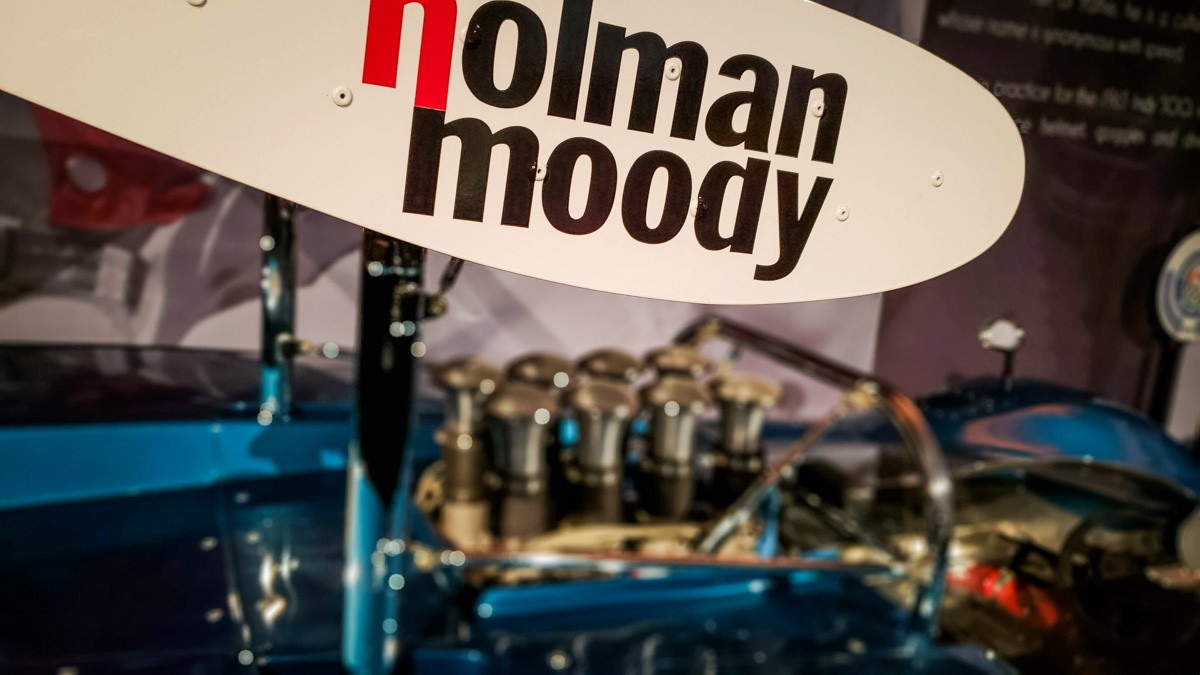 Still active in racing at 78 years old, driving the two seat Indycar thrill machine at every Indycar race, Andretti thinks that while computers are great, modern machines and drivers could benefit from more seat of the pants tuning rather than just relying on an engineer with a laptop. This proclamation brought cheers from many notable racers in the crowd, including Canadian racing legend Ron Fellows.

The date has not been set for the next round of inductions into the CMHF, beyond the news that they will be part of the 2020 Toronto show once again. 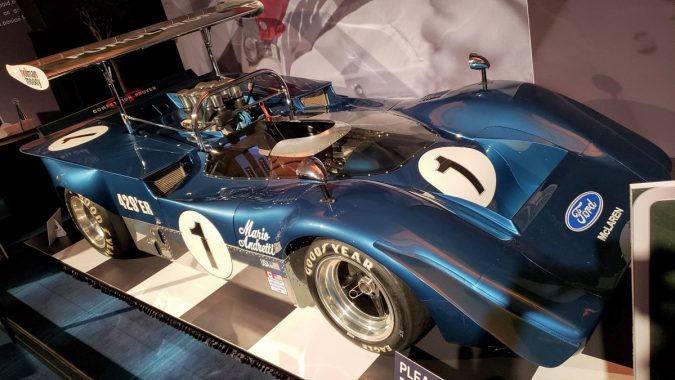 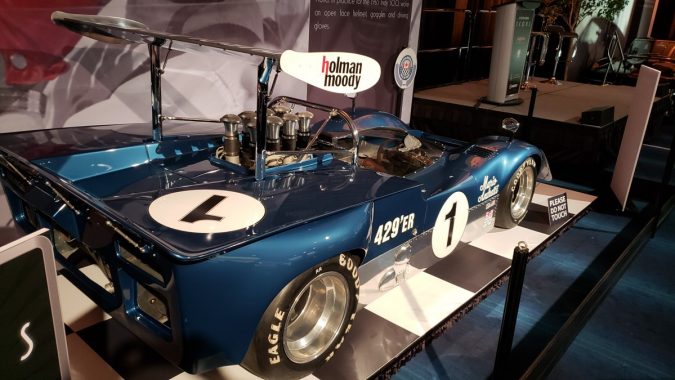