Fiat Chrysler chairman and CEO Sergio Marchionne visited the Windsor Assembly Plant (WAP) May 6 to officially celebrate the launch of the all-new Chrysler Pacifica and to recognize the efforts of the more than 6,000 people that brought the vehicle to market.

WAP continued its legacy as the home of the minivan with the start of production of the sixth generation family hauler on Feb. 29, 2016.

Joined by Unifor president Jerry Dias, Unifor Local 444 president Dino Chiodo and other FCA North American executives, Marchionne told about 2,000 day shift employees during an internal event that the Pacifica will not just redefine the minivan segment, but will also redefine the role and the future of the plant. 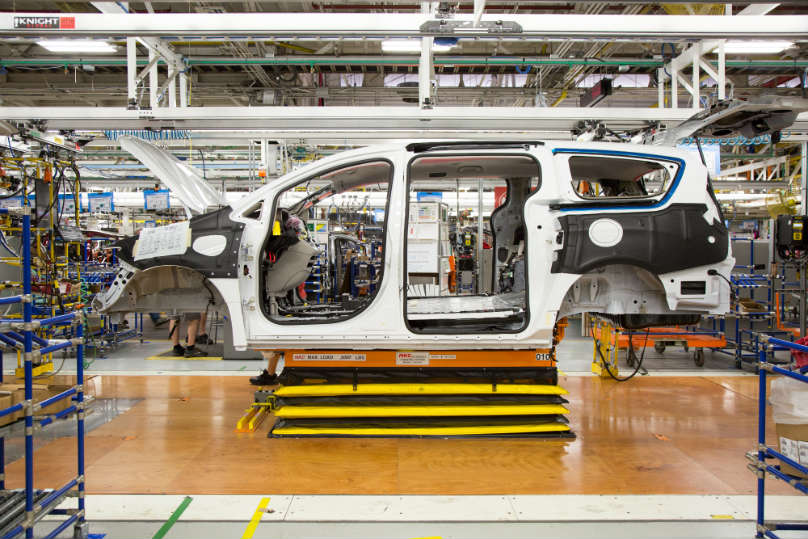 WAP has been producing vehicles in the Ontario town for the past 88 years and is the only manufacturer still operating in the heart of the city.

Many models have rolled off the line over the years, but none better known or recognizable than the minivan, which launched in 1983.

Since then, more than 14.3 million minivans have been sold to date, of which 10 million have come through the Windsor plant.

Of the (US) $2.6 billion spent to develop the Pacifica, $744 million USD (over Cdn $1 billion) was allocated to the Windsor facility to add modest footprint additions to complement the Company’s product quality initiatives, such as the addition of a Component, or Metrology, Center and Complete Technical Vehicle Validation (CTVV), as well as upgrade equipment and processes to produce the all-new Pacifica and the existing minivan on the same line.

More than 1,200 new, full-time permanent positions have been added at the plant since September 2014 to facilitate the production launch of the Chrysler Pacifica, bringing total employment to approximately 6,000 on three shifts.

In March 2014, WAP was the first FCA North American facility to receive the silver designation in World Class Manufacturing (WCM), a methodology that focuses on eliminating waste, increasing productivity, and improving quality and safety in a systematic and organized way.

WCM engages the workforce to provide and implement suggestions on how to improve their jobs and their plants.