Norris McDonald reminisces about the spirit of Grand Prix racing in our country, noting how the industry has continued to evolve.

A year or so ago, about six weeks before the 2016 Canadian International AutoShow was to open, I got a call from a woman named Juliana Chiovitti. I recognized the name because her family runs a karting operation in Sutton, and Juliana was a pretty good racing driver.

But to continue climbing the racing ladder takes money, and lots of it, and she fell victim — as do so many talented youngsters — to a serious case of the shorts. Translation: she didn’t have the cash to keep going.

So, she changed directions. She created a company that manages motorsport businesses and drivers, and this year, she’s started a team that will compete in the Nissan Micra Cup Series. She also has a contract job with the AutoShow, and that’s why she reached out to me last year.

She was putting together a display to mark the 100th anniversary running of the Indianapolis 500, and she asked if I could help her out by writing a report about Canadian involvement in the race that could be included in the exhibit. I was only too pleased to accept the invitation, and the resulting exhibit/display was a big hit with showgoers.

Juliana and I are back at it again this year, with additional help from general manager Jason Campbell. This time, the exhibit is a celebration of Fifty Years of Grand Prix Racing in Canada, and all I can say is, where did the time go?

I always tell young parents to enjoy every second of their children’s lives, because one day, they will wake up, and it will be over. The kids will be all grown up and having babies of their own, and the now-grandparents will think (or say), “That was fast.”

So, as I wander around the Grand Prix display (it’s downstairs in the North Building, across the aisle from Auto Exotica and around the corner from the John Bassett Theatre) and I look at the photographs from that first Formula One race at Mosport Park in 1967 (many of which I took myself), I think: “It might be 50 years, but it feels like five minutes.” 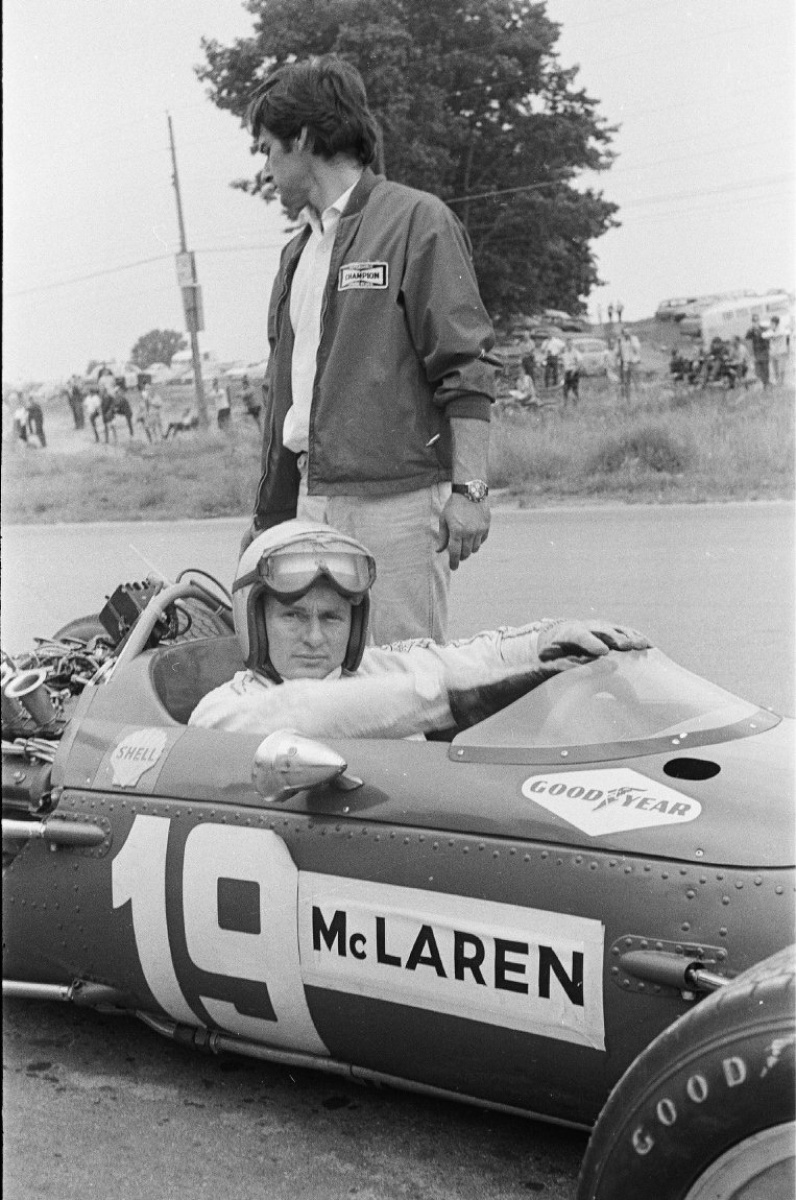 Which is the way it seemed on Wednesday of this week when many of the people responsible for launching F1 racing in this country — and for nurturing it through the years, and who are responsible for it today — met at the exhibit to officially open it and to reminisce about the good times and the not-so-good times, too.

Bob Hanna, who was executive-director of the Canadian Automobile Sport Clubs, flew up from Florida for the occasion. He was the fellow primarily responsible for convincing the FIA to award a Formula One World Championship race to Canada.

Unlike today, when F1, or IndyCar or NASCAR are run out of single offices, there was no “series,” per se (Bernie Ecclestone hadn’t yet arrived on the scene) and F1 teams had to be contacted individually. They all negotiated “starting money,” and some teams proved to be more expensive than others.

Hanna recalled being somewhat unsettled the week of the race. He’d arranged to have all the cars shipped over to Canada aboard an Air France cargo plane. He’d received a telephone call from Paris saying they couldn’t get all the cars into the plane but that they’d work on the problem and get back to him in a week or two. He explained that the race was scheduled to be held at the weekend and he needed all the cars in Toronto, pronto. The problem was eventually solved but he had a few sleepless nights.

Sid Priddle, who went on to become one of the most respected auto racing public relations practitioners in North America, was just starting his career with a company that had the contract with Imperial Tobacco, whose Player’s brand was sponsoring the Grand Prix. Priddle got laughs about how, exactly, the race winner, Jack Brabham of Australia, wanted his $3,000 winnings.

“He wanted it in cash, and in a garbage bag,” Priddle said. “It was easier for him to carry it that way. And he was going right back to Europe, so he was concerned that he might not be able to cash a cheque.”

Rod Campbell was there from Los Angeles, and he is one of the most fascinating people you would ever want to meet. Born into poverty on the Canadian prairie, the son of a preacher, Campbell found his niche in life selling advertising and promoting companies and products.

A radio and TV personality in Montreal at the time of the first race, he went to Mosport as an announcer and to shake hands. The first of his many contacts that he met there led to opportunities that resulted in him, years later, creating Campbell & Co., which went on to handle a significant amount of marketing and public-relations work for the Ford Motor Co.

Oh, and he did a few jobs with Sir Jackie Stewart along the way. Stewart drove a BRM in that first F1 Canadian GP, and that’s where he and Campbell met.

Another friend of Sir Jackie’s, Dr. Hugh Scully of Toronto, who — with the late “doctor to the drivers,” Prof. Sid Watkins — is largely responsible for the evolution of motorsport medicine, got a laugh when asked about medical facilities at Mosport and Quebec’s Le Circuit Mont-Tremblant in the mid-1960s.

“There weren’t any,” said Scully.

“It took a lot of years and a lot of work to get to where we are today,” he continued. The big danger in those days was fire, but the fuel (cell) bladder has largely eliminated that. And the HANS device (head and neck support) has saved the lives of many. At one time, up to a third of the drivers who started an F1 season could die; these days, there are few, if any, fatal accidents.

The second F1 Grand Prix was held at Le Circuit (then-Prime Minister Pierre Trudeau attended; an armed forces helicopter carrying him landed right on the race track, and the PM actually waved the Canadian flag to start the race) before returning to Mosport in 1969. Except for Le Circuit in 1970, and a cancelled race in 1973, Mosport was the permanent home of the GP through 1977.

Then, Labatt — which had spent a fortune to create the Toronto Blue Jays — wanted to spend an equal amount in Quebec and opted to move the Grand Prix from Mosport (which the FIA had declared unfit for further F1 competition) to Montreal.

An approach was made to Mayor Jean Drapeau, responsible for Expo 67, the first major league baseball team in Canada, the Expos, and the 1976 Olympics, who didn’t hesitate when asked if his city would accept the race.

He had two problems, though: who to run it and where to hold it.

The first was easy. Normand Legault was the son of an advertising executive whose company had sponsored motor races previously. He was available and went on to promote the Grand Prix until 2006 before turning the reins over to François Dumontier. Both men were at the F1 reception Wednesday.

As was Roger Peart of Mississauga who was an executive with the CASC at the time. He was assigned the task of finding a place to hold a Grand Prix and looked all around Montreal before, while standing on the shore of the St. Lawrence River one day at dusk, a light bulb went on inside his head.

A geodesic dome had caught his eye. It was on an island. Said Peart to himself: “They held Expo 67 out there. There were lots of pavilions. They were connected by roads. That’s it! We’ll use those roads to hold the race.” Or words to that effect.

And that’s how it came to be that the F1 Canadian Grand Prix was moved to Ile-Notre Dame in time for the 1978 race. It is still held there — it’s Montreal’s biggest tourist weekend of the year, with all the hotels and restaurants jammed and 100,000-plus turning out on race day — and will be held again this year from June 9 to 11.

Of course, the circuit is now named after the late Gilles Villeneuve, who died when he was thrown from his Ferrari in a massive accident at the Grand Prix of Belgium in 1982. Acknowledged as being the patron saint of Canadian motorsport, Gilles Villeneuve started his career with Ferrari at that last Mosport race in 1977. He won the first Grand Prix to be held in Montreal. It was also his first F1 victory.

His son, Jacques Villeneuve, was there Wednesday. He won the drivers’ world championship in 1997 — his dad won races but never the title — and his latest project is the design of a race track called Area 27 near the Okanagan Valley community of Oliver in British Columbia (Gilles Villeneuve raced and made the No. 27 Ferrari famous).

His widow, Joann, and his daughter, Melanie, were also in attendance and they brought a restored 1971 Ford Boss Mustang to put on display. Gilles Villeneuve liked that car and kept it in the garage that was part of their house in Monte Carlo when he was racing in F1.

It’s still got Monaco licence plates on it, and on Wednesday, it attracted as much — if not more — attention than all of the F1 cars in the hall put together. 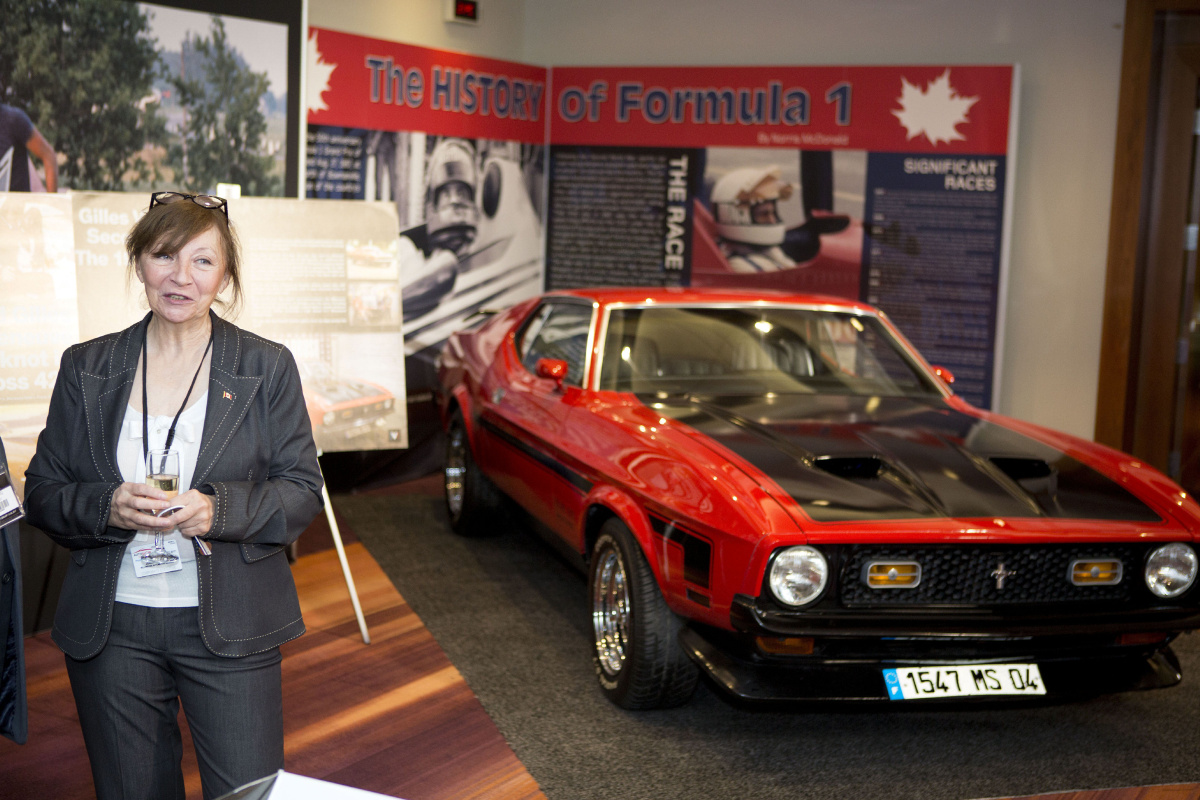