Moses Znaimer, creator of CityTV, MuchMusic and many other beloved Canadian channels, is more than just a television pioneer; he’s a car lover.

Moses Znaimer, creator of CityTV, MuchMusic and many other beloved Canadian channels, is more than just a television pioneer; he’s a car lover. In the early 70s, Znaimer began to produce television with a flare that had never been seen before, on channel 79, CityTV. Concepts such as Speakers Corner and the Streetfront Storefront operation at the corner of Toronto’s now famous Queen West and John Street were originated by Moses as initiatives to offer a local and hip platform for youthful audiences all over Canada. Today, he is a champion of the baby boomer population, which he calls, “Zoomers,” and he founded ZoomerMedia Limited, a multi-media and production company located in The ZoomerPlex in Liberty Village.

As a car lover, I couldn’t help but wonder what an artistic innovator like Moses drives. Wheels had the pleasure of sitting down with him on a hot summer morning in his High Park home. His house is just as complex and diverse as many of his creations. My first steps onto the Znaimer grounds were through a majestic manmade trail that wraps around the entire house. The laidback and calm vibe of the property gives more of a Los Angeles feel compared to the fast-paced, jittery, Toronto lifestyle. The trail is immersed in greenery and mapped out with slabs of rock that lead toward different sections of the home. I made my way down a path that led me toward the centre of his backyard, where I see two of Moses’ unique cars parked on his hidden pebble stone driveway, just waiting for me to write about them.

“Hi Moses,” I said as I saw him standing at the door.

“Well hello! Come in the kitchen to talk, can I get you anything? Pineapple juice?”

Keeping with the L.A. vibe, the inside of Moses’ home is bright and white. I imagine the décor is similar to the inside of his mind; modern with hints of tradition, artistic, and most definitely, unique.

“I have always had an instinct for design, architecture, and beautiful objects.” Znaimer began to explain his taste in cars.

Of all the cars he has owned, Moses admitted his favourite will forever remain his 1954 white Jaguar XK120 Drop-head Coupe. “I set my sights on that Jaguar because I believe it’s the most beautiful car ever made. It looks exactly like its name. The leaping lines are like an aggressive cat – a jaguar.” 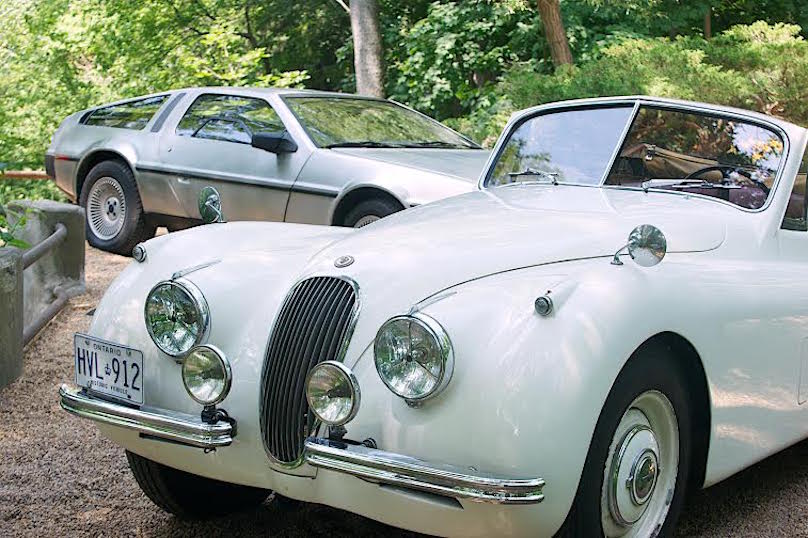 The ’54 Jag was his first car, and he wouldn’t be Moses Znaimer if the story behind its purchase was simply that he bought it from a dealership. No, Moses chased after that car as aggressively as he chased after his success. 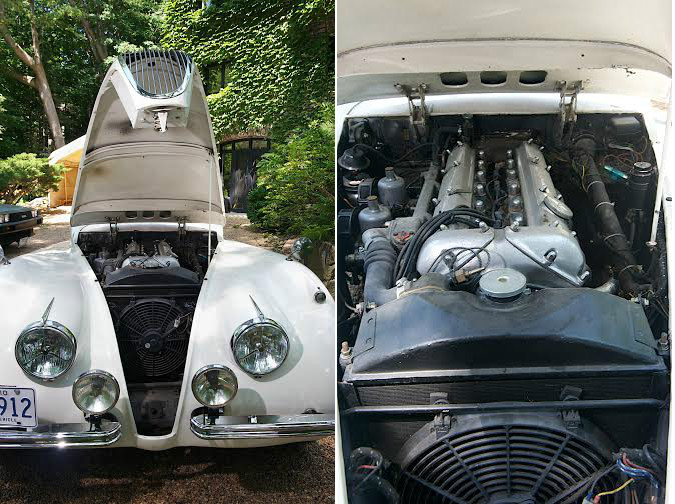 In 1965, following his graduation from Harvard, Moses had a job interview at CBC in Toronto. After the interview, Moses walked out of the building and laid his eyes on that Jaguar parked at the side of the road. He took down the license plate and sought out the owner by going to the Department of Transportation. He arrived around 11am and spent an hour trying to convince a supervisor to give him the contact information. At noon, when everyone broke for lunch, one young woman stayed behind, “She must have been listening from her desk, because she slipped me a piece of paper with the vehicle owner ’s information.” 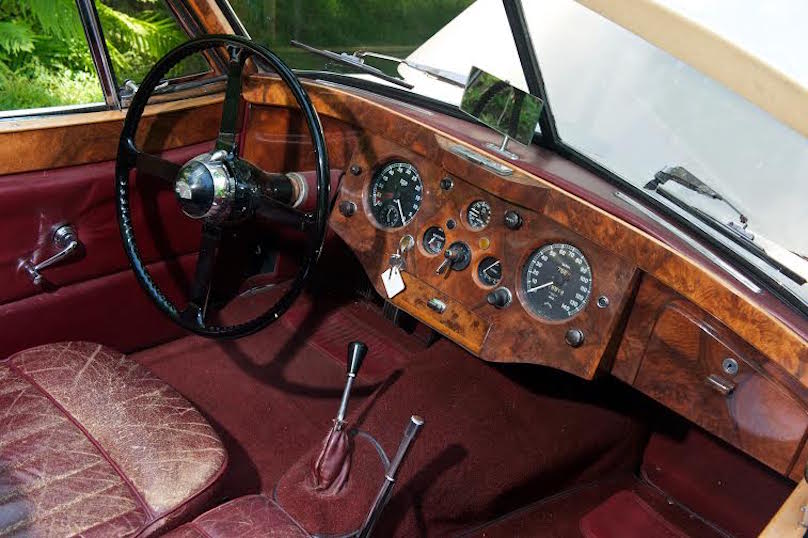 “I called the man who owned it, and succeeded in keeping him from hanging up. He was a well-established business man in his 80’s who used the Jaguar solely for drives up to the cottage, with his 75-year-old girlfriend. I soon discovered that she was having difficulty getting in and out of the Jaguar in her skirts because the vehicle was fairly low to the ground.”

This, Moses thought, would be his selling angle.

“I convinced him to buy a new flaming red Mustang, which had just come on the market, because it was higher off of the ground and his lady would be able to enter and exit the car with ease.”

Moses’ 1954 white Jaguar XK120 Drop-head Coupe is in almost completely authentic condition other than an added bumper at the back for safety and a handmade fan against the radiator to help cool the motor. Despite those small modifications, he told me his Jag was recently appraised at $147,000.00. Not a bad investment. 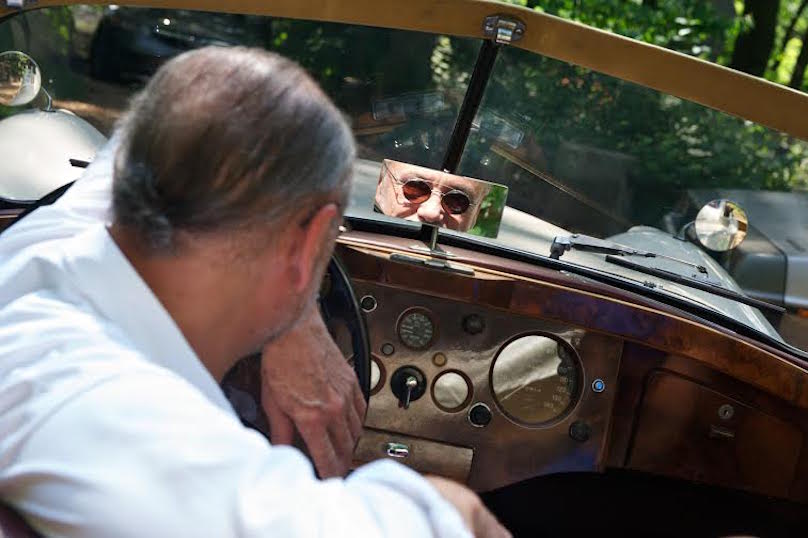 After pulling myself out of the Jaguar trance, I accompanied Moses back outside to his pebble stone driveway to look at his second favourite car, the DeLorean DMC-12. I pulled up a gull-wing door and took a seat. I think anyone who looks at this vehicle immediately gets a craving to watch Back to the Future. The 1985 blockbuster movie turned this car into a retro icon. Since the company stopped production after a few years (1981-1983), only about 9000 DMC-12s were made. Last year, it was announced that replicas will be produced for sale in 2017, but of course, the originals are most coveted. Moses has kept his in pristine condition. 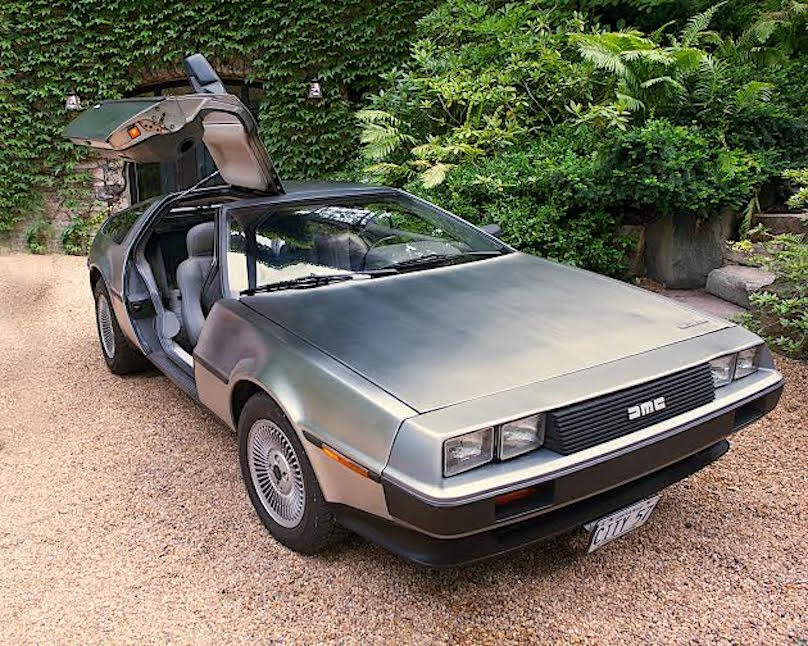 The DeLorean is such a peculiar car. There is something that is so 80’s about it, yet with its aluminum skin and space age design it still looks very futuristic, even after all of these years. I noticed that the skin barely has a scratch on it, even though he still drives it around.

ALSO READ: The Fascinating Story Behind the DeLorean

We popped the back hood of the car where its engine rests and Moses showed me how well-maintained it is. Well-kept, but not shiny like most classic car owners keep their engines. “I have gotten a lot of flak from collectors and car connoisseurs because I drive the cars,” he said, “To me, they’re machines; made to be driven and enjoyed, not just on display.” I asked him if he thinks he’ll buy any more classic cars in the years to come, but he said that he will probably just keep the DeLorean and the Jaguar.

“They’re timeless, and they portray the eras they are from so well.”