If Antoine L’Estage emerges victorious at the Rally of the Tall Pines, which takes place Nov. 28-29 in Bancroft, Ont., he’ll be the first Canadian rallyist ever to sweep all six events on the Canadian Rally Championship calendar.

Antoine L’Estage will become country’s first undefeated rallyist is he is victorious at Tall Pines.

Rarely has this country produced a competitor so crushingly dominant at his game. L’Estage, a 41-year-old rally racer from Saint-Jean-sur-Richelieu, Que., is making a habit of kicking down the Canadian Rally Championship’s most long-standing records and leaving no accomplishment unconquered.

For instance, not only did L’Estage claim his seventh Canadian Rally Championship this year — which pushed him out of a three-way tie with legends Frank Sprongl and Tom McGeer to give him the most Canadian title wins in the sport’s history — but he did it by winning the first four events in a row and securing the championship with two rallies still to be run.

What’s more, he went on to win the fifth rally of the year as well, leaving him poised to sweep all six events on the calendar if he’s able to emerge victorious at the Rally of the Tall Pines, which takes place Saturday in Bancroft, Ont. If he pulls it off, he’ll be the first Canadian rally racer to do it.

And as if that weren’t enough, L’Estage has done all of this while learning to work alongside a new co-driver, Alan Ockwell of Toronto, who started racing with him at the second event earlier this year.

Well, it turns out he has that, too. L’Estage carries himself as a sportsman that Canadians can look up to with the perfect mix of pedigree, athleticism and attitude.

He was born into a rally-racing family. Photo albums from his childhood are littered with images of him and his younger brother and sister watching father Jacques compete in rallies throughout Quebec, some taken before he was old enough to walk. 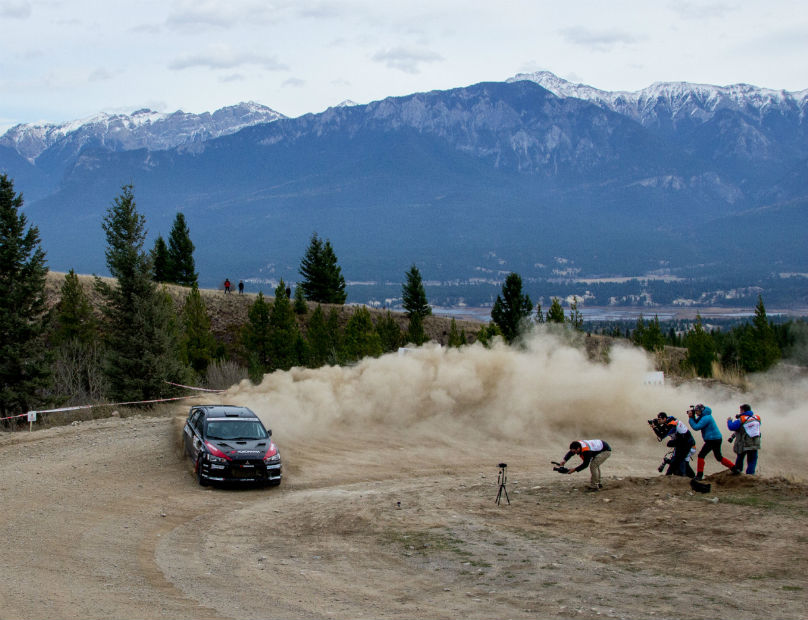 “We’ve all been involved in the sport,” L’Estage explains. “It’s still a subject of discussion during family suppers and things like that, for sure.”

After observing for years, it was in his early teens that he became an ardent student of the sport. A future in rally competition was inevitable.

But once he finally got to strap himself into a car, he went through the same growth process that all homegrown athletes do. In fact, his skill and determination have even firmer roots than in many others.

“I’m not a guy who comes from a rich family,” he says. “I did it all on my own. I climbed the ladder, started with a small car and slowly went to a bigger car, found sponsorship, and had some good results.”

L’Estage’s very first victory at Tall Pines in 2004 is an early example of his emergent champion qualities, and it stands out in the mind of John Buffum, one of the all-time most successful rally drivers from the United States. Buffum has acted not only as a mentor to L’Estage but has also been building cars for him out of his Vermont-based shop since 2002 — Hyundais originally, then Mitsubishis in more recent years.

Buffum recalls to this day how unwaveringly confident L’Estage was when he was sure his first opportunity at victory had come.

“He broke a halfshaft on the first loop of stages,” Buffum remembers. “He came in and we fixed the halfshaft, and he was a minute behind. He said, ‘This is a good car. I can win this rally.’

“He didn’t say it in a boasting way . . . He didn’t say, ‘I’m so good I can beat them.’ He said it because he meant it. He really felt he was going well, the car was going well, and looking at the overall situation he could do this.He had the right outlook — not overconfident, but confident. I thought, wow, that was pretty bold of him to say that being a minute behind. But sure enough, he did (win).”

L’Estage also endured hardship on his path to maturation. Terry Epp, national series manager for the Canadian Rally Championship and a former professional co-driver who competed against L’Estage’s father in the 1980s, recalls one major incident that generated a shift in L’Estage’s outlook on the sport and marked a major turning point in his career.

“He had a crash at the Rocky Mountain (Rally),” Epp says. “It was on powder face, and it was a big, big crash.

“He was trying to win and another team was in front of him after the first few stages. I said to him, ‘He’s not your competition. Don’t worry about him.’

“He went into the stage and he went off in a big, big way. The car was pretty well beat up. He went off at an exposure and landed on the back end. Where he landed in the bog was between giant rocks. He had a lot of luck with him.

“Right after that crash at Rocky, things changed dramatically for him in his reliability and his determination. No more crashes — very rarely.”

Suddenly, youthful recklessness was gone and the trophy collection began. The 2006 season marked the first of L’Estage’s titles and the genesis of what has become a bona fide dynasty in Canadian rally racing history.

Having made himself a student of his sport, L’Estage has carefully honed the many skills unique to rally racing that put him at the top of his game.

“I’m a pretty humble guy, I don’t talk very much about these things,” he admits. “But I’m a very smooth driver, apparently, from what everybody says.

“Sometimes watching me from the outside is not always the most spectacular. Sometimes people will see me go by and they’ll see another car and they’ll think the other car is quicker, and you look at the time at the end of the stage and I’m 10 seconds quicker.

“I try to be the least sideways as possible, try to drive straight and try to be smooth. I’ll give up nice photos for a good time.”

Alan Ockwell, a co-driver with 14 years of experience who first began working with L’Estage at the Rallye Baie-des-Chaleurs in June, finds the immense effort L’Estage puts into race preparation to be key among his competitive strengths.

“That makes it easy for me because I never have to second-guess what he’s saying. I’m never thinking, ‘I’m not sure about that, he’s maybe being a bit too optimistic.’

“It gives me a sense of reassurance and confidence for myself, too, that we’re going to be okay. As long as I do my job, he’ll be able to do his job and we’re not going to end up in the ditch.”

Epp adds that L’Estage never lets anyone get the better of him at events in any way.

“He likes to go out and set the pace early,” he says. “He seems to attack the first stages of the rally faster and better than anyone else, and he always sets the tone.

“He is physically fit. He puts a lot of time into fitness and nutrition. He’s mentally strong. You’re not going to play mental games with Antoine. He’s not susceptible to someone else playing with his mind.

“Those are all strengths that translate into being a dominant force that is very hard to beat.”

The fitness aspect of motorsport is one that’s often overlooked, but it’s critical to success in rally racing for a multitude of reasons.

“I train every day,” L’Estage says. “I do a lot of cardio and some weights also. The goal is not to become a bodybuilder but to be fit and to have a lot of endurance.

“Rallies are often very long. You’ll get up at 5 (a.m.) the day of the reconnaissance (usually the day before the rally race, where the competitors get to go over the course), and then you’ll have two days where you’ll spend 12 hours in the race car — sprint and stop, sprint and stop. You’re sweating a lot, and if you’re not in good shape you lose concentration, you get tired, and that’s where you’re slower.”

“Also, if we want to push it even more than that, we try to stay as light as possible because the teams are working really hard to bring the car to a minimum weight and you try to balance everything. If you want to gain every last tenth of a second and you do these things but you show up to a rally 20 pounds (overweight), it’s not really good.”

Interestingly, L’Estage cites his own self-doubt as his primary challenge, yet he sees it as a positive contributor to the success he’s enjoyed.

“Even though sometimes I look very confident, I never take anything for granted,” he says. “I never go to a rally thinking I’m going to win, even if I go to a rally that I’ve won many times and that I’m comfortable with . . . “I’m not afraid of anything in rallying right now. I’m comfortable with almost everything, and I think I manage quite well every aspect of the sport. “I’ve been around for a long time and I have a lot of experience. But sometimes I still doubt. But that’s good. It keeps me focused and keeps me pushing.”

The final piece of the puzzle for many great athletes is the support system they keep around them. L’Estage has always had the backing of his family and friends, a great mentor and top-notch car builder in Buffum, and a long list of excellent co-drivers.

He’s also worked hard to secure the support of reliable sponsorship, which he’s found first and foremost in Yokohama Canada for the last 11 years.

“They’ve been really good to me,” he says. “And they have a great product. I’ve won all my championships, all my rallies with their product, and I’m really proud of that. I think they’re proud of what we’ve done together.”

Every one of these factors adds up to the highly accomplished and deeply underappreciated athlete that L’Estage is today. In the realm of Canadian rally racing, he has more wins than any other active driver and his record can only get better. He’s already being listed by his peers among the greatest of all time.

“We’ve had Taisto Heinonen, Frank Sprongl, Walter Boyce, John-Paul Perusse, Pat Richard, and Antoine,” Epp says. “Those have been the big, dominant stars of Canadian rally since the 1970s.

“His titles, his victories, his dominance is phenomenal. He’s definitely one of the best we’ve ever produced.”

And yet, instead of revelling in his own successes, L’Estage is already looking ahead to how he can develop and inspire the next generation of young rallyists to secure the future of the sport he loves.

“I remember when I won my first Canadian championship in 2006,” L’Estage says. “I thought to myself, ‘How the hell did Frank and Tom win six championships?’ This is so much work. This is so hard.

“Now I’ve done it seven times, and I hope I can inspire younger drivers. I’ll tell everybody that it’s possible. If you work hard, it’s possible to have success.”