The Toyo Tires Formula 1600 Championship has exploded from a little-known regional club series to a major player in the North American driver development system.

If you’re a young superstar racer trying to decide where your career should take you next, there’s a series based right here in Ontario that deserves your immediate attention.

The Toyo Tires Formula 1600 Championship was taken over just one year ago by veteran motorsport promoter Jason Sharpe and his team at Move Motorsports Management. In that brief time, it has exploded from a little-known regional club series to a major player in the North American driver development system.

In one of the changes designed to raise the profile of the series and its drivers, an inaugural Night of Champions was held last Friday night to celebrate the successes of rising stars and veterans alike.

The 2013 winner in A class was Jack Mitchell, Jr., a 17-year-old from the suburbs of Chicago, Ill., who raced for Exclusive Autosport, a first-year team in the series.

Perhaps tellingly, Mitchell was unable to attend the Night of Champions as he was in the U.S. attempting to win the MazdaSPEED graduation scholarship in the Skip Barber Championship Shootout. There, he wound up finishing third.

Sharpe said that boasting an American champion speaks to the attention the series is enjoying under his group’s changes.

“With the increased effort we’ve put in,” Sharpe said, “we’ve really expanded our reach when it comes to where drivers see us and how they find us. They’re finding us before they find anyone else at this level.

“We’re getting calls from as far away as South America, especially since the announcement of the Super Series.”

The Super Series is a key development in raising the profile of Formula 1600 racing in Canada. It will see the Ontario regional series come together with Quebec’s equivalent, the Formula Tour F1600 Championship, to race a combined mini-series at four of Canada’s most high-profile motorsport events: the Victoria Day Speedfest Weekend at Canadian Tire Motorsport Park, the Formula 1 Canadian Grand Prix in Montreal, the Honda Indy Toronto and the Grand Prix de Trois-Rivières.

The formation of this series will provide young racers with unprecedented opportunities to display their talents in front of some of motorsport’s biggest players and is expected to attract competition from far afield.

“There aren’t too many junior formulas that are racing at four key events like that, so we’ve got a lot of interest,” Sharpe said.

In addition to local competitors, he also expects to see teams and drivers from the U.S.-based F1600 Formula F Championship make the trip north of the border.

“The American guys, with an hour or two of work — maybe a little spring change, a few different things —  they’re ready to compete with us,” he said. “You’re going to see some impressive young American kids up here next year.”

Another driver who celebrated success at the Night of Champions was Ottawa’s Zacharie Robichon, who finished the year second in A class, a feat that saw him also secure Rookie of the Year honours.

Robichon had a year on fire.

“I was hopeful for the rookie of the year,” he said, “but I didn’t think I would be competing for the overall championship so early in my career. On the very first weekend I finished third on both days, and I think I was more surprised than anybody.

“Overall, it was a great season and I can’t even explain how much I learned,” said Robichon, who was selected along with USF2000 Series champion Scott Hargrove of Vancouver to race for Team Canada at this year’s Formula Ford Festival in England.

Third place overall in A class went to Jesse Lazare of Pointe Claire, Que., who also claimed this year’s Can-Am Cup and the MG Homes Pole Position Award in F1600 while he ran partial schedules in USF2000 and elsewhere.

The series B class, which allows entrants to compete in chassis produced prior to 1995, also crowned a young champion in 2013. Craig Willis, an 18-year-old from Georgetown, drove AIM Autosport’s Arrow 2 car to a staggering nine wins while breaking B class track records at both Shannonville and Calabogie.

“My dad raced, my mom raced — that’s where they met was at the race track,” he said. “My grandpas raced, my uncle, my aunt — everyone has raced. So, getting into the car finally has been a dream that I’ve been waiting for my entire life.”

This was Willis’s first season racing a car. Provided he can find the funding, Willis hopes to move to A class and continue his success with a title run there in 2014.

Also announced at the Night of Champions was the winner of the Gord Lowe Award, established in memory of the long-time Ontario racer and presented each year to a member of the paddock who best displays the ability to race with a competitive streak without losing sight of fun and camaraderie. This year, the recipient was B class competitor Connor Wagland.

After a year of intense, fast-paced growth, Sharpe is more certain than ever of the role the series plays in the junior racing development sphere in North America.

“Formula 1600 gives you the opportunity to come in and make mistakes,” he said. “When you do well, you get a chance to tell everybody how good you are, and when you don’t, it’s not that big a deal because that’s what you’re expected to do here.”

For any young racer honing his or her skills, Sharpe says: “This is where you should be.” 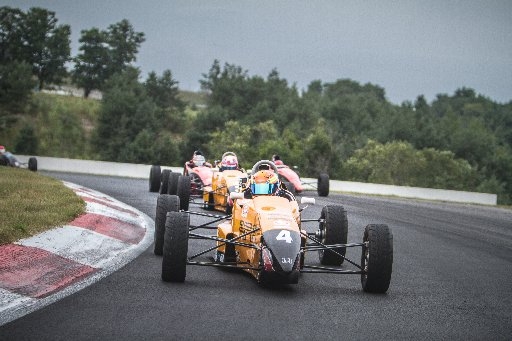