Former Wheels editor Norris McDonald recounts how a Scarborough house painter made $3.5 million so his kid could go racing

Join the Conversation (0)
Canadian champion racing driver Paul Tracy likes to say that his father, Tony, a Scarborough house painter who died on Sunday, Oct. 23, at age 92, raised some of the money to send Paul racing in the early days by painting the CN Tower.

This may very well be true. But there is also another story about how Tony came up with the dough – about $3.5 million, in total, before Paul signed his first pro contract, with Penske Racing.

I was there when much of this happened and it is, indeed, a fascinating tale.

The story involves, primarily, a gentleman named R. Howard Webster who, at the time, owned the Globe and Mail, which was located on the corner of King at York streets in downtown Toronto.

Now, anything you read about Webster makes reference to the fact that he enjoyed the odd social drink. This also may very well be true, but he sure  enjoyed those drinks frequently when he was in Toronto staying at a hotel across the street from the Globe and Mail called the Lord Simcoe Hotel, which he also owned.

Webster had a friend (some of us called him Howard’s minder) named Ernie Ireland, whose job when Webster was in residence at the Simcoe was to keep an eye on him.

Tony Tracy, meantime, periodically would pop into the hotel’s Sentry Box Lounge to enjoy lunch with a pal of his, a guy named John Judson. Tracy had given up the grog years previously but enjoyed the pub food and atmosphere, plus his buddy Judson was a regular at the Sentry Box.

If not for that friendship, none of what follows would have happened.

On this particular day, Tracy was tucking into fish and chips with Judson and others who habituated a large round table just inside the Sentry Box Lounge entrance doors. And they were talking about car and motorcycle racing and aircraft restoration when Webster felt the call of nature and headed on out the door, escaping the watchful eye of Ireland.

There used to be a men’s room off the main hotel lobby between the Sentry Box Lounge and another licenced establishment called the Beau Nash Room, where lounge singers like Billy Reuben would hold court.

Webster found the door to that men’s room, pushed it open and walked into complete darkness. Someone previous to his arrival had turned off the light and you couldn’t see a thing.

In those days, men’s rooms frequently had a dispenser of cologne, prophylactics and so on hanging from a wall. For some reason, and this has since been fixed, you would drop your quarter into a slot and push on a handle about six inches long to get whatever it was you were purchasing.

Those six-inch-long handles could be lethal.

Remember: it is pitch black. Webster is feeling around for the light switch when one of these six-inch-long dispenser rods snags him right at the corner of his right eye. The pain is excruciating. Within seconds, Webster is in a state. He is injured, he can’t see a thing , he has fallen to his knees and he’s calling out for Ireland.

And who should come walking into that washroom at that very moment but Tracy. 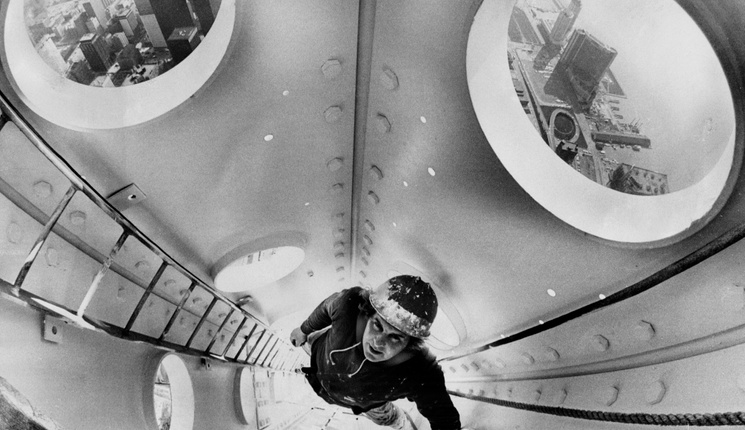 Tracy is one of the few people in the place who is stone cold sober and perfect to handle an emergency such as this. He quickly evaluates the situation and realizes that Webster requires hospital help. Being a Scarborough house painter, he is wearing a white T-shirt which he takes off  and rips into a rudimentary bandage. Once attached, he starts to guide Webster toward the front door of the hotel.

Tracy and a bloodied Webster exit the Simcoe and Tracy asks the doorman to summon a taxicab. “Take us to the Toronto General Hospital emergency department,” Tracy instructs the driver, “and  don’t waste any time.” The cabbie  does as he is told and whips up University Avenue in a flash.

It does not take long for the Toronto General emergency department staff  to leap into action once they see a well-dressed man with a bloodied bandage around his head being accompanied by a swarthy once-upon-a-time redhead who doesn’t have anything on from the waist up.

Before you know it, Webster is patched up and he and Tracy are in a cab back to the Lord Simcoe Hotel. And, as you can imagine, by this time, Webster is in love with Tracy.

Upon arrival, Webster tells Tracy to come with him into the offices of hotel general manager Peter Hill. Webster tells Hill what has happened and says he wants to reward Tracy.

Hill knows that Tracy is a Scarborough-based house painter so suggests that he contract with him to paint a couple of hotel rooms that need sprucing up. Webster thinks about this for a moment, shakes his head, and says: “This man deserves more than that. I want him to renovate the entire hotel.”

Which was, in the end, a reward worth several millions of dollars.

Tracy didn’t like to talk about deals such as this one (only one other reporter knows what I know) because there were many. Tracy was a player, which you have to be when you are raising millions of dollars to turn your son into a world-class racing driver.

But it was all legal (most of it, anyway). And even if the CN Tower played a role in there somewhere, Paul Tracy owes as much, or more, to a gentleman who owned a newspaper and the hotel next door, and who was found in the men’s washroom injured and without a friend in the world.

Norris McDonald is the former editor of Wheels. He is semi-retired.