Canadian Car of the Year finalists: Breaking down the final contenders

The winners will be announced at the CIAS media preview in Toronto on Feb. 11th. 2016

It’s down to the final lap in this year’s race for Canada’s best car and sport utility vehicle for 2016.

The winners will be announced at the Canadian International Auto Show’s media preview in Toronto on Feb. 11.

Six finalists were announced last month, whittled down from the original 41 cars, utes and pickups, across 11 categories, tested by the Automobile Journalists Association of Canada (AJAC).

To qualify, vehicles must be completely redesigned or modified from the previous year. Entrants were evaluated at the 28th annual AJAC Testfest program held at Canadian Tire Motorsport Park last October.

During testing, vehicles were driven by 75 journalists from across Canada over four days with real-world driving on public roads, a race track for sport and performance abilities, and off-road to evaluate utility vehicles. And to ensure fair and objective comparisons, all of the vehicles were tested within their specific categories, back-to-back on the same day and under similar conditions. 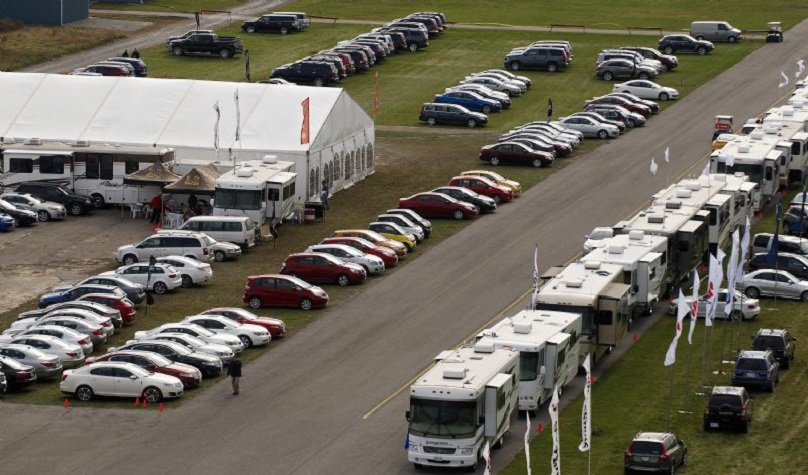 Canadian Car of the Year:

The Ontario-built Civic continues to be Canada’s bestselling car 18 years in a row and it’s the best new small car under $21,000, with a starting price of $15,990. This year’s model is completely redesigned, running with an all-new chassis and Honda’s first turbo engine for a Civic in the Canadian market.

Still classed as a compact car, the new Civic boasts more leg, shoulder and cargo room. Improved materials create a more upscale environment, and it has a bolder exterior look. The Civic is wider and longer yet manages to provide a smooth ride and handling.

Appearing to be a small car from the outside, this wagon comfortably seats five with lots of space for gear in the back. Starting at a base price of $22,795, this family-class vehicle is a lot more nimble and fun to drive than any van yet offers more inner space than some crossovers.

The exterior styling is sleek and the design inside is modernwith a 6.5-inch touchscreen that supports Apple, Android and MirrorLink connectivity. The rearview camera is standard and new features include a driver assist package option with a blind spot monitor, lane-departure warning and an auto dimming rearview mirror.

Its 1.8-litre four cylinder makes 170 hp with a fuel efficient L/100 km: 9.9 city, 6.1 hwy. and it is available with a manual transmission, a rarity in family sized vehicle today.

It looks just like any other Golf from the outside yet this best sports/performance car under $50K winner is anything but. Its 2.0-litre turbo engine puts out 292 hp, hitting zero to 100 km/h in 5.8 seconds, easily surpassing the GTI’s performance.

Canadian Utility Vehicle of the Year:

Rated as the best new SUV/CUV from $35,000 to $60,000, the third-generation Sorento’s increase in width, length and its significantly longer wheelbase on a stronger platform has bumped up the interior space, which is really noticed in the cargo area.

The Sorento offers four trim levels ranging from the front-wheel drive four cylinder five-seat LX to the all-wheel drive, seven-passenger, 3.3-litre, 290 hp V6-powered SX. In between, there are three four cylinder options, including a new 2.0-litre turbo, so fuel rates vary with trim and engine choices.

This under $35,000 SUV/CUV may not be much of a cargo hauler for its class, with only 452 L of space behind the back seat, but great exterior looks, good ergonomics, an exceptional infotainment system and solid drivetrain make the CX-3 a fun to drive car.

The Skyactiv 2.0-L I4 engine produces 146 hp, and combined with a six-speed automatic transmission there’s plenty of power and terrific fuel economy on regular gas rated at L/100 km: 8.8 city and 7.3 hwy.

A back up camera is standard while heated seats and a user-friendly navigation system are optional, as is all-wheel drive. The CX-3 comes with Mazda’s unlimited mileage warranty.

Winning the North American Truck/Utility Vehicle of the Year prize at the 2016 Detroit auto show may have come as a surprise for some, but not those who tested this SUV. A comfortable and roomy seven-seater that costs over $60,000, it comes with a 2.0-litre turbocharged and supercharged I4 engine that produces 316 hp to easily handle the job of getting around with ample cargo space to boot. A plug-in hybrid model is also available.