Rob Tenuta ordered his 2017 911 Carrera 4 Targa GTS in February, not knowing he was buying the model that preceded the millionth 911

Join the Conversation (0)
A Woodbridge, ON, man has taken delivery of a historic Porsche – the 999,999th 911 sportscar ever produced.

Rob Tenuta ordered his 2017 911 Carrera 4 Targa GTS in February, not knowing he was buying the model that preceded the millionth 911, a green Carrera 2 coupe, down the assembly line and into the history books.

The millionth 911 is currently on a world tour before being put on display in the Porsche Museum in Germany.

Tenuta’s 911 Targa GTS will be ensconced in his Woodbridge garage at home.

Married with two children, he is the owner of Excel Drywall in Woodbridge. His 72-year-old father, a barber who is still working, also lives in Woodbridge.

Joining him were Pfaff officials and Alexander Pollich, president and CEO, of Porsche Canada who presented Tenuta with a letter certifying his car is No. 999,999 plus a small keepsake. 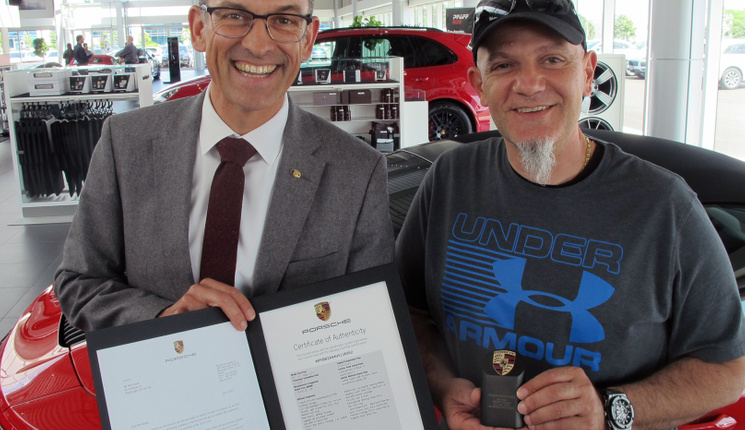 Tenuta owned two Porsches previously, a Cayman and a 911 Turbo, both of which he bought used.

Being a GTS, his new car comes with LeMans racecar style centre-lock alloy wheels in glistening black which show off the red calipers on the platter-sized brake rotors.

Like most new Porsche owners, Tenuta added a few extras — one of them being the signature Guards Red paint job because he wanted the body color to match the rotors.

“I didn’t know this was number 999,999 until I got a call from the dealership … and I was quite surprised,” Tenuta said.

He said he typically only drives his Porsches sparingly for fun, usually not more than 2,000 km a year.

Asked where he was going on his first drive, he said, “straight over to show my dad”.