More of an SUV than a minivan, the Pacifica adds all-wheel drive, subtracts folding front armrests

When the Windsor, Ont.-built Chrysler Pacifica was first launched for 2017, it drew raves for its slick styling, interior innovations, disappearing second row seats, and its unique Hybrid model, which remains the auto industry’s only plug-in hybrid minivan. There’s still not even a regular hybrid minivan on the market yet.

Yet there was one option it didn’t offer that kept coming up in media questions in an automotive market where SUV sales kept climbing, in contrast with minivan sales, and that was all-wheel drive. In brief: it wasn’t only that Toyota has offered it for many years on its competing Sienna minivan, but that it was such a key marketing element of similarly priced SUVs that were eating into the minivan market in general.

For 2021, Chrysler will offer an all-wheel drive option on almost all its Pacifica models, and it’s the key update for the company that has made the refined minivan more “UV-ish,” said Mary Ann Capo, Sr Manager – Fiat & Chrysler product. “That’s our game changer right there,” she said. “We’re the only minivan on the market where the seats go into the floor in a matter of seconds,” a clear shot at the Sienna AWD’s adjustable but far-from-disappearing second row. 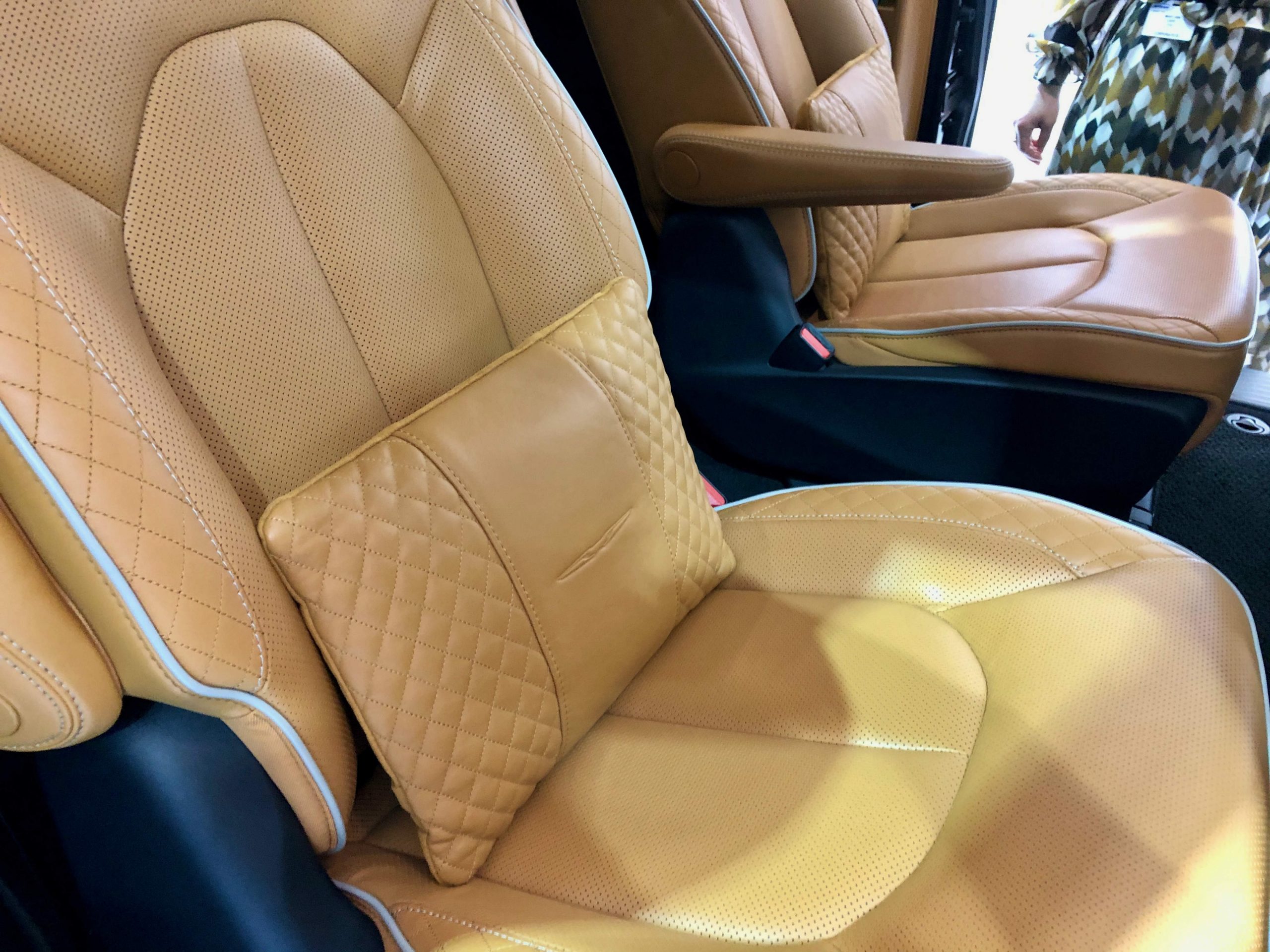 The all-wheel drive does take up some underfloor real estate, she said, so there was some work involved to keep the Pacifica’s signature second row seats that can flip and fold down into large bins under the floor.

“At some point in time people thought we wouldn’t be able to maintain our second row “Stow ‘N Go seats (with AWD), but we did,” she said.

That underfloor real estate is used by the large lithium-ion batteries in the Hybrid model, she said, which is why all-wheel drive won’t be available on the plug-in model. Capo also confirmed that there will be no change to the Hybrid’s powertrain, or its rated 51 km electric range, before it reverts to its normal gas-powered hybrid operation for a total possible range of roughly 835 km. Most Pacifica models will continue to be powered by the standard 3.6-litre Pentastar V6, which also remains at 287 hp and 262 lb.-ft. of torque.

The visual changes reside in the front and rear ends of the Pacifica, where the larger new grille becomes more rounded and less horizontal, and now set off by standard LED headlamps and taillamps, plus revised front fog lights that will allow Pacifica watchers to spot 2021 models easily.

A new Pinnacle trim level lands as the top of the line model, which will feature unique quilted Nappa leather seats all around, including leather ‘lumbar pillows’ for second row passengers, and a unique Ultra console that increases total storage to a class-leading 227.6 litres. 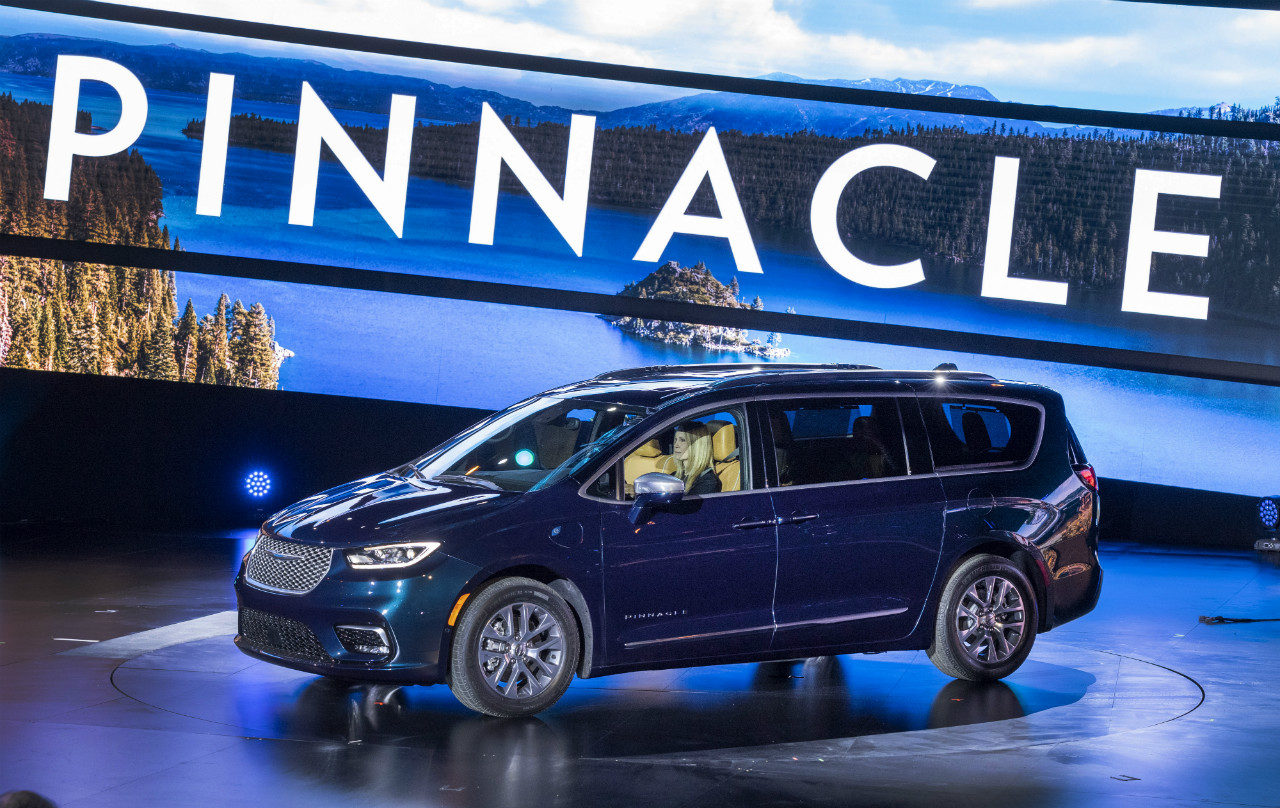 New features for 2021 will include wireless Apple CarPlay and Android Auto options, the ability to connect two phones with Bluetooth at the same time, built-in Amazon Alexa capabilities, new USB Type C ports to go along with multiple regular USBs, and a unique FamCam interior camera, which allows for multiple views into every rear seat, including a view into rear-facing child seats and “zoom to seat” features.

What I found most surprising inside, however, was that all 2021 Pacifica models would lose the minivan-staple folding centre armrests. All the Pacifica’s contre consoles have been redesigned with integrated inner armrests, as most SUVs and pickup trucks currently use. And that’s a common theme throughout the Pacifica’s freshening.

“From the exterior and interior, we’ve gone more crossover, we like to say ‘UV-ish,’” she said, noting how the Pacifica’s sliding side doors and fold-away seats still offers more practicality and flexibility than any SUV. “The minivan really is the ultimate family hauler.”

Speaking of model names, Chrysler is still somewhat confusingly calling its plug-in hybrid Pacifica the Hybrid model, even though the ‘hybrid’ name is one generally used to refer to a less electrified technology that doesn’t use electricity from the power grid (or solar panels, or any other outside-the-car source). To be clear, there is no Pacifica Hybrid that can’t be plugged in.

Prices haven’t been announced for the 2021 models yet, including the new top-range Pinnacle, but for 2020, the top Pacifica Limited starts at an MSRP of roughly $55,000, with a base Pacifica L priced closer to $38,000.

By Michael Bettencourt / Special to wheels.ca