Another Canadian, Robbie Wickens, says he’s sorry he won’t be able to do big race beside his friend and teammate, James Hinchcliffe

INDIANAPOLIS – Formula One World Champion racing driver Lewis Hamilton has millions of fans around the world but Canadian Indy 500 driver Zachary Claman DeMelo isn’t one of them. “Growing up, I really admired Lewis Hamilton,” Claman DeMelo told Wheels.ca during an interview at the Indianapolis Motor Speedway Thursday, “but then I met him and I threw that out the window. He was not a nice guy at all.”

Claman DeMelo, a 20-year-old speedster from Montreal who qualified 13th in the field of 33 for the “Greatest Spectacle in Racing,” said he’d met the world champion on multiple occasions and every time the story was the same.

But Claman DeMelo said the four-time world champion’s disinterest was really a blessing in disguise.

“Now, when I see a fan, especially a kid, I make time for them, he said. “I remember when I was 8 and how crushed I was to be ignored. I don’t want that to happen to anybody coming to see me.”

Claman DeMelo and the second Canadian scheduled to start Sunday’s 500, Robert (Robbie) Wickens of Guelph, met the media Thursday afternoon at the Speedway along with the rest of the starting field that will get the green flag for the start a little after noon EDT. The pre-race show can be seen on Sportsnet 1 and Sportsnet 360 starting at 11 a.m. 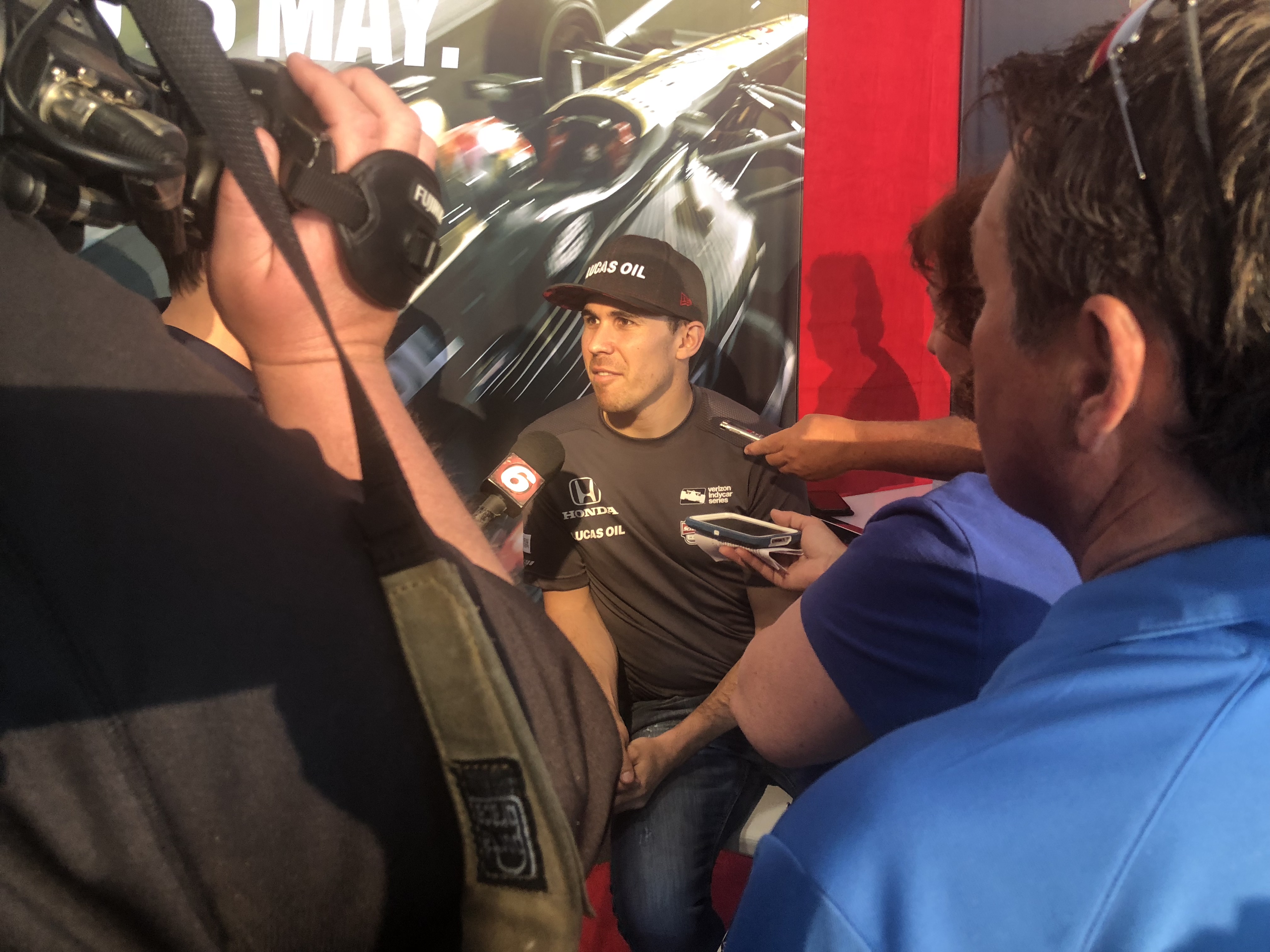 Both Canadian drivers are rookies and neither had seen the Indianapolis Speedway before arriving for practice and qualifying at the beginning of the month. James Hinchcliffe of Oakville, the third Canadian driver entered in the classic, failed to qualify during time trials that were held last weekend.

Claman DeMelo, who only has a part-time drive this season with Dale Coyne Racing, was supposed to sit out the 500 but was called to action when Pietro Fittipaldi, grandson of the legendary Emerson Fittipaldi, who shares the car with Claman DeMelo, was injured and unable to race.

Wickens, who is Hinchcliffe’s pal as well as his teammate, said he’d been scheduled to attend the race as Hinchcliffe’s guest three years ago but it didn’t happen because the Oakville driver had been seriously injured in a practice crash and nearly died.

“I got to Indianapolis but instead of going to the track, I went to the hospital,” he said. Reminded that he’d met his fiancé at the airport while flying in to visit his friend, Wickens quipped: “His pain was my gain.”

But he’s still a “rookie at Indy and expects to tread lightly when the race actually gets going.

“With it being the first one, I want to keep my nose clean and be somewhere around the top ten when the race winds down. I want to be in a position to win, if possible.”
Wickens said that although Hinchcliffe won’t be in the race, he anticipates that he’ll still be a big help.

“He’ll be on my timing stand during the race and I expect we’ll talk about what I might expect between now and Sunday,” said Wickens, who raced in the German Touring Car Series (DTM) for Mercedes in recent years after winning several open-wheel championships in Europe.

The Guelph native said he didn’t feel any pressure with the weight of Canadian pride resting on his and Claman DeMelo’s shoulders. “James has carried that load by himself for a few years now,” he said, “and it would have been nice to run my first 500 alongside my teammate and good friend but it wasn’t to be. “He’s a professional and a class act. What happened on the weekend was devastating for the whole team but Sunday morning at 9, he was in the engineering meeting like he always is, giving his input, knowledge, expertise and experience and moving forward.” 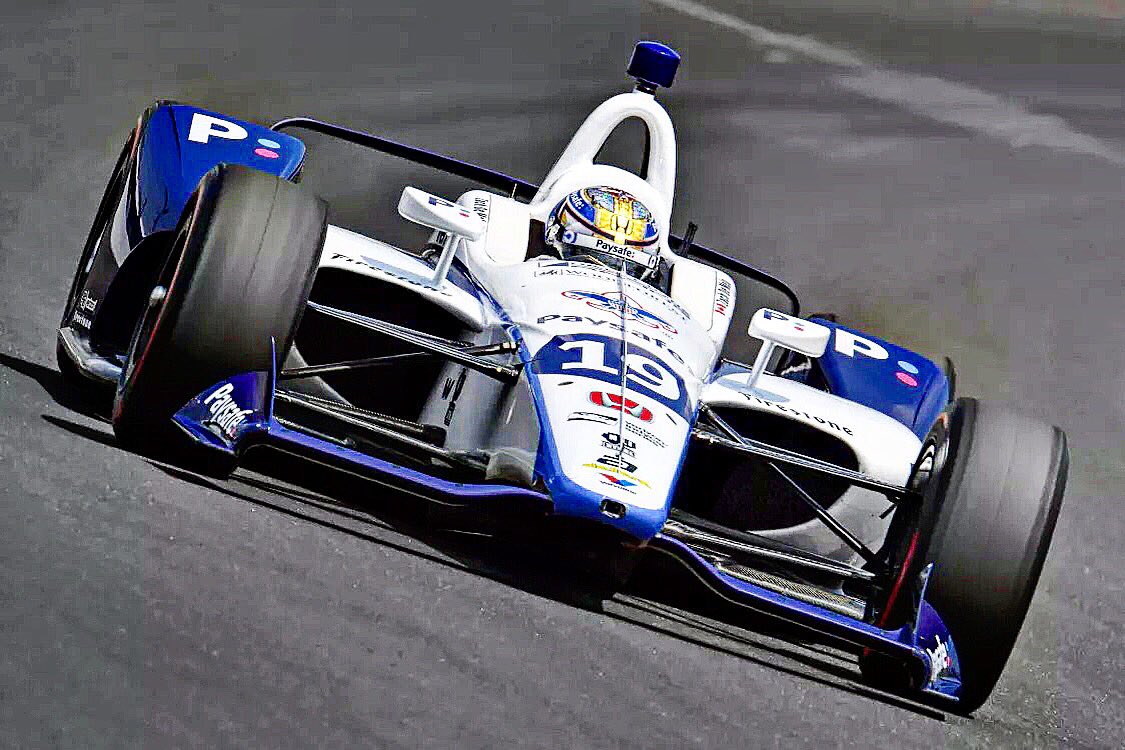 Wickens said Friday’s one-hour “Carb Day” practice session will be critical for his chances, seeing as how he crashed while practicing earlier this week.
“I had a bit of oversteer and thought I had it (the car under control),” he said. “But I brushed the wall and the right-rear suspension collapsed and then it broke when I went into the wall the second time. The car is fixed and ready to go so I’m looking forward to the last practice tomorrow.”

Claman DeMelo said he’s super excited to be starting the Indy 500, which he considers – along with the Grand Prix of Monaco – to be the two biggest auto races on the planet. “Most drivers work their whole life to get here, so to do it at the age of 20 is pretty special for me,” he said.

He said he had little time to prepare – he couldn’t get to Los Angeles or London to get in some simulator work in advance of arriving at Indianapolis – because “it was supposed to be Pietro’s race. But I was comfortable right from the start. If it was hard on anybody, it was the engineers because I wanted to go fast right from the start and they wanted me to build up to it slowly. They didn’t take away the downforce on the car as quickly as I wanted them to.”

Claman DeMelo said he didn’t worry about being in shape to go 500 miles because he keeps himself in top condition. “I work out in the gym for two hours every day and then I really like boxing and I do boxing – the workout, the sparring, everything – for at least another hour. I really like boxing.” Asked if he’d ever been hit hard by another boxer, he laughed and said: “I’ve been nailed a few times but I think I’m already crazy driving around this speedway at 240 miles an hour so it can’t really do me any harm.”

Claman DeMelo said he always has a plan for the first lap of the race but that it rarely works out the way he wants it to. “If I see a hole, I’ll go for it,” he said, “but I don’t want to take any chances because if I want to win this race I have to be around at the end. In fact, I think right now that I’m going to win and I plan to have a big glass of cold milk to celebrate” – a reference to an Indianapolis tradition of the winner being handed a bottle of milk in Victory Lane.

He said he hasn’t given up on a dream of one day racing in Formula One but that he’s happy where he is now in the IndyCar series and he’ll see how that works out for him.
“I live a day at a time to go racing and a year at a time in my career. If something happened that would take me to F1, I would think about it at the time but I am really happy where I am now and I look forward to continuing to race in IndyCar.”