Look back far enough through any car maker’s pedigree, and you’re sure to make some surprising discoveries. Most auto enthusiasts know that Lamborghini had its origins in farm equipment– its name attached to tractors long before the raging bull adorned the aquiline snout of an Italian exotic.

But it may come as a surprise to learn that one of the fiercest and most successful military vehicles ever built owes its existence to a small factory in Zuffenhausen, Germany, better known for sportier vehicles. The Leopard 1 Main Battle Tank was originally designed by Porsche, builder of what’s widely considered the world’s finest handling sports cars. Produced for a multi-national tank program established in the 1950s, the Leopard 1 MBT became an important element in Canada’s own armed forces. And thanks to its explosive popularity at the Canadian International Auto Show last year, the Ontario Regiment Museum has returned this year – and the star of its display is a Leopard tank that saw active duty in Afghanistan in 2006.

The Leopard 1 MBT was developed for a multi-national program established in 1956. Those purchased by Canada in the late 70s–127 in all– were designated Leopard C1 and stationed in Canadian Forces Base Lahr, West Germany and CFB Gagetown. Its user-friendliness, reliability and superior accuracy made the Leopard C1 extremely popular with Canadian troops, who won NATO’s annual tank gunnery competition in 1977.

Eight of the Leopard C1s returned to Canada when CFB Lahr closed in 1993 and were upgraded with additional armour. Two of these were then shipped out to Bosnia as support vehicles, fitted with mine ploughs, rollers, or dozer blades. By 1999, the aging tank was due for an overhaul, and with new cast rather than welded turrets, superior gun sight and additional turret armour, was renamed the Leopard C2.

In the fall of 2006, Canada sent a 15-tank squadron of Leopard C2s (with 5 spares) to Afghanistan to support Canadian troops in Kandahar. Subjected to intense heat, and pummelled by Taliban rockets, the C2 was clearly out of its element. The Leopard 1 tank family needed better protection against land mines, improvised explosive devices and the sweltering desert heat. Upgraded tanks received a mine underbelly protection plate, heavy composite armour, thermal sights, fire supression system and air conditioning and thermal insulation to help protect the crew from the intense heat. Remaining in Afghanistan until 2011, the Leopard C2’s five-year deployment there was the only time it saw active combat. By this time, the Leopard 1 had been replaced by the 60-ton 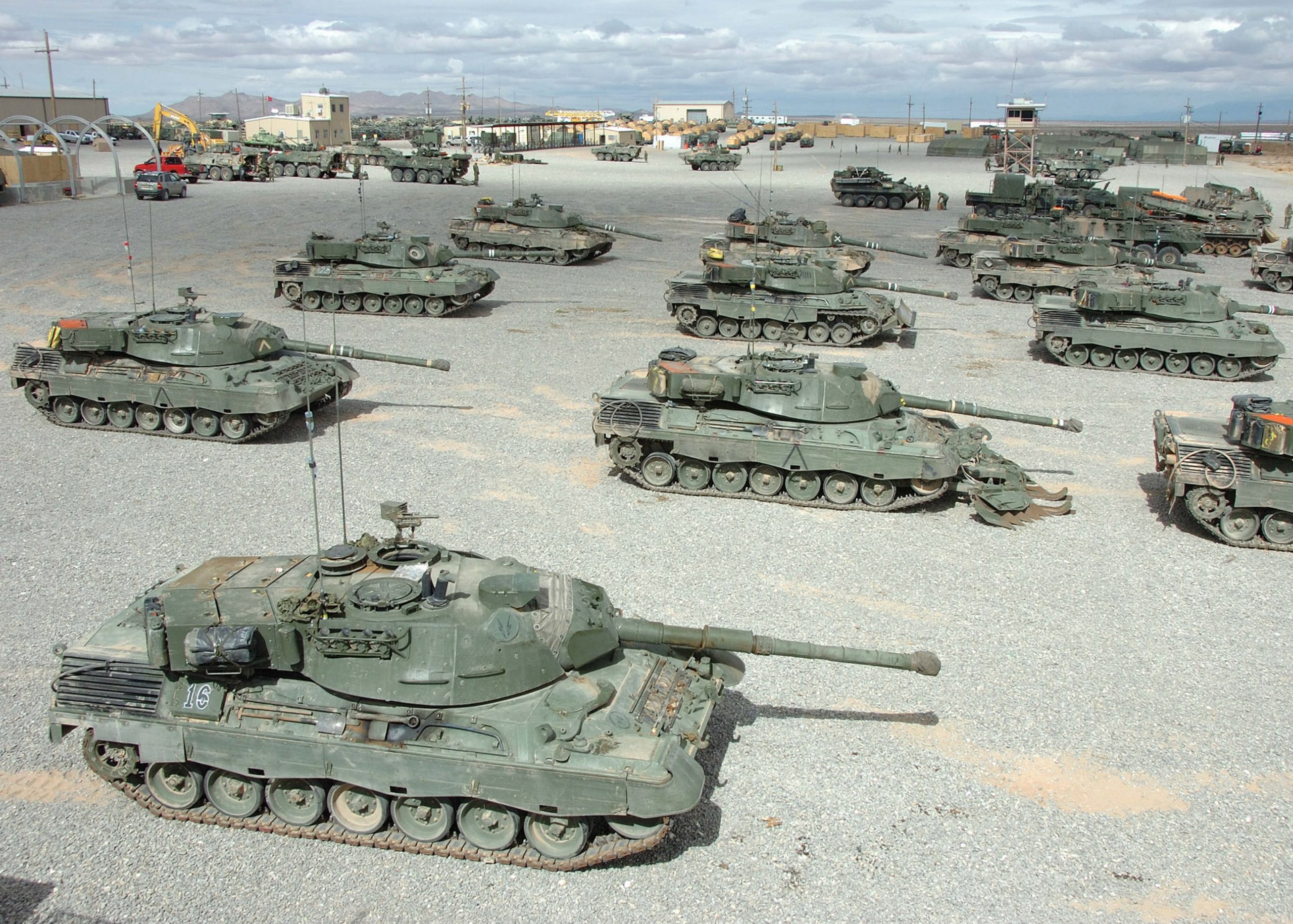 Leopard 2, a larger, faster and heavier version than its predecessor. Rather than upgrade the aging C2, the Canadian government opted to replace it with the state-of-the-art Leopard 2, and after 40 years in service, the Leopard 1C2 was retired in 2017. Sadly, Canada’s plans to sell the fleet to the Jordanian army fell through, and the fate of 50 surplus Leopard 1C2 and 11 Leopard 1 tanks, located across the country at CFB Gagetown, New Brunswick, CFB Montreal, and CFB Edmonton is undecided. A dozen of these will find their way into museum collections, or on permanent display in front of government or military heritage buildings. The rest could end up being used for target practice for Leopard 2 gunners, or sold for scrap.

As for the auto show’s star attraction – the Leopard 1 C2 was deployed to Afghanistan in 2006 and now resides permanently in the Ontario Regiment Museum. Fully restored to its original condition, the tank weighs 42.2 tons and is operated by a four man crew; commander, gunner, loader, and driver. It boasts a 10-cylinder diesel engine with 830 hp and a top speed of 65 km/hr. Both engine and transmission are contained within one block, which is designed to be replaced in 20 minutes in the field. Visitors to the display can buy tickets and become eligible to win a ride in the massive Leopard 2, which will return to the Oshawa-located museum when the show is over.