Can you get a ticket for eating (or drinking) while driving?

Eric Lai explains why this bad habit could cause major indigestion

Q: The other day I saw an SUV weaving about, but still staying within her lane. As I passed, I could see the driver was concentrating on eating lunch with her right hand, rather than driving.

Would eating or drinking coffee (or other non-alcoholic beverages) while driving violate the new distracted driving legislation?

Under Ontario’s ban on hand-held devices while driving, which took effect in October 2009, it’s illegal for drivers to talk, text, type, dial or email using hand-held phones and other communications and entertainment devices. It also prohibits drivers from viewing display screens unrelated to the driving task, such as laptops or DVD players, while driving. The use of hands-free devices is still permitted, and drivers may use hand-held devices to call 9-1-1.

“Hands-free” use means that apart from activating or deactivating the device, it is not held during use and the driver is not physically interacting with or manipulating it. Actions such as dialing or scrolling through contacts, or manually programming a GPS device, for example, are not allowed.

While the eating scenario you describe would not lead to a charge under the distracted driving law, it could lead a police officer, at his or her discretion, to charge the driver with careless or even dangerous driving.

Drivers who endanger others because of any distraction including food, hand-held and hands-free devices may be charged with careless driving and, upon conviction, will automatically receive six demerit points, fines up to $2,000 and/or a jail term of six months. In some cases, your licence may be suspended for up to two years.

You may even be charged criminally with dangerous driving and could face up to a $2,000 fine and jail terms of up to five years. 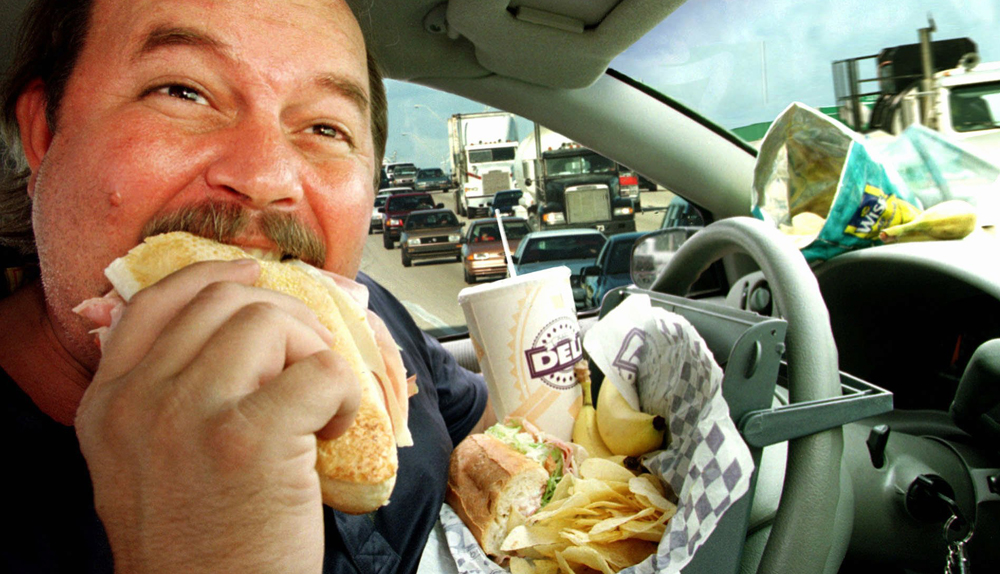 Criminal charges are most likely in cases of serious injury or death.

While eating or drinking non-alcoholic beverages while driving isn’t specifically prohibited, common sense should prevail. Besides distracting you from the driving task, you’re less able to make emergency evasive maneuvers to avoid a crash if you’ve got a messy hamburger occupying one hand, for example.

At present, drivers can legally take an occasional sip of coffee as long as their driving isn’t affected. But if we start rolling up the rim while driving and get into massive crashes, the government would then be obliged to take legislative action. So, basically, it’s up to all of us to either act responsibly or lose the privilege.

Information above is of a general nature and shouldn’t be taken as legal advice or opinion.

Opinion: The Small Pickup Is Back – For Real Th