Here’s a statement that doesn’t need any “arguably” or “likely” qualifiers: the Mustang Mach-E is Ford’s most important new vehicle launch in years.

The Blue Oval has put a whole lot of eggs into this basket. It’s emblematic of the company’s commitment to an electrified future, but in doing so it’s also throwing down the gauntlet on one of the most iconic performance nameplates in history. Any way you slice it, this car is a Big Deal. Missteps simply cannot be afforded.

And now, smack in the middle of getting the Mustang Mach-E ready for launch, COVID-19 lands – and just about everything about the way we’re used to working becomes impossible.

Can development continue on a deeply important product when every engineer assigned to it suddenly needs to work from home?

The Ford team says the answer is yes – partly through innovation, but partly through an incredible stroke of timing luck. Development on the base Mach-E was completed and rubber-stamped in early February, so the only concerns there are in potential production delays, the impact of which hasn’t yet been determined. It’s the GT model that the vehicle engineering teams are working on today, and it just so happens that the prototypes left the factory in Dearborn before it was shut down.

“Although it’s unfortunate what’s happening, it was actually a good point for us to be able to continue our development work (off-site),” says Rob Iorio, Mach-E vehicle engineering manager. “It’s the sprinkles on the sprinkles in terms of building the cupcake. It’s already baked and frosted.”

The three engineers highlighted below, along with many others, have rebuilt their offices at home – in some cases transporting work benches and parts, and in others parking entire working prototypes in their driveways – and are battling distance and distractions to keep development of the Mustang Mach-E on track.

Iorio and his team are responsible for the big picture of the Mach-E’s development, analyzing how all its parts come together to create a whole. These engineers typically work in groups, which is clearly not possible right now.

Instead, Iorio and his team are working individually, sharing their experience and input online through photos and video. This isn’t as easy, he says, but cohesiveness in the team is getting the job done. 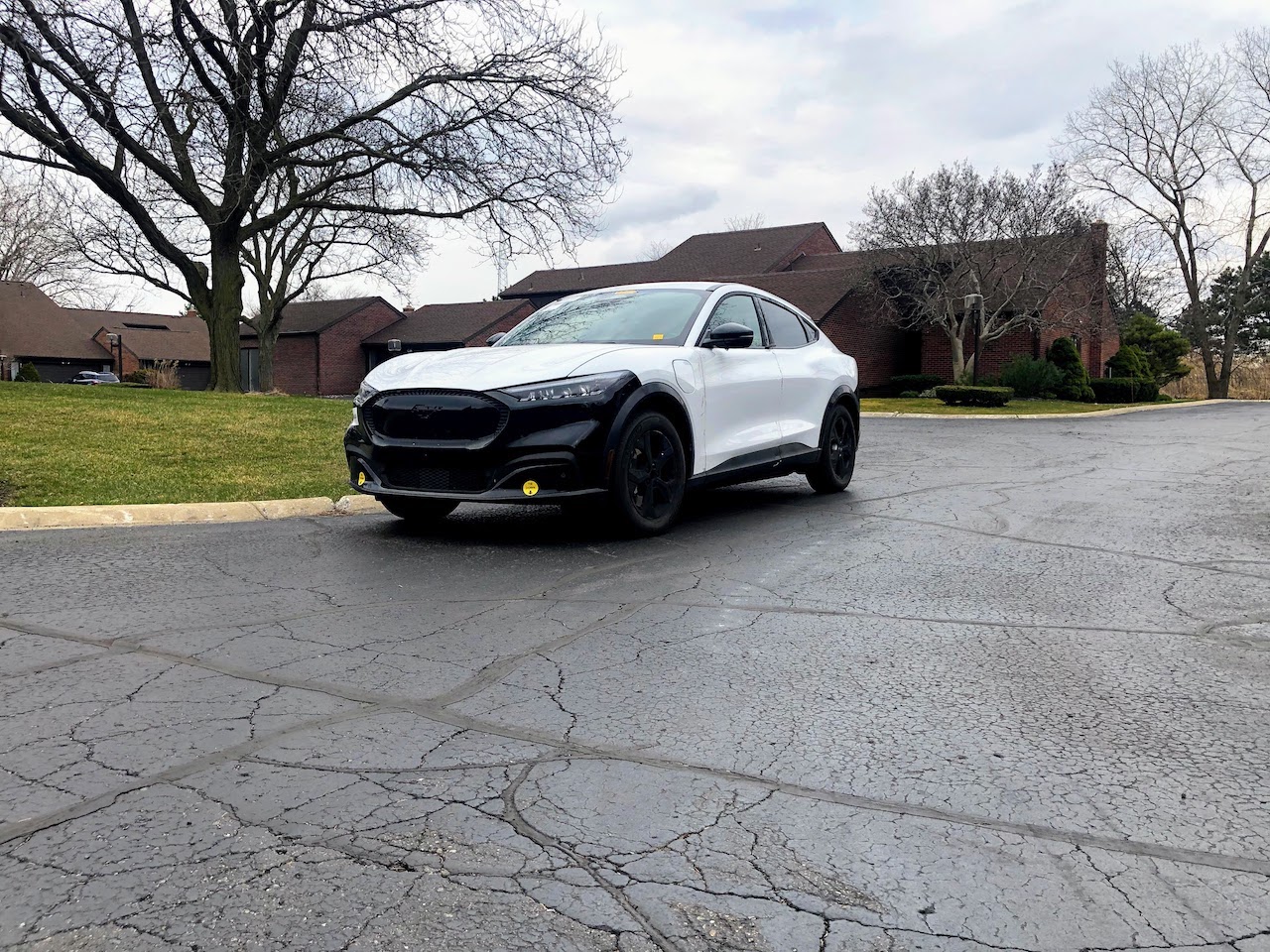 “We have to trust each other,” he says. “If one person is in a car and communicates what they think is a good thing or an opportunity, we have to trust that they’re following procedures, that we’re all professionals. We’ve learned through years and years of vehicle development.”

Extreme weather testing has been a particular challenge. Typically, teams will travel to northern and southern locations to test prototypes in varying weather conditions. Getting that testing done has required more resourcefulness than usual.

“Arizona is shut down now, but until that time we were able to have people in different regions handle some testing we couldn’t do.”

The Mustang Mach-E will launch with the newest iteration of Ford’s SYNC infotainment software, which Dakroub and his team are developing. They’re already used to working remotely since his group is based in Dearborn, Michigan, and also has team members working in Waterloo and Ottawa.

While this might lead one to assume that the infotainment team had the easiest transition to working from home, in some ways they were the ones who encountered the greatest challenges. Many of them had to relocate significant amounts of hardware out of their offices, for example.

“One of the physical things that we had to move into our homes is the desktop (computer) systems that are more powerful than laptops,” he says. “Also, we have benches of the centre stack of the Mach-E that we can test and validate stuff on without jumping in a vehicle. 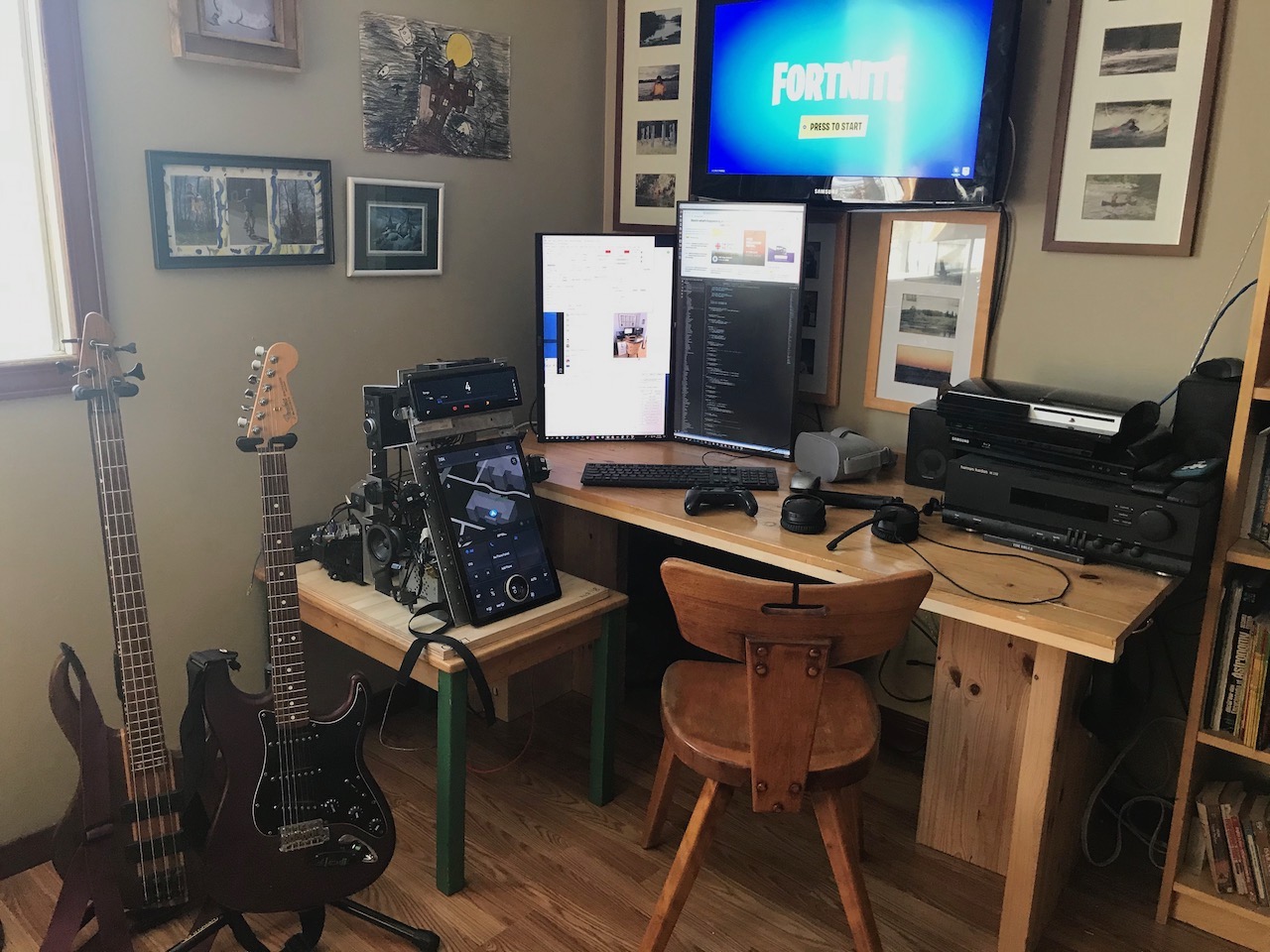 “Personally, I have a new vehicle that’s retrofitted (like) a Mach-E from the inside that I sit in … to validate software on the vehicle.”

Dakroub says that one of the early pain points that needed to be overcome with working remotely is that residential internet connection speeds were hampering workflow.

“Some of the team members had bandwidth issues at their homes,” he says. “If someone’s home network is not sufficient, we are able to support them and upgrade to a higher bandwidth to ensure their productivity.”

Kapur and her team are responsible for testing and calibrating the Mach-E’s powertrain. The Mach-E prototype vehicles they’re using would typically stay on or near the Dearborn campus under strict supervision, but they’re now parked in driveways where engineers use their laptops and other tools to interact with them and communicate their findings to one another remotely.

“My team is still continuing with testing, whether that be around the block of their neighbourhood or things that can be done statically in their driveways,” Kapur says. “It’s been a change nonetheless, but we can continue to get in the vehicle, see how the powertrain is performing, and respond accordingly.” 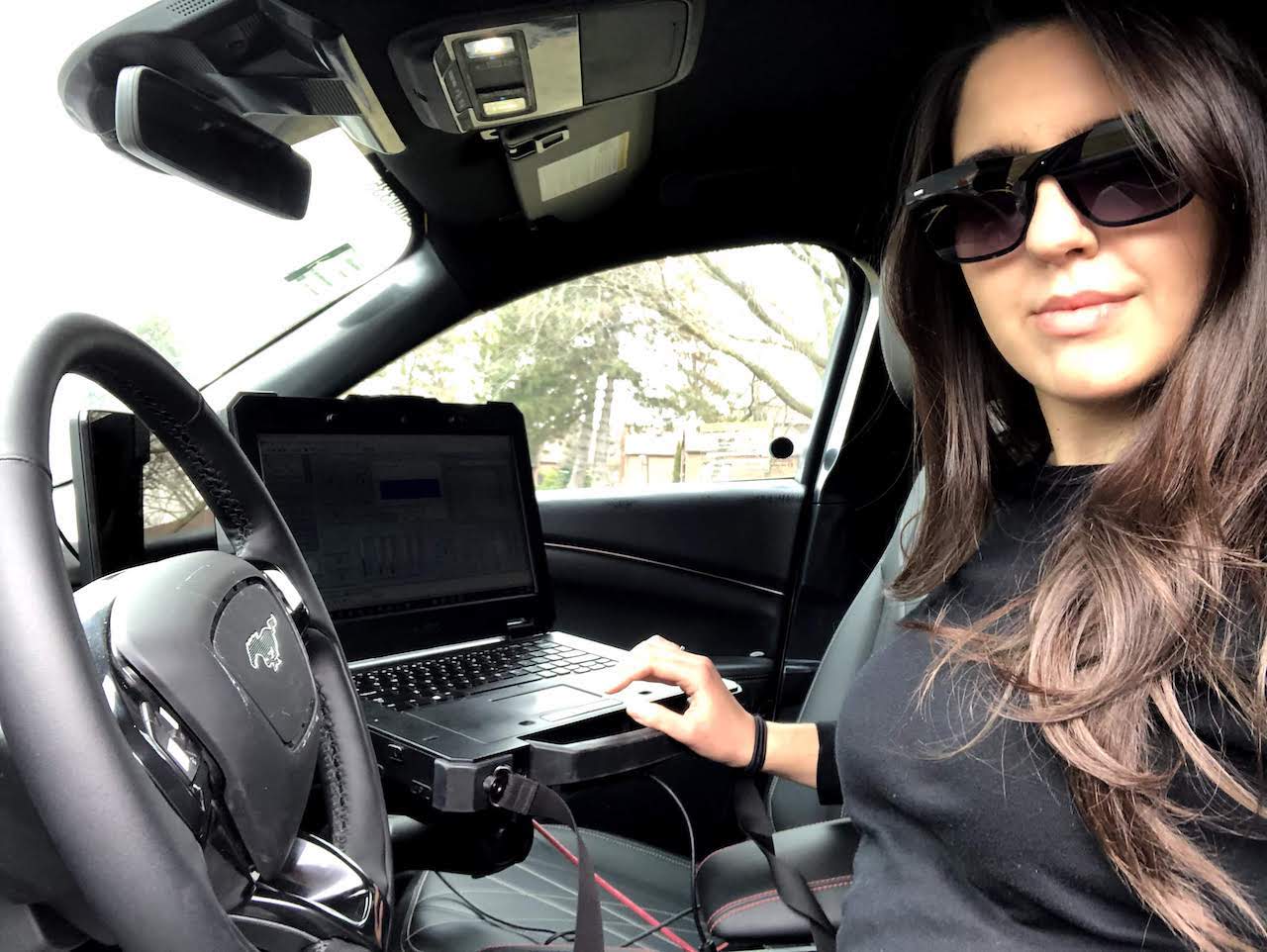 Each of the prototypes has different instrumentation or different hardware installed that can typically be accessed on demand. With the prototypes scattered across subdivisions, it’s taking strong communication to share the information the team needs.

“I can reach out to my fellow colleagues and be like, ‘hey, I know you have this prototype, can you get this data for me?’” Kapur says. “While we’re not getting in the car we want as quickly as we want, we’re still getting the data we want.”

One major adjustment Kapur is dealing with is that the Mach-E is a battery electric vehicle. She doesn’t have a Level 2 charger at home, so when the battery is drained, recharging it isn’t as easy as getting to a gas station.

“We still have access to external facilities at our Dearborn campus,” she says. “There’s quite a bit of charging infrastructure on site that is accessible without having to go near anybody, enter a building, or having to interact with anybody too closely. We still are able to recharge that way and continue testing.

“This whole situation has maybe subconsciously forced us to think identically to how (an EV) customer would be feeling at this time. I’m sure that’s valuable experience we’re getting out of this.”